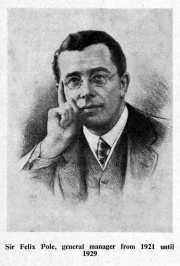 1877 February 1st. Born at Little Bedwyn, Wiltshire, the second son of Edward Robert Pole, the local schoolmaster ,and his wife, Emma, the youngest daughter of Charles Clewett of Wincanton, Somerset.

Attended school in the villages of Little Bedwyn and Ramsbury.

Joined the GWR as a telegraph lad clerk

He was rapidly promoted and in 1904 was working in General Manager James Charles Inglis's department in the headquarters at Paddington Station working on the railway's marketing campaigns.

1899 Married Ethel Maud (d. 1966), the daughter of Horace Flack, a shoemaker in the West End of London. They had one son and two daughters.

1929 July. Left the GWR to become the executive chairman of AEI

1945 Resigned as Chairman of AEI

1955 Resigned as Director of AEI

ENGINEERS and industrialists generally will regret the death of Sir Felix Pole, which occurred on Sunday last, January 15th. It will be remembered that he spent nearly forty years in the service of the Great Western Railway Company, of which he was general manager from 1921 to 1929.

Sir Felix, who was born in 1877, joined the Great Western at the age of fourteen and for a start worked in the telegraph department at Swindon. His railway career was a distinguished one, culminating, as it did, in his being appointed general manager in 1921, when he was forty-four.

His grasp of railway practice and his organising ability stood him in good stead, for his years as general manager were those in which the problems following the grouping of the railways had to be satisfactorily solved. There is no doubt that Sir Felix was more than equal to that task. But his expert advice was also sought on railway problems apart from those of the Great Western, and twice he visited the Sudan at the invitation of the Sudan Government to report on railways and steamers. Sir Felix relinquished the chairmanship of the Great Western Railway in 1929 and was then appointed chairman of Associated Electrical Industries, Ltd., in which position he remained until 1945.

During his years in the electrical industry, Sir Felix was called upon for many public services. Among them were membership of the Colonial Development Advisory Committee and the Coal Commission, the chairmanship of the Rural Housing Committee, membership of the Committee on the Fishing Industry, and of the Police Pay (New Entrants) Committee. Sir Felix was also invited in 1934 to report on transport conditions in Northern Ireland. The honour of knighthood was conferred upon him in 1924.