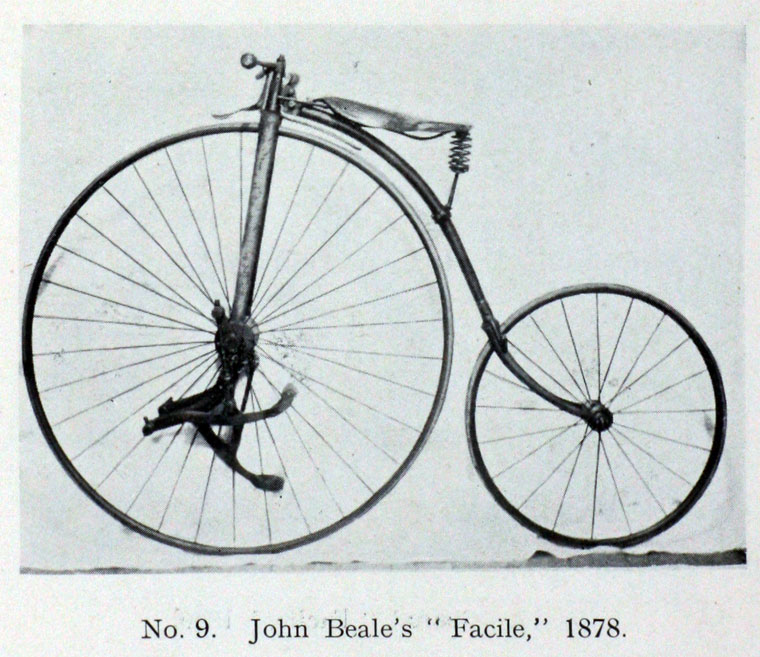 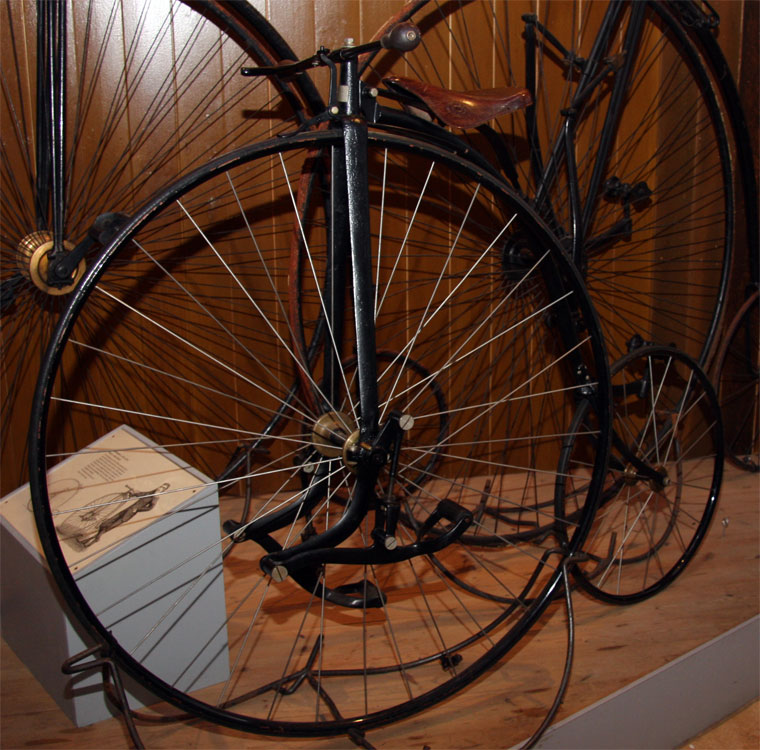 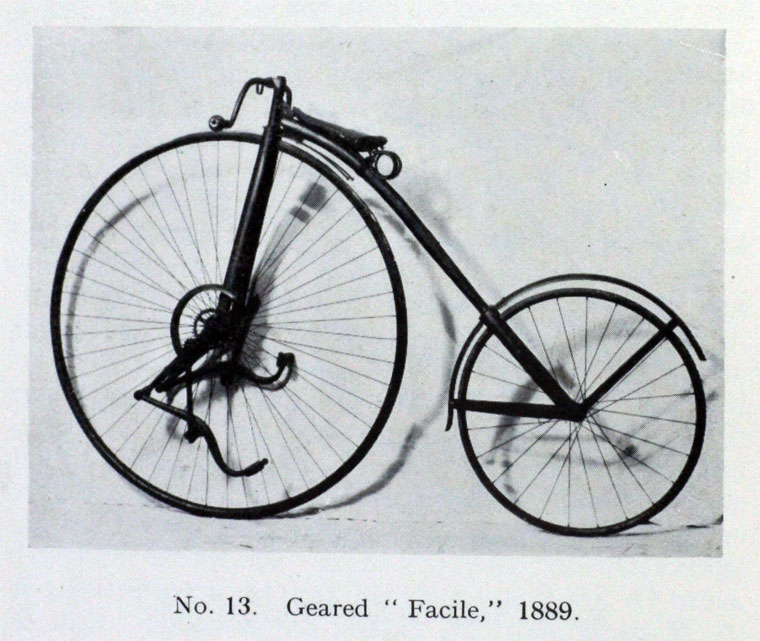 1879 One of the first safety "ordinaries"; made to the patent of Beale and Straw. Front wheel was reduced to 44 inches diameter; levers used to bring the pedals nearer the ground[1].

On a machine of this type W. Snook, of Winchester, won the first 'Facile' 24 hours road race in 1882, covering 214.5 miles. The race was repeated in 1883, when J. H. Adams won with a total of 221.25 miles. These races were organised by the manufacturers of the 'Facile,' and were confined to riders of that make of machine: it is interesting to note that the competitors started at midnight from Anderton's Hotel, Fleet Street, where riders and officials consumed a substantial supper prior to the event.

In 1884 Joseph Harris Adams beat the Land's End to John O'Groats record on a 'Facile,' bringing the time inside seven days: Adams was (and still is!) one of the most popular personalities in the cycling world; he won 10 national championships on the track. Despite his first Christian name he is universally known as Johnny. A personal letter from him is attached to the exhibit.

The 'Facile' was undoubtedly the most successful of the many types of 'safety' bicycle which came on the market prior to the introduction of J. K. Starley's 'Rover' in 1885: it enjoyed considerable popularity and commercial success, and a club composed of its votaries flourished in South London.

This specimen has plain bearings throughout; it was purchased in Herne Hill, and weighs 43 lbs.[3]

No. 12. (No image) Racing Model Geared ‘Facile’ bicycle, manufactured by Ellis and Co., 47 Farringdon Road, London, E.C. and introduced in the autumn of 1887. This was a greatly improved development of the older un-geared ‘Facile,’ made by the same firm, who had moved from 163 Fleet Street during the intervening period.

On a geared “Facile” fitted with early Dunlop tyres (the type which was solutioned to a nearly flat rim, the late F. W. Shorland in 1890 beat the coaching record which had been set up by the famous Jim Selby (with the aid of 64 horses!) on 18th July 1888, from Hatchett's Hotel, Piccadilly, to the Old Ship Hotel, Brighton, and back: Selby's time was 7 hours 50 minutes. Shorland's time was 7 hours 19 minutes. Accompanying this exhibit is a letter from Shorland of which the following is a copy:—

“My dear Bartleet, I am so pleased to hear that in your collection of bicycles you have a Geared ‘Facile’. This brings back to me very pleasant memories. First of all it was on one similar that I rode from London to Edinburgh in 1889 in 44 hours and 49 minutes, or thereabouts, beating the record by over 10 hours that was only established by my Scotch friend Donaldson about a fortnight previous.

“Also it was on a Geared ‘Facile’ that I rode from London to Brighton and back, I think it was in 1890, in 7 hours and 19 minutes, beating Jim Selby's coaching record, I being the first to reduce the time on a bicycle. You may remember that you were one of the six friends that so kindly paced me on that occasion! In those days the Geared ‘Facile’ was considered to be the last word in mechanical development.

No. 13, is a duplicate of No. 12, except that the front wheel has been rebuilt to take a cushion tyre. This machine has a unique history: it is the actual bicycle which was presented to my very dear friend the late Percy Nix, of the Brixton Ramblers Bicycle Club, by Messrs. Ellis and Co., vide engraved shield affixed to the backbone.

In the year 1888 the bicycle record for 24 hours on the road stood at 294 miles, set up by G. P. Mills as far back as 1885. Modern cyclists will be interested to learn that Mills's record was adjudicated upon by the National Cyclists' Union, prior to the formation (on April 11th, 1888) of the Road Records Association.

When the geared “Facile " was introduced, Messrs. Ellis and Co. offered a prize of a new bicycle and a diamond ring to the first rider of their machine who covered 300 miles in 24 hours. Incidentally, this feat was not accomplished till 1889, when M. A. Holbein covered 324 miles in the stipulated time, riding a 'Premier' bicycle.

However, on 20th October, 1888, P. A. Nix, on a geared 'Facile,' rode 297 miles in 24 hours: Messrs. Ellis accepted this as qualifying for the prize. The presentation was arranged to take place at a supper, held at Anderton's Hotel, Fleet Street, London, on 24th March, 1889, at which Messrs. Ellis entertained a number of celebrities in the cycling world, Mr. Isaac Watts Boothroyd, then proprietor of the firm of Ellis and Co., being in the chair.

By an extraordinary coincidence, the 'hero of the evening,' P. A. Nix, was unable to be present, being laid up with an attack of measles! His brother, Harry Nix, received the prize on his behalf: this consisted of the actual geared 'Facile'.[5]