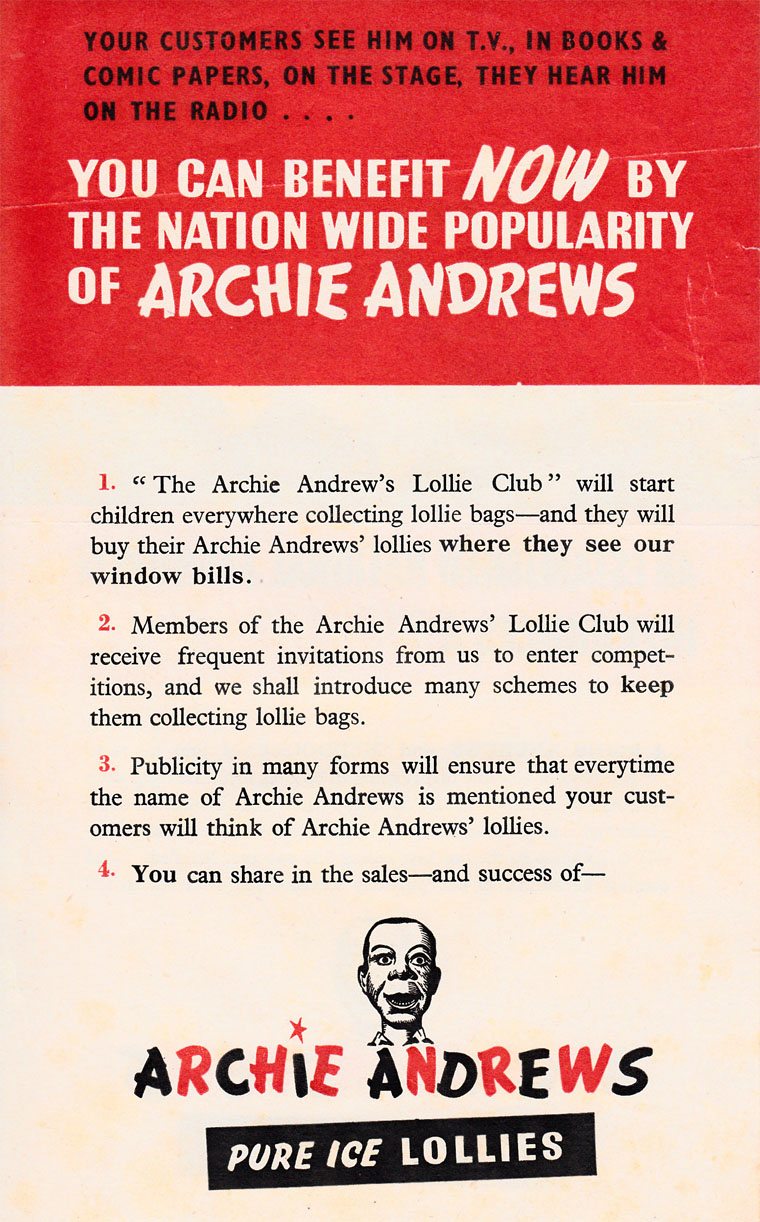 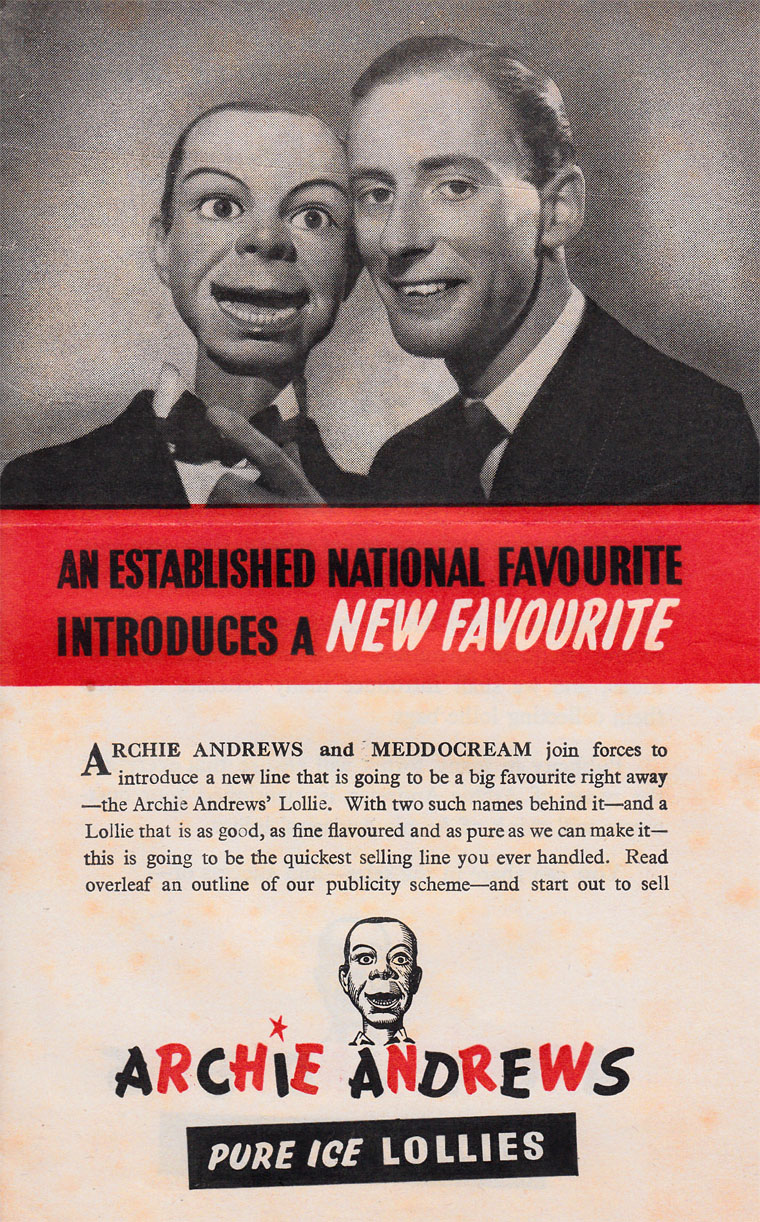 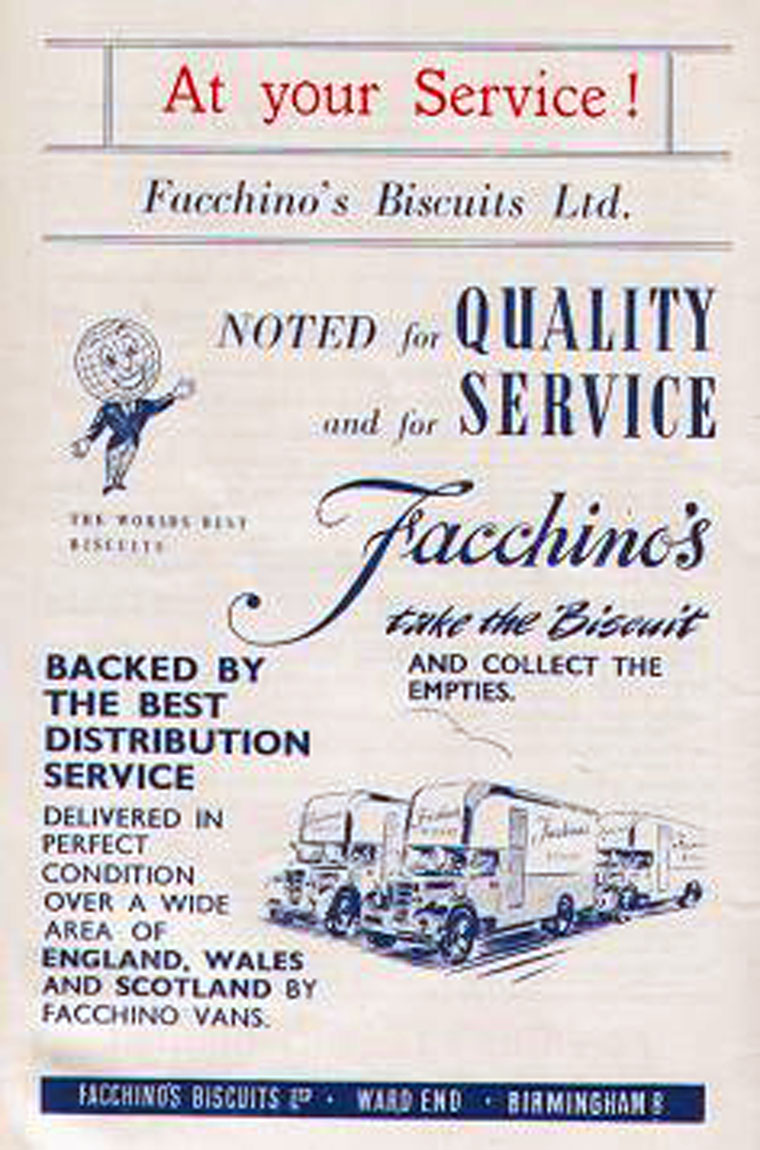 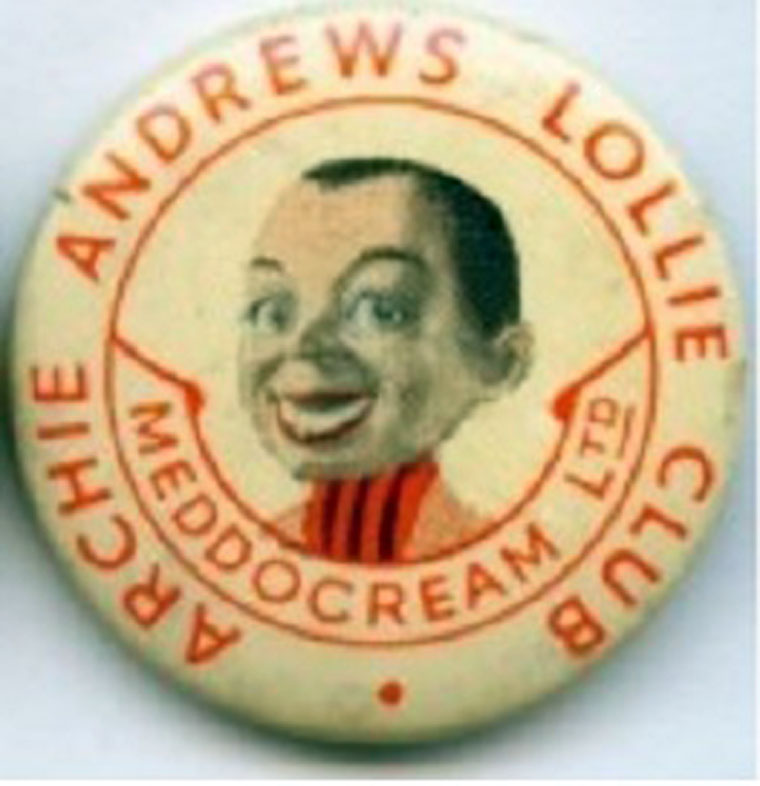 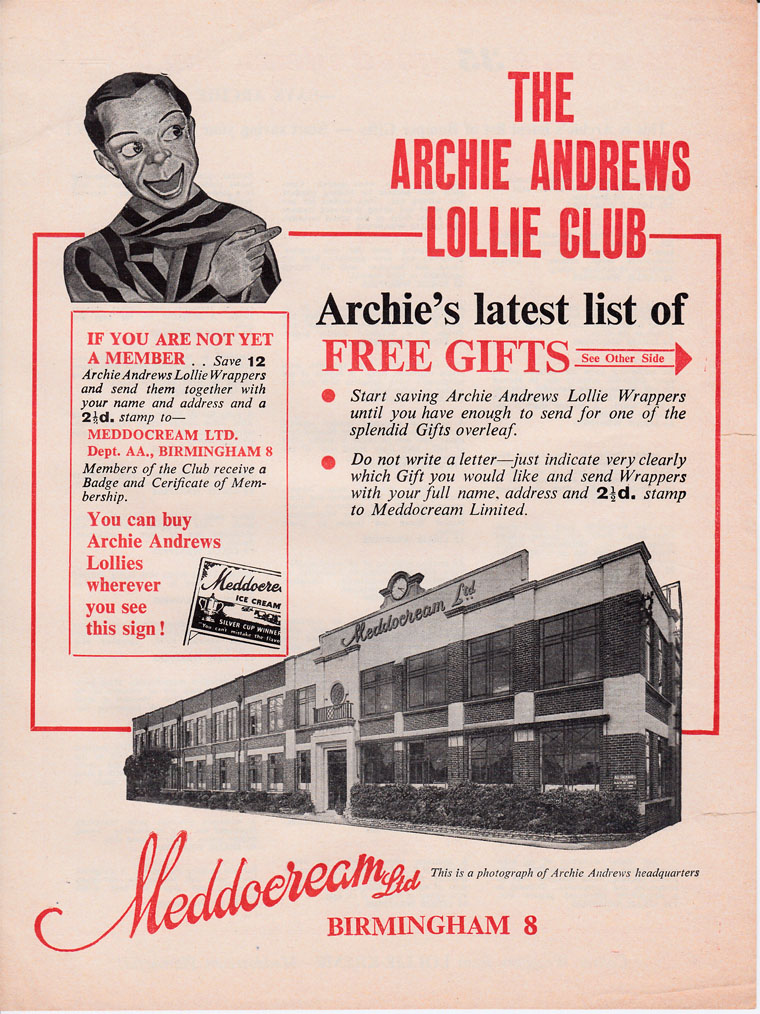 My late father, Harold Gwyn Parsons, worked at Facchino’s from 1940 until the mid 1960s.

According to my birth certificate in 1941 he was “Supervisor of Mechanical Accounts” (Punch Card System) in 1941. He progressed through the Company to become Sales Manager of Facchino’s Biscuits and Meddocream Ice Cream in the 1950s. He was responsible for creating the link between Peter Brough the ventriloquist and his “Dummy” Archie Andrews.

An “Archie Andrews Lollie Club” sponsored by Meddocream was formed whereby “kids” could join by collecting lollipop wrappers, enter competitions and win prizes. I still have my Archie Andrews badge and actually met “him” and Peter Brough at the Birmingham Hippodrome.

Facchinos became a target of successful takeovers during the early 1960s by Westons Biscuits and Neilson's Ice Cream.

My Dad, instead of being a “large fish in a small pool” and not being offered a suitable position with either Firm, decided to become a self employed Ice Cream Consultant.

He also teamed up with Mr Anthony Facchino to set up Tonibell (Correction: Mr Whippy - Ed) – a fleet of mobile Ice Cream Vans.

There were three Facchino brothers, Mr. Clive, Mr. Anthony and Mr Cecil – I was “named” after the first two...

Needless to say I “grew up” on “broken biscuits” which Dad was able to bring home during those wartime rationing days of my boyhood."

Enrico Facchino arrived in Birmingham from Italy in 1898. He was a personal friend of Domenico Antonelli so much so that he named his first child Domenico. Enrico became the Midlands agent for the Antonelli Barrel Organs and after 1912 also became agent for the International Wafer Co. He had access to the factories and home of the family.

In 1918/19 he set up a wafer biscuit factory in Birmingham in competition. When International started baking table biscuits for the grocery market in 1928 he followed and continued for ever copying every move.

The Facchino family were also involved in ice cream products and in 1958 Domenic joined up with Ernest Paccitto (agent for Carpigiani soft ice cream machines) and set up Mr Whippy (not Tonibell). They grew very successfully with large vehicles that had secondary engines to operate the machines. The Ministry of Transport officials started to check and take them off road as being overweight. All Facchino cones were part of the franchise. At the same time Tonibell and Mr Softee were growing. Then Weston Biscuits bought Facchino and almost immediately closed it as a failing business. Anthony then opened a new cone company to supply Mr. Whippy - The Golden Dream Co. Ltd.

Mr Whippy was beginning to get out of hand and was purchased by the Forte Group. It was not long (before) it was realised that they had no future for Mr Whippy and in 1966 Walls took the company over on the understanding that Trust House Forte Group would purchase ice cream from Walls. As Walls had their own cone factory at their Gloucester site, Golden Dream became a ‘nightmare’ because the private sector would not purchase from a family that had attacked the private sector, and that factory closed.