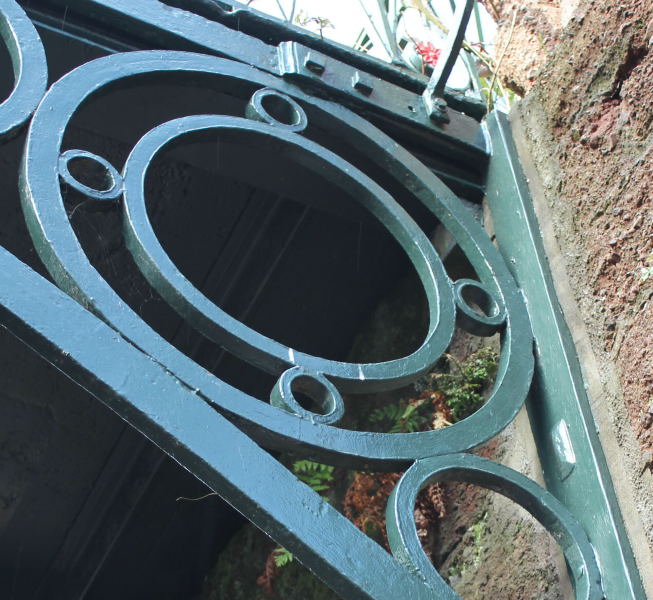 at the entrance to Cathedral Close, Exeter

Some sources state that the arches are cast iron. Cast iron bridges with a 'dimishing ring' motif were popular from the 1790s onwards. However, the arches and rings here are wrought iron, with the letters riveted on. The blacksmith's achievement in producing the spandrel rings to contact the tapering gap and the neighbouring rings is most impressive. Note that the radial width of the rings decreases with the diameter.

The difference between the use of cast iron and wrought iron is by no means trivial. With a cast iron bridge of this size, one or two wooden patterns would have been made for the arches, complete with rings. The patterns would have been used to make sand moulds, and cast iron poured. A relatively cheap and straightforward process. With wrought iron, each rib and ring would have to be made individually. Each ring would be formed from a piece of straight wrought iron bar, rolled to shape, and the joint fire-welded. The diameter needed to be exactly right, to ensure that the ring exactly fitted in with the neighbouring rings and arch members. This was blacksmith's work of the highest order. The material itself would have been much more expensive than cast iron.

The deck has been renewed with steel plates, supported on rolled steel joists.