Grace's Guide is the leading source of historical information on industry and manufacturing in Britain. This web publication contains 147,153 pages of information and 233,401 images on early companies, their products and the people who designed and built them. 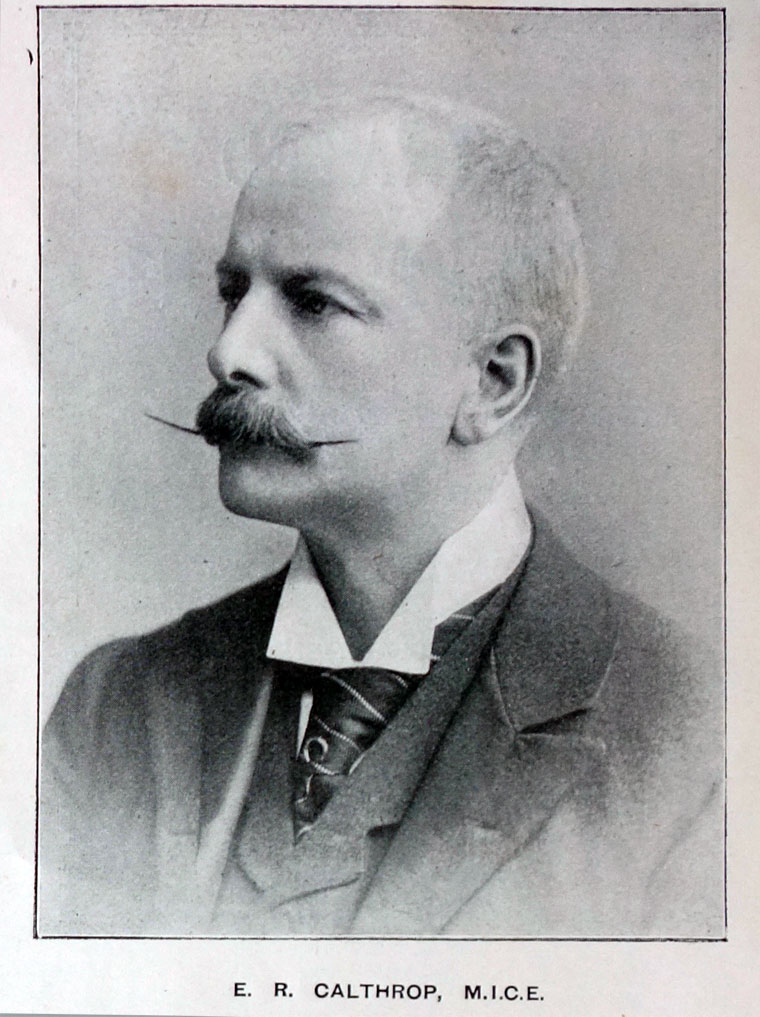 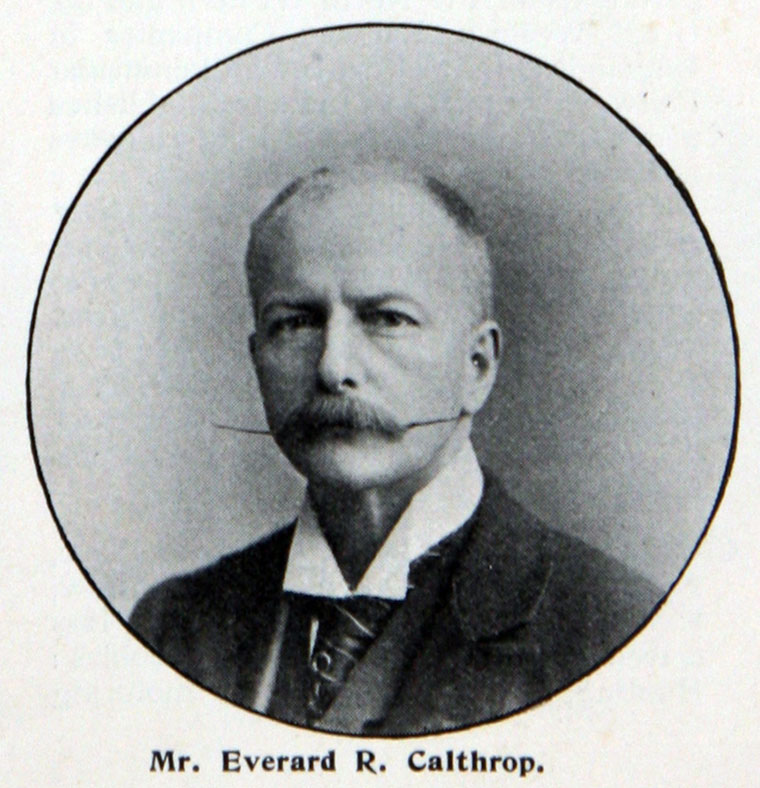 Calthrop was a notable promoter and builder of narrow gauge railways, especially of 2 ft 6 in gauge, and was especially prominent in India. His most notable achievement was the Barsi Light Railway; however he is best known in his home country for the Leek and Manifold Valley Light Railway. Later in life he took an interest in aviation, patenting some early designs for parachutes.

Calthrop was born on the 3rd March, 1857, the eldest son of farmer Everard Calthrop. He had 6 brothers, one of whom was Guy Calthrop, general manager of the London and North Western Railway. The family lived at Deeping Fen, Lincolnshire,where Calthrop was born, and later at Sutton in the Isle of Ely.

Calthrop was educated at Uppingham School.

Calthrop started work with Robert Stephenson and Co and then was apprenticed to the London and North Western Railway at Crewe in 1874.

In 1879 he joined the Great Western Railway, where he rose to assistant manager of the Carriage and Wagon Works.

In 1882 he went to India to join the Great Indian Peninsula Railway as a locomotive inspector.

Once in India, Calthrop came to see narrow gauge railways as a way to help develop the country. This led him to chairing a Government committee to investigate light railways throughout India. He then published a pamphlet entitled A System of Standard Details as applied to the Construction of Rolling Stock in India. As a result of this pamphlet, the Indian Government adopted systems of uniformity of gauge and equipment throughout the country, and eventually adopted 2 ft 6 in gauge as the standard narrow gauge throughout the country.

Calthrop requested leave in 1886 to investigate proposals for independent branch lines. He identified two schemes of particular interest, a 5-mile tramway connecting the Hindu religious centre of Nasik with the railway, and a 21 mile branch line to the town of Barsi. The Great Indian Peninsula Railway approved both schemes, and Calthrop undertook a survey of both lines.

In 1887 he registered the Indian Railways Feeder Lines Company in London to promote the construction of feeders to the railway. The Great Indian Peninsula Railway suggested that he either return to his duties as a locomotive inspector, or, with their support, resign to further promote branch lines. His health was failing, and so in 1889 Calthrop resigned from the Great Indian Peninsula Railway. Working as a consultant he then supervised the construction of the 2 ft 6 in gauge horse-powered Nasik Tramway, using his previous survey.

Returning to the United Kingdom in 1892 Calthrop established a railway engineering consulting practice in Liverpool, where three of his brothers had started a stockfeed company. Soon Calthrop had entered into a partnership with them and spent much of the next two years designing equipment for feed production. He took out a number of patents relating to the equipment and to refrigerated transport.

While Calthrop was resident in Liverpool the Chamber of Commerce was concerned future expansion was being limited by the railway companies that linked that city with Manchester, and invited proposals for alternative methods for moving goods. Calthrop proposed a system of narrow gauge railways linking the two cities, running along streets directly serving factories. His proposal was highly commended, but the proposed street running precluded its adoption.

Calthrop was also interested in road transport. He was a member of the Self-Propelled Traffic Association and in May 1898 was a judge at their trials for "motor vehicles for heavy traffic", held in Liverpool. The winner was a Thornycroft 4-ton steam wagon.

Later he was a foundation member of the Royal Automobile Club (RAC).

1904 CALTHROP, Everard R., M.I.C.E., M.I.M.E., 3, Crosby Square, London, E.C.; "Goldings," Loughton, Essex. Hobbies: Motoring, riding, breeding Arab horses, mechanics. Has held a prominent position in the engineering departments of the North Western and the Great Western Railway Companies in England, and the Great Indian Peninsular Railway in India. In India he established a system of narrow gauge light railways as feeders to the main trunk lines. Is a well-known consulting engineer for light railways and on heavy motor haulage. Takes a great interest in all questions affecting the commercial side of motoring. Was a judge of the Liverpool Trials, 1898. 1899 and 1901. Clubs: L. S. P. T. A. (Founder member), Byculla (Bombay), A.C.G.B. & I. (Founder member, Committee). [1]

During his time in India, Calthrop made occasional trips back to Britain. On one such trip he married Isabel Mary Earle, the daughter of the Reverend Walter Earle, a friend of his parents. The wedding took place on the 19th November 1890 at the Bilton Parish Church, Rugby. They had four children, Everard Earle (Tev, b. 1892), Keith de Suffield (b. 1894), Isabelle Iris (b. 1895), and Betty Marion (b. 1899). Tev joined the army and became a Colonel in the Royal Engineers, while Keith, after a stint in the Royal Engineers went on to become Assistant General Manager and Mechanical Engineer of the Barsi Light Railway, a post he held until 1932.

Developing and promoting his parachute had left Calthrop drained, both financially and physically. Failing health forced him to resign his position as consulting engineer for the Barsi Railway in 1925, although he remained a director.

Calthrop died at his Paddington, London, home on the 30th March 1927, in the company of his son, Tev. He was seventy years old.

CALTHROP, E. R., M.I.C.E. and M.E.- Born in 1857, Mr. Everard R. Calthrop in 1873 started his engineering experiences as a pupil with Messrs. Robert Stephenson and Co., Newcastle-on-Tyne, but having a preference for the railway, entered the London and North-Western Railway Works in Crewe, where he completed his apprenticeship in 1878, then serving for a year as an ordinary fireman with the same company, in order to gain a practical knowledge of the running of trains. After this he successively occupied leading positions with the Great Western Railway at Swindon, the Great Indian Peninsula Railway in India.

Leaving the latter in 1899, Mr. Calthrop devoted himself to the promotion of a system, of light railways of narrow gauge in India as feeders to the main trunk lines. He is a Founder Member of this Club, one of the originators of the L.S.P.T.A., and was one of the Judges at the Liverpool Trials of 1898, 1899, and 1901, his principal pursuits and amusements being riding, taming and painting horses, in which he finds relaxation from mechanical problems.

EVERARD RICHARD CALTHROP was a pioneer and an authority in the construction of light railways and the invention of life-saving appliances for aircraft.

He commenced a fruitful engineering career in the works of Messrs. Robert Stephenson and Company, but preferring railway work, became apprenticed in 1874 at Crewe.

In 1879 he joined the Great Western Railway and was shortly afterwards inspector of stores and materials and assistant manager of the carriage and wagon works.

In 1882 he was appointed assistant locomotive-superintendent of the Great Indian Peninsula Railway. It was at this time that he first considered the provision of light railways as feeders to the main lines. He received special permission from his directors to become chairman of an Indian company formed for that purpose.

In 1887 he published a pamphlet on "A System of Standard Details as Applied to the Construction of Rolling Stock on Railways in India." This resulted in the appointment by the Government of India of a railway committee which reported strongly in favour of uniformity, and the movement for standardization has since extended widely.

Vacating his appointment on the Great Indian Peninsula Railway in 1889, he surveyed and reported upon a number of projected light railways, since constructed, in India. He obtained a personal concession for the Barsi Light Railway and as a result of its success was able to demonstrate the advantages of his system.

In 1892 he commenced consulting practice in England, and of the many light railways which he planned, the Leek and Manifold Valley Light Railway in Staffordshire is an English example. This also embodies his own system whereby standard-gauge wagons are carried over the narrow-gauge lines without tran-shipment of the contents.

In 1916 he turned his attention to the study of life-saving appliances for aircraft and established the firm of E. R. Calthrop's Aerial Patents, striving for the day when the law should demand that every person flying should be equipped with a parachute.

By the death of Everard Richard Calthrop, on March 30, at his home in Maida Hill, W.2, both the railway and the aeronautical worlds have lost a well-known figure. Born in 1857, the earlier and greater portion of his life was devoted to the former service, or, after being educated at Uppingham Grammar School and an early engineering training at Messrs. Stephenson and Company’s works, Newcastle-on-Tyne, he became an apprentice, in 1874, at the Crewe works of the L. and N. W. railway, five years later entering the service of the Great Western Railway at Swindon, where he was soon appointed inspector of stores and materials, and assistant manager at the carriage and wagon works. Very shortly, however, his interests took him further afield, and, in 1882, he was appointed assistant locomotive superintendent to the Great Indian Peninsula Railway. It was during the next few years, while serving in this capacity, that Mr. Calthrop became particularly interested in the subject of light railways as “ feeders ” to main line systems, and by special permission of his Board he became the chairman of an Indian company whose sole object was this development. A few years later he turned his attention to the standardisation of railway plant and rolling stock in India, a subject which has, of course, since been carried to considerable lengths.

Before returning to England, after his retirement from the G.I.P. railway in 1889, he spent some time on survey work for projected light railways, and was largely responsible for the success of the Barsi Light Railway, by means of which he demonstrated the advantages of the narrow gauge railway of heavy traffic capacity.

In 1892 Mr. Calthrop commenced practice in England as consulting engineer, and, as such, carried out much survey work for, and reported on, projected light railways both at home and abroad. It was not until the Great War period that he took up the study of aeronautics, when, in 1916, he became the managing director and chairman of Messrs. E. R. Calthrop’s Aerial Patents, Limited, from which date he devoted the remainder of his life, until his death at the age of 70, to the study of life-saving appliances from aircraft in general. He was the inventor of the “ Guardian Angel ” parachute, which proved so successful on the Italian front, that the King of Italy conferred upon him the order of St. Maurice and St. Lazarus. He became a member of both the Institutions of Mechanical and Civil Engineers in the year 1900.