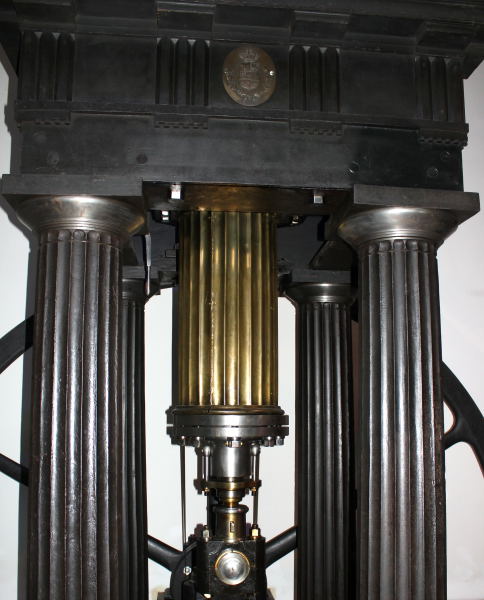 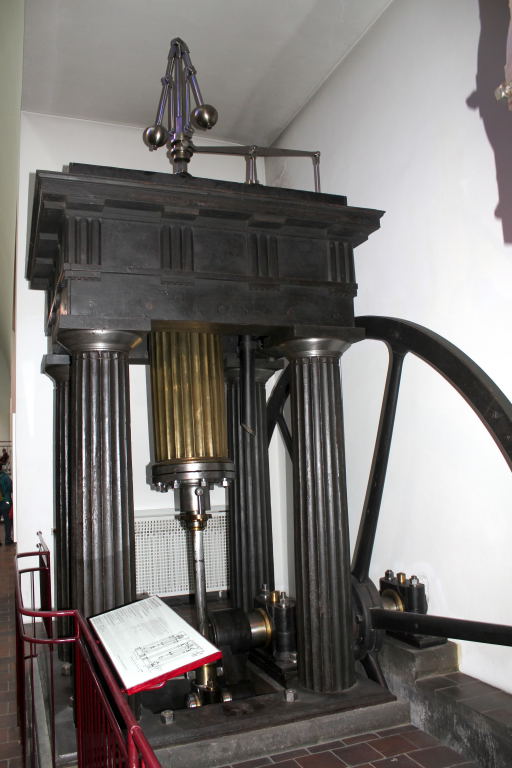 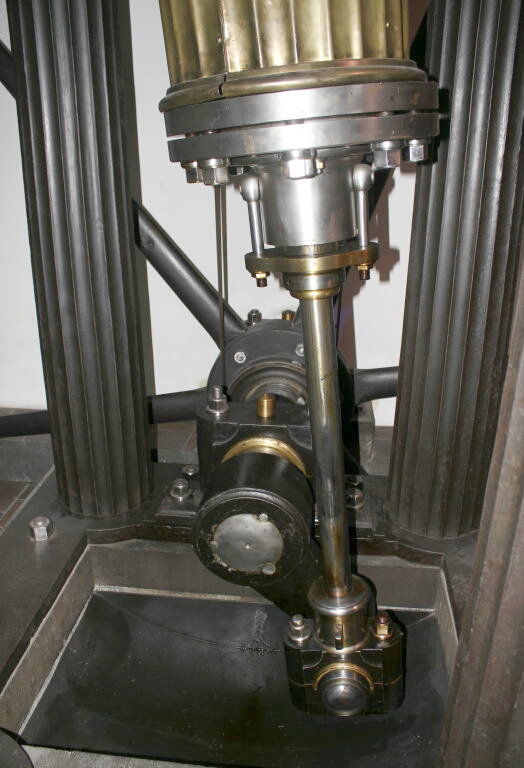 4. The cylinder is attached to a large cast iron frame. The frame has trunnions, but instead of admitting an exhausting steam through the trunnions, which could cause bearing problems due to heat, Alban admitted the steam through pipes inboard of the trunnions, and on the same centre line. The inlet pipe can be see in the photo. See also Fig 8 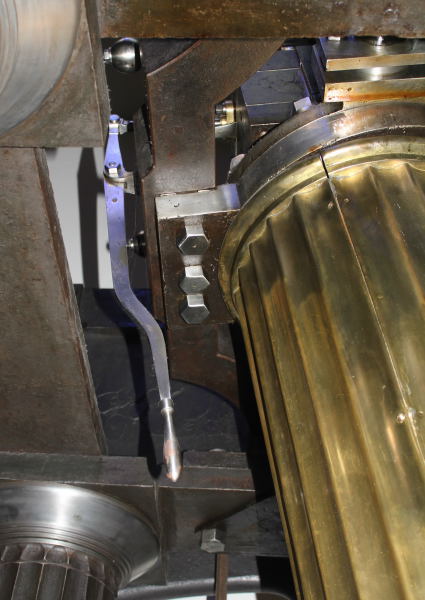 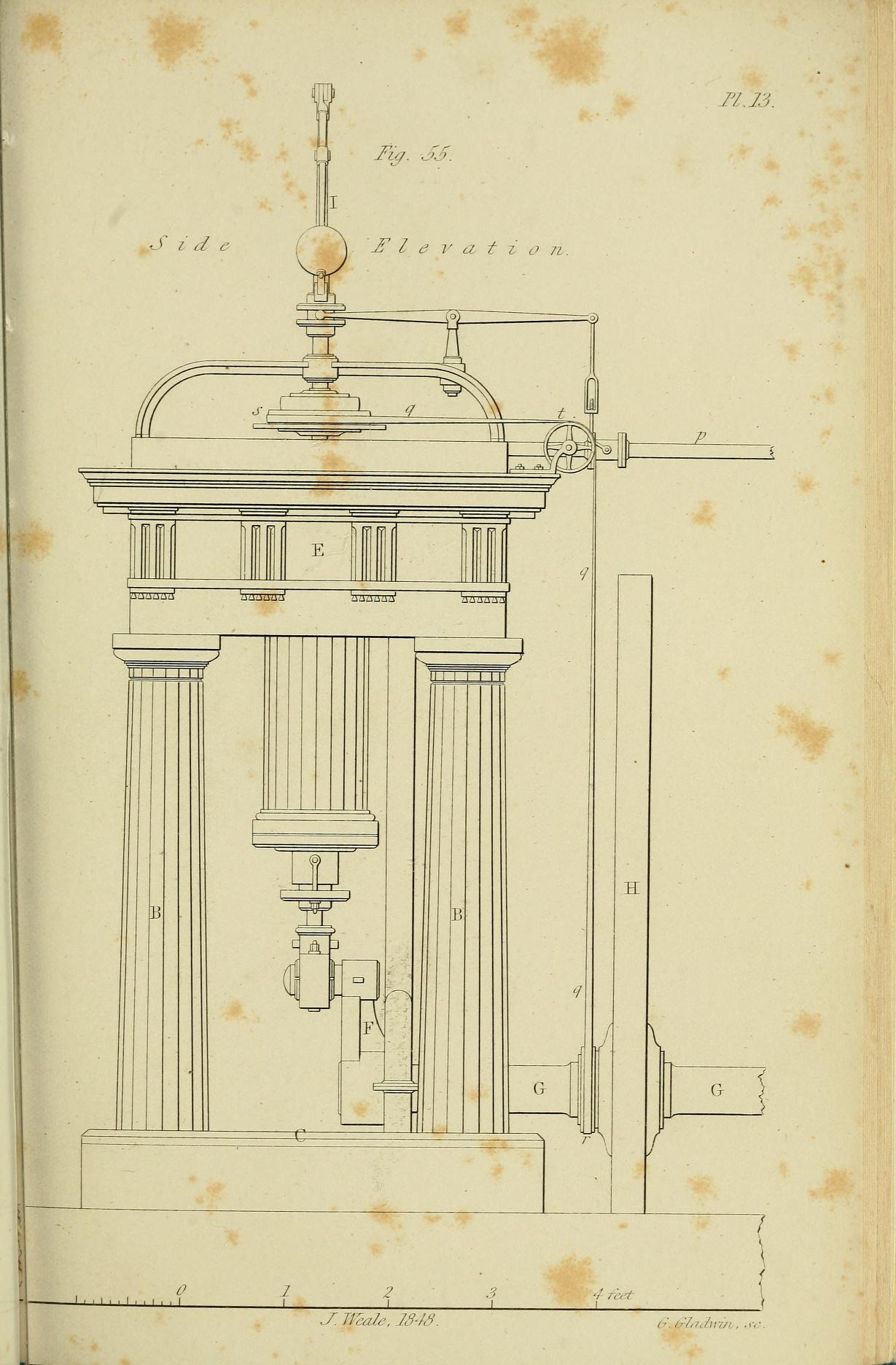 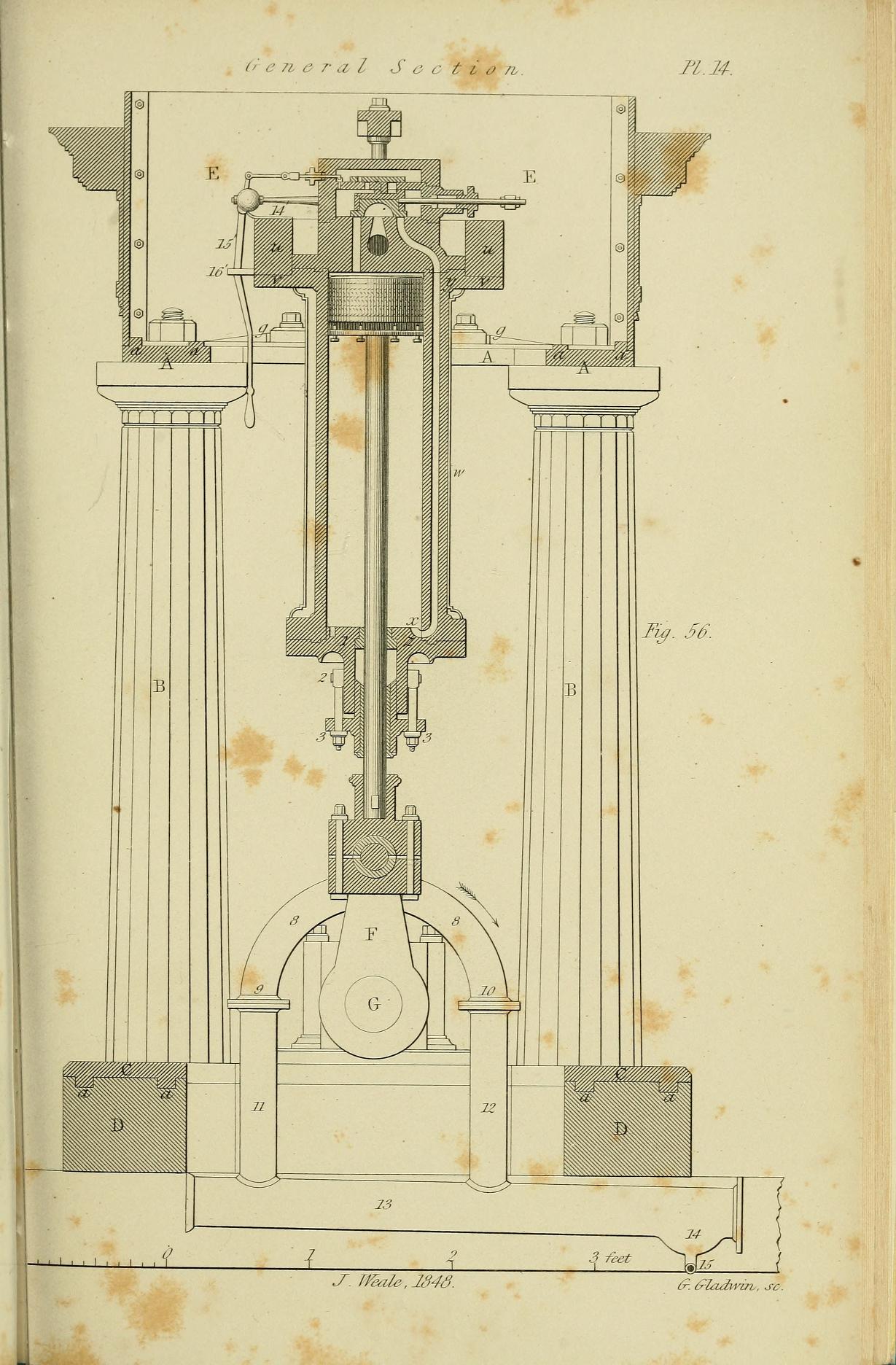 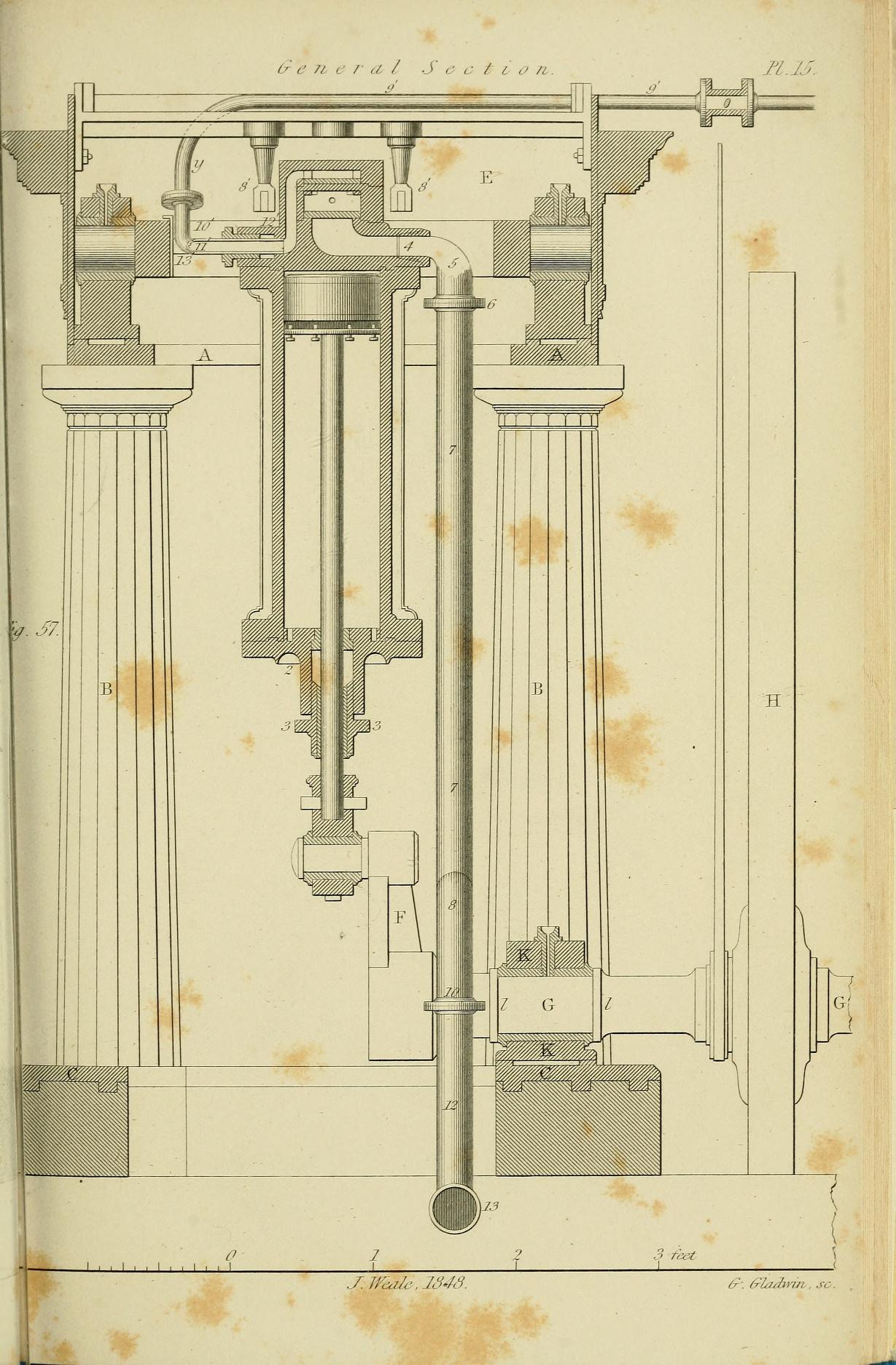 1791 February 7th. Born in Neubrandenburg. He became an eye surgeon, but developed an interest in high pressure steam. In 1825 he travelled to England to learn about practical engineering, and returned home in 1827. In 1829, and started making agricultural machinery in Mecklenburg, and later moved to establish a factory in Plau to make steam engines, boilers, agricultural machinery, and textile machinery. In 1845 he built a paddle steamer, the Plauer, for his own use.[1]

1843 Wrote an important text book, which was translated into English, with notes, by William Pole in 1848[2]. He noted in this book that when in London he believed that he had used steam in his engines at a higher pressure than had ever been used before. He also stated that as an experiment he worked an engine on steam at 1000 psi. In the book, Alban set out in great detail his reasoning behind the adoption of certain design principles and the rejection of others. Clearly there was a great deal of thought, scientific knowledge, and practical experience behind his favoured principles. He was evidently confident that his way was always the right way! Certainly water tube boilers withstood the test of time. His preference for oscillating engines now seems curious, but he had sound reasons for adopting the principle at the time, and he was far from being alone, as large oscillating engines found great favour for ship propulsion.

An 1839 oscillating engine and an 1859 water tube boiler are exhibited at the Deutsches Museum. See photos. Images 6, 7 & 8, showing the 1839 engine, or one similar, are taken from the online copy of Alban's book[3]

Another 1859 water tube boiler is on display at the Vienna Technical Museum.

Dr Alban invented a high pressure steam generator which was patented in England on his behalf in 1825 by J. C. C. Raddatz, and constructed in London. Steam was generated in small wrought iron tubes capable of withstanding a pressure of 4000-6000 psi. These tubes passed through a cast iron vessel containing a readily fusible metal such as a mixture of tin and lead. The vessel was heated by the furnace, but the steam-containing tubes were not exposed to the fire. Water was fed by a reciprocating pump, the quantity being controlled automatically in response to the steam pressure. There was also automatic control of the temperature of the molten metal: two large sensors in the molten metal comprising sealed cylinders filled with air. The air pressure varied with temperature, and a small bore pipe was led to a chamber filled with mercury. The air pressed on the surface of the mercury in the chamber, and forced it up a narrow tube containing a float. The rising float moved a beam, which in turn closed in a damper in the air supply to the furnace. A movable weight was provided on the beam to alter the controlling point. The system was described and illustrated by Elijah Galloway[4]. The principles appear to have been well thought out, but no doubt the equipment was prone to practical problems. Two press reports follow.

1826 'STEAM ENGINES
It is not deviating far from the truth to say, not withstanding the astonishing improvements already made in powers of Steam, that the science and manufacture of these Engines are yet in their infancy. During a recent visit to the metropolis, a much valued and intimate friend invited us to the inspection of an invention, which promises to create a new era in arts and manufactures. It consists of an apparatus for the generating of steam, the invention of Dr. Ernest Alban, Physician of Rostock, in Mecklenburgh, who has been in London for the last few months, procuring the necessary patents, and superintending the erection of an apparatus. It consists of a series of small tubes inserted in a bath of easily fusible metal, and the degree of heat thus obtained, is so great, that water, injected by a forcing pump into the tubes, is instantly converted into steam at a very high pressure ; while by reason of the peculiar construction of the generating vessels, and their being withdrawn from the immediate and destroying influence of the fire, all possibility of danger is avoided. This mode of generating steam is found to be so economical as to the fuel employed, that the apparatus shewn which capable of producing and keeping up a constant supply of steam sufficient for engine of 14 horse power, consumes only five bushels of coals in twelve hours, or at the rate of 35lbs. of coal per hour: the quantity of coal required to produce an equal volume of steam by the ordinary method, being after the rate of 157lbs. per hour. It is needless to enlarge upon the great importance of this saving in all cases; but in how peculiar a degree is it valuable to steam navigation, an art, which is, as it were, just starting into existence, and fraught with consequences so important, both commercial and political ! Had the Enterprize been furnished with Dr. Alban's apparatus for her India voyage, one half of the quantity of coal she carried from the Thames would have sufficed for the whole distance to Calcutta, steaming all the way, instead of being compelled to sail one half of her voyage to the Cape, where she nevertheless arrived with a supply of coal only sufficient for the consumption of two days. By reason of this important saving, smaller vessels may be employed navigated by engines of less power, thus occasioning a still further reduction of expense ; or if vessels of equal magnitude are still employed, the remaining space will offer another source of profit in the way of freight. Another considerable advantage of Dr. Alban's apparatus consists in its little bulk. That which we have seen, including the furnace and flues, with all the necessary brick-work, occupies a space of six feet long, 5½ feet high, and 3 feet deep; and we understand, that a generating apparatus, calculated for an engine of 100 horse power, would stand in the space of 14 feet in length, 10 feet in height, and 3 feet in depth. This apparatus is capable of being applied to all engines, whether worked with high pressure, or with atmospheric pressure steam. Dr. Alban has constructed a new steam engine, which we have also seen, and which possesses very great advantages, but as the invention is not yet specified, we cannot, of course, give any explanation of its construction. Bristol Journal, Feb. 11 '[5]

In 1826, George Porter, presumed to be George Richardson Porter, attempted to supply the Royal Navy Victualling Board with a boiler and engine made to the patents of Dr Alban, to be used in the Brewhouse at Deptford. However, the equipment was unsatisfactory and Porter was required to remove it[6]. It is not clear whether Alban had any involvement or even knowledge of this failed attempt.

1830 'London Mechanics’ Institution
Dr Birkbeck’s Lecture on Steam-Boilers
......But the foundation of what are called tubular boilers was laid by Blakey, an ingenious but unsuccessful mechanic, who placed in his furnace three separate tubes, communicating with each other, instead of a single boiler, thus exposing a much larger surface of water to the action of the fire. Other inventions upon a similar principle were subsequently patented, among which may be mentioned M'Curdy s duplex steam-generators, consisting of a series of tubes connected with each other, and containing other tubes within them, so that the water was spread in a thin sheet between the exterior and interior tubes. Another boiler, of much higher pretensions, was introduced by Dr. Alban, of Mecklenburgh, whose invention consisted in placing a number of tubes, of small diameter, in a strong vessel of cast iron, and surrounding them with metal easily fused when the vessel was exposed the action of the fire. The first of these contrivances, however, was never adopted, and the second, from the numerous practical difficulties which it presented, went little farther than the inventor’s model. ......' [7]