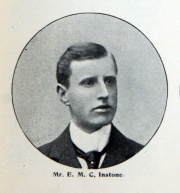 1872 September 10th. Born at Birmingham the son of Thomas Instone the London Manager of George Salter and Co.

1904 INSTONE. E. M. C., Daimler Motor Co., Ltd., 219-229 Shaftesbury Avenue, London, W.C. Entered the service of the Daimler Motor Company, of which he is now manager, in 1896, at which time it had been in existence about one month. On November 14th, 1896, was present at the historic Brighton run. On August 10th, 1897, assisted at the official opening of the Automobile Club. In 1897 gave a private demonstration of cars and cycles before the King, then Prince of Wales, in the grounds of Buckingham Palace. Participated with a Daimler car in 1898 in the first tour organized by the Automobile Club, and in this, as well as practically all the subsequent club events, took part with a Daimler car. Resigned the secretaryship of the Daimler Company in 1899, and went to Paris, where he studied the industry for two years. Was official representative in France of the A.C.G. B. & I. for the 1,000 miles' trial. Holds a Certificat de Capacite as driver for all petrol cars. Has participated in the majority of club events, and won prizes at Welbeck, Castlewellan, &c. Clubs: Aero, Automobile de France, Midland Automobile, A.C.G.B. & I. [1]

1905 The winner of the first event at Shelsley Walsh Speed Hill Climb, Worcestershire, held on Saturday 12 August 1905, was Ernest Instone (35 hp Daimler), who established the hill record by recording a time of 77.6 seconds for an average speed of 26.15 mph

He was connected with Daimler all his life

We regret to record the death of Mr. E. M. C. lnstone, one of the leading personalities in the early history of the Daimler Co. a former member of the Coventry City Council, and a Justice of the Peace for the city and county of Warwick, which occurred at his flat in St. John's Wood, London, on Wednesday evening. Mr. Instone had an illness in February, and though he resumed his work he had not made a full recovery, and was taken ill again last Sunday night, his death on Wednesday being rather sudden.

Mr. Ernest Martyn Critchley Instone was one of the pioneers of the British motor industry, and last year he was honoured by being elected President of the Society of Motor Manufacturers and Traders, a distinction which his excellent record of pioneer work on behalf of the industry thoroughly entitled him to hold.

A Midlands man, Mr. Instone was born at Northfield, Worcestershire, in 1872, and was educated at King Edward's Grammar School, Birmingham, to which he gained admission on a foundation scholarship. He was one of the first Englishmen to take a hand in motor car manufacture, for he joined the Daimler Company in 1896 and resigned in 1899, having been then secretary to the Company for two-and-a-half years.

From 1899 to 1901 he resided in Paris, and in 1901 he returned to England and rejoined the Daimler Company as commercial manager, the late Sir Edward Jenkinson being then Chairman of the concern.

Mr. Instone's completion of 21 years' service with the Daimler Company was marked in 1920 by a dinner at the Piccadilly Hotel, London, when practically all the leading personalities of the motor trade were present. During the evening he was presented with a silver tray bearing the engraved signatures of over a hundred of his oldest and most intimate friends.