The late David Gordon, in 1824, much improved the mode of operating with these substitutes for horses' feet; and Mr. Gurney, in 1825, copied them very closely, as before noticed; both of whose patents will be hereafter described.

Mr. Wood, in his excellent Treatise upon Railroads, informs us that, in 1814, an engine upon Blenkinsop's plan (described at page 395) was constructed at the Killingworth Colliery, by George Stephenson, and tried upon that rail-road. In that engine, it will be observed, that the cog-wheels upon the axis of the propelling-wheels are double the diameter of the smaller toothed-wheels, which derive their action front the reciprocating motion of the connecting-rod; consequently, the latter make two revolutions of each one of the cogged propelling-wheels. The experiments were made upon a piece of edge-rail, ascending about 1 yard in 450; and it was found to drag after it, exclusive of its own weight, eight loaded carriages, weighing altogether about 30 tons, at the rate of four miles an hour.

The application of the two cylinders rendered the action of the engine regular, and secured the continual progressive motion, thus remedying, Mr. Wood observes' the imperfection caused by the irregular action of the single cylinder and fly-wheel. When the engine had been at work a short time, it was soon found that there was sufficient adhesion between the wheels and the rail to propel the carriage; but such was the lingering prejudice, that grooved sheeves were afterwards applied to the hinder travelling wheels of the engine, and similar grooved sheeves upon the fore-wheels of the convoy carriage containing the coals and water; both these were then connected by an endless chain; but this contrivance also was soon found to be unnecessary, and the adhesion of the wheels alone produced the desired effect.

The communication of the pressure of the steam upon the piston, through the means of the connecting-rod and crank to the cog-wheels, produced great noise, and, in some parts of the stroke, considerable jerks; each cylinder alternately propelling, or becoming propelled by the other, as the pressure of the one upon the wheels became greater or less than the pressure of the other; and when the teeth became worn, they produced a rattling noise. For when the leverage of one crank became greater than the other, the latter was propelled by the other through the intervening wheels; but when the former approached towards the extremity of the stroke, its leverage became less and less, and the leverage of the latter became greater, as the angle between the connecting-rod and the crank increased; and, at a certain point, the latter preponderated. When a change in the action took place, the former was then the propelled, and the latter the propelling power. If any play or space existed between each tooth of the cog-wheels, the transition of this power from one side of the teeth to the other always occasioned a jerk; and this became greater as the teeth became more worn, and the space between them greater.

All these inefficient, expensive, and troublesome contrivances, our readers will perceive, were introduced to obviate "the assumed difficulty” which had been demonstrated ten years before to have no existence. To get rid of the cumbrous wheels and pinion, and avoid the jerks and concussions consequent upon the last mentioned arrangement, we find Ralph Dodd and George Stephenson, aforesaid, both of Killingworth, taking out a joint patent "for various improvements in the construction of locomotive engines," which was dated February 28, 1815.

It consisted of the application of a pin upon one of the spokes of the running wheels that supported the engine; the lower end of the connecting-rod being attached to the cross-beam, worked up and down by the piston. (The following engraving serves to explain this invention, although it belongs to the patented improvements subsequently introduced by Mr. Losh, in conjunction with Mr. Stevenson; Mr. Dodd's previous invention being combined therein.) 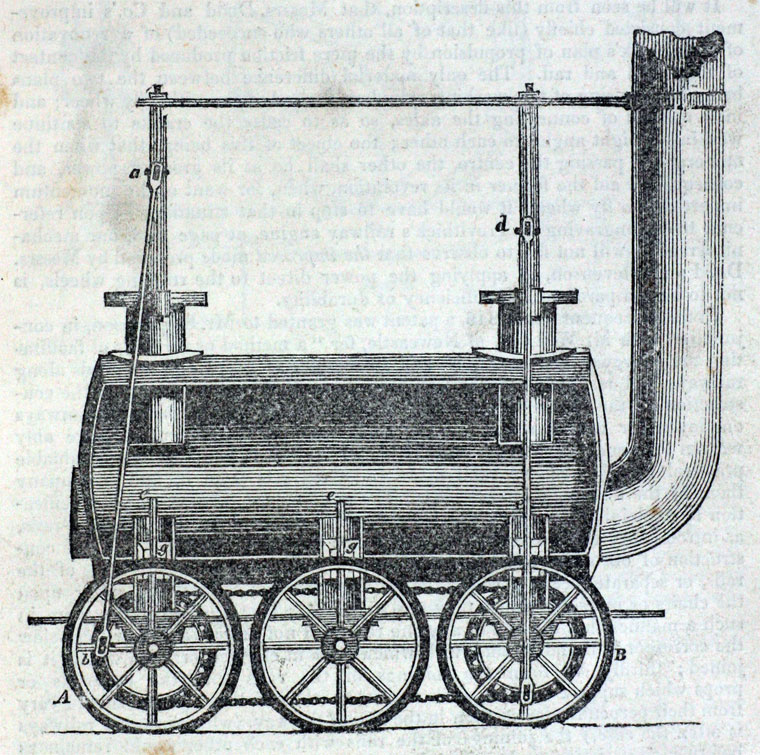 a-b represents the connecting-rod, the end a attached to the cross-beam, and the end b to one of the spokes of the wheel; in like manner the end d of the other connecting-rod is attached to the beam of the other piston, and the lower end to a pin fixed in the spokes of the wheel B. By these means the reciprocating motion of the piston and connecting-rod is converted, by the pin upon the spokes acting as a crank, into a rotatory motion, and the continuation of this motion secured by the one pin or crank being kept at right angles to the other, as shown in the drawing.

To effect this, the patentees had two methods;- to crank the axles, on which each of the wheels were fixed, with a connecting-rod between, to keep them always at the angle with respect to each other; or to use a peculiar sort of endless chain, passing over a toothed wheel on each axle. This endless chain consisted at first of one broad and two narrow links, alternately fastened together at the ends with bolts; the two narrow links were always on the outside of the broad link; consequently, the distance they were separated laterally would be equal to the breadth of the broad link, which was generally about two inches, and their length three inches.

The periphery of the wheels fixed upon the axles of the engine, was furnished with cogs, projecting from the rim of the wheels (otherwise perfectly circular and flat) about an inch, or an inch and a half. When the wheel turned round, these projecting cogs entered between the two narrow links, having a broad link between every two cogs, resting on the rim of the wheel; these cogs, or projections, caused the chain to move round with the wheel, and completely prevented it from slipping round upon the rim. When, therefore, this chain was laid upon the two toothed wheels, one wheel could not be moved round without the other moving round with it and thus secured the proper angles to the two cranks. This mode of communicating the action of the engine from one wheel to another is shown in the drawing, the wheels A and B having each projecting cog-wheels, round which the endless chain passes. When the chain got worn by frequent use, or was stretched, so as to become too long, one of the chains of the axles could be moved back to tighten it again, until a link could be taken out, when the chain was moved back again to its former situation.

It will be seen from this description that Messrs. Dodd and Co.'s improvement consisted chiefly (like that of all others who succeeded) of a renovation of Trevithick's plan of propulsion by the mere friction produced by the contact of the wheel and rail. The only material difference between the two plans being in the using of two working cylinders, instead of one with a fly wheel; and in a method of connecting the axles, so as to cause the cranks to continue working at right angles to each other; the object of this being, that when the one crank is passing the centre, the other shall be at its greatest power, and consequently aid the former in its revolution, when, for want of the momentum imparted to a fly wheel, it would have to stop in that situation. Upon reference to our engraving of Trevithick's railway engine, at page 388, our mechanical readers will not fail to observe that the improved mode proposed by Messrs. Dodd and Stevenson, of applying the power direct to the running wheels, is not to be compared to it in efficiency or durability.