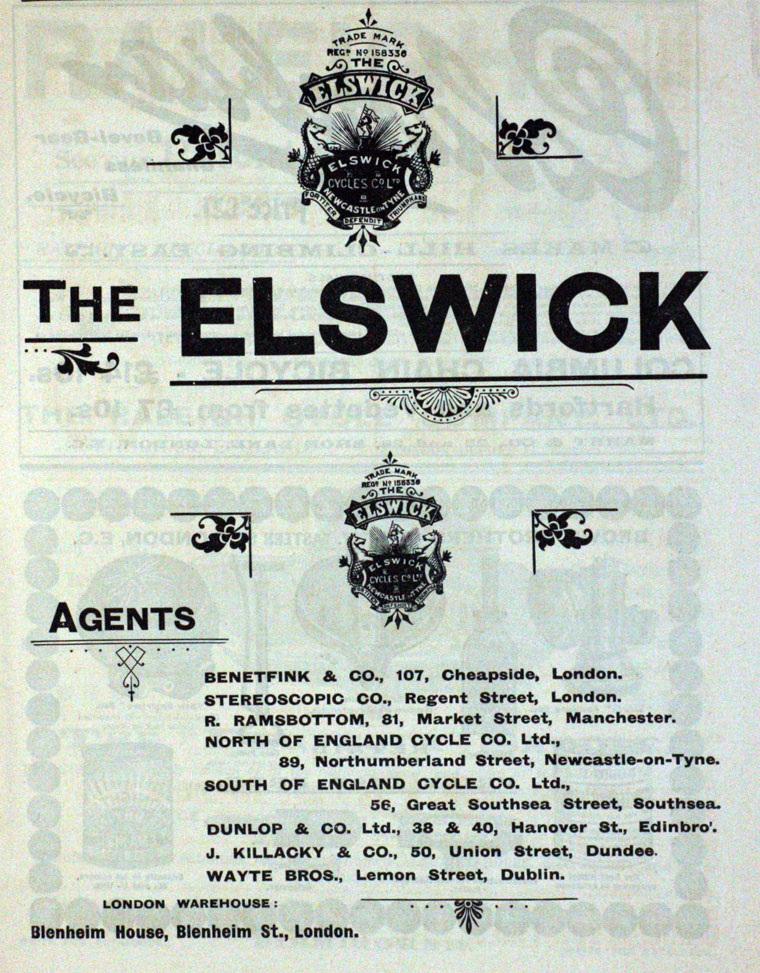 1894 Exhibited cycles at the 1894 Antwerp Exhibition as Elswick Cycle Co of Newcastle.[1]

1896 Resolution to wind the company up. '...That the Company be wound up voluntarily, and that Frederick Samuel Buckingham of the Elswick Cycle Company Limited be and he is hereby appointed Liquidator for the purpose, of such winding up.....Thomas Davidson, Chairman'[2]

1900 Company formed in Scotland. The Elswick Cycles and Manufacturing Coy. - Amongst the new joint stock companies registered in Scotland this week appears. The Elswick Cycles and Manufacturing Company, Ltd., to acquire and take over the business carried on at Newcastle by the Elswick Cycles Company, and carry into effect agreements entered into between James Wilson, Craigenhall, Falkirk, on the one part, and Robert Dobbie, ironfounder, Larbert, on behalf of the said company now being established, and an agreement between Frederick Samuel Buckingham, engineer, Brandling Park House, Newcastle, of the one part, and Robert Dobbie, on behalf of the said company, capital £15,000, in shares of £1. The subscribers are Robert Dobbie, ironfounder, Larbert; James Glenney, manufacturer, Hawick; Charles John Wilson, manufacturer, Hawick; Jas. Wilson, merchant, Craigenhall, Faikirk; D. M. Wilson, solicitor, Falkirk; J. Cameron Walker, ironfounder, Stirling ; G. Dobbie, ironfouuder, Larbert.'[3]

1903 Elswick were motorcycles produced from 1903 to 1915, in Barton-on-Humber, Yorkshire. The company had made purpose built frames to attach engines to and, having previously been involved in the production of bicycles, they went on to list machines with either a 2hp or a 4hp V-twin engine. One or both cylinders of the latter could be used as necessary. The make then disappeared for a few years.

1910 F. Hopper and Co took over the assets of Elswick Cycle Co, a Newcastle business founded in 1880, and maker of well designed and well crafted bicycles much favoured by ‘Society’.

1913 Elswick-Hopper Cycle and Motor Co Ltd formed – flotation was not successful and a receiver was appointed to oversee financial reconstruction.

1912 They returned to the market with two models. Conventional in format, both were fitted with Precision 348cc / 498cc engines of 2.5hp and 3.75hp. Later they produced 4.25hp and V-twins and a model fitted with a 269cc Villiers engine or a 2hp Precision.