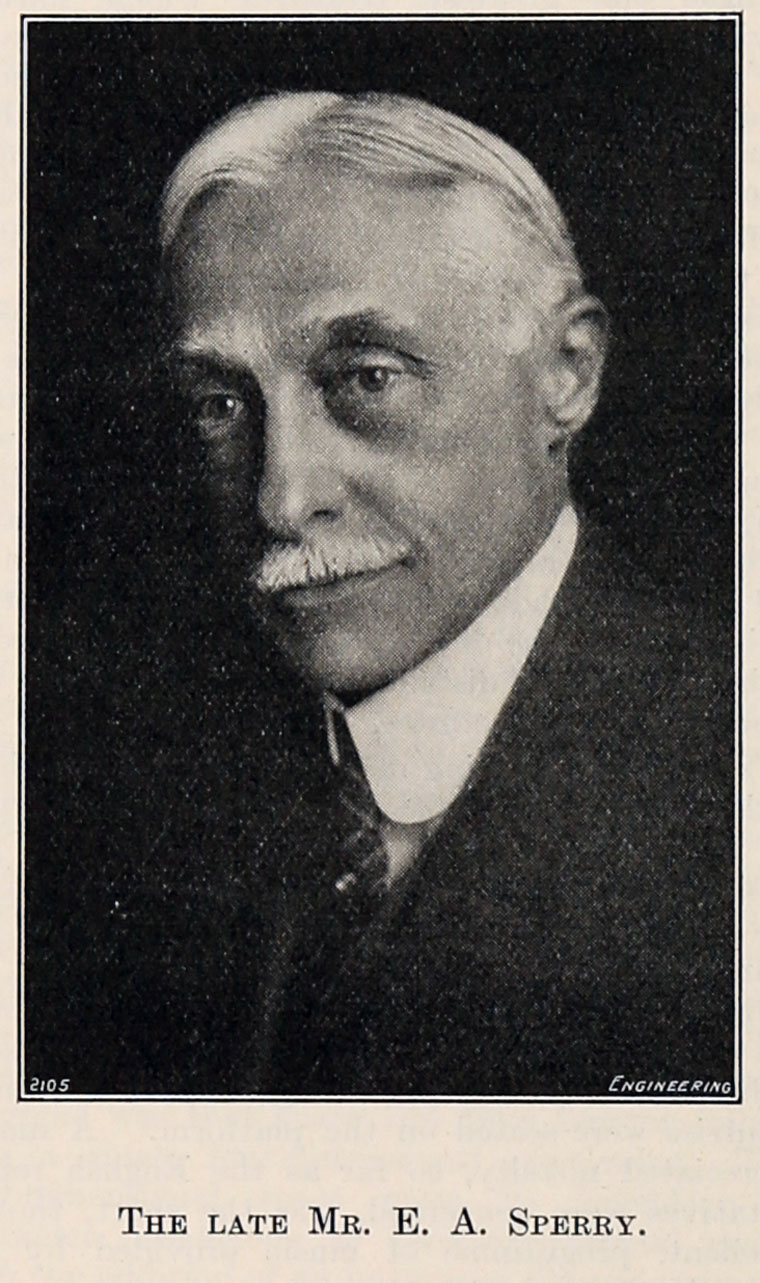 It is with great regret that we have to announce the death, reported from New York, on Monday last, of Mr. Elmer Ambrose Sperry, an engineer who has been responsible for most valuable original work in many industrial fields.

Born at Cortland, New York, on October 12, 1860, Mr. Sperry pursued his earlier education at the local normal school, where he received an excellent grounding in mathematics, and where he was permitted to work in the physical laboratory. During this period, he also spent what time he could in a local engineering shop. In 1879, he proceeded to Cornell, at which, however, he remained for only one academical year. Even before leaving college, Sperry had commenced experimenting on his own account and devised a dynamo and an arc lamp which showed such promise that capital for developing these inventions was secured for an undertaking known as the Sperry Electric Co with workshops at Chicago which were started up on Sperry’s twentieth birthday. Amongst the more notable of his productions at this time was the conversion into a beacon of a 350 ft. tower belonging to the Chicago Board of Trade. This received a corona of arc lamps with an aggregate illumination of 40,000 candle-power, the funds required for this venture being obtained mainly from local subscriptions.

In 1884, and thus when only 24 years old, Sperry took a prominent part in founding the American Institute of Electrical Engineers. He was also largely responsible for the formation of the National Electric Light Association, which originated, somewhat curiously, in troubles due to interference between electric lighting mains and telephone wires, which at that date relied on earth returns. The American Electro-Chemical Society was another important technical corporation of which Sperry was an original “ charter member.”

Though his dynamo was one of the first of his inventions to prove of commercial value, Sperry soon lost interest in its further development, largely because the efficiencies secured by known methods were so high that there was no room for any further striking advance in this regard. He turned his attention, therefore, to applications of electricity, commencing in 1888 with the production of electrically-operated coal cutters. Two years later he became interested in electric traction and founded the Sperry Electric Railway Company with the object of developing his ideas. The distinctive feature of his electric street cars was the ingenuity displayed in distributing the load over the extremely light rails then in use. His success in the traction field was such that, in 1894, his patents were purchased by the General Electric Co, and Sperry then turned his attention to the production of electric automobiles with a battery much lighter and more enduring than any previously employed in this service.

Sperry was also responsible for a number of electro-chemical inventions, amongst which may be mentioned his process, still in use, for the electrolytic production of caustic soda and bleach. Mention may also be made of his de-tinning process for recovering tin from scrap and old cans, and of his electrolytic white-lead process, now worked by the Anaconda Copper Mining Co.

His high-intensity searchlight, now in general use by military and naval forces throughout the world, was brought out in 1918. Its intrinsic brilliancy was fully five-fold that of the best of its predecessors, and was due to the use of carbons with a mineralised core, the vapour from which attained some 6,000 deg. C., or practically that of the solar surface. The intensity of the light reached 900 c.p. per square millimetre, of radiating surface. These arc lamps were used by Michelson in the experiments in which he succeeded in measuring the speed of light with a probable error which is estimated as less than one metre in 300,000. The high actinic value of the light has led to its extensive use in film photography.

Sperry’s gyroscopic studies commenced in 1896, ibut took some years to develop. His gyro-compass was first tried in a merchant ship, and 'was later tested on an American destroyer, with such success that, in 1911, it was installed on the , Delaware, the first of the American dreadnoughts. Following this, it was adopted for eight other battleships. It was then taken up by the British, Japanese, French, Italian and Russian navies, i Another, but later, naval development was Sperry’s target hearing and turret-control system, which rendered it possible to hit objects invisible from the turrets, provided the mark could he seen from the fighting top.

With the assistance of his son, Sperry experimented with the gyroscopic control of aeroplanes, and, as the result of trials made in France during the summer of 1914, his “ automatic pilot ” was awarded the Grand Prix of the French Aero Cluh.

One of the most ingenious of his many applications of the gyroscope, has been his automatic stabilisers for checking the rolling of ships. Large rolls are a cumulative effect, and the Sperry gyroscopic stabiliser quenches the roll in its initial stages, when the kinetic energy associated with the movement is very small.- The device was first fitted on the U.S. destroyer Worden, in 1911, and proved effective, even in extreme weather. Moreover, the stabilised vessel ceased to ship water and the decks became dry. Amongst the largest vessels to which the device has as yet been applied is the Japanese aeroplane carrier Hosho.

Sperry’s versatility is well illustrated by almost the latest of his inventions, his rail flaw detector, which is being developed by the Sperry Rail Service Company of Chicago. The device, which was described in Engineering, vol. cxxvii, page 398 (1929), depends upon the fact that flaws increase the resistance of a rail to the passage of an electric current. A special car fitted with generators yielding a current of 4,000 amperes at a potential of two volts, is hauled over the track to he examined. This current is passed into the rails by brushes, and if the rail he uniform the voltage drop will be uniform over the whole of the distance between the two brushes. Means are provided for observing whether this uniformity is attained, and any departure from this is automatically recorded in the car and also on the rail.

In 1926, Sperry was awarded the John Fritz Medal, which is the highest honour the American Society of Mechanical Engineers can bestow, and he also received in recognition of his work, decorations from the Czar of Russia and from the Emperor of Japan."