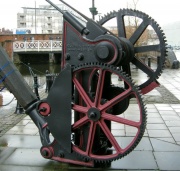 Regarding the Irwell Foundry, a transcribed article states: ' 15th October Saturday 1842: Messrs. Ellis and Norton’s machine shop, opposite the New Bailey Prison, was burnt down October 15. The damage was estimated at £14,000.' [1] 'Norton's' is assumed to be a transcription error.

1838 Accidental death of Joseph Hughes, 32, millwright and engineer, in the service of Ellis & Noton. He was engaged with William Lewis and Samuel Kirkman in repairing a steam engine belonging to Richard Clarke in Worsley. He was leaning through the flywheel to remove a key when steam somehow entered the cylinder and turned the engine, crushing his head against the wall. He left four children and a pregnant wife, who lost her unborn child due to the shock[2]. Another account gave his name as John Hughes[3]

1844 Article describing a Stupendous Piece of Machinery — Ellis's Turn-table: About nine months ago, Mr. Ellis, of the firm of Ellis and Noton, of the Irwell Foundry, Salford, took out a patent for an improved method of constructing railway turn-tables. The great objection to placing turn-tables of the ordinary construction on the main line of a railway is, that by the nature of their construction they are rapidly destroyed by the frequent passage of heavy trains over them, besides the injury done to the carriages, and the unpleasant motion and noise to the passengers. The principle of Mr. Ellis's invention is, that while the turn-table is not in use for turning engines or carriages, it rests firmly on the curbs, and thus allows the trains to pass rapidly over, without injuring either the table itself, the engines, or carriages. This is effected in the following way :—the table is firmly supported in the centre, so that the rails on its surface exactly coincide with the rails on the line when in its ordinary position ; when it is necessary to turn it, a lever, which works backwards and forwards, raises the table and the centres on which it rests, and it is over-turned with ease. It should be added that the table is so constructed, where it is desired, that it may be also used as a weighing machine. Tables of this description have been already furnished by Mr. Ellis to the Liverpool and Manchester, the Manchester and Leeds, the Sheffield and Manchester, the Northern and Eastern, and the Eastern Counties lines; and he is now constructing one of very large dimensions, for the Dublin and Drogheda Railway. We were yesterday favoured with an opportunity of inspecting this gigantic piece of machinery, which is now nearly completed. Its diameter is 32 feet; it will be capable of turning an engine and tender at the sure time; and will be the largest machine of the kind ever made in Europe. When an engine and tender are resting on it, the weight supported will be from forty-five to fifty tons, the weight of the table itself being 28 or 30 tons. It is astonishing, at first sight, how such an enormous mass of metal could be raised and supported on a centre; this is effected by the action of the tension bars, by means of which the table is rendered much stronger than any of the ordinarv construction. The weight is too great to admit of its being worked up and down by a lever; this will be affected by the action of an hydraulic pump.—We understand the machine will be completed on Tuesday, and then forwarded to its destination.'[4]

A photograph of a working model steam locomotive made by Michael Noton, Engineer, of Salford c.1850 is shown in the book 'With the LNER in the Twenties' by Humphrey Household (Alan Sutton 1985). Mr Household had inherited the model, Noton being his great-great-uncle, and he passed it on to the North West Museum of Science and Industry.

A detailed 1848 map shows Irwell Foundry located on Stanley Street between the New Bailey Prison and the River Irwell [7]. The site was by no means large, the map indicating an area of approx 80 ft by 240 ft. There was a small central yard, about 45 ft square. This was presumably where large cranes were assembled, and we know that overhead cranes of more than 45 ft span were made, at least in the time of H. and J. Ellis

There are many cases where good products were often produced in difficult circumstances, in small factories which were far from ideally suited to the work. This was evidently the case here. Reference to the 1848 map shows that the outline of the eastern half of the building was very similar to that shown on an 1831 map, at which time the building was labelled as a 'Deaf and Dumb School' and 'Lying-in Hospital'. More is revealed in a report of the 1842 fire: '...the premises now known as the Irwell Foundry, but formerly used as the School for the Deaf and Dumb..... the whole pile of building, which was formerly two very large double four-storied houses...'. We also learn from the report that 'All the floors of the building (except in the basement story) were filled with machinery and machine making tools, and implements of various kinds. We understand that amongst the former were two marine steam engines, in a forward state; and with respect to which Messrs. Ellis and Noton are under a forfeiture of so much per day if not completed within a time fixed. We believe they were totally destroyed'[8]