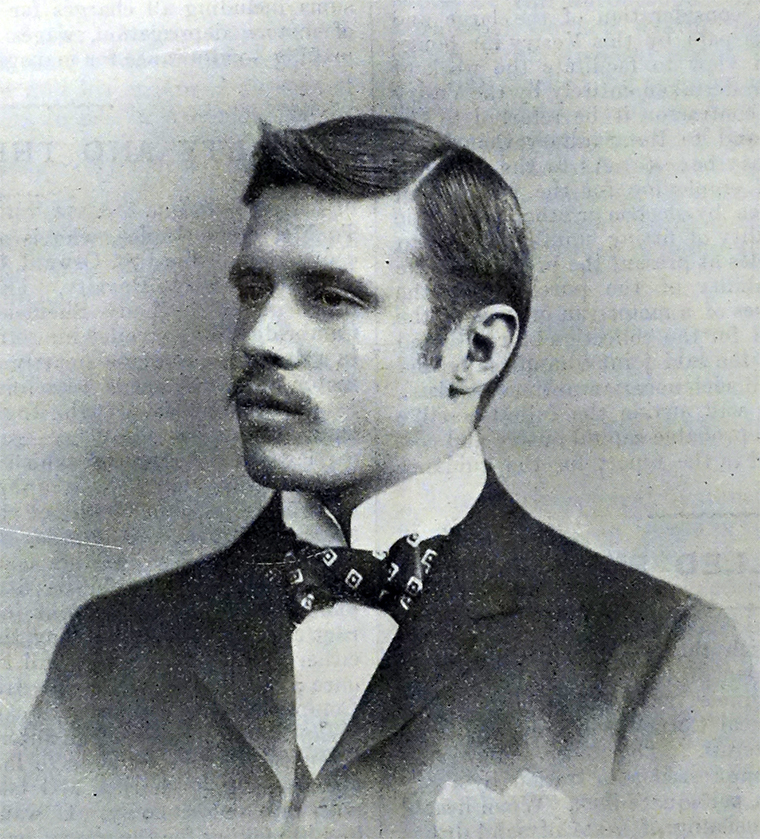 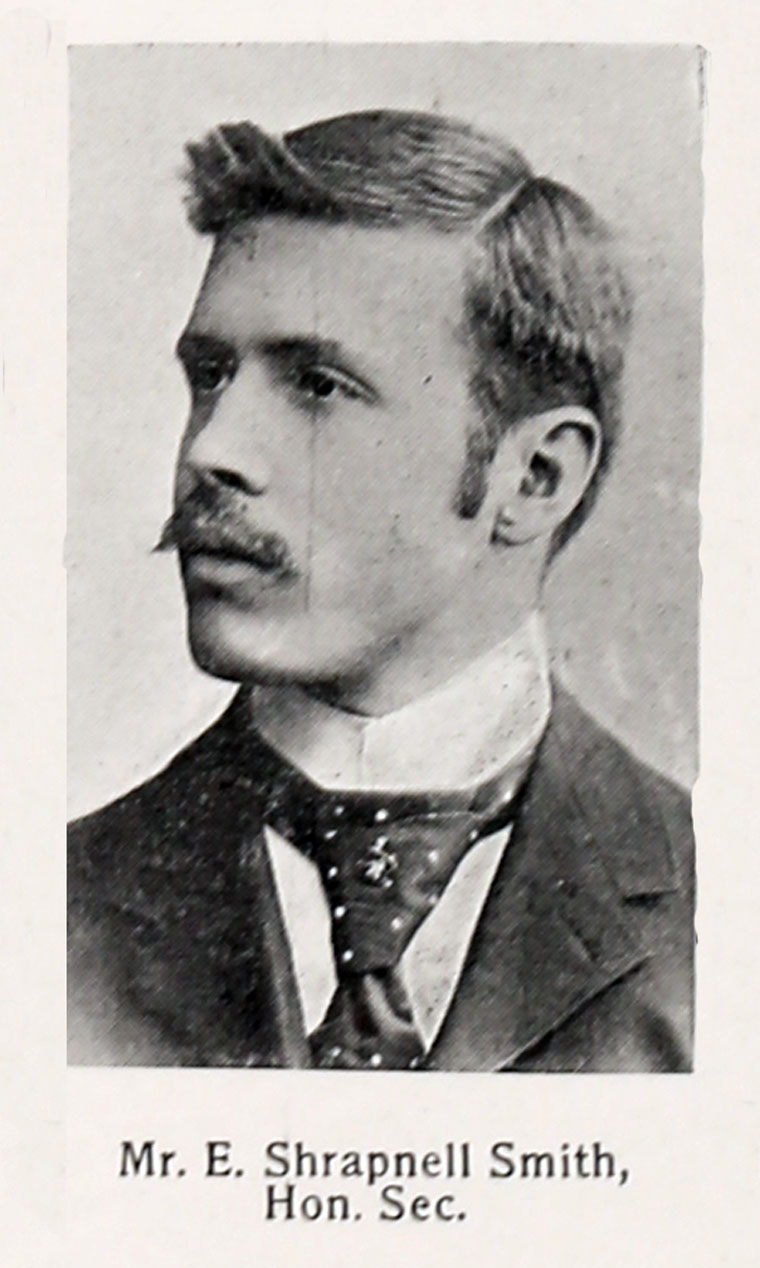 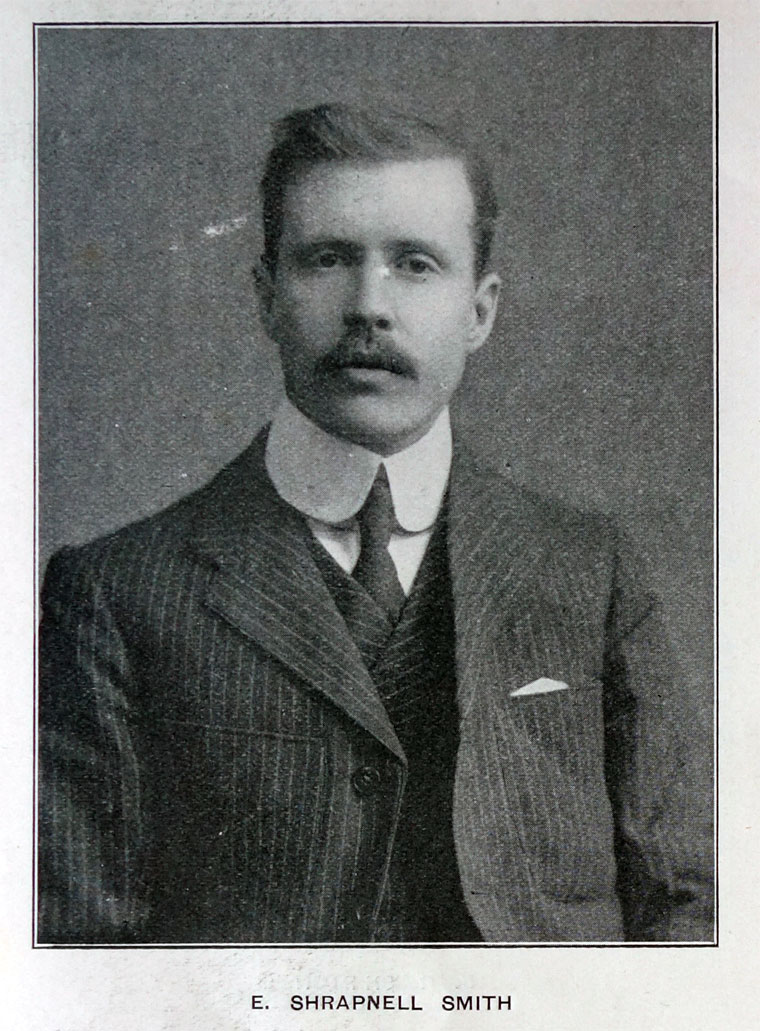 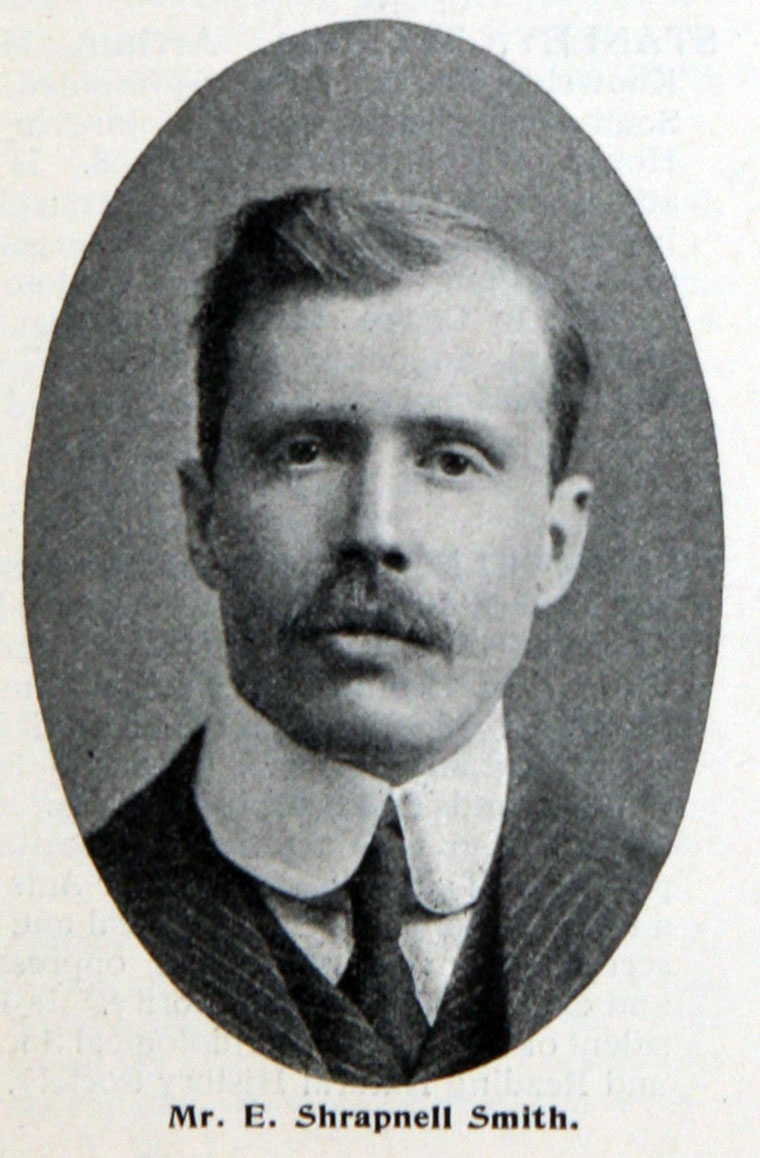 Mr. Shrapnell Smith was educated at the Liverpool College (Modern School), St. John's College, near Preston, the Royal Institution School, mid University College, Liverpool. When 16, as his father wished him to follow either electrical or chemical engineering, with a view to which he had been studying, he was apprenticed to the United Alkali Company (Ltd.), Liverpool, and has gone through their head offices and the Gaskell and Deacon's Works (Widnes) of this great Syndicate. At these works Mr. Smith is now stationed as assistant chemist and process manager.[1]

1904 SMITH, E. Shrapnell, M.S.I., M.S.C.I., Lavender Cottage, Bracknell. Is the pioneer of motoring in Liverpool. Attended Sir David Salomons, Bart's historical meeting at the Cannon Street Hotel, in November, 1895, when the formation of the Self-propelled Traffic Association was decided upon, and he was the sole representative of Liverpool interests. After this meeting he was invited to act as honorary local secretary for Liverpool and district, and proceeded to form a powerful centre, with the Earl of Derby at its head. Is the only son of Mr. Edward C. Smith, a Liverpool merchant; was born at Liverpool in 1875, and educated at the Liverpool College (Modern School), the Liverpool Royal Institution School, and Liverpool University College. Organized and carried out the three series of trials of motor vehicles for heavy traffic, held in 1898, 1899, and 1901. The War Office has commissioned him to undertake some military motoring investigations. Is general manager and secretary to the Road Carrying Company, Limited, of Liverpool. Clubs: L.S.P.T.A., Berkshire Automobile (Treasurer), A.C.G.B. & I. (Club committee). [2]

1910 Of the Berkshire Automobile and Aero Club. Biographical information and image at Automotor Journal 19100827

1930 'ROADWAY TIME TABLES BOOKINGS & PUBLICATIONS Limited, and in the Matter of the Companies Act, 1929. Edward Shrapnell Shrapnell-Smith, of Hound House, Shere, in the county of Surrey.' [3]

SMITH, E. SHRAPNELL.- Born in 1875, and educated at the Liverpool Royal Institution School and Liverpool University College, Mr. Shrapnell E. Smith took up motoring in 1896, in February of which year he was appointed Secretary of the Liverpool Self-propelled Traffic Association. Amongst the principal trials organised by the latter under his supervision, were the Heavy Motor Trials of 1898, 1899, and 1901. He has attended all the principal events of this Club since 1897, and now drives a 10 h.p. Georges Richard car. On his appointment as general manager and secretary of the Road Carrying Company, Mr. Smith has resigned the secretaryship of the L.S.P.T.A., but still takes a keen interest in its affairs as a member of the Council.