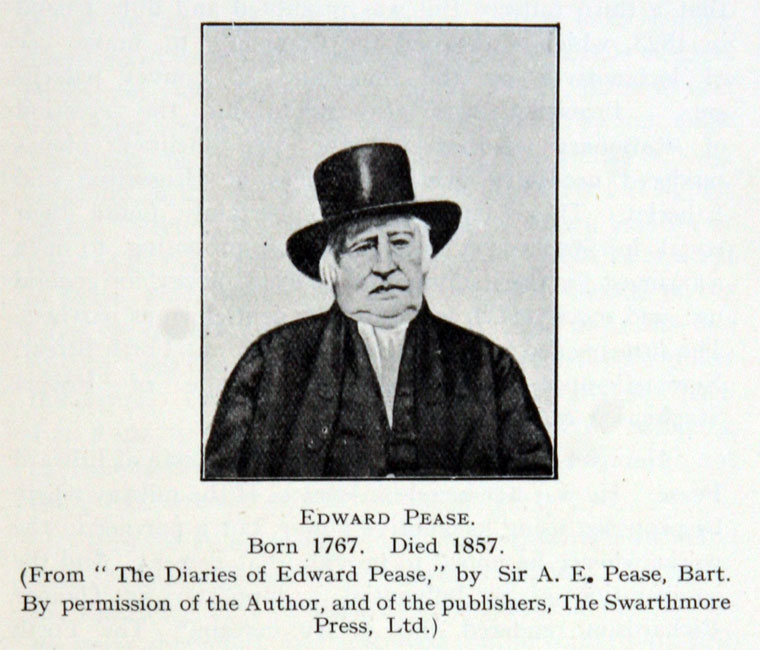 1767 May 31st. Edward Pease was born in Darlington, a member of the locally prominent Pease family, and was educated locally and at a Quaker boarding school in Leeds.

1817 He was active in his family's wool business, but wanted to see a railway line that would link the collieries in County Durham with the port at Stockton-on-Tees and persuaded businessmen to back the plan.

His plan was approved by Parliament in 1821.

Pease had planned a horse-drawn railway until George Stephenson persuaded him to use his steam locomotive instead. The Stockton and Darlington Railway was opened on September 27, 1825 though due to the death of his son, Isaac, the day before Edward Pease did not attend the ceremony.

In 1829 Pease retired from the railway and his second son Joseph took over.

1851 Edward Pease is living at Northgate, Darlington (age 83 and born at Darlington), a Landed Proprietor and a widower. Living with Rachel Fry (age 50) his daughter, a widow. Plus five servants. [1]

1857 A memorial for the first engine was opened but Edward was too infirm to attend. His sons Joseph and Henry were there. [2]

He was known locally as 'Owd Neddy'