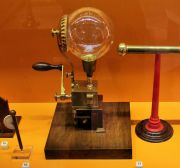 Edward Nairne (1726-1806) was an important maker of scientific instruments.

Born in Sandwich, Kent. Apprenticed to the optician Matthew Loft in 1741. Established his own business at 20 Cornhill in London after Loft's death in 1748.

1774 he took a former apprentice Thomas Blunt into partnership as Nairne and Blunt, a relationship that lasted until 1793 when Blunt opened his own shop at 22 Cornhill.

Nairne patented several electrical machines, including an electrostatic generator consisting of a glass cylinder mounted on glass insulators, intended for medicinal use. He also made improvements to the Cuff microscope, building it into a portable case and calling it a chest microscope.

In the early 1770s, Edward Nairne constructed the first successful marine barometer by constricting the glass tube between the cistern and register plate. The instrument was suspended from gimbals mounted within a freestanding frame to provide additional stability. Nairne’s first marine barometer was sent on James Cook’s second voyage to the South Pacific.

Nairne is credited with creating the first rubber eraser.

1776 Nairne was elected a fellow of the Royal Society. He enjoyed an extensive international reputation, and corresponded with Benjamin Franklin, for whom he made a set of magnets and a telescope around 1758. On Franklin's recommendation, he was asked to supply instruments for the fire-damaged collection at Harvard University.