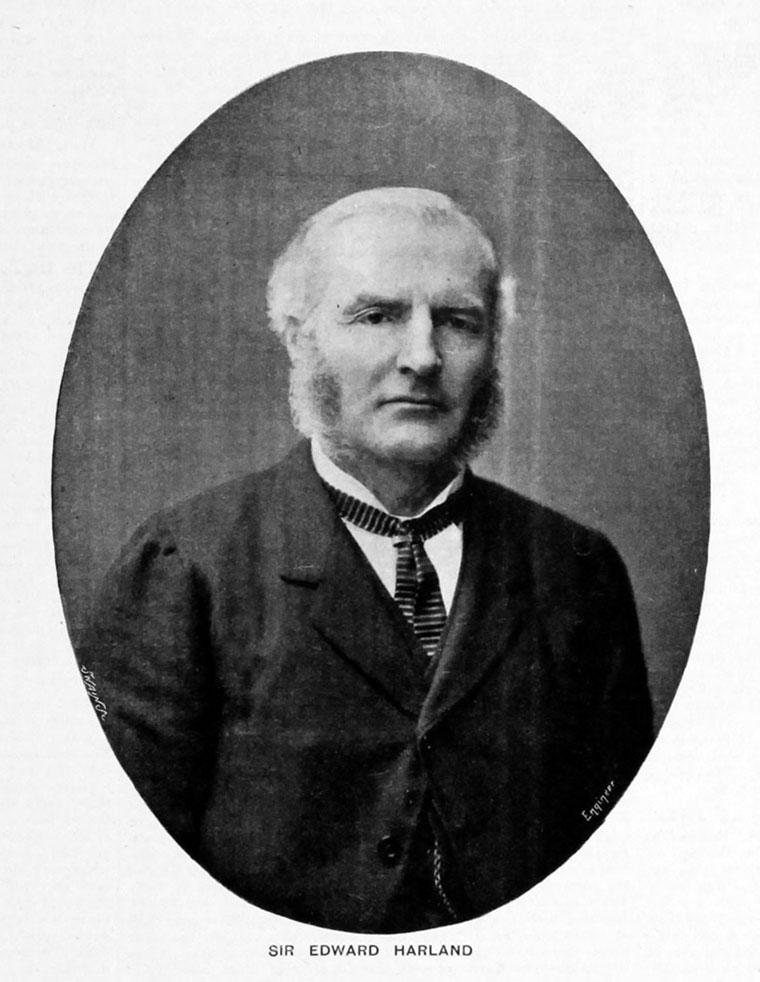 1831 May 15th. Born in Scarborough, North Yorkshire, he was educated at Edinburgh Academy.

Edward James Harland was born on 15 May 1831 in Newborough, a neighbourhood within Scarborough, North Yorkshire to Dr. William Harland and his wife Anne, the daughter of Gowan Pierson who was from Goathland, Yorkshire. Edward was the seventh child of ten, and the fourth boy of six. His antecedent brother died as an infant; Edward Harland is described as the sixth child in the family by alternative sources. Dr. Harland was a physician and an amateur engineer; he invented a patented steam powered carriage in 1827.

Edward Harland was educated at Edinburgh Academy. In 1846, aged 15, he went to Newcastle upon Tyne to serve an apprenticeship at Robert Stephenson and Co, an engineering works. Harland served as an apprentice in Newcastle until 1851. During the apprenticeship, Harland met Gustav Christian Schwabe, who knew Dr. Thomas Harland, Edward's uncle; Schwabe was a partner in John Bibby and Sons, a shipping company based in Liverpool. Schwabe arranged for Harland to be employed at J. and G. Thomson marine engineers in Glasgow, who were shipbuilding for John Bibby, after he completed his apprenticeship. Here, Harland earned 20 shillings a week and became head draughtsman.

In 1853, Harland left Glasgow to return to Newcastle, as the manager of the Thomas Toward shipyard on the Tyne.

1854 December: Moved to Belfast to manage Robert Hickson's shipyard at Queen's Island. Here, Harland became known for strict management and improving workmanship, by cutting wages and banning smoking; he also a carried a piece of chalk and an ivory ruler, used for marking mistakes. A employee at Harland's later venture, Harland and Wolff stated: "He had an all-smelling nose as well as an all-seeing eye. One day he was walking rapidly along, and he suddenly stopped dead and sniffed at a saw-pit. In a flash the trapdoor was lifted and there squatting in the sawdust was a wizened little man, puffing at clay pipe"

Four years later he bought the yard and renamed the business Edward James Harland and Company, before in 1861 he formed a business partnership with Gustav Wilhelm Wolff, his former personal assistant, creating Harland and Wolff.

Edward Harland's new company quickly attracted an order of three boats from John Bibby and Sons. These boats were named Venetian, Sicilian and Syrian; the current company's order book still has the three boats listed as No. 1, No. 2 and No. 3. Impressed with the boats, Bibby ordered six more boats from Harland in 1860. The boats that Edward Harland designed were long, had a narrow beam and were flat-bottomed; the boats became known as "Bibby's coffins".

Outside of his company, Harland served as a Belfast harbour commissioner.

In 1885, Harland was granted a knighthood and a baronetcy. Harland was a member of the Conservative and Unionist Party, and served as Mayor of Belfast; later he moved to London and served as Member of Parliament for Belfast North until his death.

On 26 January 1860, Harland married Rosa Matilda Wann, of Vermont, Belfast, who was the daughter of Thomas Wann, a stockbroker and insurance agent.

In 1861, Harland chose the 27-year-old Gustav Wilhelm Wolff, his former personal assistant, to become a partner in the firm, forming Harland and Wolff. Harland's company had a prosperous relationship with Thomas Henry Ismay's White Star Line, a prominent shipping company, ensuring regular orders and financial success. Harland's designing skills created ships with flatter bottoms and squarer bilges to increase capacity.According to Edward Harland's obituary in The Times, he designed his company's ocean liners "on the model of a fish swimming through the water."

Harland's company received orders during the American Civil War from the Confederate States of America, who bought fast steamers to evade the Union blockade.

In 1874 Edward Harland recruited William James Pirrie, a former apprentice at the company as a partner; Pirrie would later become chairman of the company, and was given the task of finding buyers and negotiating deals.Harland was once asked the nature of the three men's business relationship and replied: "Well, Wolff designs the ships, Pirrie sells them and I smoke the firm's cigars."

In 1880 Harland and his two partners decided to expand further and built their own engine works. Harland began having less involvement in the running of the shipyard, and in 1889 he retired from daily involvement in the business.

Edward Harland served as the chief Belfast Harbour Commissioner from 1875 until the 1880s. Harland was a Presbyterian and a member of the Church in Rosemary Street, Belfast. As a member of the Conservative and Unionist Party, he served as Mayor of Belfast in 1885 and 1886, and strongly opposed the 1886 Home Rule Bill.

In 1889 Harland was elected to serve as the Member of Parliament for Belfast North.Harland then moved to London, and was re-elected unopposed twice in 1892 and 1895 and served as MP for the constituency until his death, on Christmas Eve 1895 at his Irish home, Glenfarne Hall in County Leitrim.

Harland left no heir to his baronetcy.

He was appointed to a Royal Commission on industrial disputes in 1891.

Sir EDWARD JAMES HARLAND, Bart., M.P., was born in May 1831 at Scarborough, where his father occupied a position of importance as a medical practitioner.

In 1846 at the ago of fifteen he was apprenticed to Messrs. Robert Stephenson and Co., Newcastle-on-Tyne; for four years he was in the shops, and in the drawing office during the last year of his apprenticeship, at the termination of which he was taken on as a draughtsman at wages of 20s. a week; and when work began to be scarce he went in 1851 to London for two months, which be spent principally in the machinery annexe of the Great Exhibition.

In the latter part of 1853 he became manager of the ship-yard of Mr. Thomas Toward on the Tyne, where the whole management devolved upon himself.

At the end of 1854 he became manager of Messrs. Robert Hickson and Co.'s ship-yard, Queen's Island, Belfast, where at the outset he was confronted with great labour troubles; but these were successfully surmounted, and fresh orders for ships were obtained. He then purchased the business, and thus commenced his long and prosperous career as a shipbuilder on his own account.

In 1862 he took into partnership his assistant, Mr. G. W. Wolff, forming the firm of Harland and Wolff. Their first contract was for three screw steamers, each 270 feet long, for Messrs. J. Bibby, Sons, and Co., of Liverpool.

On a repetition of the order, he suggested a greater proportionate length, obtaining longitudinal strength by making the upper decks entirely of iron, thereby forming a box girder of immensely increased strength. The new vessels had four pole-masts and no yards, the aim being to reduce the complement of men by using all fore-and-aft sails. These ships made many successful voyages to the Mediterranean and the owners were so satisfied that they sent an order for three more ships, which were to be again 20 feet longer than the last, but no wider.

Yet another feature was introduced into their next ship, the "Persian," built for trade with Venice, which was a port difficult to approach. The new ship was 90 feet longer than any vessel previously entering that port; and in order to give the necessary quickness on the helm the forefoot was cut away, so as to reduce the resistance to turning, and to throw the point on which the ship pivoted nearer to the centre of her length. The overhanging bow with its bowsprit and jib boom was done away with, and the vertical stem without bowsprit was substituted. The iron decks and iron bulwarks with iron rails were found of advantage, for the deck would remain tight without caulking. In order to obviate the difficulty that accompanied any attempt to combine wood and iron in the structure, owing to the different manner in which the two materials are affected by heat and moisture, he filled the spaces between the frames with Portland cement, and covered the plating with cement or cement and tiles.

The Cunard line, which was so soon to find a serious rival in the vessels built at the Queen's Island yard, sent several of their ships to be lengthened, four of which had 63 feet inserted amidships. The long- ship principle was now fairly launched, owners and builders were falling in with the modern notion, and the Belfast yard was full of long ships being built or of short ships being made longer. Messrs. Bibby and Co. ordered three more ships for the Mediterranean trade, and then other vessels followed which brought the number up to twenty, and in none of these was there any sign of weakness.

On the formation of the Oceanic Steam Navigation Co. in 1869 an order for six vessels was placed with the Belfast firm; they were to be capable of carrying heavy cargo and a full complement of cabin and steerage passengers between Liverpool and New York, whilst the speed was to be equal, if not superior, to that of the powerful Cunard ships and their rivals of the Inman line. The first ship built for this line was the "Oceanic," launched in August 1870; she was 400 feet long on the keel, 41 feet wide, and 31 feet deep, gross tonnage 3,807, and horse-power 2,000 indicated, and was fitted with two compound vertical surface-condensing engines with tandem cylinders. The first-class accommodation was placed in the centre part of the vessel; the chief saloon extended from side to side, being lighted by ports through either side of the ship.

In 1874 Mr. W. J. Pirrie, who had served his apprenticeship with the firm and had also for seven years acted as Sir Edward Harland's assistant, became a partner; and in that year and the next were added to the White Star fleet the "Britannic" and "Germanic," in which the length was increased to 455 feet and the width to 45 feet.

Eight more vessels were launched from the Belfast yard for the same line, some of which were large cargo steamers with large space for emigrants.

The crowning work of ships built for this line at Belfast was accomplished in the "Majestic" and "Teutonic," which at the time of their construction were the largest vessels in the world, each being 582 feet long by 573 feet beam and 39A feet deep, with gross tonnage 10,000. They are twin-screw vessels, with triple-compound engines, and horse-power 18,000 indicated.

Since then Messrs. Harland and Wolff have built several cargo and live-stock steamers for the same line, and a largo number for other owners.

Such was Sir Edward's aversion to anything approaching slovenliness in work, that Messrs. Bibby and Co. trusted him entirely; and with the White Star line there was never a specification or a fixed price for a ship. Previously the Queen's Island establishment had not included engine works; but in 1880 a large additional piece of land was acquired, and engine shops were erected, since which time marine engines have been constructed there.

In 1870 he became a commissioner of the Belfast Harbour Board, but shortly after resigned owing to pressure of business; later on he rejoined, and ultimately became chairman of the Trust; in 1887 he retired from the Board. While Mayor of Belfast he entertained the Prince and Princess of Wales on their visit to the city in 1885, and shortly afterwards was created a baronet.

In 1887 he was appointed High Sheriff for County Down, and was a justice of the peace. For some time past he had ceased to take an active part in the management of the firm.

His death took place suddenly at his residence, Glenfarne Hall, near Enniskillen, from heart disease, on 23rd December 1895, in his sixty-fifth year.

He became a Member of this Institution in 1888.