Grace's Guide is the leading source of historical information on industry and manufacturing in Britain. This web publication contains 148,454 pages of information and 233,880 images on early companies, their products and the people who designed and built them. 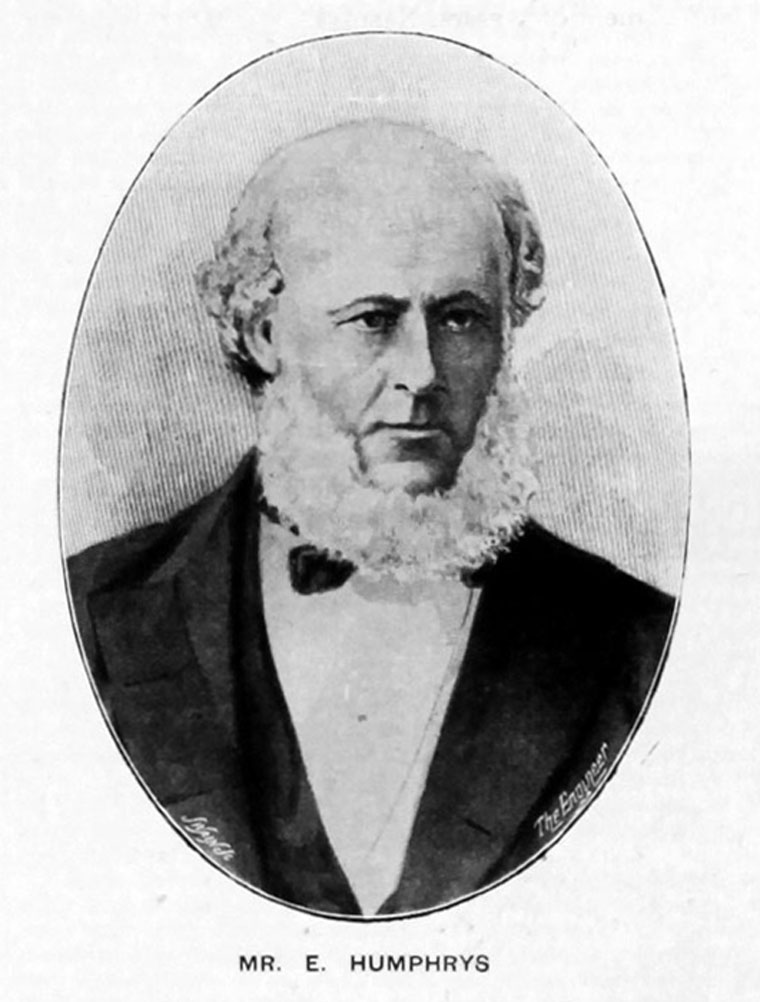 He had worked with John Penn and Sons and G. and J. Rennie and had held the post of Chief Engineer of the Woolwich Dockyard.

1846 Edward Humphreys was one of the 4 signatories of the letter sent to all prominent engineers in Britain proposing the formation of the Institution of Mechanical Engineers, of which he became Original Member No. 25.

MR. EDWARD HUMPHRYS was born near Penzance, in the year 1808, and was removed to Bristol in 1810.

Originally destined for a harness and boot and shoe maker, he served in that capacity for three years ; but, finding the occupation uncongenial, was regularly apprenticed as an engineer to his elder brother Francis, in Liverpool.

From thence he removed with him to South Wales, and for two and a half years was engaged as mechanical Engineer at the Nant-y-glo Iron Works, in the construction of locomotive and other engines ; after which he was engaged by the London and Dublin Steam Navigation Co, superintending the machinery of steam vessels in Dublin, which engagement he closed to come to London.

The first work on which he was engaged in the metropolis was at Hammersmith, where he erected some machinery for drawing lead pipes. Subsequently he entered the service of Mainwaring and Co, of Lambeth, as an ordinary workman, but speedily rose to the rank of foreman. While he was with them he superintended the erection of several steam engines, together with pumping and other machinery.

For a short time he was in the employment of Messrs. Penn, of Greenwich, and of Messrs. Hall, of Dartford, and eventually entered on business in a small way on his own account at Lambeth, where he remained six years. Whilst here he constructed the first marine engines he made. These were placed on board the small river boats Swallow and Don Juan; but they were not considered very successful.

He also produced the beautiful stationary engine, on Wolffs, or the compound principle, for the Polytechnic Institution. But as the business was not profitable, he, in 18xx, became manager for Messrs. Rennie, at their works in Holland Street, Blackfriars. It was while at Messrs. Rennie’s that Mr. Humphrys introduced the circular ring for taking off the pressure from the back of slide valves, and the India-rubber disc valves for air pumps.

In 1850 his services were transferred to the Messrs. Nasmyth, of Patricroft, and shortly after he became Chief Engineer of Woolwich Dockyard.

This post he resigned in 1852, when he entered into partnership with Messrs. Tennant and Dykes, and with them established the marine engine works at Deptford Pier.

Mr. Humphrys, by example and precept, discountenanced at all times apathy and indolence. He drew his own plans, managed his own works, and was always the first man in the factory in the morning, and the last out at night. He put forth his best energies to make a complete success of the compound marine screw engine, and he made considerable headway. By improvements in super-heating, surface-condensing, and expansion, he managed to work down to 2.25lb. of coal per indicated horse power per hour; but as these economical engines broke down, some of them had to be replaced by single engines. Notwithstanding, his career may be described as a steady, onward march towards the highest point of professional prosperity, and which point, at the time of his death, he had well-nigh gained.

EDWARD HUMPHRYS was born at Bristol on 21st April 1810, and early devoted his attention to engineering.

In 1832 he was in the service of the Dublin and London Steam Marine Company, and afterwards was manager for some time to Messrs. Rennie in London until 1848.

In the following year he took the appointment of chief engineer at the Royal Dockyard, Woolwich, and after holding this position for nearly three years went to Mr. Nasmyth at Patricroft; but shortly afterwards he returned to London, and in 1852 established engineering works at Deptford Pier, devoting his attention exclusively to marine engines.

Here he was very successful, many improvements being introduced by him in the details of this class of engineering; and he was largely employed by the British and chief foreign governments.

His latest efforts were devoted to designing engines of 1100 horse power, with 120 inch cylinders and 41 feet stroke, for the iron-clad turret ship "Monarch" building at Chatham.

He was a Member of this Institution from the commencement in 1847, and for several years was on the Council.