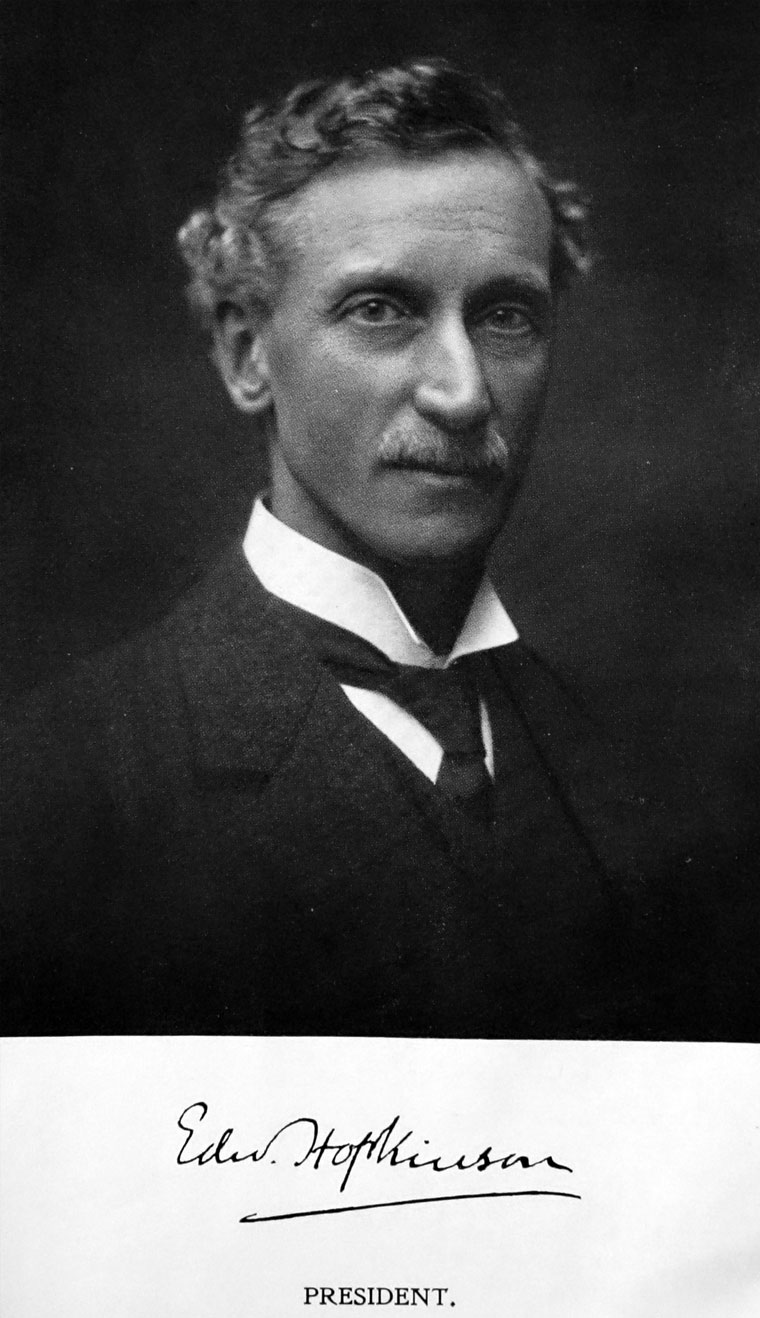 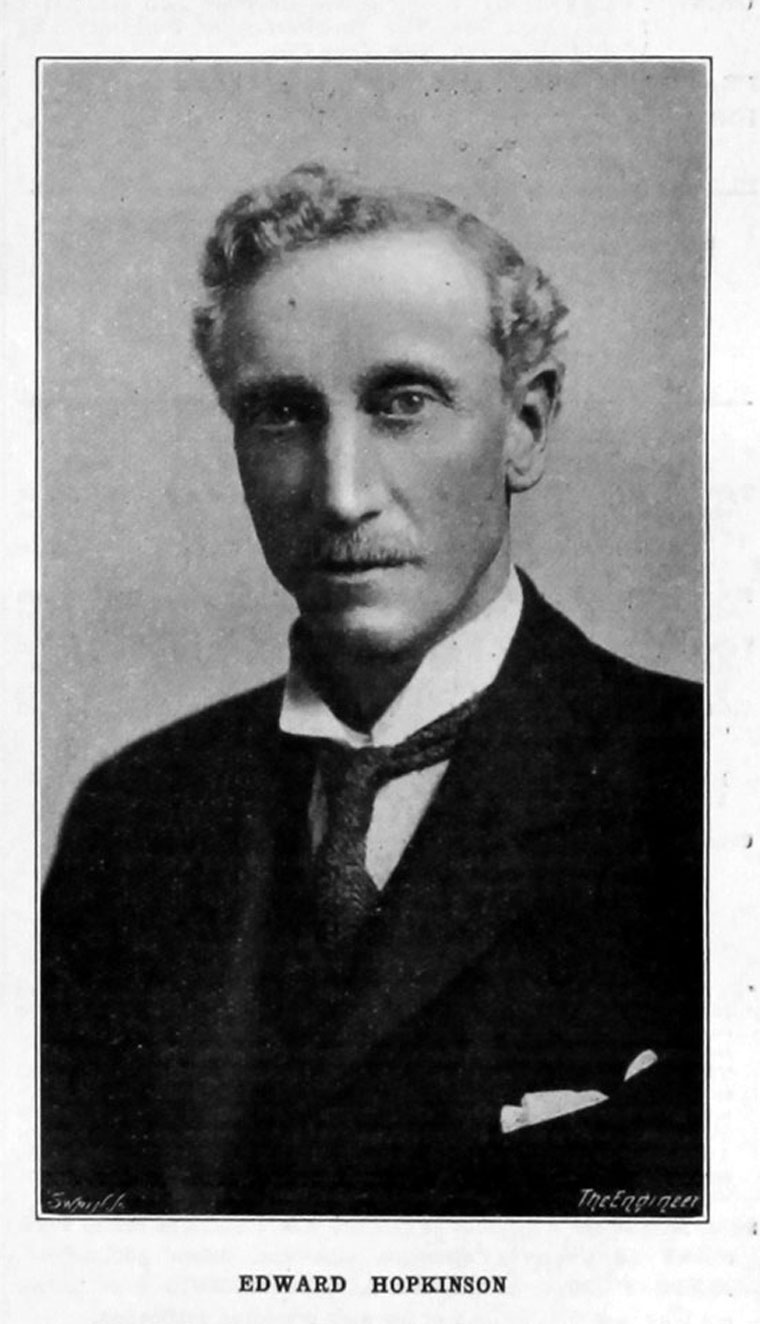 1881 Awarded a first-class honours in the mathematical tripos, scoring the tenth highest mark. In the same year he was awarded the degree of Doctor of Science from the University of London. In 1883 he was elected Fellow of his College.

He was personal scientific assistant to Sir William Siemens, and therefore gained early practical experience of the electrification of railways. His first employment in this area was the electrification of the railway from Bessbrook to Newry, which supplied flax from the wharves to the mills. It was opened for traffic in 1885, and was supplied with electricity from a hydroelectric station. The machinery in the power station was manufactured by Mather and Platt, whose electrical department was run by Hopkinson.

He continued to work for Mather and Platt for the rest of his career. He was made a partner, and when the firm became a limited company, he became managing director. He was appointed vice chairman in 1899.

1913 President of Manchester Association of Engineers.[1]

He was President of the Institution of Mechanical Engineers in 1919.

EDWARD HOPKINSON, D.Sc., M.P., born in May 1859, was a member of a family of engineers, well known in Manchester.

Educated at the Owens College, he later entered Emmanuel College, Cambridge, as a foundation scholar in mathematics, and in 1881 was tenth wrangler in the Mathematical Tripos. In the same year he took the degree of Doctor of Science in the University of London, and in 1883 was elected a Fellow of his College.

As personal scientific assistant to the late Sir William Siemens, he gained early practical acquaintance with the electrification of railways, and his earliest designs in this connexion were for the line from Bessbrook to Newry for the carriage of flax from the wharves to the mills. This line was opened for traffic in 1885 and was supplied with electrical power from a hydro-electric station, the machinery of which was manufactured by Messrs. Mather and Platt, of Manchester, whose electrical department had been placed under the charge of Dr. Hopkinson.

For the Paper describing this work the Institution of Civil Engineers awarded him the Telford Medal and Prize. Previously to this he had contributed, in conjunction with his elder brother, Dr. John Hopkinson, F.R.S., a Paper on "Dynamo-Electric Machinery" to the Royal Society.

For the rest of his life he devoted himself to work with Messrs. Mather and Platt, with whom he became successively a partner and, on the firm being made a limited company, a managing director.

In 1899 he was appointed vice-chairman.

As a pioneer in the application of electricity to traction purposes, mention should be made of the first London tube -T he City and South London — where the innovation of mounting the motor armature direct on to the axles in the motor trucks was made. The electrical equipments of the Douglas to Laxey Tramway and the Snaefell Mountain Railway were also carried out by Messrs. Slather and Platt under his direction.

In 1918 Dr. Hopkinson entered Parliament as Member for the Clayton Division of Manchester and frequently gave a lead in questions of post-war economic difficulty.

He became a Member of this Institution in 1894, a Member of Council 1903, and President in 1919, and his Presidential Address will be remembered as having dealt clearly with the necessity of organization in industry to meet after-war conditions, together with a review of the position of engineering and engineers in India. He was also a Member of the Councils of the Institutions of Civil and Electrical Engineers. He was well known as a mountaineer of considerable distinction.

EDWARD HOPKINSON, D.Sc, M.P., was the fourth son of Alderman John Hopkinson - one-time Mayor of Manchester and himself a distinguished mechanical engineer. He was born on the 28th May, 1859, and died on the 15th January, 1922. He was a member of a brilliantly gifted family - an elder brother was the late Dr. John Hopkinson, a Senior Wrangler and greatly distinguished as an electrical engineer, and another brother is Sir Alfred Hopkinson, the late Vice-Chancellor of Manchester University.

Dr. Edward Hopkinson was educated at Owens College, Manchester, where he was Dalton Mathematical Exhibitioner. In 1877 he gained an Exhibition in mathematics to Emmanuel College, Cambridge, where later he secured a Foundation Scholarship in mathematics. He graduated as Tenth Wrangler in the Mathematical Tripos of 1881, and was elected a Fellow of his College in 1883. In 1881 he took the degree of Doctor of Science in the University of London in the branch of electricity and magnetism treated mathematically.

After leaving Cambridge Dr. Hopkinson became personal scientific assistant to Sir William Siemens, and in this capacity was engaged upon the design and construction of the first electric tramway in the United Kingdom - from Portrush to Bushmills in the North of Ireland. He read a paper on this undertaking, for which he was awarded a silver medal by the Society of Arts. In 1883, after the death of Sir William Siemens, he carried out on his own responsibility the design and construction of the Bessbrook and Newry Electric Tramway. This line was opened for traffic in 1885 and was supplied with power from a hydro-electric station; the electrical machinery was manufactured by Messrs. Mather and Platt of Manchester. Dr. Hopkinson read a paper on the construction and operation of this pioneer electric tramway before the Institution of Civil Engineers and was awarded a Telford Gold Medal and a Telford Premium. In 1884 he joined the firm of Mather and Platt and took charge of their electrical engineering department, where his great electrical knowledge found ample scope. He was made a partner in 1887, a managing director in 1892, and, when the company was enlarged in 1899 by the merging into it of the business of Messrs. Dowson, Taylor and Co., he was appointed Vice-chairman. He remained a member of the Board until his death.

As a pioneer in the application of electricity to traction he worked out and was responsible for the whole of the designs for the first London tube, the City and South London Railway, which was also the first electrical tube line in the world. Here the innovation was made of building the motor armatures directly on the axles of separate locomotives without the intervention of gearing. This railway was opened in 1890 by the Prince of Wales, afterwards King Edward VII. In 1893 Dr. Hopkinson read a paper describing the design and equipment of this railway before the Institution of Civil Engineers, for which he was awarded a George Stephenson Medal and a Telford Premium. The Douglas to Laxey Tramway and the Snaefell Mountain Railway, both in the Isle of Man, were constructed somewhat later. Their electrical equipment was designed by Dr. Hopkinson and the work was carried out by Messrs. Mather and Platt under his direction, and there followed in a similar way the electric tramway from Blackpool to Fleetwood.

In 1891 Dr. Hopkinson was one of the founders of the Chloride Electrical Storage Co., Ltd., of which in 1892 he became joint managing director, and in 1896 vice-chairman, and he remained a director until his death. He was associated with his eldest brother, the late Dr. John Hopkinson, in the design and development of the "Edison-Hopkinson " dynamo and the "Manchester" dynamo, and he was joint author with his brother of a brochure on "Dynamo-Electric Machinery" read before the Royal Society in 1886.

Dr. Hopkinson's scientific knowledge and wide experience were applied to good purpose in many public capacities outside engineering subjects. He was appointed by the Government in 1916, and for two years remained, a member of the Indian Industrial Commission, in connection with which he made an extended journey to India, which, unfortunately, taxed heavily a constitution that was already showing some signs of over-strain from a life of constant and most strenuous activity. He was also a member of the Industrial Fatigue Research Board of the Department of Scientific and Industrial Research. He was a member of the Court of Governors of Manchester University and Chairman of the Associates of Owens College, and took the keenest interest in everything concerned with his old University. His sympathies in regard to social and welfare work were very broad. He worked tirelessly for and supported generously the Salford Royal Hospital, of which he was Treasurer and Chairman of the Extension Committee. He also took a very great interest from its inception in the David Lewis Epileptic Colony, of which he was Chairman, and in the Manchester Mill Girls' Institute.

It was only comparatively recently that Dr. Hopkinson, who had little love for the glamour of public life, yielded to the persuasion of his friends and stood as candidate for the Clayton Division in Manchester in the Parliamentary Election of November 1918, when he was elected by a large majority. Unfortunately, the strain of the election following the effects of the journey in India still further taxed his strength, and from that time his health began to fail and he was not able to take a very active part in parliamentary life.

In early life Dr. Hopkinson was a keen Alpine climber, and he was equally at home on English rocks. He married Minnie, daughter of the late John Campbell, of Rathfern, Co. Antrim ; they had two children, a son and daughter, who, with Mrs. Hopkinson, survive him. His death is a great loss to the country as well as to those who were his personal friends. He was a man in whom devotion to duty was an inspiring principle, and he infused energy and enthusiasm into every task that he took in hand. Even when his physical health began to fail, his mental activity never flagged, and his zeal in advocating the causes, social and political, which he had at heart, seemed, if possible, to grow in intensity, and now that he has gone his bright eager personality will be greatly missed by a wide circle of sorrowing friends.