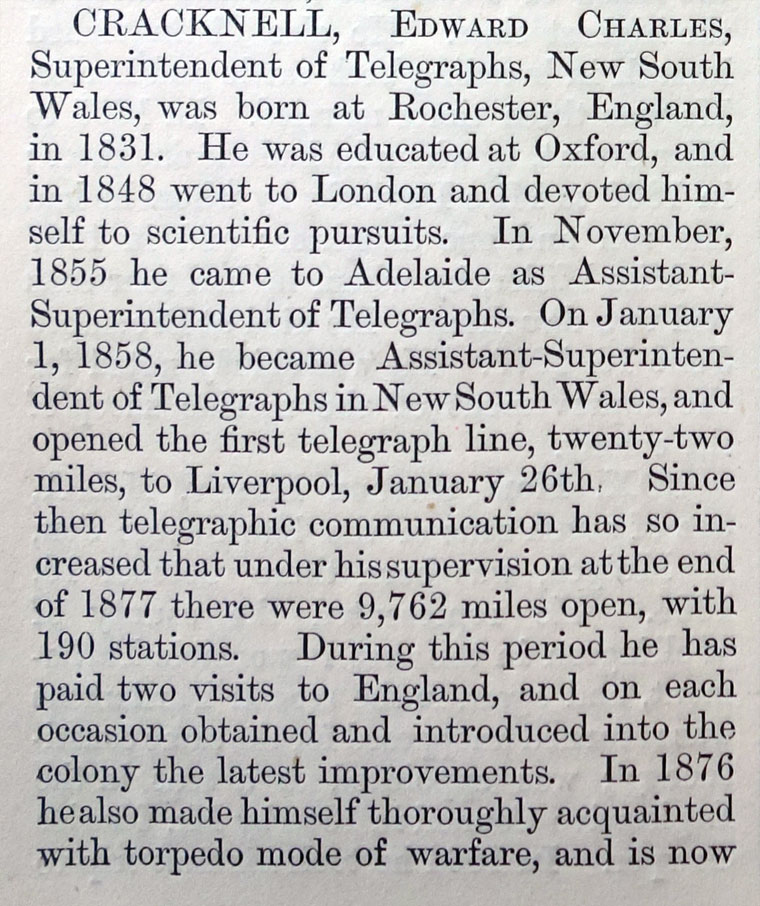 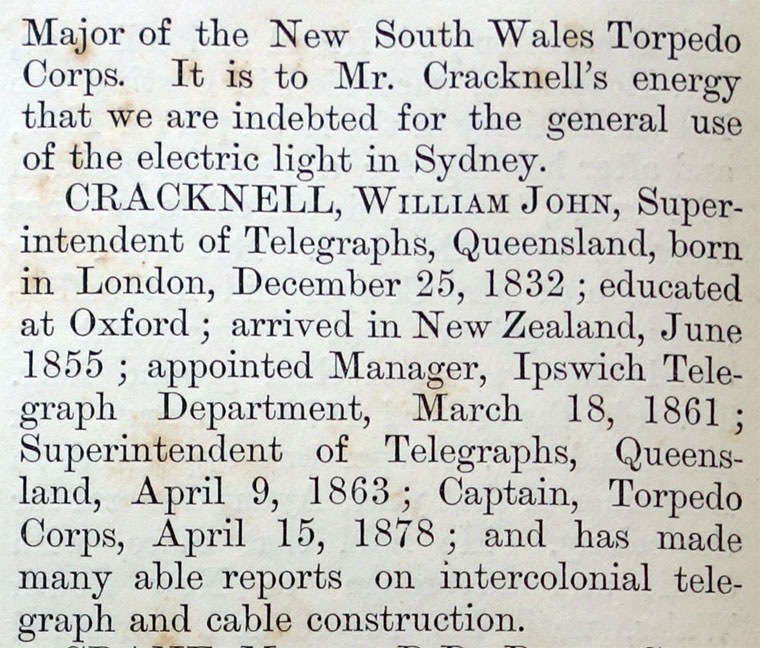 CRACKNELL, EDWARD CHARLES, Superintendent of Telegraphs, New South Wales, was born at Rochester, England, in 1831. He was educated at Oxford, and in 1848 went to London and devoted himself to scientific pursuits.

In November, 1855 he came to Adelaide as Assistant-Superintendent of Telegraphs. On January 1, 1858, he became Assistant-Superintendent of Telegraphs in New South Wales, and opened the first telegraph line, twenty-two miles, to Liverpool, January 26th: Since then telegraphic communication has so increased that under his supervision at the end of 1877 there were 9,762 miles open, with 190 stations. During this period he has paid two visits to England, and on each occasion obtained and introduced into the colony the latest improvements.

In 1876 he also made himself thoroughly acquainted with torpedo mode of warfare, and is now Major of the New South Wales Torpedo Corps.

It is to Mr. Cracknell's energy that we are indebted for the general use of the electric light in Sydney.

EDWARD CHARLES CRACKNELL was born at Rochester on the 22nd of May, 1831.

At an early age he went to London, where he served an apprenticeship of some years to a chemical and philosophical instrument maker and then spent a few months in the works of a telegraph engineer.

In 1855 he proceeded to Adelaide to take up the duties of Assistant Superintendent of Telegraphs for the South Australian Government and in 1857 he was appointed to a similar post in New South Wales.

Early in the following year he opened a telegraph line between Sydney and the town of Liverpool, a distance of 22 miles. This was the third line in the colony; the first connecting Sydney with Parramatta and the second Sydney with South Head.

On the retirement of Captain (now Colonel) B. H. Martindale in 1861, Mr. Cracknell was appointed Superintendent of Telegraphs, a post which he held until his death.

Some idea of the work he carried out may be obtained when it is stated that there are now in the colony of New South Wales about 600 telegraph- and telephone-stations and over 22,000 miles of line open, and that the equipment of the various stations and offices is of the most complete and modern kind.

Mr. Cracknell took great interest in the scientific side of military work and in 1874 received a commission as Lieutenant in the Torpedo Corps attached to the Naval Brigade of the colony. Three years later, when this corps was transferred to the Military Department under the style of the Submarine Miners Corps, he was promoted to the rank of Major and in 1886 was gazetted Lieutenant-Colonel Commanding. It was from over exertion in connection with an all-day parade of this corps that he contracted the attack of angina pectoris which ended fatally on the 7th of January, 1893.

Mr. Cracknell was a most capable and efficient chief of the Telegraph Department of New South Wales. In 1885 he represented that colony at the Berlin Postal Conference, from which he brought back and subsequently made use of much valuable information. The duplex and quadruplex systems, now generally used throughout Australia, were introduced by him.