1846. Engine for the Furness Railway. 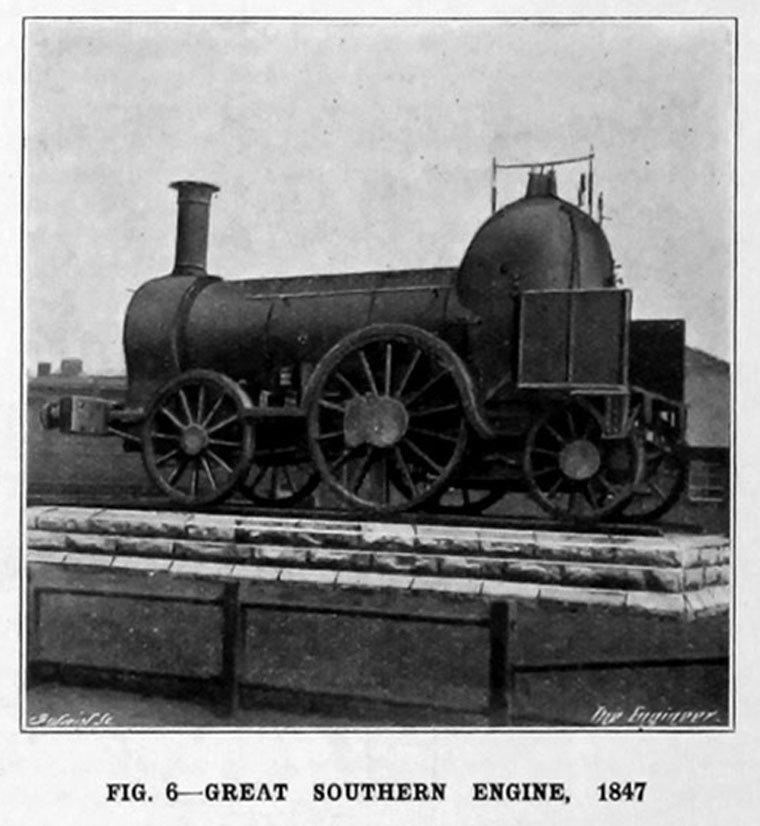 Edward Bury and Company were a locomotive producer in Liverpool.

c.1823 Edward Bury set up his works some time around 1823, under the name of Edward Bury and Company. He employed James Kennedy, who had gained experience of locomotive production under Robert Stephenson, to be his works foreman, later becoming a partner.

1830 The first locomotive he built was called Dreadnought; it ran on the Liverpool and Manchester Railway but proved too heavy for the track and was very unsteady.

1831-37 Around twenty locomotives were supplied to railroads in America.

1832 No. 6, Roanoke, was built for the Richmond, Fredericksburg and Potomac Railroad in America.

They refined their designs and the resulting 2-2-0 locomotives quickly became a standard which was emulated by many other manufacturers, becoming known as the "Bury type". It no doubt helped that Bury was also the Locomotive Superintendent of the London and Birmingham Railway, to which they sold over a hundred machines. Thirteen were supplied to the Great Northern Railway (six of them being sub-contracted to William Fairbairn and Sons), and they became the standard classes on the Eastern Counties Railway, the Midland Counties Railway, the Manchester, Bolton and Bury Canal Navigation and Railway, the Lancaster and Preston Junction Railway and the North Union Railway. They were notable for their round topped "haystack"" fireboxes, the innovative forged-iron bar frames, and a high boiler pressure for the time of 120 psi. The main problem with them were those experienced by other engines of the time with the crank axles associated with the inside cylinders.

1833 No. 7 Meherrin, and No. 8 Appomattox built for the Raleigh and Gaston Railroad, America.

1834 No. 11 Staunton, and No. 12 Petersburg built for the Raleigh and Gaston Railroad, America.

1837 No. 44 John Randolph, No. 45 Sheppard, and No. 46 Stafford built for Richmond, Fredericksburg and Potomac Railroad in America.

1837 No. 47 Patrick Henry (A Class) built for Richmond, Fredericksburg and Potomac Railroad in America.

The magazine 'The Artizan' provided a description and fine illustrations of a type of locomotive built for the London and Birmingham Railway[2]. A distinctive feature of Bury's locomotives was the use of forged bar inner frames, well illustrated here.

1842, Bury took his foreman, James Kennedy as a partner, and the company changed its name to Bury, Curtis and Kennedy.

1846 The Huddersfield was built by Bury in 1846 for working mineral trains on the Stockton and Darlington Railway.[3]

By 1846, much larger engines were being requested by the railway companies and, though sales continued, the company had fallen behind in its designs and was wound up in 1851 having built around 415 locomotives. They had also produced engines for steamships.

From Short Histories of Famous Firms by Ernest Leopold Ahrons, from The Engineer 1923/02/02.

"When Edward Bury founded his famous firm in Liverpool does not appear to be known exactly, but that it was in existence as a general engineering shop for some years before the building of the first locomotive was begun in 1829 is certain. The construction o£ the Liverpool and Manchester Railway appears to have given him the idea that the manufacture of locomotives could with advantage be added to the work on which his factory was employed, and subsequently their construction gradually superseded the general and machine work. The earliest locomotive built by Mr Bury was a six wheels coupled engine named Dreadnought, the construction of which was begun in 1829. No authentic illustrations or dimensions of this engine are known to exist, but from the description it would appear to have been modelled to some extent upon the practice of Stephenson and Hackworth, in that a return-flue boiler was used, but the outside inclined cylinders were connected to an independent driving shaft, to the cranks of which the coupling rods were also attached..."