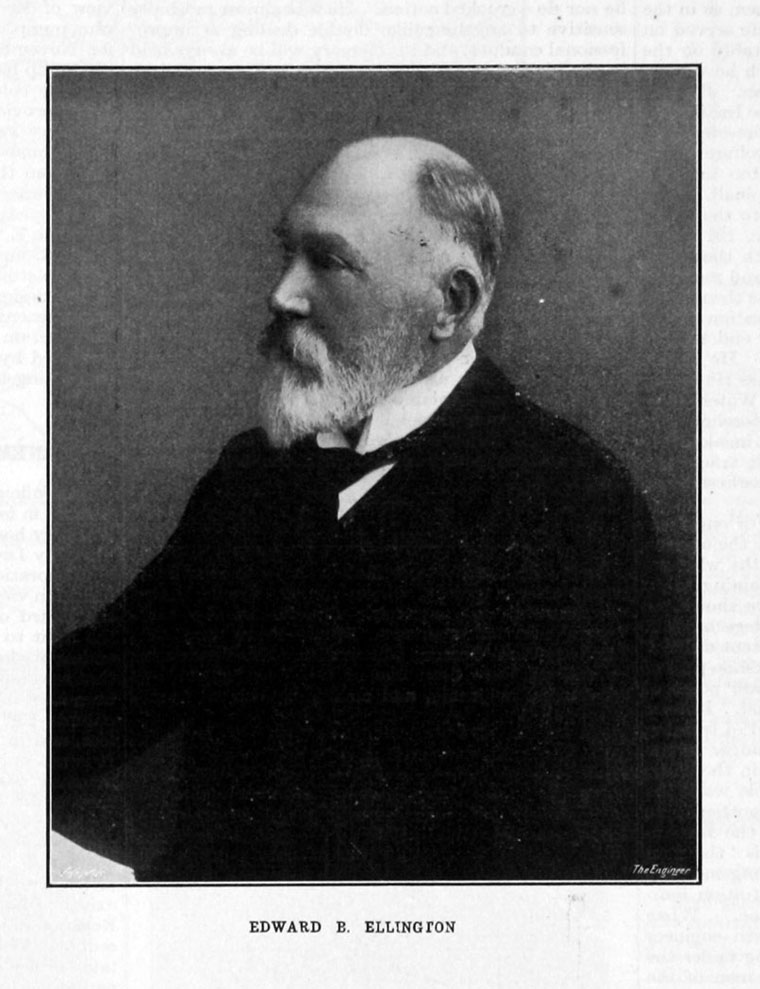 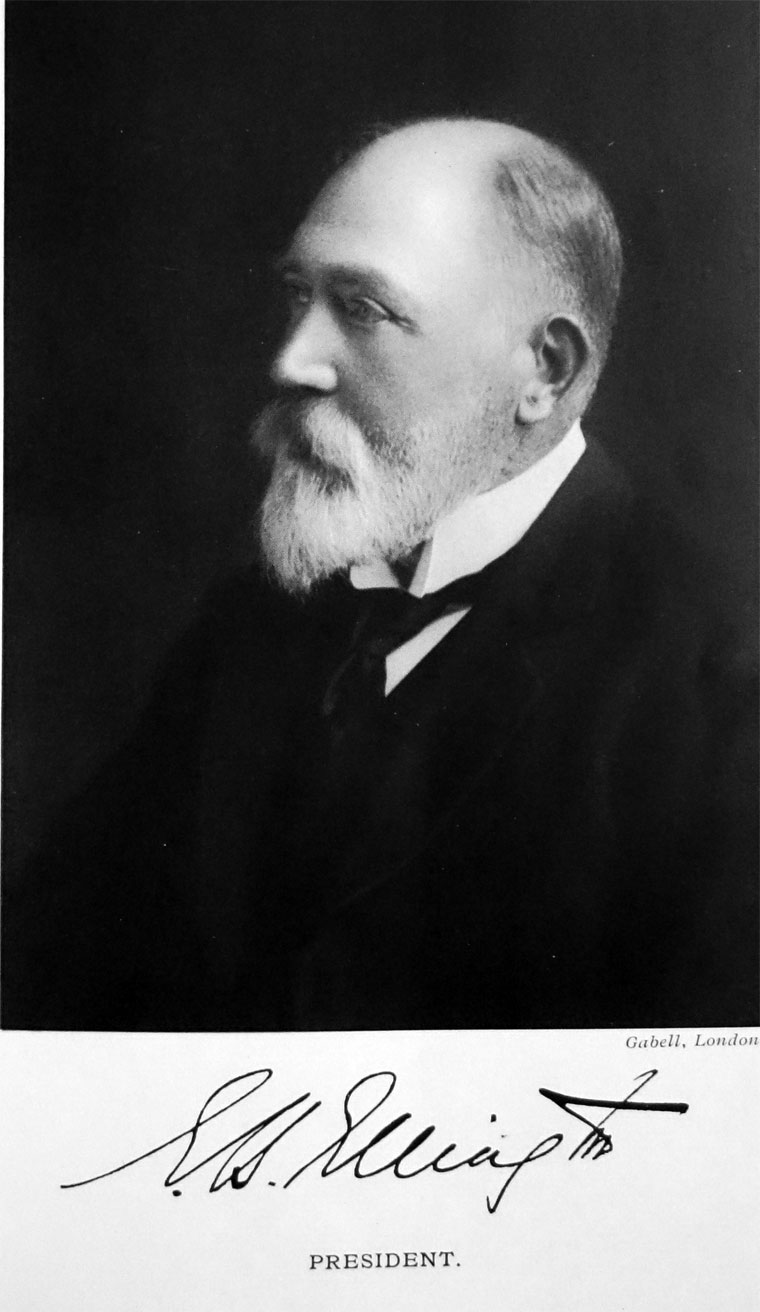 1845 August 2nd. Born at Camberwell the son of Henry Ridley Ellington, a warehouse man of the firm Ellington and Ridley, and his wife Lucy

He was educated at Denmark Hill Grammar School.

1862 On leaving school he was articled to John Penn of Greenwich. He stayed there until 1868, and was involved in erecting plant onboard ship, and attending trial trips. From 1867 to 1868 he worked in the drawing office.

1869 he entered into partnership with Bryan Johnson of Chester. The company, renamed Johnson and Ellington, began specializing in hydraulic machinery.

1875 they acquired the right to manufacture the Brotherhood three cylinder hydraulic engine. The Johnson and Ellington company was converted to a limited company named the Hydraulic Engineering Co.

1877 Initiated the Hull Hydraulic Power Co, the first company of its type. It was a pioneer which demonstrated the practicality of the idea on a large scale.

1882 he took a prominent role in the supply of hydraulic power to London, with the formation of the General Hydraulic Power Co of Southwark, London. He was appointed general manager and engineer, and remained in these posts until his death. The General Hydraulic Power Company formed subsidiary companies to supply power to Liverpool (in 1889), Manchester (in 1894) and Glasgow (in 1895).

He was also responsible for many inventions. The most important were the hydraulic balance list and the automatic injector fire-hydrant. His hydraulic power supply system was awarded a gold medal at the Inventions Exhibition in 1885.

He was President of the Institution of Mechanical Engineers in 1911-1912.

EDWARD BAYZAND ELLINGTON was born in London on 2nd August 1845.

He was educated at Denmark Hill Grammar School.

On leaving school in 1862, he became articled to Mr. John Penn of Greenwich, with whom he remained until 1868, being engaged during the latter part of his apprenticeship in erecting plant on board ship and in attending trial trips.

From 1867 to 1868 he worked in the drawing office. Shortly after he was given responsible work to do, being entrusted, amongst other jobs, with the ordering and arrangement of boiler piping and fittings for H.M.S. "Volage." He also superintended for twelve months the erection of the building known as Glengall Wharf, Old Kent Road, and the special machinery in use there.

In 1869 he entered into partnership with Mr. Bryan Johnson of Chester, the title of the firm being changed to Messrs. Johnson and Ellington. Mr. Johnson had been engaged in the construction of milling and mining machinery, but soon after Mr. Ellington joined him he began to specialize in hydraulic machinery.

In 1874 the firm acquired the right to manufacture the Brotherhood three-cylinder hydraulic engine, and the concern was converted into a limited liability company, with the title of "The Hydraulic Engineering Company."

In this connexion may be mentioned a direct-acting lift with a special balance arrangement devised by Mr. Ellington. This invention created smoothness in working and speed, and gave rise to a material saving in water consumption.

It was shortly after Mr. Ellington joined the Chester firm an Act of Parliament was passed, mainly owing to his efforts, for the distribution in large towns of water at high pressure for the working of passenger and goods lifts.

In 1872 he initiated the undertaking known as the Hull Hydraulic Power Company (which was the first concern to supply water power at high pressure), remaining the engineer to the Company until 1875, when he was appointed a director. The Hull Company, which was a pioneer scheme, proved the practicability of the idea on a larger scale, and in 1882 he took a very prominent part in connexion with the supply of hydraulic power in London, when the General Hydraulic Power Company, Ltd., of Southwark, London, was formed, of which he was appointed general manager and engineer. These posts he retained until his death. Similar companies under the control of the General Hydraulic Power Company were formed in Liverpool in 1889, in Manchester in 1894, and in Glasgow in 1895.

In connexion with his various schemes, Mr. Ellington was responsible for many inventions, the two most important of which were the hydraulic balance lift and the automatic injector fire-hydrant. His system for hydraulic power supply was awarded a gold medal at the Inventions Exhibition in 1885. Besides his Paper on "Hydraulic Lifts," read in 1882, be also contributed one on "Hydraulic Power in Towns: Glasgow, Manchester, Buenos Aires, etc.," in 1895, giving particulars about design, arrangement, sources of supply, methods of registration, efficiency, etc., in each of the towns.

In 1911 he delivered his Presidential Address, in which he emphasized the necessity for young engineers joining this Institution to have suitable training. His remarks led to the present system of examinations. In the same year this Institution held its Summer Meeting in aria, and one at Belfast the year after, both of which he contrived by his personality to make most successful. In 1913 he was selected to deliver the first "Thomas Hawksley " Lecture, and he chose for his subject "Water as a Mechanical Agent," giving a valuable précis of the use of water power from the earliest times to the present day.

Mr. Ellington was elected a Member of this Institution in 1875. He was a Member of Council from 1898 to 1903, a Vice-President from 1903 to 1911, and President during 1911-1912. It was during his Presidency that the extension of the Institution Building was put in hand. He acted for a long time as Chairman of the Building Committee with most untiring devotion, which was, in fact, the case in connexion with everything pertaining to the interests of the Institution.

He was also a Member of Council of the Institution of Civil Engineers, which he joined in 1882; a Membre de la Societe des Ingenieurs Civils de France, and a Governor of the Imperial College of Science and Technology.

His death took place in London on 10th November 1914, at the age of sixty-nine.