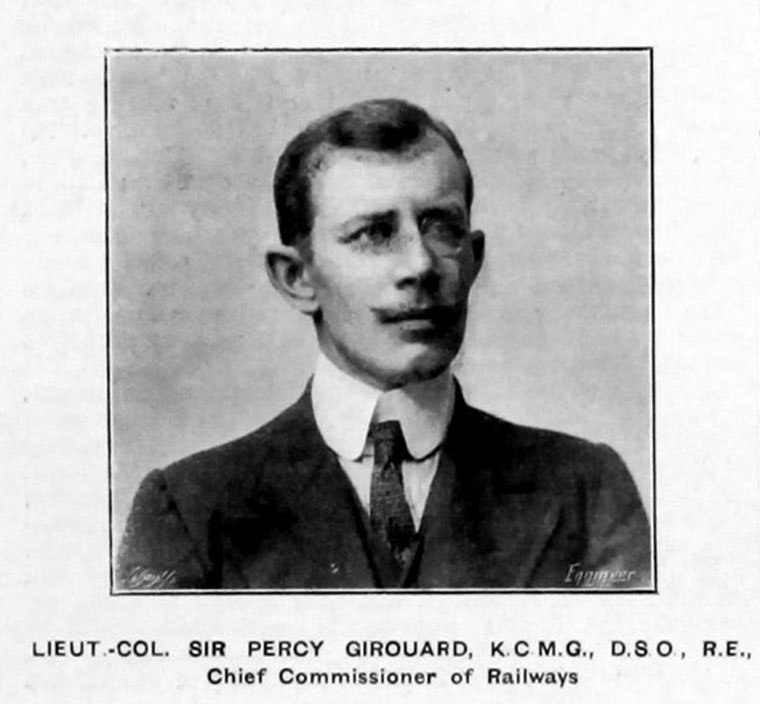 Regret will be felt in wide circles at the death, which occurred on Monday last, of Col. Sir Percy Girouard. Sir Percy was one of the sons of our Dominions who had the good fortune to form a living link between many parts of our Empire. A Canadian by birth and early training, it was merely due to a temporary shortage of Royal Engineer officers here that he obtained a commission and was gazetted to the Corps in 1888. He was soon picked out for special work, and in 1890 was appointed traffic manager at the Royal Arsenal, Woolwich.

Five years later he was seconded to the Egyptian Army, having been selected by Sir H. Kitchener to take charge of railway construction for the Soudan Campaign. The notable success of this undertaking was admittedly due to excellent organisation, seconded by rapid railway construction, the rate at which the line was pushed forward reaching a hitherto unheard of speed due to the energy which Sir Percy brought to bear on his side of the work. For his services in this connection Sir Percy received the D.S.O. and was gazetted Captain and Brevet Major.

He was subsequently President of the Egyptian Railway Administration, but had not held this appointment long before he was again called upon to undertake the Directorship of Military Railways, this time in South Africa, where during the campaign under Lord Roberts and Lord Kitchener he rendered most valuable services, which contributed greatly to the success of Lord Roberts’ march on Pretoria and to the other developments following upon this. At the conclusion of hostilities he remained to become Commissioner of Railways for the Transvaal and Orange River Colony, during which appointment he was responsible for their reorganisation from a military to a civil system. Subsequently, of course, these were absorbed into the one large system for the whole of the Union of South Africa.

The South Africa campaign was the last of Sir Percy’s active military service, for after some time at home he was selected for the position of High Commissioner, and later Governor, of the Protectorate of Northern Nigeria. Here he did excellent administrative work, on the lines successfully adopted by Lord Lugard whom he followed, and , carrying on the process of development to the great increase of trade, prosperity and security. After little more than two years, in which his energy had resulted in the rapid extension of the Bari-Kano Railway, he was transferred in 1909 to East Africa, where again, as Governor, his work proved successful and popular, so much so in fact that when for private reasons he felt forced to resign in 1912, the Colonial Office was appealed to in the matter. On his return to this country, Sir Percy became a director of Messrs. Armstrong Whitworth and Company, Limited. At the beginning of the war he was early made a Director-General of Munitions Supply, but he later relinquished this to devote himself to the work of the great Elswick firm.

It is the proud boast of the Dominion of Canada that during the Great War her sons were in the forefront in the great effort we made. Sir Percy Girouard came upon the scenes earlier, but his distinguished services to the Empire are no less typical of the talent on which it is the privilege of the Mother Country to draw at time of need. As a man he was full of energy, always approachable, and popular with his staff, who felt that under him they would never be let down."