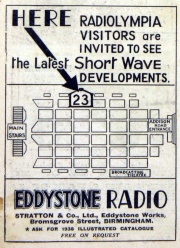 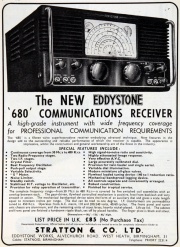 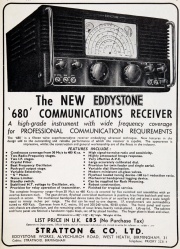 Originally known as Eddystone Marine Radio, radio receivers made by Stratton and Co of Birmingham.

1965 Marconi acquired Eddystone Radio from Stratton and Co, which wanted to exit the radio business.

Eddystone Radio also made diecast aluminium boxes for use by amateurs and electronics companies. This arose from the way that Eddystone built the sensitive parts of their radio receivers as an assembly of screened diecast boxes. Having invested in the dies, they maximised the return by selling the boxes to distributors of electronic components such as STC Components, Radiospares and Maplin Electronics.

1973 The last valve set was manufactured. At about this time Marconi decided that Eddystone Radio should pull out of the High Street and concentrate purely on professional receivers.

The H.F. receiver market was starting to shrink due to competition from the Far East. The size of ships grew, requiring fewer radios. The ocean liner "cabin set" market vanished in the new "air travel for all" regime. Satellite communication became a practical reality.

c.1980 The company entered the broadcast transmitter field in partnership with the BBC. This was very successful and took things into the 1990s when Eddystone and the BBC pioneered the new Digital Audio Broadcasting (DAB).

1995 The lease on the premises at the Bath Tub expired and the company relocated to a small industrial estate in Selly Oak, within the City of Birmingham, ready to take up the digital challenge. Unfortunately the expected expansion did not materialise.

The end of the cold war had seen a big drop in government orders and the increase in satellite communication further reduced the demand for professional HF receivers. Combined with an economic crash in Malaysia, where a large VHF/FM broadcast transmitter order was cancelled, this spelled the end of Eddystone's ownership by Marconi, itself in a parlous state.

1999 The firm was bought by Megahertz Communications. After three years in the doldrums Megahertz went into receivership and Eddystone Radio (receivers) was sold to Ring Communication; the Transmitter section was sold to SBS of Hastings and is now known as Eddystone Broadcasting.