Grace's Guide is the leading source of historical information on industry and manufacturing in Britain. This web publication contains 140,061 pages of information and 227,378 images on early companies, their products and the people who designed and built them. 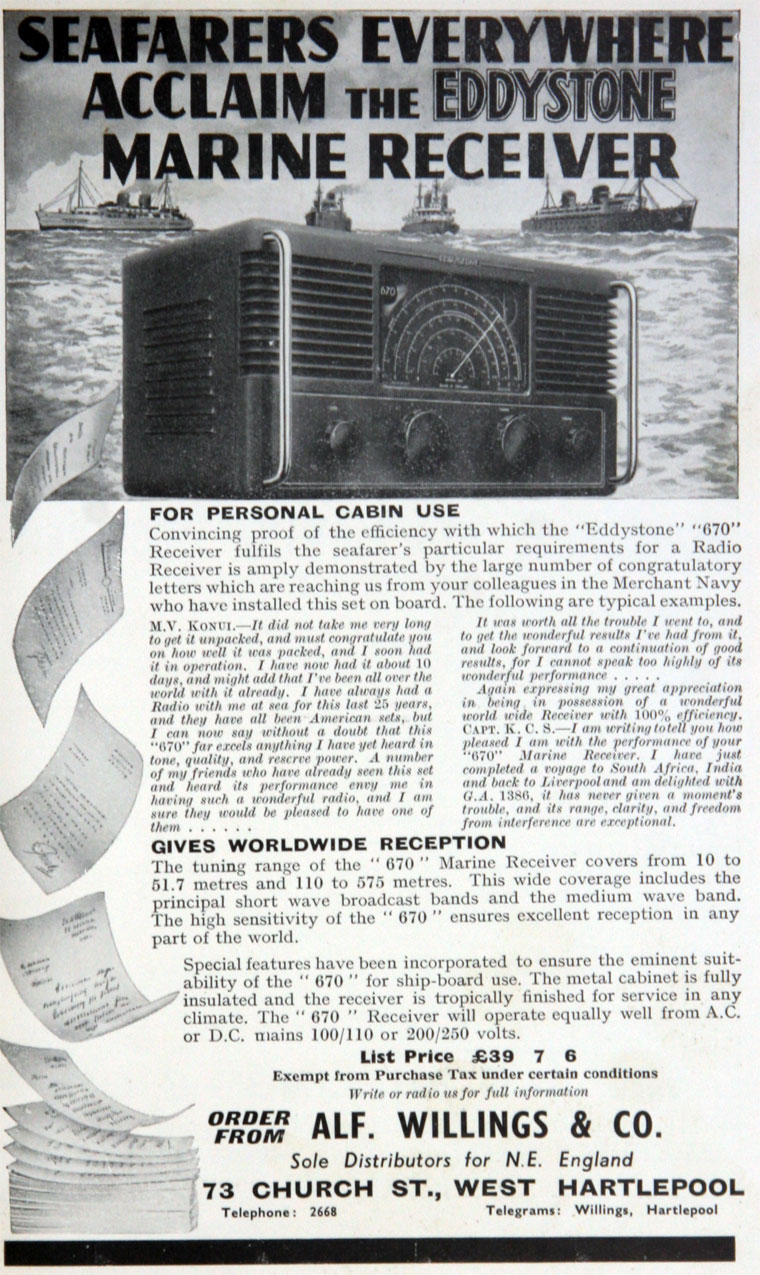 Manufactured by Stratton and Co of Birmingham

1925 Stratton’s first radio-related patent was filed in February, as was the Trademark Eddystone and the Lighthouse device. Stratton’s took on Harold Cox and Arthur Edwards during this period and these two were to provide a driving force for the next forty years. Harold became Technical Director and Arthur became Sales Director, continuing with the firm until the late 1960’s.

1927 Short waves were well established across the world, due to the pioneering work of early radio amateurs. One of these was Gerald Marcuse, who obtained a permit from the British Postmaster General to transmit speech and music to the British Empire. The first transmission was on 11 September and the experiment continued for almost a year. The BBC also started experimental broadcasting on 20 metres from G5SW, Chelmsford (Marconi) in November 1927. The result was a demand for shortwave receivers from British expatriates. Stratton and Co were ready to fill that need and produced what is believed to be their first short wave set, the Atlantic Two.

1930s The company had ceased making medium wave-only sets and from then on everything was focused on the higher frequencies. Sets were produced by the company in bewildering variety. Eddystone receivers were used by many scientific expeditions of the 1930s, such as the British Arctic Air Route Expedition and the Hudson Strait Settlement Expedition.

1935-38 Work started on VHF experiments and portable Eddystone five-metre equipment was used by the 1936 Mount Everest Expedition. During the years 1935-8 much effort was made demonstrating to the police and military to gain acceptance of VHF equipment for use in cars and tanks, but without success.

1939 The London Metropolitan Police Authority covering some 95 police stations and Scotland Yard, sent an urgent request to Stratton and Co to tender for an automatic wireless telephone network. This was accepted, and work commenced day & night to complete the system for July.

1940 The factory was bombed and destroyed on 26 October.

WWII. During the war no further damage took place and over 4.5 million components for use by H. M. Forces were manufactured. Just over 4,500 transmitters, 7,264 receivers and 45,000 other supplementary pieces of equipment were supplied, for Police, Army, Royal Air Force, but mainly Admiralty requirements.

Post-WWII. After the war, times were difficult in the radio business. War surplus depressed world markets. A major decision, perhaps an error, was made not to re-enter the VHF two-way radio field. It was decided to concentrate on specialised communication equipment, well constructed for performance and stability and selling on these points rather than price; a policy which brought success for many years.

1964 George Abe Laughton died and the company reached a crossroads. Eddystone Radio was the odd man out in a family company that produced goods for the cosmetic market and the Woolworth’s trade. The family felt that the communication business had grown in complexity beyond their understanding.

1965 A decision was made to sell the radio business to one of their largest customers, Marconi. Solid state was just starting. It was to overlap valve production by about a decade.

1973 The last valve set was manufactured. At about this time Marconi made a policy decision that their subsidiary, Eddystone Radio, should pull out of the High Street and concentrate purely on professional receivers.