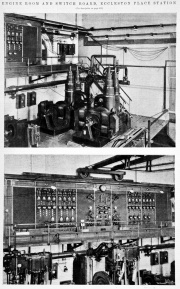 Initially there were two 33 kW sets with Willans and Robinson engines driving Siemens Brothers dynamos. These were soon followed by two 67.5 kW Crompton dynamos driven by Davey, Paxman and Co vertical compound engines, and then two 120 kW Crompton dynamos driven by 200 IHP Willans and Robinson engines running at 355 rpm. Four of the boilers were made by Fraser and Fraser, three by Davey, Paxman and Co. Battery: 56 Crompton-Howell cells, each having a capacity of 500 amp-hours.

An interesting aspect concerns the water supply for the condensers. It intially came from a sump which collected rainwater from the roof of Victoria Station. The company laid a pipe from there to the power station along Buckingham Palace Road. To cater for increased demand, another supply was taken in 16" pipes from the Grosvenor Canal, 500 yards away.

The above information is drawn from 'The Early Days of the Power Station Industry' by R. H. Parsons, 1939.

The following information is from 'The Engineer' in 1892:-

'The exhaust pipes are of cast iron, 15in. diameter, and pass between the large foundation block and the wall of the engine-room, and thence by a pipe, 22in. diameter, to the chimney, which is 150ft. high. Tbe pipe is carried up to the top of the chimney. The branches from the engines are brought into the main at an acute angle, in order to avoid the vibration which is set up when they enter it at right angles. A condenser is already fixed, but has not yet been used.'[1].

Between 1899 and 1902 the company changed the system of direct-current steam-generation at its 3 stations to motor-generator operation.[2]