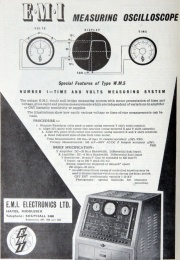 1955 EMI formed a controlling and coordinating subsidiary, EMI Electronics Ltd, to lead the expansion of business in commercial and industrial electronics (but not government business); the company was previously known as Emitron Television Ltd; it would absorb EMI Engineering Developments, EMI Factories, and EMI Research Laboratories[1]

1957 Built the company's first computer product, the EMI Electronic Business Machine, in response to an order from the British Motor Corporation for a computer to process its payroll. The computer used approximately 2000 valves, and magnetic cores/transistor circuits for the input/output circuits. It was the first electronic computer installed in England making full use of magnetic tapes and drum for memory, thereby enabling all the required final data to be obtained from one single processing of a departmental pay unit.[2].

1958 The EMIDEC 1100, Britain's first transistorized computer, was developed at Hayes under the leadership of Godfrey Hounsfield.

The company won a contract from NRDC to develop a transistor-based computer, which came to fruition as the EMIDEC 2400.[3]

1960 Delivered first batch of all-transistor computers, the EMIDEC 1100. Developed simpler industrial control for machine tools. Delivered television cameras to the BBC, Associated-Rediffusion and A.B.C. Television. Delivered closed-circuit television systems to a variety of users, including for traffic control, for use by stockbrokers on Wall Street, and to an advertising agency. Increased range of domestic appliances under the HMV brand. Greatly increased demand for Emitape recording tape, including for video[4]

1962 Received orders for EMIAC II analogue computer from Oxford University[5] and later in the year from BP. Agreement with Lede Ltd of Bracknell to manufacture and market the eye-movement apparatus developed in EMI's psychological research laboratory[6]

1966 In conjunction with W. C. Youngman, delivered a fleet of automatic guided vehicles to Cadbury's factory at Bournville[7]

Also had a unit at Wells, Somerset and later at Woking.