1870.Packing Machinery at the Warehouse of Alexander Collie and Co, Manchester. 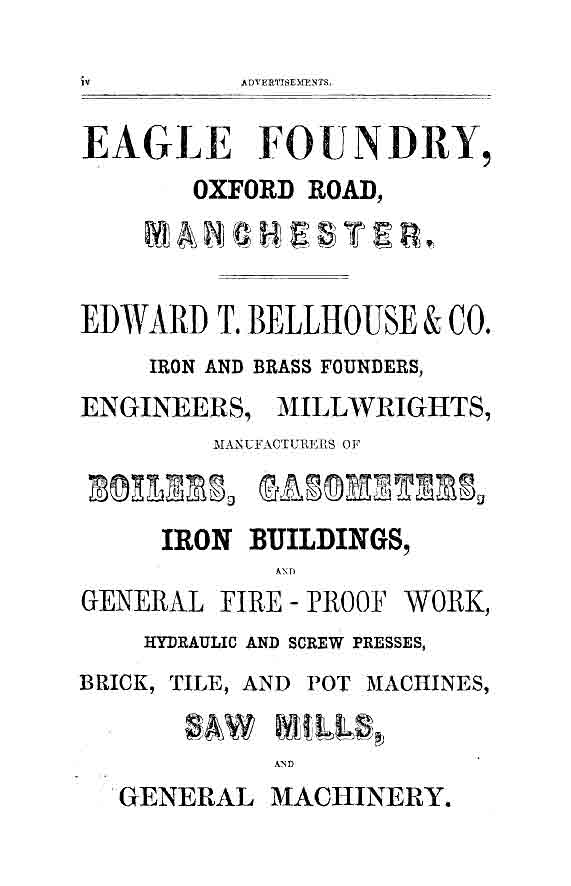 Detail of hydraulic pump at Manchester's Museum of Science and Industry

Three cast iron skew bridges made for the Manchester, South Junction and Altrincham Railway in 1848-9 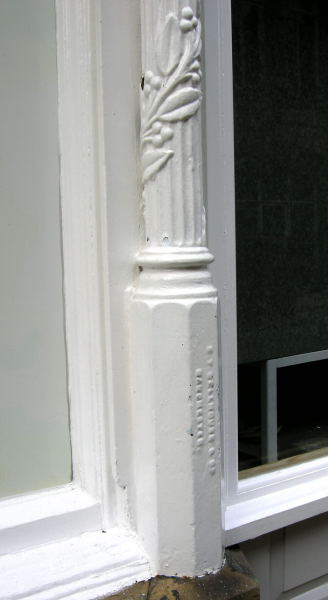 1845 Registered a design for fire-proof doors for hoists in mills, warehouses and other buildings.[1]

1853 Patent for improvements in iron structures [2]

1853 Patent for improvements in steam boilers [3]

1853 Patent for improvements in pressing and extracting fluids [4]

1853 Described as makers of hydraulic presses and iron houses [5]

1855 Patent for improvements in the manufacture or working of marble, stone, glass etc to John Knowles, marble merchant and Edward Taylor Bellhouse, engineer. [6]

Gas works for Buenos Ayres constructed by Bellhouse under the superintendence of William Bragge.[8]

1870 Description of packing machinery made for the cotton textile warehouse of Alexander Collie and Co in Manchester (steam engine, boilers, cisterns, hydraulic pumps and presses, shafting, gears, etc.[12]. See above for illustration of hydraulic pump.

'BOYDELL'S TRACTION ENGINE IN MANCHESTER.— On Wednesday, a trial journey from Manchester to Oldham was made with a new traction engine, which has been manufactured by Messrs. Edward T. Bellhouse and Co. of Manchester, to be sent out to Rio de Janeiro, for Messrs. Carruthers, de Castro, and Co. The engine, weighing about 15 tons, with a train of six waggons, loaded each with two tons of iron, making the whole a weight of 45 tons, was taken from Zara-street, through the streets of the city to Oldham Road and on to Oldham. The engine performed its duty well, proceeding at the rate of two and three miles per hour, and turning sharp corners with facility and accuracy, answering to the will of the steersman with wonderful promptness. The steep hills at Oldham were ascended a pace of above two miles hour with the heavy load, and one of the inclines mounted was at a rise of seven inches in ten feet, or a gradient of about 1 in 17. The performances of the engine at Oldham were witnessed by Messrs. Brunlees, C.E.; Webb, C.E.; Fox, C.E.; Palmer, of the firm of Platt Brothers; David Doig, E. T. Bellhouse, and others; and seemed to be considered highly satisfactory.'[16]

'The traction engine made by Messrs. E. T. Bellhouse & Co., the experimental trip of which to Oldham was made a few months since, has safely arrived at Mauá, near Rio de Janeiro. The ascent from Mauá to the city of Petropolis, 3,000 feet high in a length of eight miles, was achieved successful, and the very sharp angles were turned with ease and precision. This is probably the first instance of a traction engine for common roads having ascended so great a height.'[17]

In Brazil, the engine was attended by Robert Milligan, C.E., Managing Engineer of the Maua Railway.[18]

The 1849 O.S. map shows that the foundry was close to the western end of Hunt Street (now Whitworth Street) and backed onto the Rochdale Canal. Immediately west was the Eagle Mill, with a timber yard to the right.

Goad's Insurance Plans Map 19 dated 1886 (updated c.1901) shows the foundry as still being in use by Bellhouse & Co. Their immediate neighbours were A. L. Bostock (spinning mill) to the west and Galbraith and Co's shipping warehouse on the eastern side. Directly opposite at this time was Bloom Street Power Station.