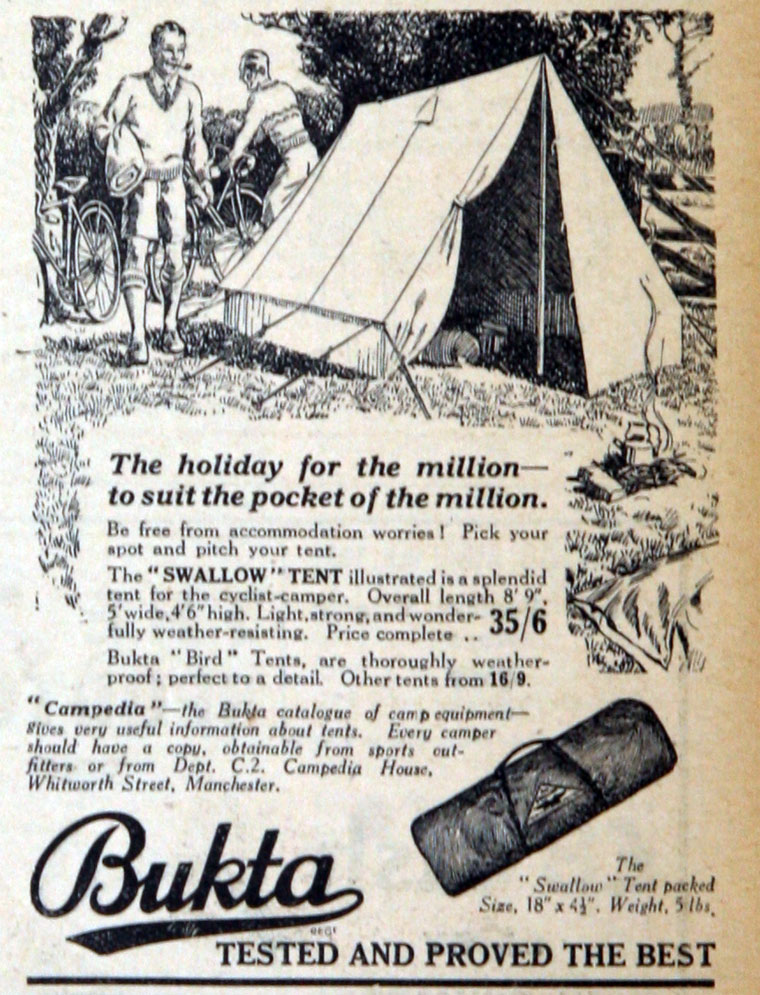 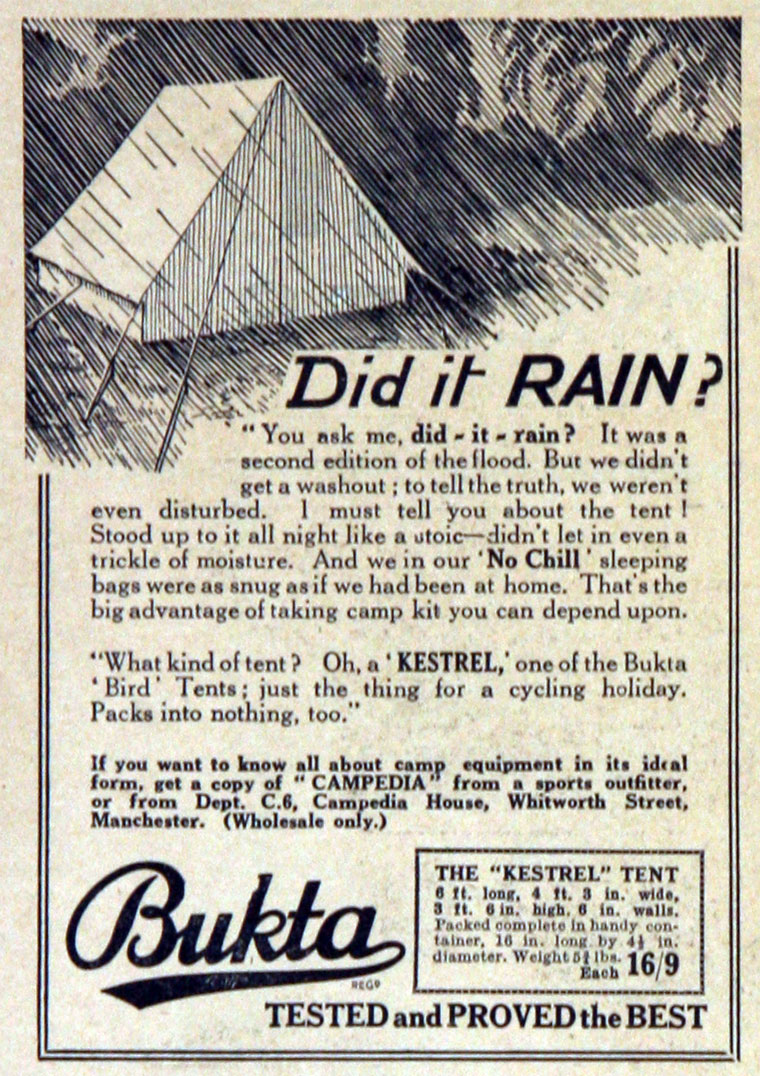 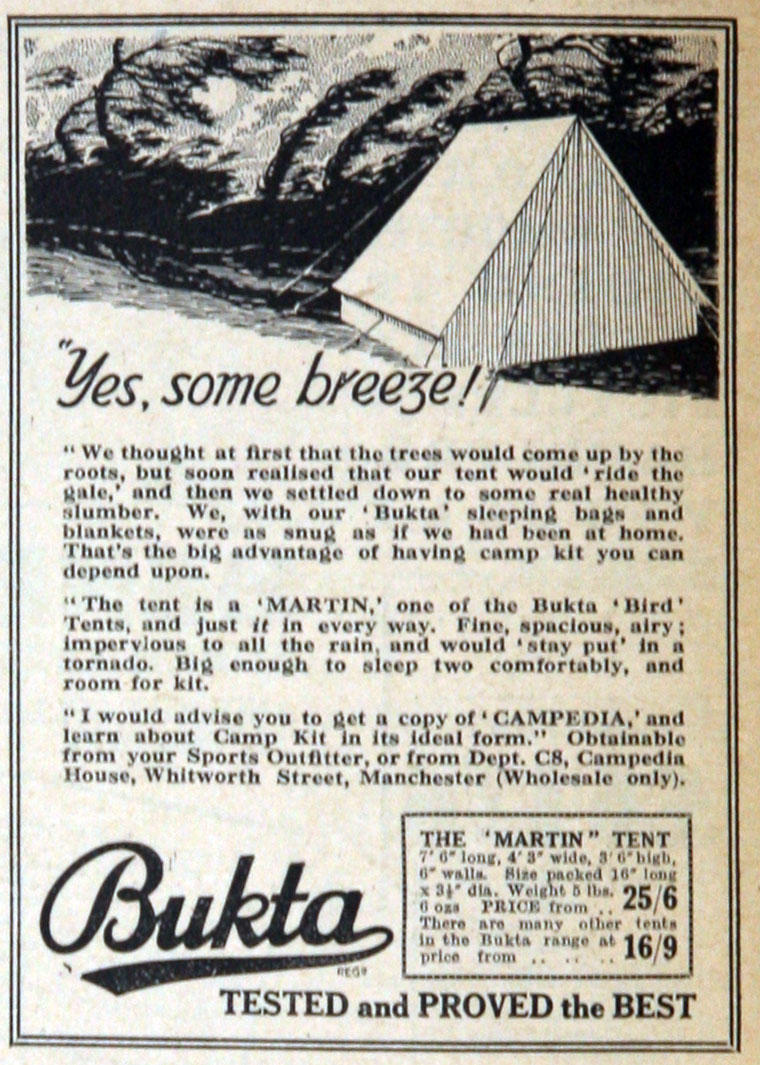 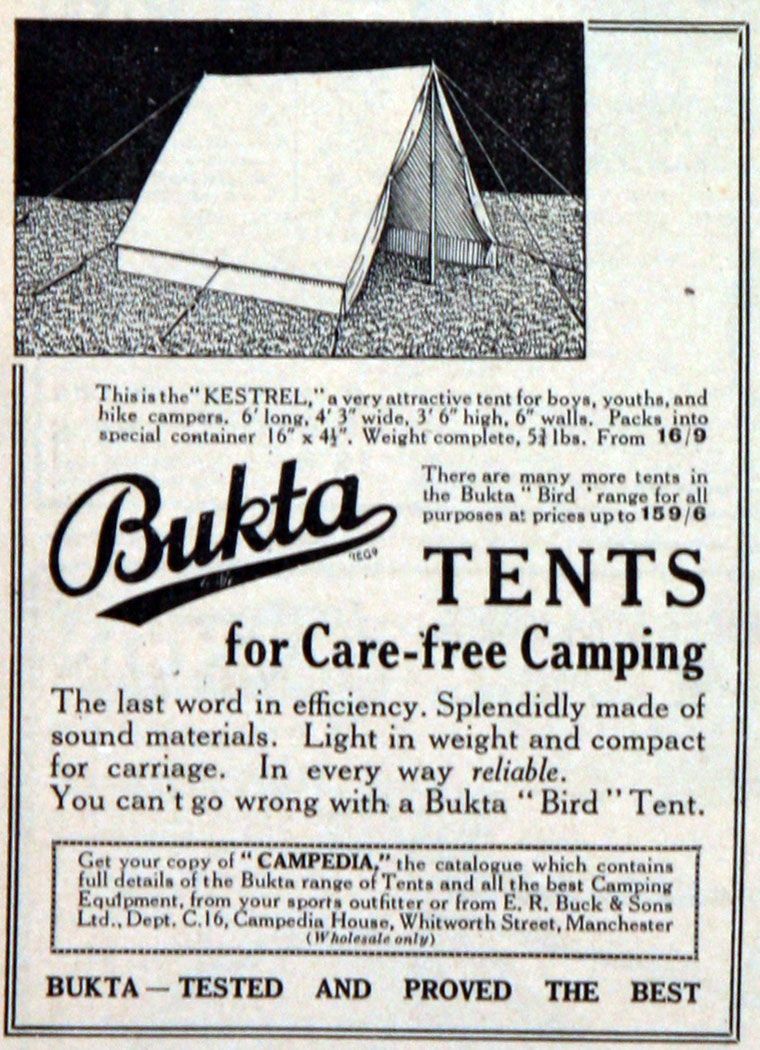 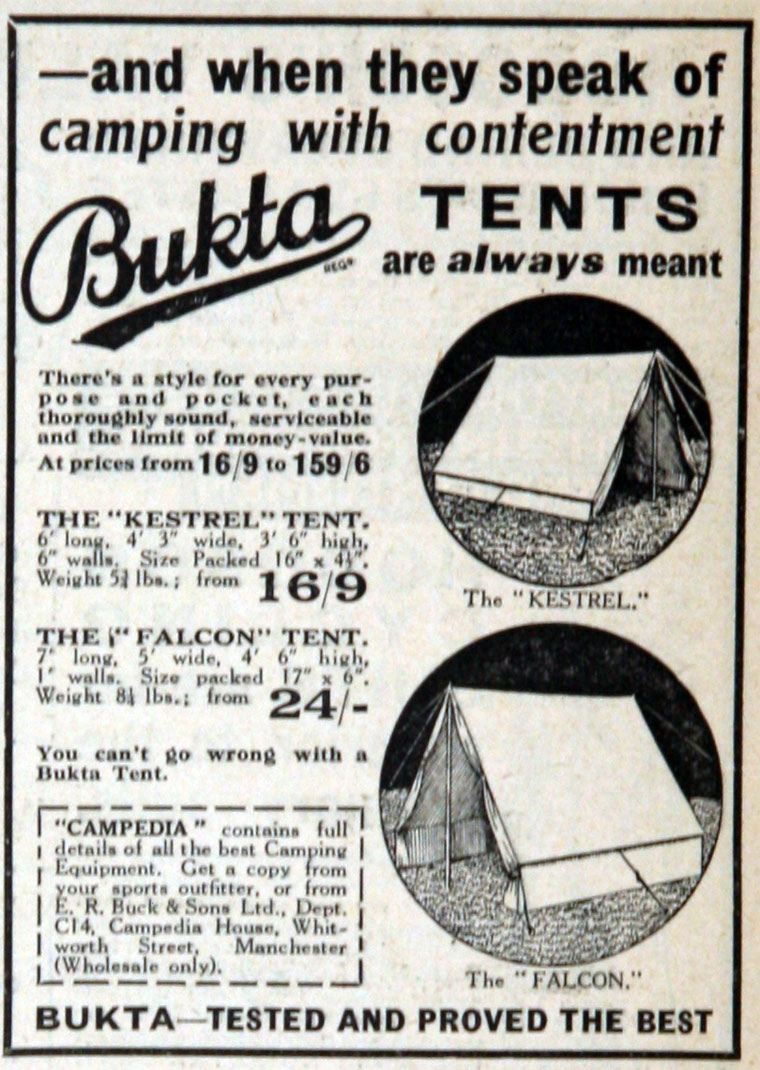 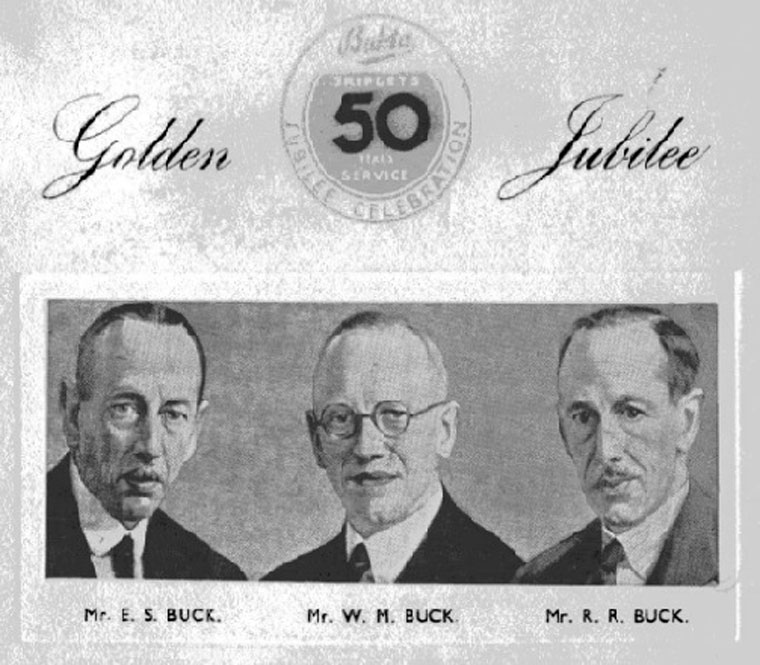 1949. The programme for the Jubilee celebrations. 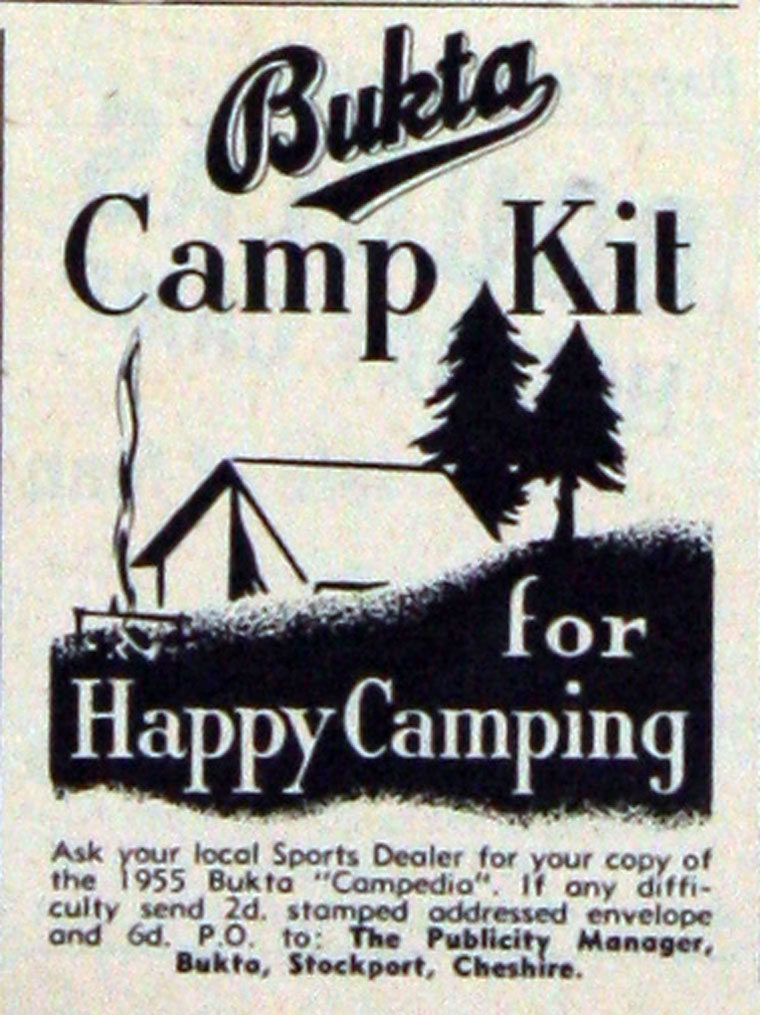 The camping showroom in the Stockport factory. (Note 1).

Inspecting sportswear is Nat Lofthouse, among others from Bolton FC. (Note 1). 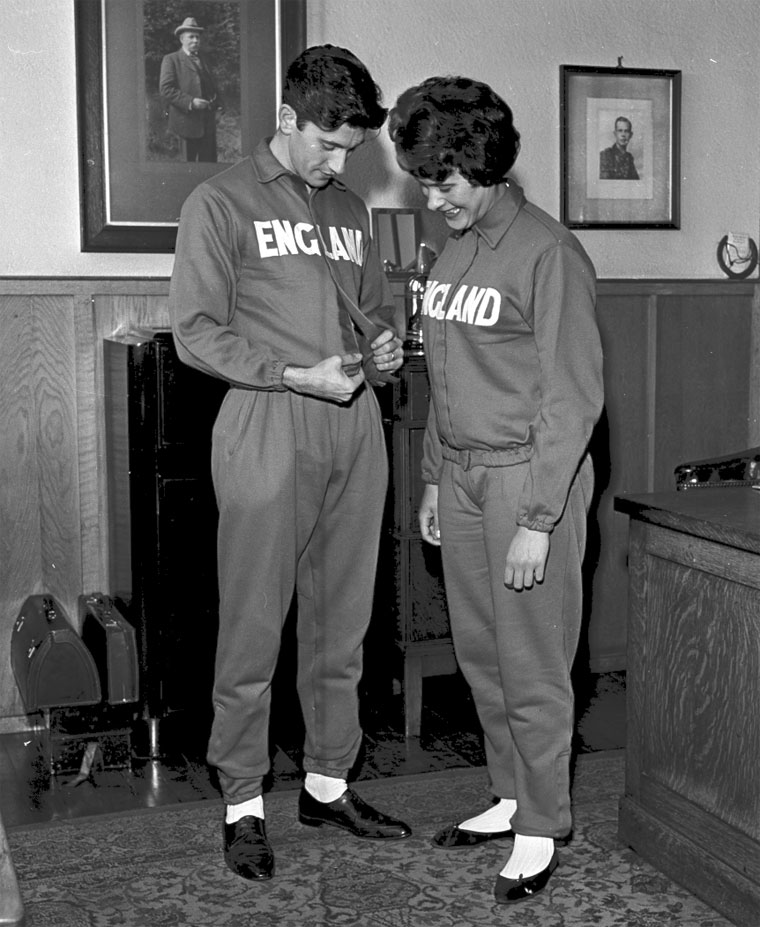 Edward Buck began as a shirt manufacturer in Dalston, Carlisle. He moved with 12 staff to Marble Street, Manchester, later to a cellar in Portland Street with steam treadle machines and 30 staff.

There were further moves to Hilton St., Dale St., and London Road as the company expanded. He set up a factory at Woodside, Poynton, Cheshire. Here they were able to use the coal from the colliery to power the machines.

Buck’s international reputation began when he made silk underwear and twill shorts for soldiers in the Boer War.

The Company eventually had offices in London and factories in Nottingham, Stockport and Carlisle E. R. Buck was the first manufacturer in the world to design the printed striped football shirt and in 1884 Nottingham Forest FC became the first team to wear his football kit. The team would have paid 16/- a dozen for the football knickers in serge or twill. In comparison silk athletic running knickers cost £3.0.0d a dozen. In addition, Bukta produced knitted swimwear, cricket, tennis and boating trousers.

The triplets were born in 1883 in Whalley Range, Manchester and educated at Macclesfield Grammar School. Robert Robinson B and Edward Stanley B joined the company in 1899. The third triplet, William Maxwell B, joined in 1903, aged 20. All 3 became directors with William becoming the MD. When Baden Powell formed the scout movement in 1907 he met Edward R. Buck, who agreed to provide the scout uniforms. He died in 1912 but Buck’s descendants continued development and by 1919 Bukta produced its first scout tent – designed to be fastened to a tree!

Around the early 1920s the Poynton factory in Cheshire was flourishing, employing about 200 people. Dye-fast colours were introduced, and the Company regularly produced football and rugby shirts for most of British professional teams. They called their rugby shorts 'Neverip!!'

Around 1930s Bukta extended their camping range and held the first exhibition in Hope, Derbyshire In 1934 an expedition to conquer Mount Everest set off with Bukta camping equipment.

In 1933 the triplets celebrated their 50th birthday and thanked their employees by taking them all (by train) to Blackpool – a trip that was to be repeated in 1949.

In 1939, No 3 Ring Mill on Brinksway, Stockport was purchased, but the Poynton factory, was not vacated until 1943.

Both world wars were good for the Bukta company. They made tens of thousands of shirts for the war office, white shorts for the Far East Admiralty and parachutes for the RAF.

In 1949 a 50th Jubilee party celebrating the triplets’ 50 years service was held. It was lauded in the local and national press, including such long gone publications as Harpers Sports & Games, Sports Dealer, Outfitter, Daily Herald, News Chronicle, and the Daily Dispatch. The family also received congratulations from the King and Lord Derby.

At this time the board was run by cousins, rather than the triplets.

By 1968 the Board at Bukta had decided computers were the future and they ordered just one! Members of the Buck family were still involved until 1982 when the company name was sold. The name is still in use, however the clothes are based on fashion, rather than sportswear.