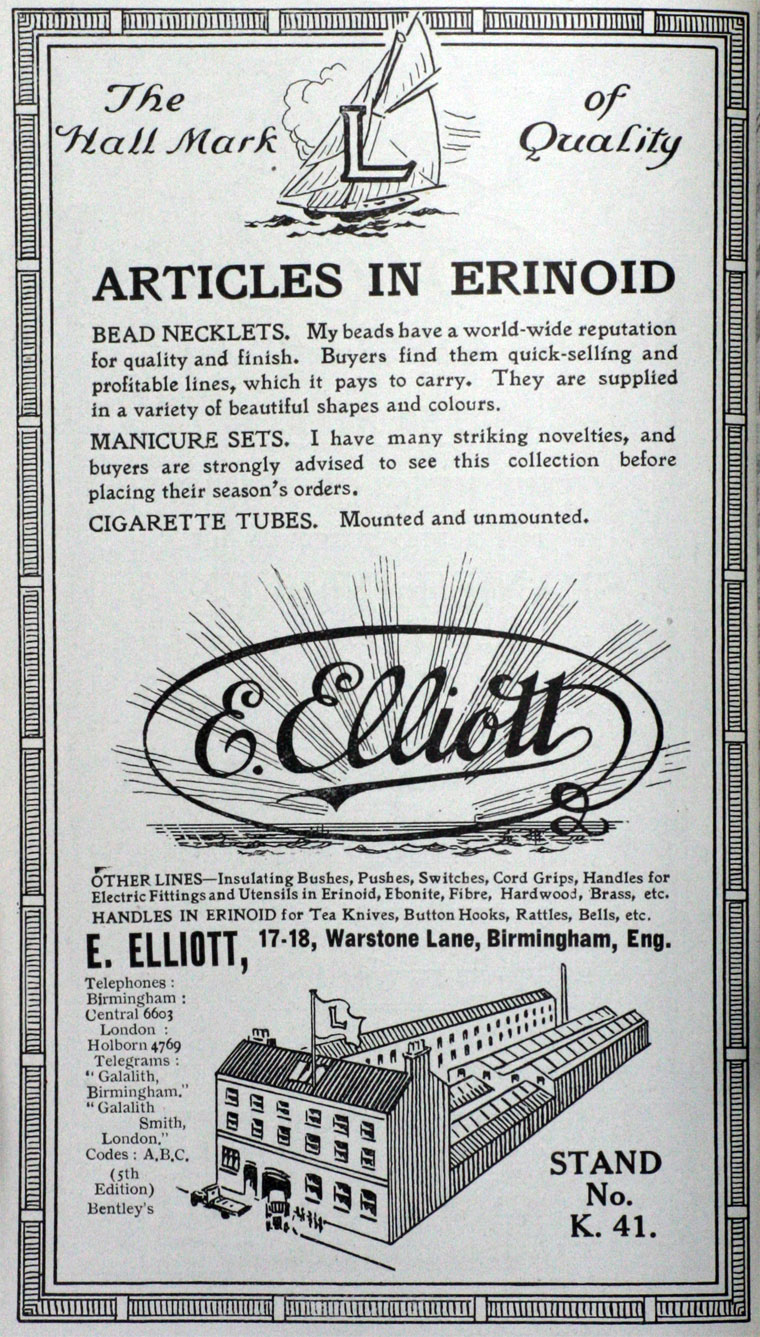 1878 Edwin Elliott was born in Birmingham. He started work in a machine shop before going into the jewellery trade, but his eyesight was not up the task so he became office boy at the Birmingham branch of a firm from Hamburg. He learned German at evening class, also with the help of two Austrian friends.

1903 One of them returned to Austria and Edwin took over his job which was selling imitation jewellery stones.

1909 Elliott started his own business in Frederick Street, Birmingham, as an importer and manufacturer's agent, Galalith casein plastics material being one of his imports. He soon began machining the material to his customers' requirements. He was also agent for a manufacturer of spectacle lenses.

1911 He bought them out and developed it into The British Optical Lens Co. Supplies of Galalith dried up because of the First World War but fortunately Erinoid had just started to make casein plastics in England.

1916 Elliott moved to larger premises in Warstone Lane which took both sides of his business under one roof. After the war, the company expanded the machining of Erinoid casein into beads, knobs, manicure sets, etc. and started to produce compression mouldings in Bakelite.

1926 The Warstone Lane premises soon became too small so the company moved to premises in Brearley Street. Here their first transfer moulding press was installed and Elliott's became one of the largest suppliers of radio components, claiming to be the first large scale producer of moulded radio cabinets for Telsen in 1928.

1933 saw the installation of an Isoma injection moulding machine - the first of its kind in Britain.

1935 To cope with demand, Elliott's bought the moulding section of Messrs. Harrison (Birmingham) Ltd. in Cheapside, which became a private limited company.

In addition to custom moulding, a range of items under their own trademark (L-yacht) were produced. Optical and moulding sides of Elliott's business combined to produce cameras, from the 1930s to the 1950s, such as the VP Twin, with its BOLCO (British Optical Lens Co) lens - he also moulded cameras for the neighbouring Coronet, including the Midget and Vogue, and in turn bought shutters from K. G. Corfield for the VP Twin camera. Optical and moulding operations also combined to produce self-selection spectacles for sale in Woolworth's (this was eventually stopped by the Optician's Act of 1958).

1940 The optical department at Summer Lane received a direct hit with incendiary and suffered considerable damage.

1941 A second bomb also destroyed much of the moulding side (including all company records) - all machinery that could be rescued was transferred to Bescot Crescent. The Summer Lane factory was re-built.

1983 Acquired by the Reed International Group. The company name was changed to Elliott Moulders (Electronics) Ltd

1986 Name changed again to Caradon Elliott Ltd when the Reed Building Products Division was subject to a management buyout and became Caradon plc.

1987 Elliotts was part of Caradon Plastics. Manufactured mouldings by compression and thermoplastic injection at the Walsall factory; main customers were in the electronics industry, especially IBM UK[5]

2000 Elliott Plastic Components Ltd put in the hands of an administrative receiver.