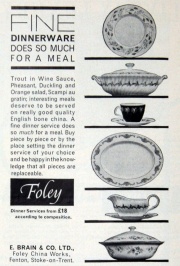 There had been a pottery at Foley in the eighteenth century, owned by Joseph Myatt, who made wares somewhat in the style of Wedgwood. But the firm can only claim to have been in existence since 1850, (if they include the time the works were owned by Robinson and Son).

1885 The works were purchased by E. Brain, then a well-known figure in North Staffordshire.

At that time he was in partnership with a Mr. G. Hawker, but the latter withdrew after a short while and his place was taken as partner by the son William Henry Brain, a partnership which only terminated with his father's death in 1910.

Mr. Brain, Sr. was his own most energetic salesman. With an eye to the extending of his overseas markets he made business trips to Australia, New Zealand and Iceland, while a similar journey to China, the original home of fine china, was only frustrated by his death.

Under the direction of W. H. Brain the business continued to prosper and expand, particularly in the years before World War I, when he introduced new decorative styles which created such a demand that a minor revolution in design was effected within the trade, to be copied by many other firms.

c.1924, continued ill-health compelled Mr. Brain to semi-retirement, but he still maintained a keen interest in the good name of the firm and the welfare of his employees.

1931 Representative of the third generation, his son Eustace William Brain entered the pottery in 1931 and a few years later joined the Board of Directors.

Throughout their years of potting the firm specialised in bone china tea and breakfast wares of high quality and good design. After World War II they introduced the manufacture of china dinner ware, with good quality china hotel ware also being made, mostly for the great shipping lines.

A particular feature was that the factory gave training in the old art of flower-painting. Floral designs identified with the Foley factory are the Ming Rose and the Cornflower.

1962 Acquired the porcelain side of the business of Cauldon Potteries