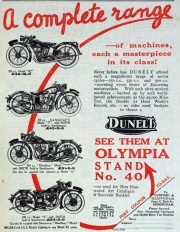 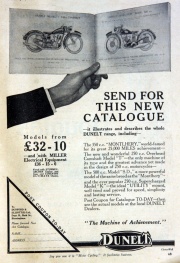 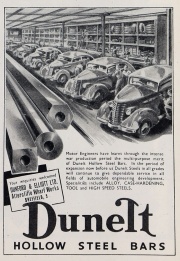 1919 Late that year Dunelt was first seen at the Olympia show, with an unusual 'supercharged' 499cc two-stroke single, produced at at time when experts felt two-strokes would never work above 350cc. Production was minimal.

1920 Production began in earnest with an engine that differed from most others. This was a 499cc two-stroke with a double diameter piston and cylinder. Whilst this improved compression, assembly proved tricky unless the compression ring supplied in the tool kit was used. Due to the design, acceleration was slow but the engine would pull well from very slow speeds. They were therefore ideal for sidecar use.

1923 The sole model was joined by three other versions with all-chain drive and light-alloy pistons.

1924 Tom Lawrence Williams joined the firm as a designer

1924 There were now eight versions, including outfits of commercial van, truck and box carrier types. They also used a three-speed Burman gearbox, but reverted to the Sturmey-Archer the following year. They broke many records, including the first cross-desert ride (Cairo to Siwa and back) that year.

1925 Saw the production of fire engine and milk truck variants.

1928 They broke the 'Double Twelve Hour World Record at Brooklands on a Model K.

1930 More models were produced, including a face-cam ohc type, but these were very noisy and were not a successs; particularly as it was the start of the depression years. A Dunelt, with a 498cc ohv engine, won the Maudes Trophy by covering 13,119 miles, at an average speed of just under 35mph, in 16 days on the Isle Man.

1931 Late that year manufacture was transferred from Birmingham to Sheffield. To reflect this change, machines were named Sheffield-Dunelt for a couple of years and then the name changed back to Dunelt.

1935 The range had dwindled considerably and that was their final year of production.

1956 A moped with the Dunelt name was shown at the Earls Court show.

1956 Dunelt was one of Tube Investments brands[1].

1957 The name made a brief reappearence for that year only. The neat and tidy two-stroke moped went on the market, but it was very short lived.

Sheffield-Dunelt were motorcycles produced between 1931 and 1933 by Dunford and Elliott, steel makers of Sheffield.

1931 Late in the year the firm transferred manufacture to Sheffield, from Birmingham, and produced a range of motorcycles with the name of Sheffield-Dunelt.

1932 The name continued for that year.

1933 By the latter end of the year the company reverted to Dunelt, as it was the name better known to the public.