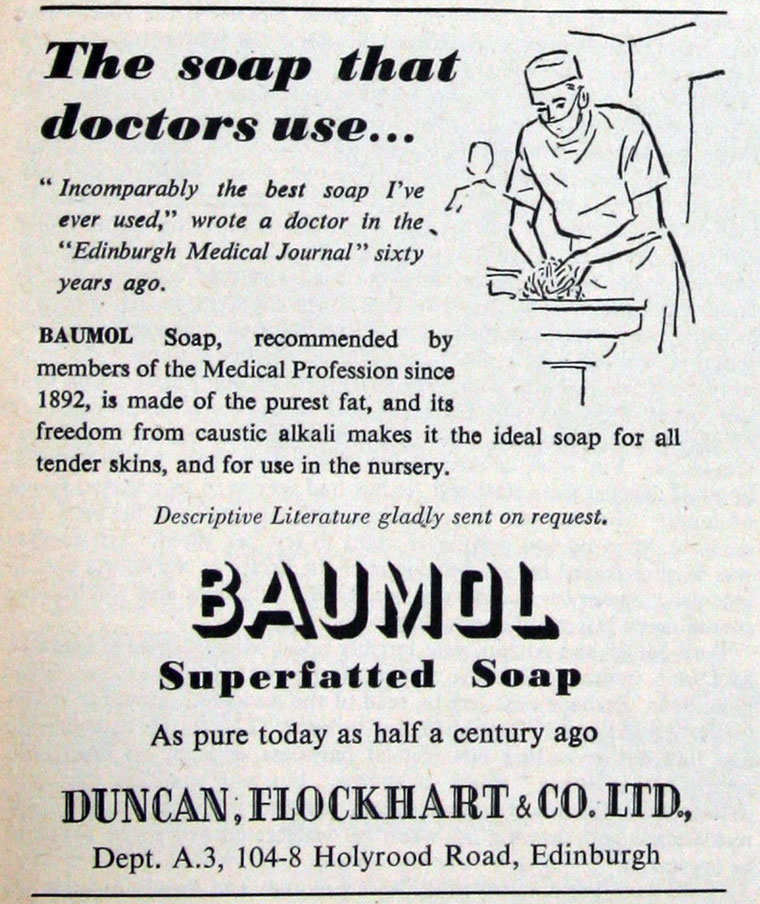 1954. From Good Housekeeping magazine of July.

John Duncan (1780-1871) was apprenticed to an Edinburgh apothecary. He then moved to London. Later set up business in Perth where he introduced 'modern' methods of packaging first practised in London (including the use of small boxes and jars for medicines).

c.1820 John Duncan moved back to Edinburgh, opening an apothecary's shop in North Bridge as Duncan and Ogilvie. Set up a laboratory for testing manufacturing processes under the arches of the bridge.

1833 Duncan took one of his most able apprentices, William Flockhart (1808-71), into partnership

The shop of Duncan and Flockhart became one of the centres of Edinburgh medical society.

The firm began to manufacture drugs

1847 Supplied chloroform to James Young Simpson for his famous experiments on anaesthesia. So rapidly was this technique adopted, especially in Scotland, that anaesthetics became one of the firm's principal product lines.

At Simpson's expense the firm supplied large quantities of chloroform to Florence Nightingale.

From 1862 to 1875 the firm were "Chemists and Druggists in Ordinary" to the Queen, supplying medicines to Balmoral.

1876 Opened a factory in Holyrood Road, supplying vaccines as well as anaesthetics.

WWI opened a drug farm at Warriston, Edinburgh which continued in use until after WWII.

1962 With another Scottish company, Macfarlan Smith, formed a new organization, Edinburgh Pharmaceutical Industries Ltd (EPI)[1] which concentrated on distribution and sales. The company's specialist range of analgesics, anaesthetics, etc., continued to be made under the name of Duncan, Flockhart & Co. Ltd.

1963 EPI were absorbed into the Glaxo Group Ltd.