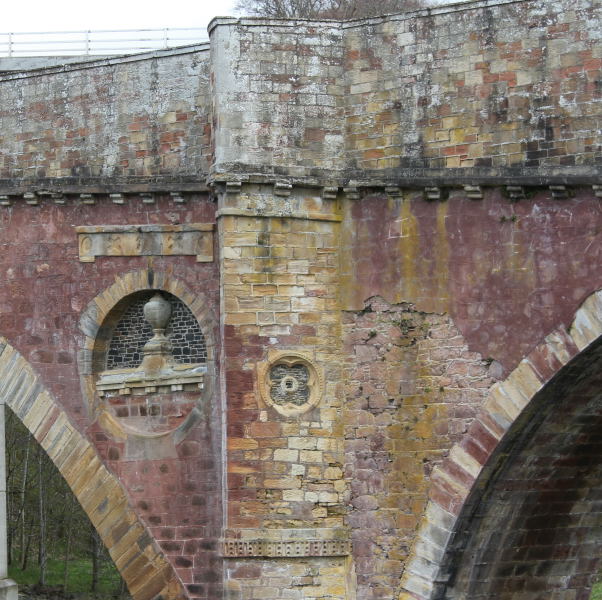 An 18th century masonry bridge over the River Tweed in the Scottish Borders.

It is no longer used as a road bridge, its role being taken over by the 1970s steel box girder/concrete bridge carrying the A68 trunk road.

It is situated 1.5 miles east of Melrose, and is close to the impressive Leaderfoot Viaduct.

Constructed as a turnpike road improvement between 1776 and 1780, and once known as ‘Fly Boat’ Bridge, referring to an earlier ferry.

The central segmental arch has a large span of 105 ft, with a rise of 34 ft. Its arch ring is only 2.5 ft thick at the crown. There two semicircular arches of 55 ft span, and a small semi-circular arch in the south abutment. Designed and constructed by Alexander Stevens. There are three longitudinal voids in each spandrel, to reduce weight. The pier foundations are of large stone blocks tied by iron cramps and laid on rock.

There are infilled circular ports in the spandrels of the central arch. There is some curious ornamentation on the spandrels and piers, and the remains of cement rendering are noticeable on some spandrels (Photo 4).

Parking is available via a junction on the A68 immediately south of the new Drygrange bridge. Although there is a layby on the B6360 close to the old bridge, this should definitely be avoided because of fast traffic on a bend and a busy junction.