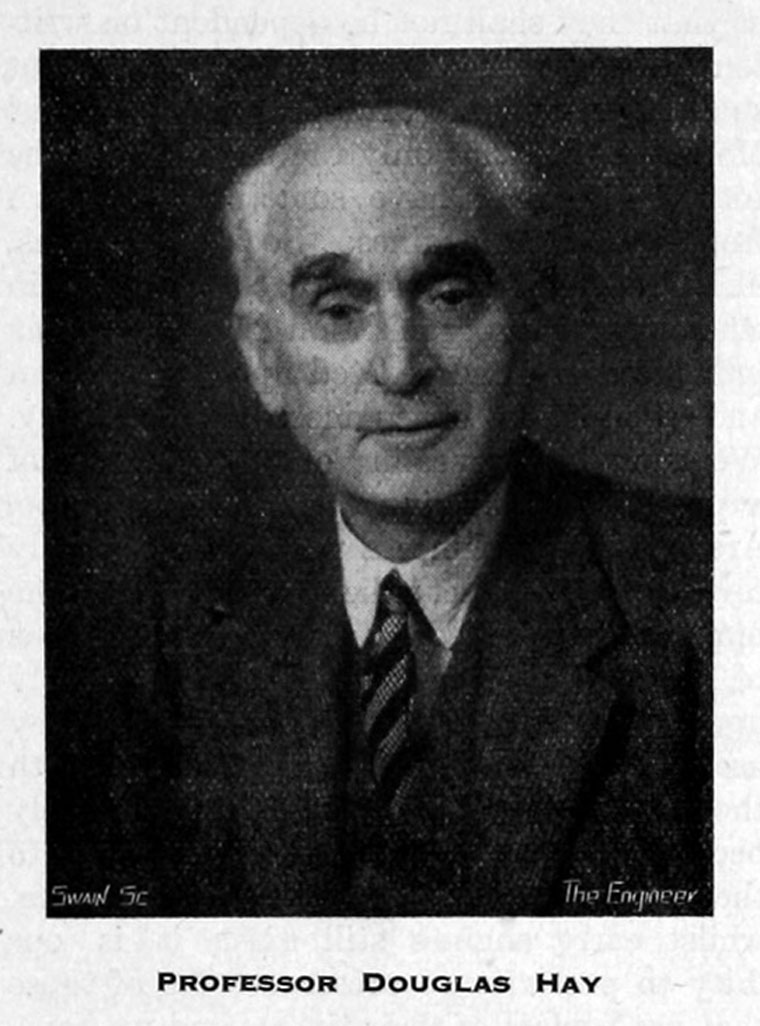 MINING engineers and mine officials throughout Great Britain will have learned with regret of the death of Professor Douglas Hay, which occurred following a long illness, at his home, "Wimbourne," Guildford Road, Woking, Surrey, on February 24th, at the comparatively early age of sixty.

Douglas Hay was the elder son of Mr. W. Hay, mining engineer, of Sheffield, and he received his early education at King Edward VI Grammar School, East Retford. He continued his technical training at the University College, Nottingham, under the late Professor William Robinson, and at the end of his course he took the London University B.Sc. Engineering Degree with honours.

In 1910 he obtained a First Class Colliery Manager's Certificate. In 1912 he was appointed H. M. Inspector of Mines in Durham. About that time he was awarded a James Forrest Medal and a Miller Prize by the Institution of Civil Engineers for his paper on "Electric Plant at Shirebrook Colliery." He remained in the Durham inspectorate until war broke out, in August, 1914, when he joined the Army and saw service in the Royal Field Artillery and later in the Royal Engineers Field Survey. He was awarded the Military Cross.

Douglas Hay resumed his work as H.M. Inspector of Mines in Durham in 1920 but was later appointed to North Staffordshire.

In 1922 he was called to Sheffield University to take up the position of Professor of Mining, a post which he continued to hold with distinction until 1925, when he again took up engineering work in the coal and allied industries, leaving the university with the title of Honorary Professor of Mining.

Throughout his career he inclined to the practical and active sides of mining rather than to purely academic work, and his gifts found scope in the positions he later occupied of general manager of Newton Chambers and Co., Ltd., of Thorncliffe, Sheffield; general manager of Thorncliffe Coal Distillation, Ltd.; managing director of Barrow Barnsley Main Collieries, Ltd., and technical director of the Wombwell Main Colliery Company, Ltd.

In 1937 he presented a paper on "The Economics of Power Production and Utilisation at Collieries," to the Institution of Civil Engineers, and was awarded a Manby Premium. He was selected as the consulting engineer for the ventilation of the Mersey Tunnel and served in that capacity from 1929 until its completion in 1937. He also served as consulting engineer for the ventilation of the Dartford Tunnel.

Among the Government committees of which he was a member we may recall the Departmental Committee on the Training and Qualification of Mine Officials, in 1929, and 1930, and the Departmental Committee on Coal Dust, of 1937. His appointment as chief engineer of the National Coal Board was announced in August, 1946, and he took it up when the National Coal Board was established in 1947.

Professor Douglas Hay will be long remembered for his wide technical knowledge and his great administrative powers, but perhaps more for that sympathetic and understanding nature which endeared him not only to his personal friends, but to the many mine officials and miners with whom he was called upon to work.