Grace's Guide is the leading source of historical information on industry and manufacturing in Britain. This web publication contains 143,455 pages of information and 230,060 images on early companies, their products and the people who designed and built them.

Various products made Douglas, on display at Kingswood Heritage Museum. The machine was used for pressing out leather shapes for boots and shoes 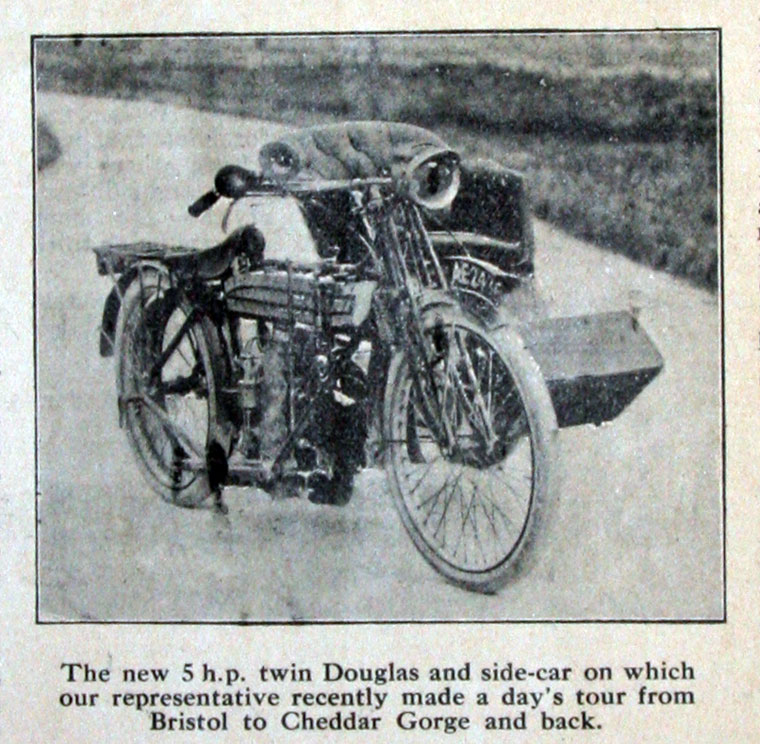 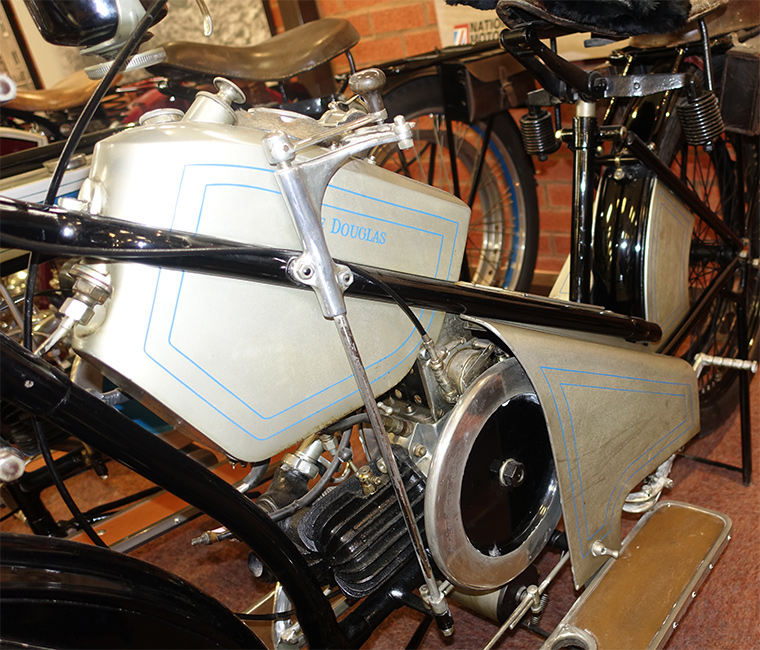 1913. Exhibit at the National Motorcycle Museum. 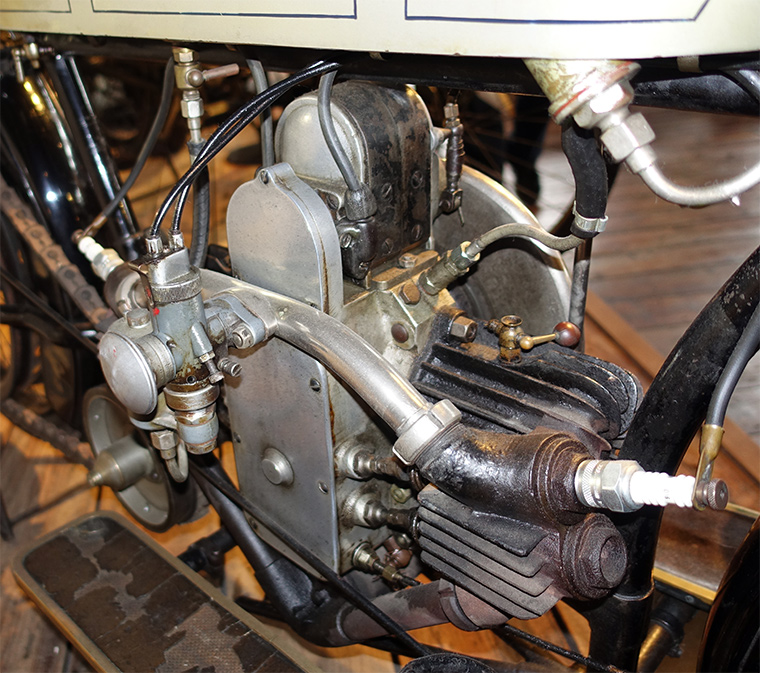 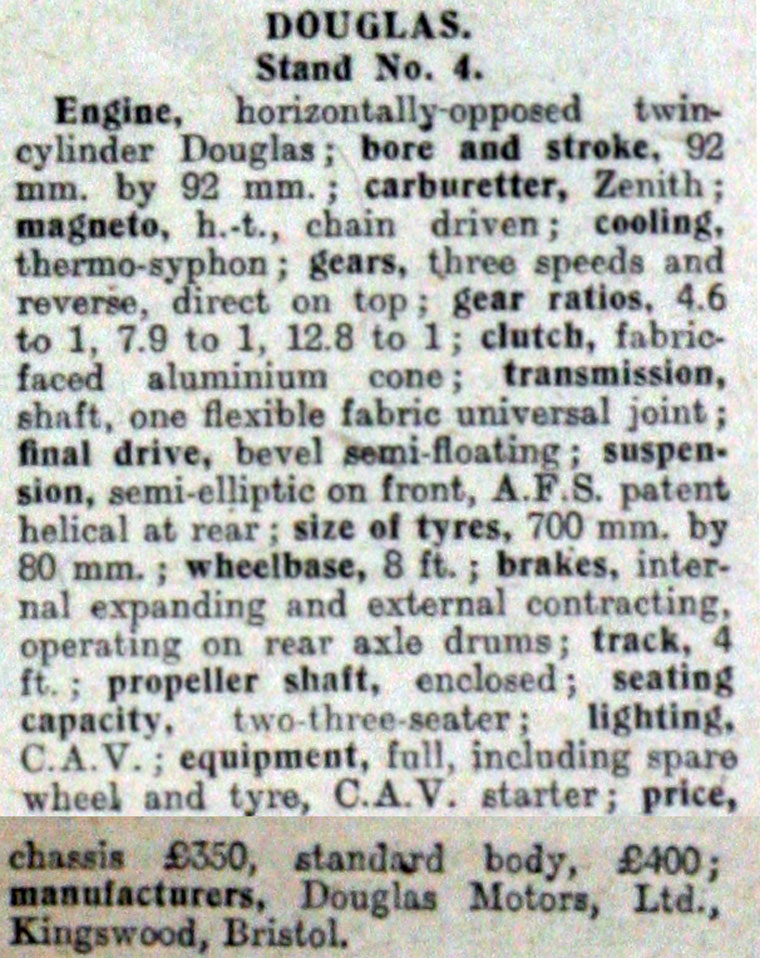 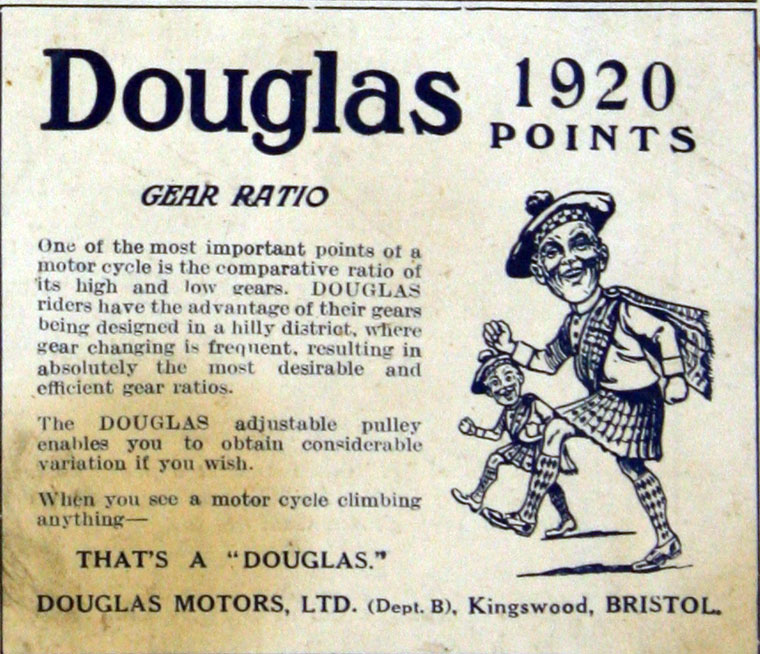 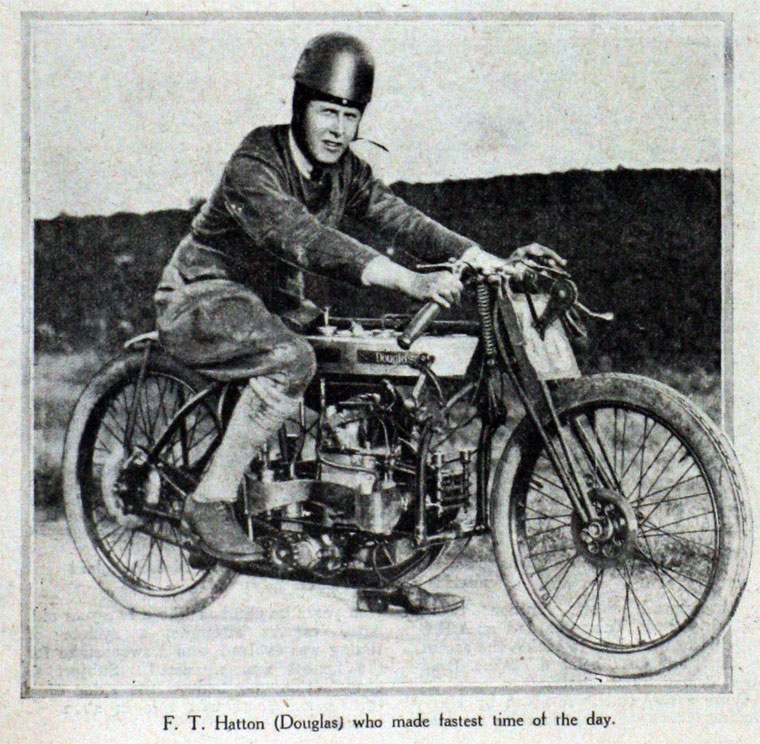 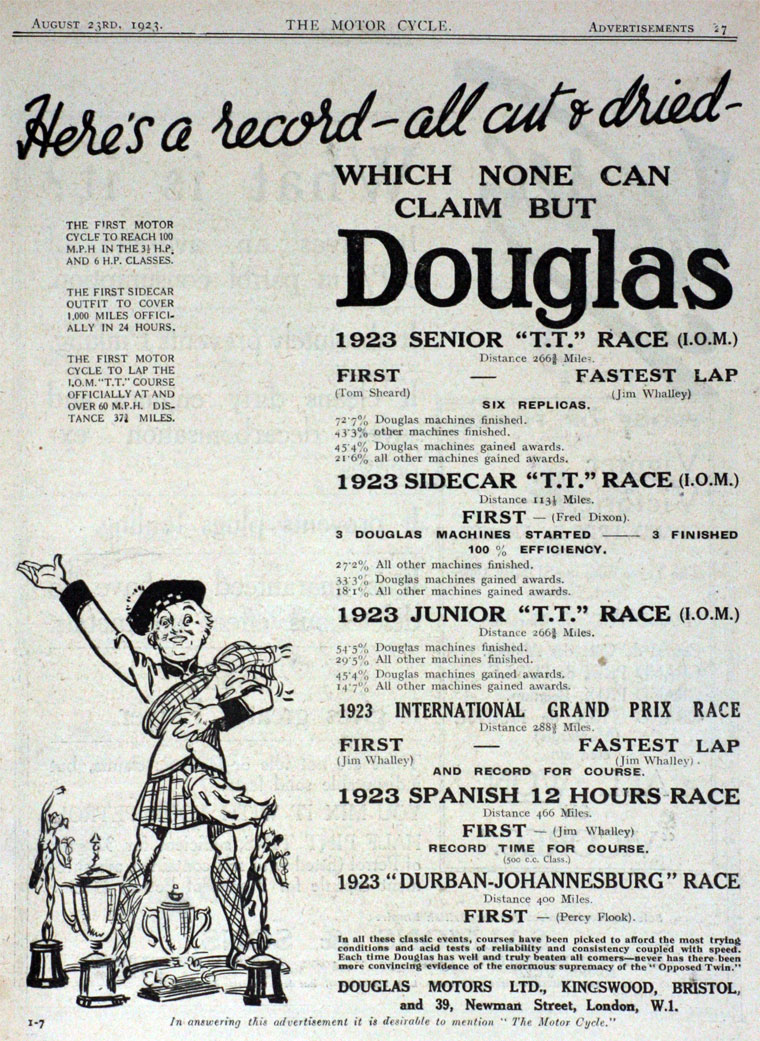 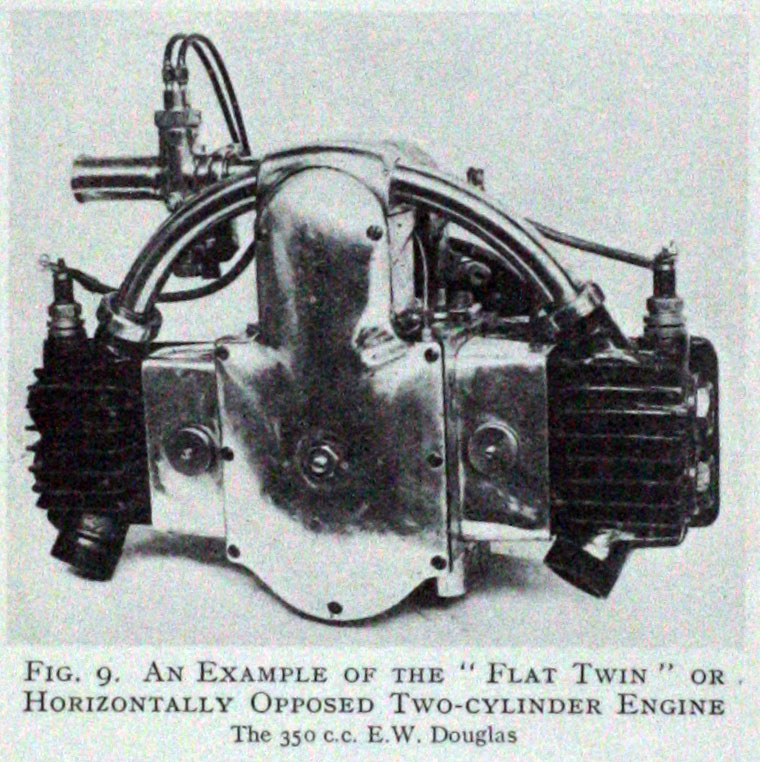 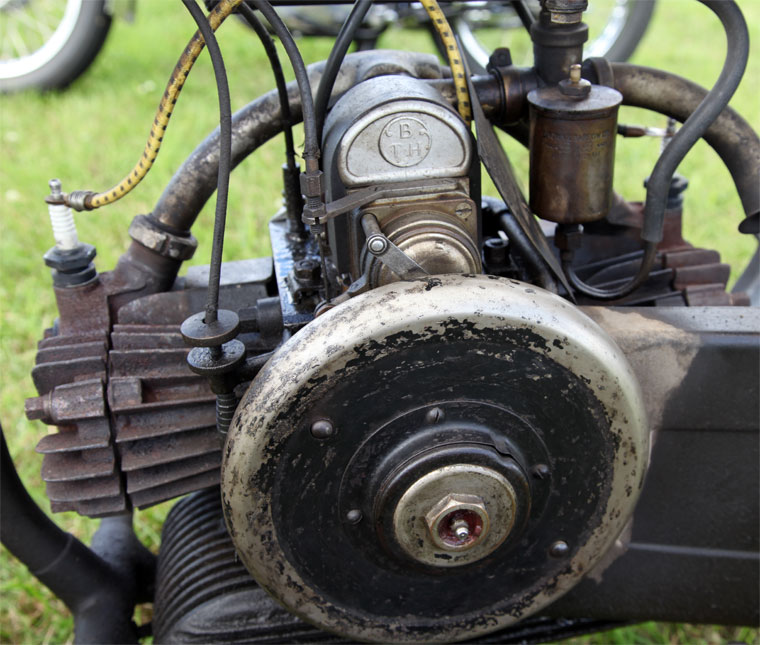 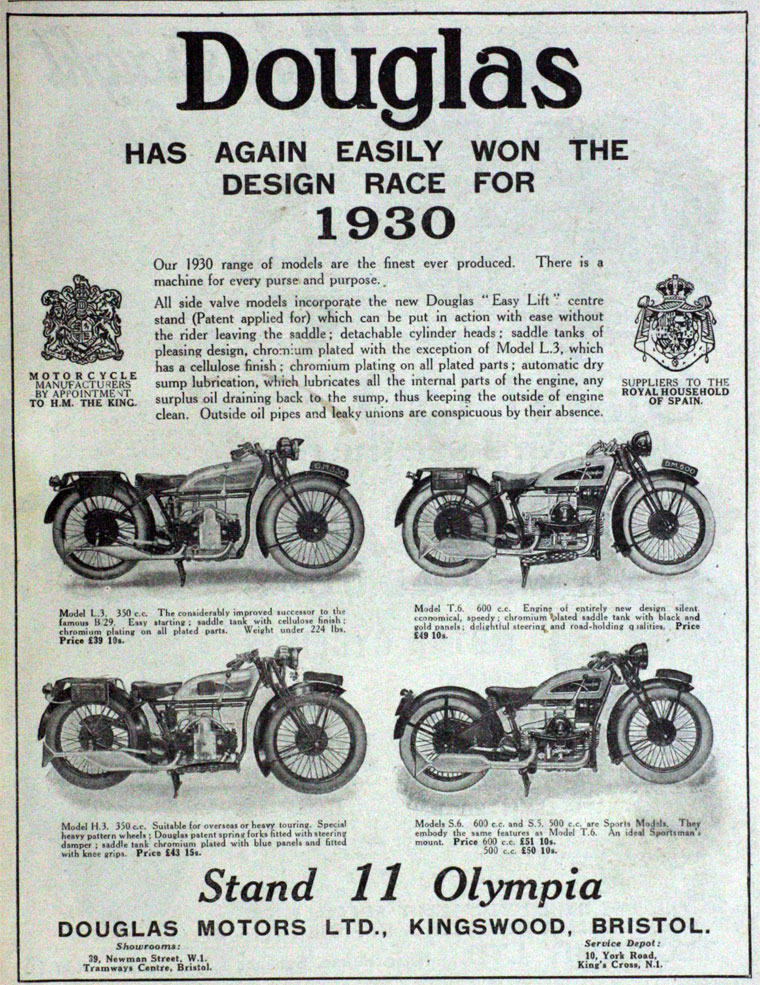 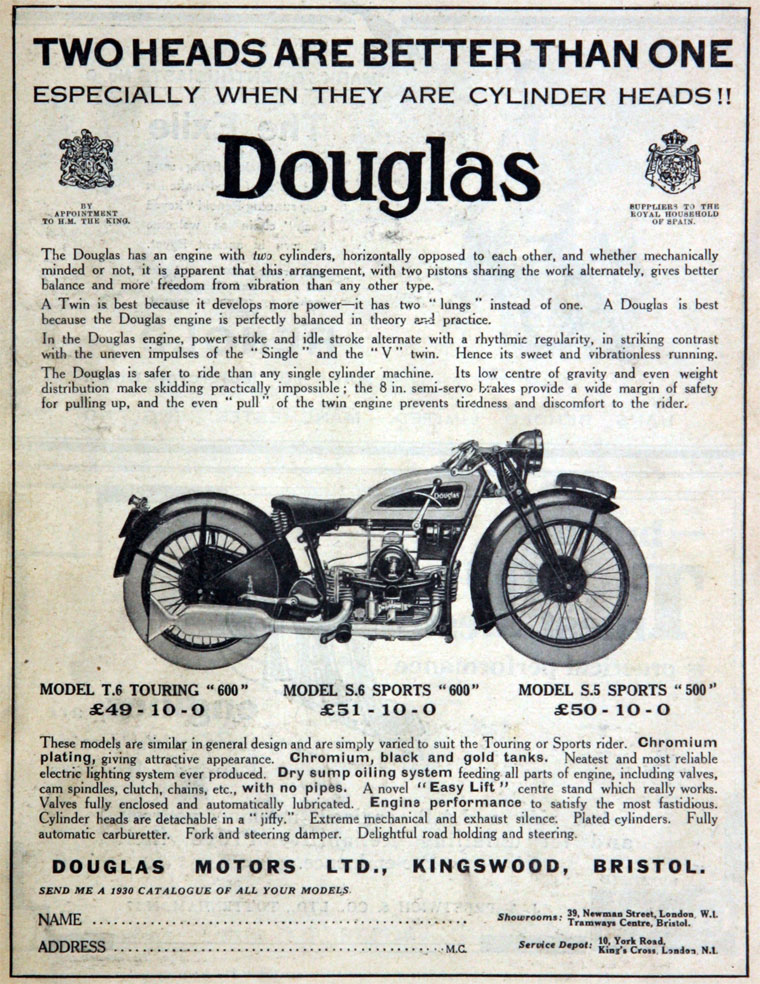 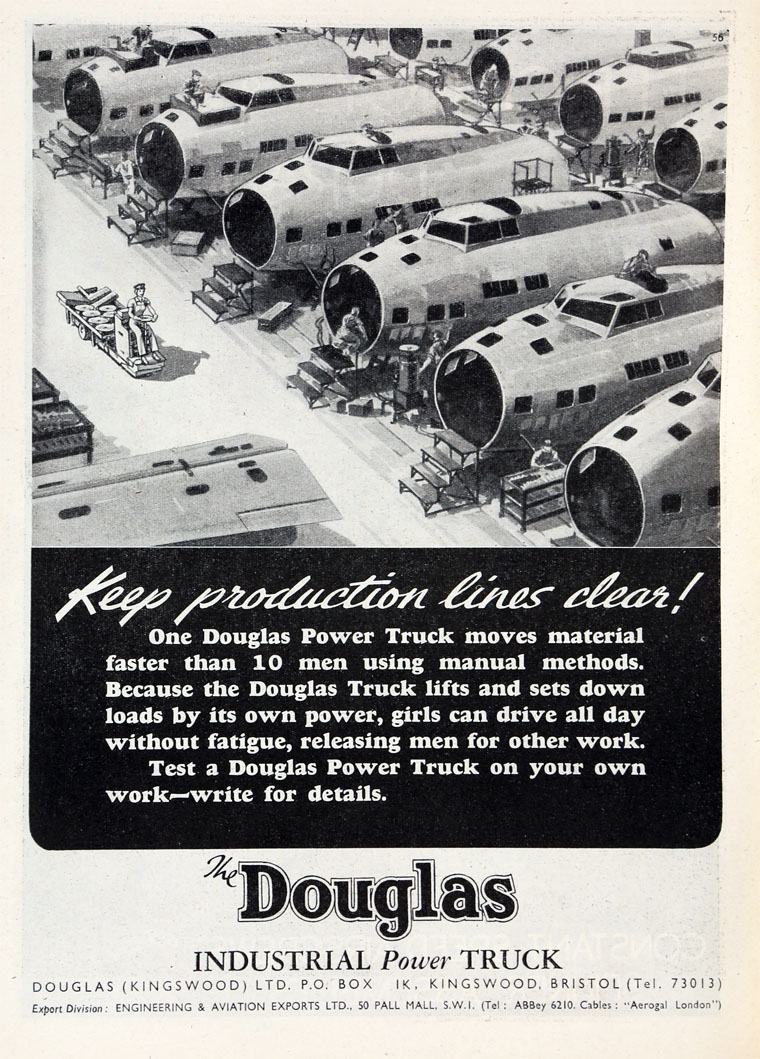 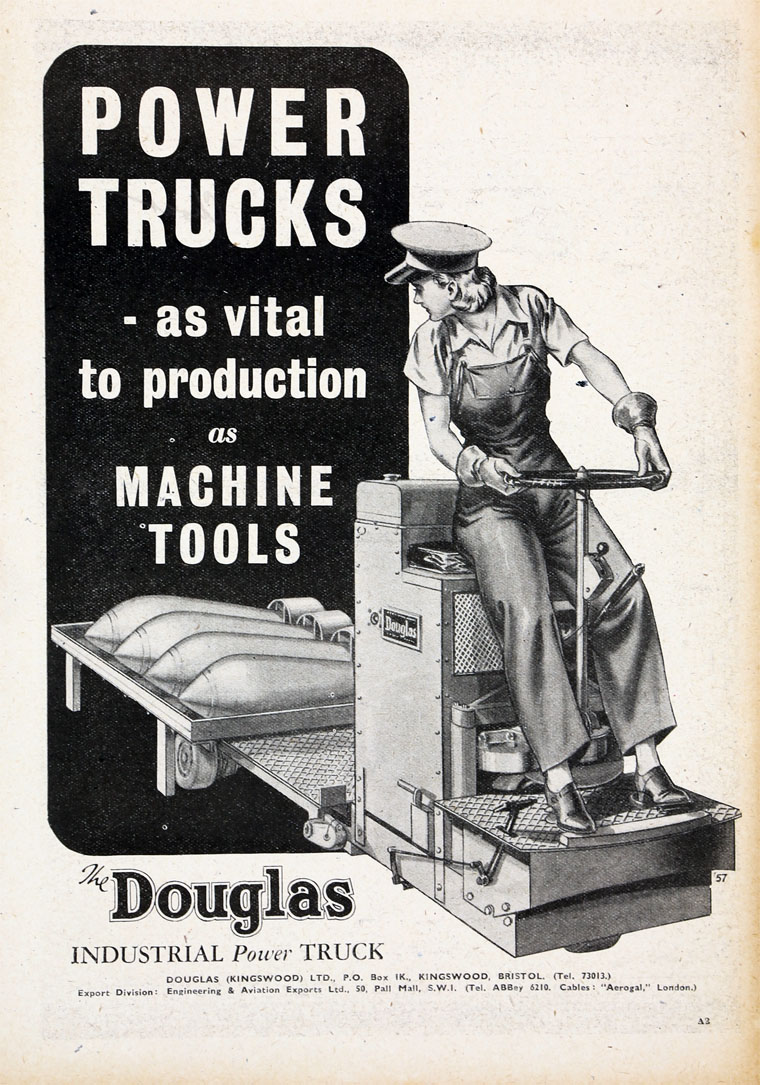 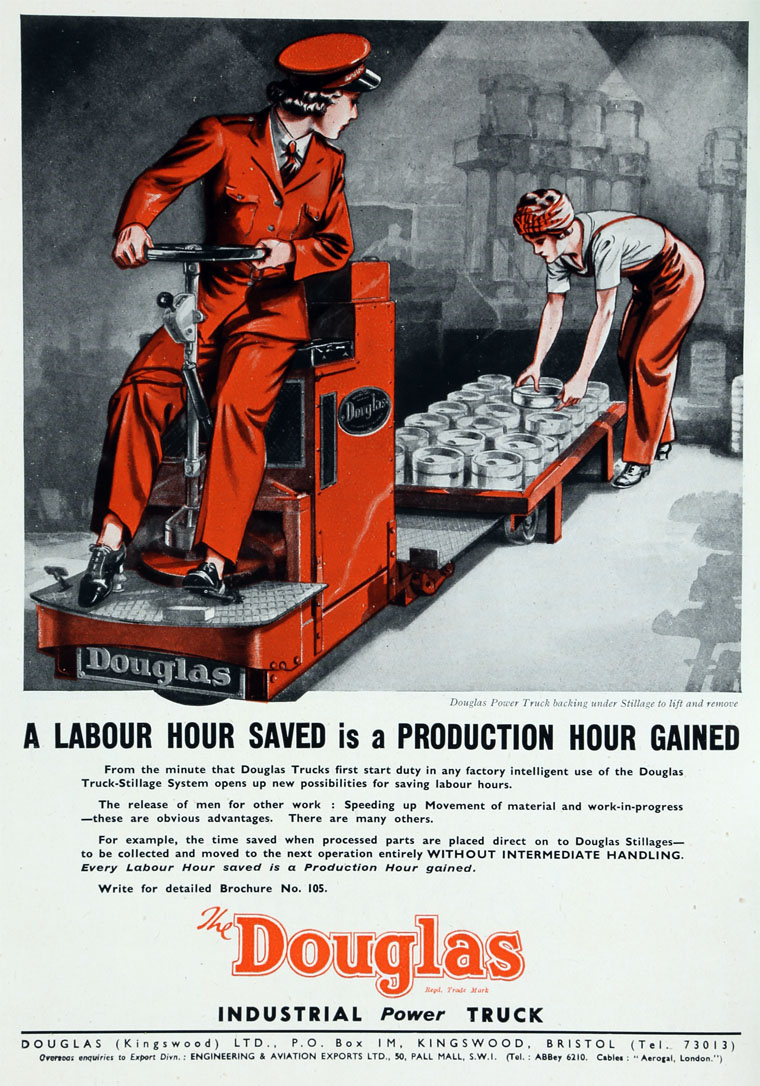 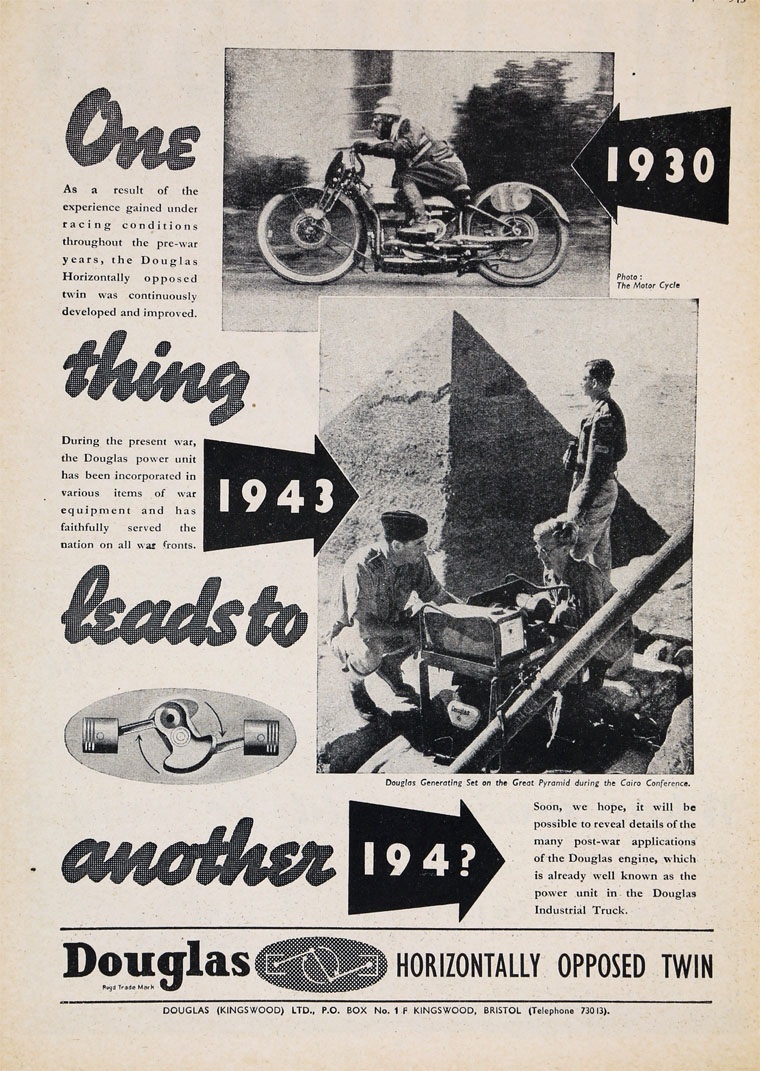 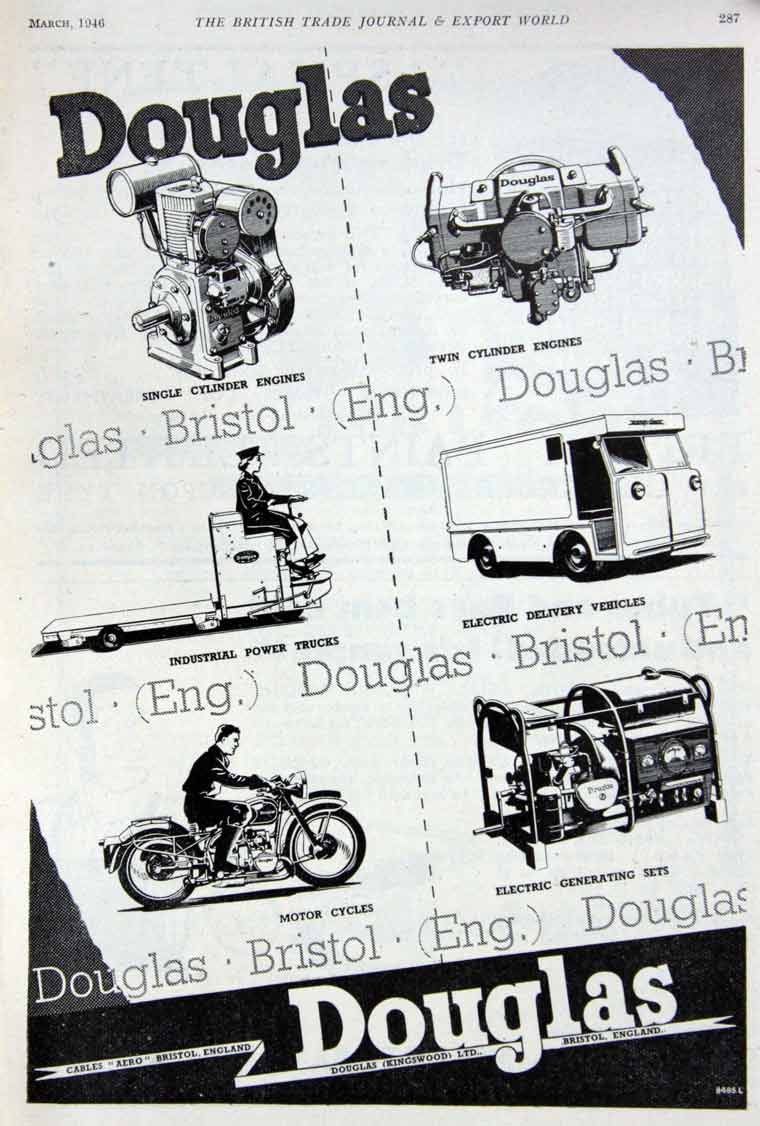 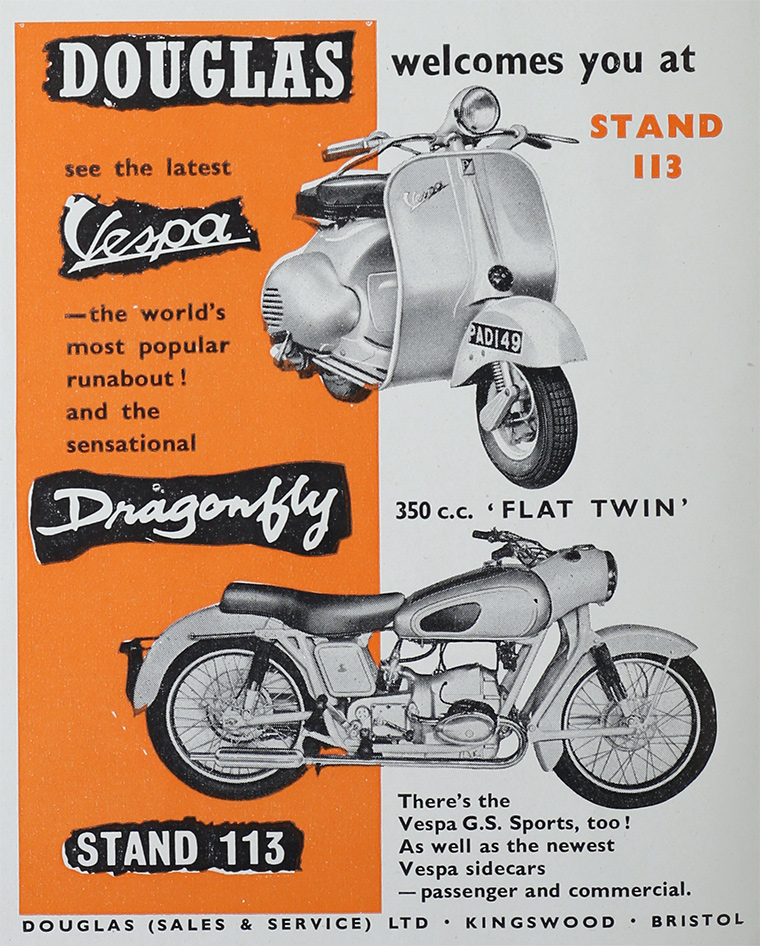 Reg No: CLT 626. Exhibit at the Dover Transport Museum. 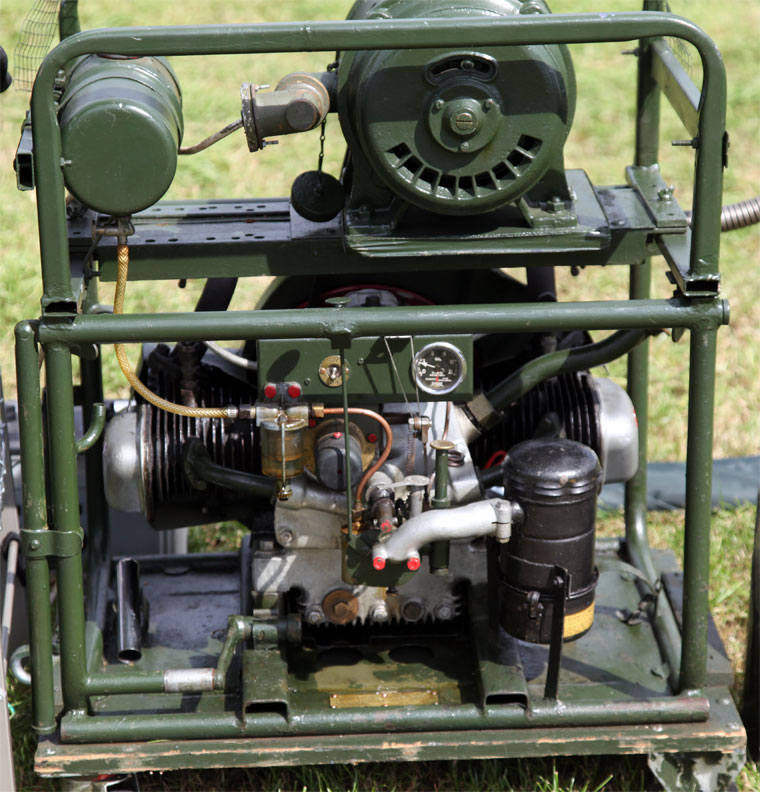 Exhibit at the Museum of East Anglian Life.

Detail. Exhibit at the Museum of East Anglian Life.

Douglas, of Douglas Road, Kingswood, Bristol, started as general engineers and ironfounders, and went on to produce motorcycles between 1907 and 1957, aero engines, industrial engines and small industrial vehicles.

1878 The firm Douglas and Williams was established.

William Douglas and his brother Edwin Douglas expanded the business as the Douglas Engineering Company. They were major suppliers to the local boot and shoe making industry. After the turn of the century and the advent of the motor vehicle they soon became involved in the development of engines.

Supplied parts to Barter, of Light Motors, for his Fairy engine

1907 Their first motor bicycle model was introduced at the Stanley Show. Mounted high in the frame, it had a 2.75hp flat-twin engine with braced forks and direct-belt drive. They also exhibited a compact V4 engine, but only two or three of these were made as the design was too advanced for the times.

1909-1912 New frame design brought changes. A two-speed gearbox became available and a ladies' model was produced. Douglas began supplying Williamson with 8hp flat-twin engines for their machines. They also had their first success at the TT, with a win in the Junior class.

WWI. Several models were used by the forces and approximately 25,000 of these reliable machines went for service use. After the end of the war surplus bikes flooded the civilian market until around 1920.

1920 The W20 model, with its 2 cylinder, 348cc sv engine, was equipped with clutch, kick starter and three-speed gear. It has a quite a few accessories, such as handlebar mounted watch, speedometer, full Lucas acetylene lighting, leather knee pads, protective shield under crankcase, holder for spare spark plugs and round leather case for spare tube or belt.

1920s During the decade, Douglas had a Royal Warrant for supplying motorcycles to Prince Albert (late King George VI) and Prince Henry. Even King George V acquired a Douglas machine in this period.

1921 The 3.5hp model was dropped and pivot-forked rear suspension made a brief appearance. This was followed by the introduction of two models with ohv engines.

1923-1925 The firm did well in the TT and proved that their motorcycles were good performers in many classes. During this period Cyril Pullin became Chief Designer for Douglas.

1926 An 'all-new model' was launched as the EW - designed to appeal to those who demanded performance without a high price tag.

1927 By now there were five versions of the EW, and although a serious fire damaged the works, Douglas saw success in Australian dirt-track racing as the low-slung design was well suited to the terrain.

1928 Cyril Pullin left the firm, to be replaced by Freddie Dixon, who produced a racing TT model. It was later joined by a dirt-track model designed specifically for speedway.

1931 The firm had become a public company Douglas Motors and was sold by the family.

1932 New models were added, but the firm was soon in financial difficulty.

1932 The light air-cooled engine had been adapted for use in light aircraft by British Aircraft Co.

1934 They produced a 494cc shaft-drive model called the Endeavour. William Douglas, by now quite elderly, bought back the faltering business and produced a smaller range until the end of the decade.

1935 Herr Kronfeld made a record flight from Croydon to Paris in an aircraft powered by a Douglas engine[2].

1935 The company was in financial trouble and was voluntarily liquidated. The factory was purchased by the British Pacific Trust[3]. It had been used for making motorcycles and light aero engines. The new owners would use it for making aero engines and accessories. A new public company Aero Engines Ltd was launched which planned to halt production of motorcycles, concentrating instead on engines for aircraft.

WWII During the war, Aero Engines made a range of products, more than half of which carried the Douglas name.

1948, Douglas was again in economic distress and forced to rationalize its line to a series based on a 350cc flat twin.

1951 A 500cc prototype was shown but never made. An agreement was made for the company to build the Italian Vespa scooter under licence.

1955 The last model made was the advanced and novel 350cc Dragonfly. Distinctive looks and good handling could not hide the low top speed (75mph, although a sports model claimed 84mph) and poor low-rev performance.

1956 The firm was taken over by Westinghouse Brake and Signal Co.

1957 The Vespa was still imported, but the end of the Douglas model was close.

1958 Made a loss due to poor sales of the scooter.

Note: For many years afterwards, still trading under the Douglas name, the company imported Gilera mopeds and lightweight motorcycles.