Grace's Guide is the leading source of historical information on industry and manufacturing in Britain. This web publication contains 143,014 pages of information and 229,287 images on early companies, their products and the people who designed and built them. 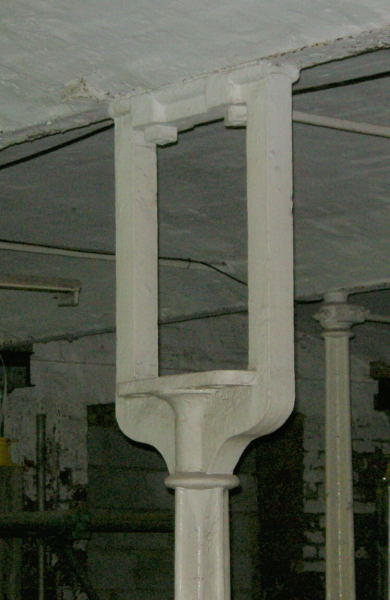 Ditherington Flax Mill, located in Ditherington, a suburb of Shrewsbury, is the oldest iron framed building in the world.

The mill's architect was Charles Bage, who used an iron-framed structure, inspired by the work of William Strutt.

1797 ' A very important improvement has just been made in the building of manufactories liable to danger from fire, by Messrs. Benyon and Bage, of Shrewsbury. These gentlemen have just finished a spacious flax-spinning mill, which is fire-proof. The materials consist wholly of brick and iron ; the floors being arched, and the beams and pillars being formed of cast iron.' [1]

The mill was built for John Marshall of Leeds, Thomas Benyon, and Benjamin Benyon. The architect, Bage, was also a partner in the venture. This partnership was dissolved in 1804, the mill being retained by John Marshall, who paid off his partners on the basis that it was worth £64,000. The other partners built themselves another mill nearby. These two flax mills provided the 'chief manufacture' of Shrewsbury (according to an 1851 directory).

The mill closed in 1886, and was sold (with a bleach yard at Hanwood) for a mere £3,000. The building was then converted to a maltings (hence its more commonly-used local name), and as a consequence many windows were bricked up.

Its design effectively overcame much of the risk of fire damage from flammable atmosphere, due to the air containing many fibres, by using a combination of cast iron columns and cast iron beams instead of wood.

1897 Mill sold to William Jones Maltsters. They went bankrupt in 1934. Ansells resumed malting in 1948, and ceased in 1987, after which the site remained vacant.

2005 Site acquired by English Heritage, and conservation is under way.

A Building assessment of Ditherington Flax Mill, by English Heritage and Shropshire Industrial Enterprises Ltd in 1988 reported that the Warehouse was completed by June 1805. In 1810 'it was linked to the cross mill by a chain bridge, erected according to the patent of a Mr Palmer by a Mr William Hazledine'. The bridge would provide a fire escape from the cross building, and also provide access for firefighters. [2]. The source also describes the warehouse designed by Charles Bage, constructed in two major phases of 1796-7 and after a fire in 1809, whose top storey was linked to the upper floor of the Cross Building by a chain suspension bridge (removed) whose access doorway, though blocked off, is still visible.