6-stroke gas engine made to the patent of S. Griffin and Co on display at the Museum of Bath at Work 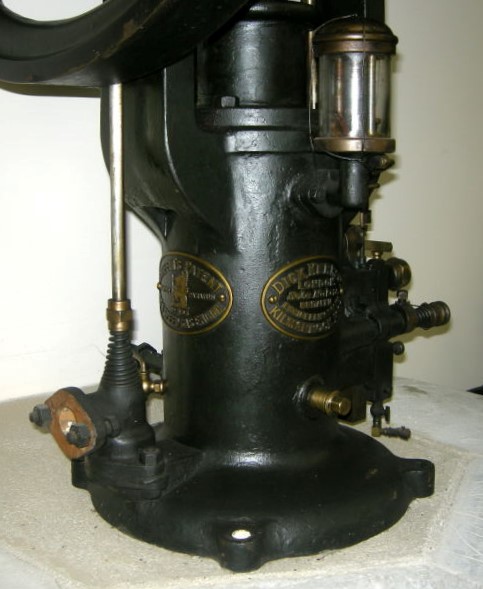 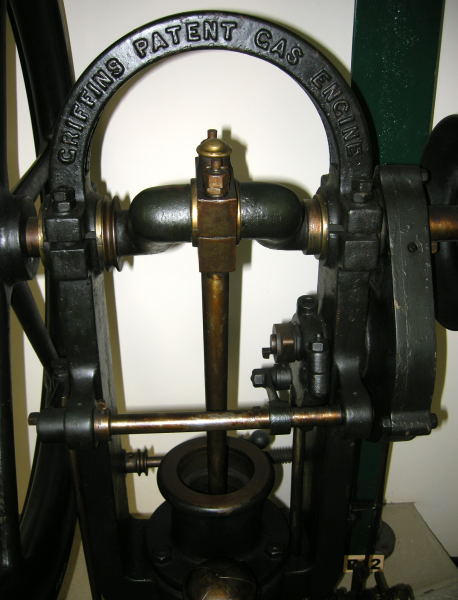 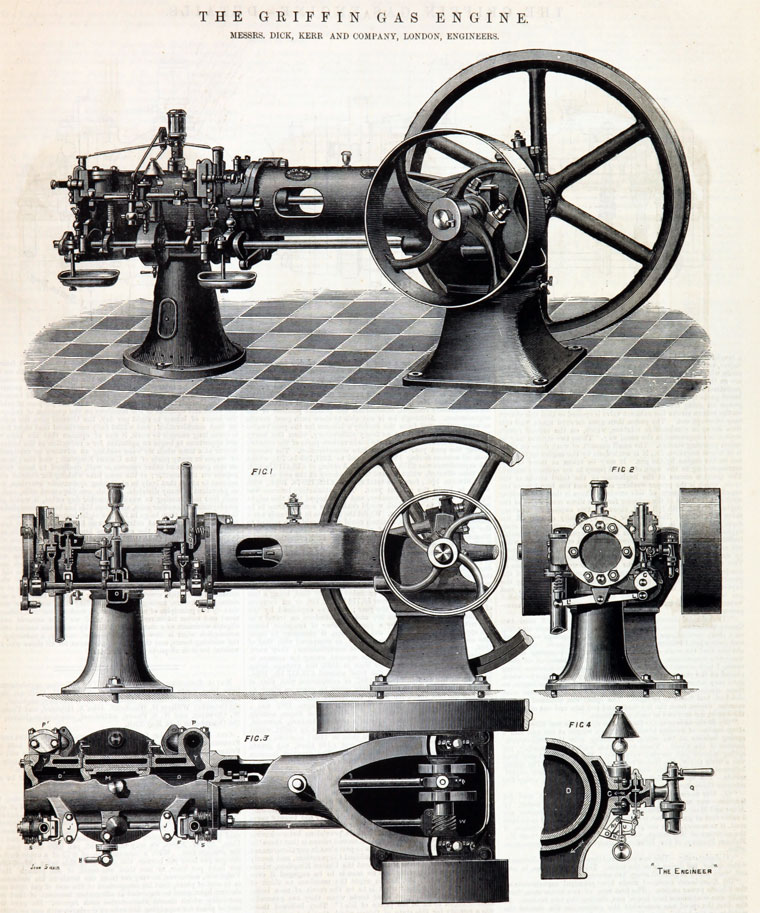 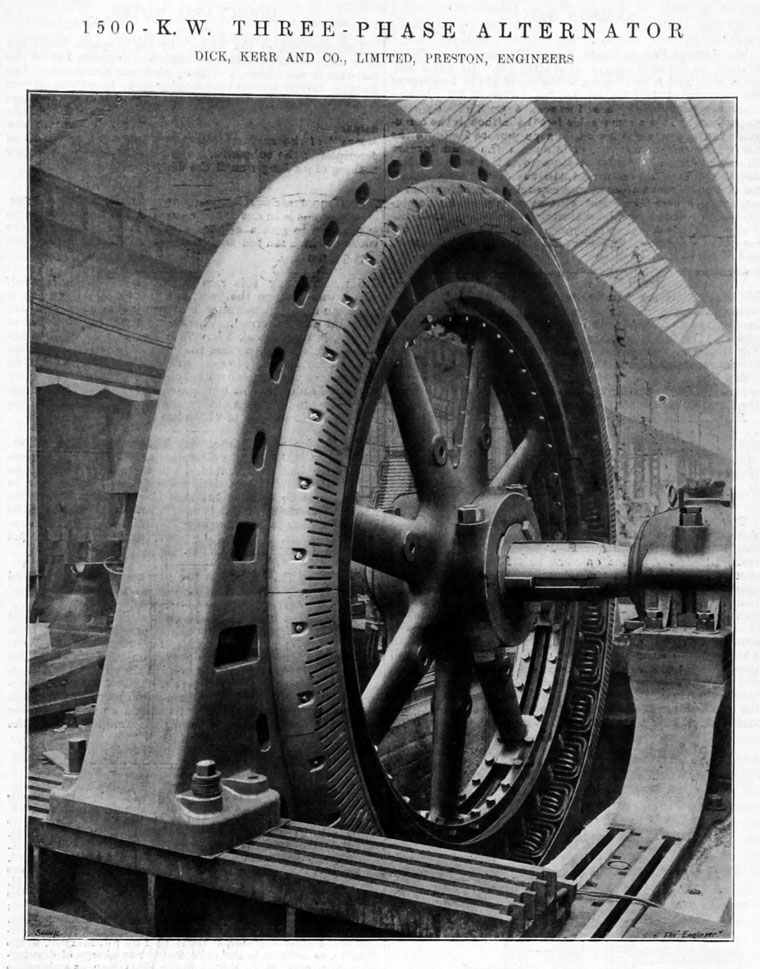 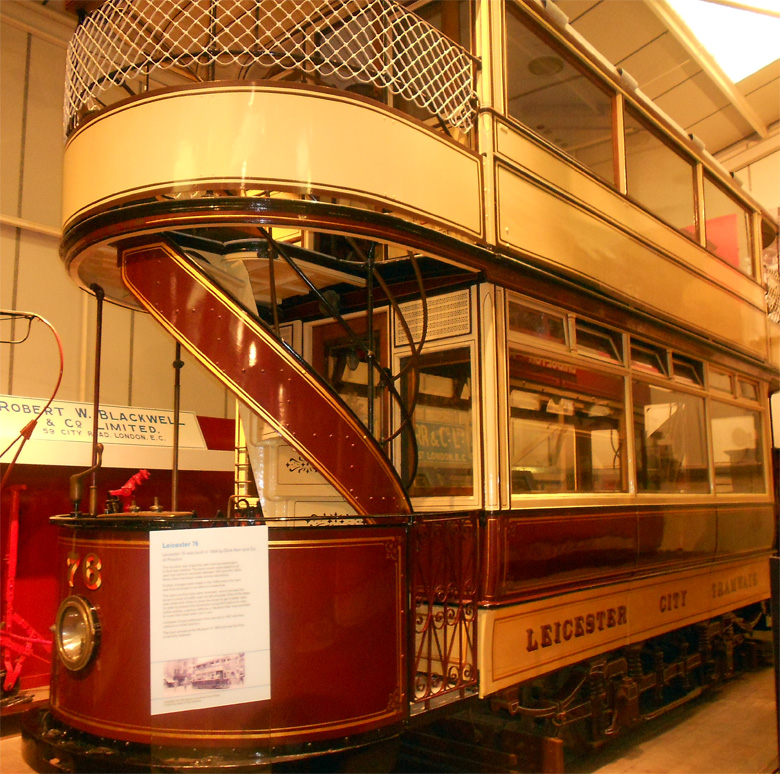 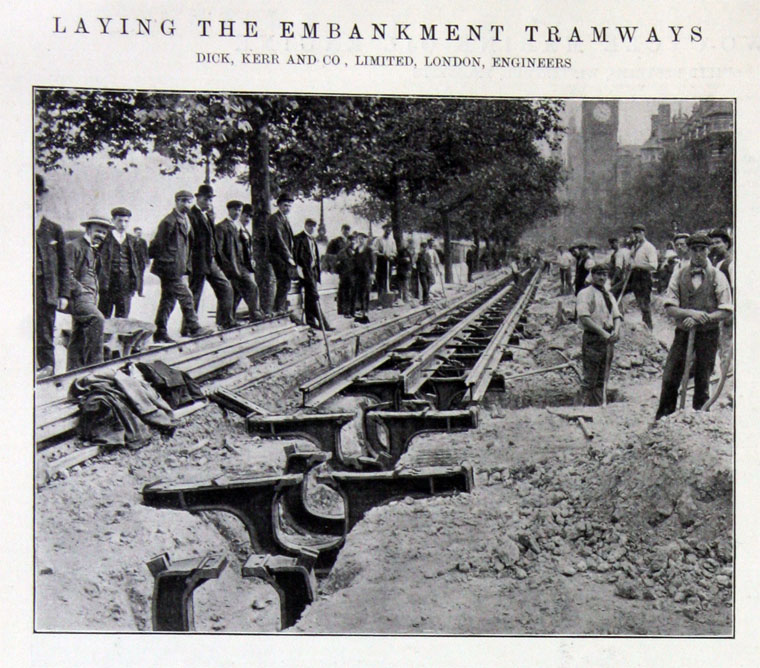 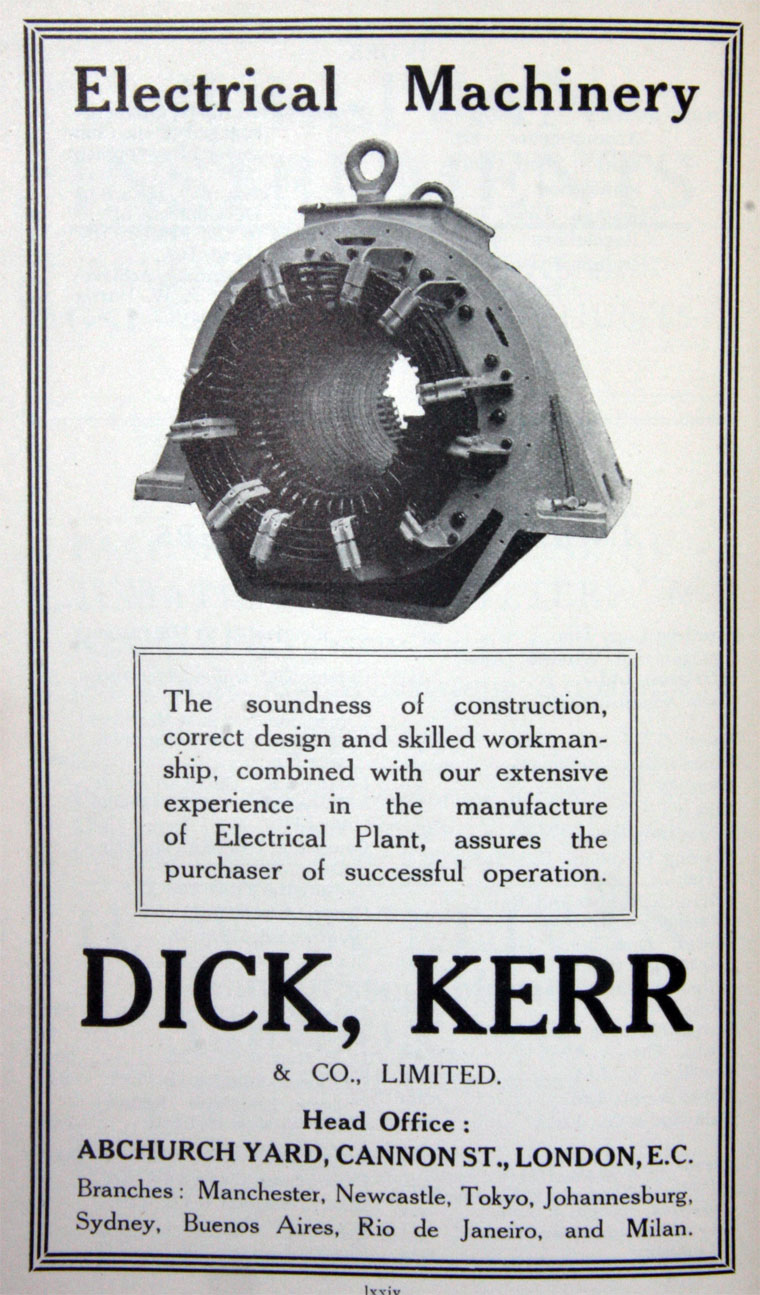 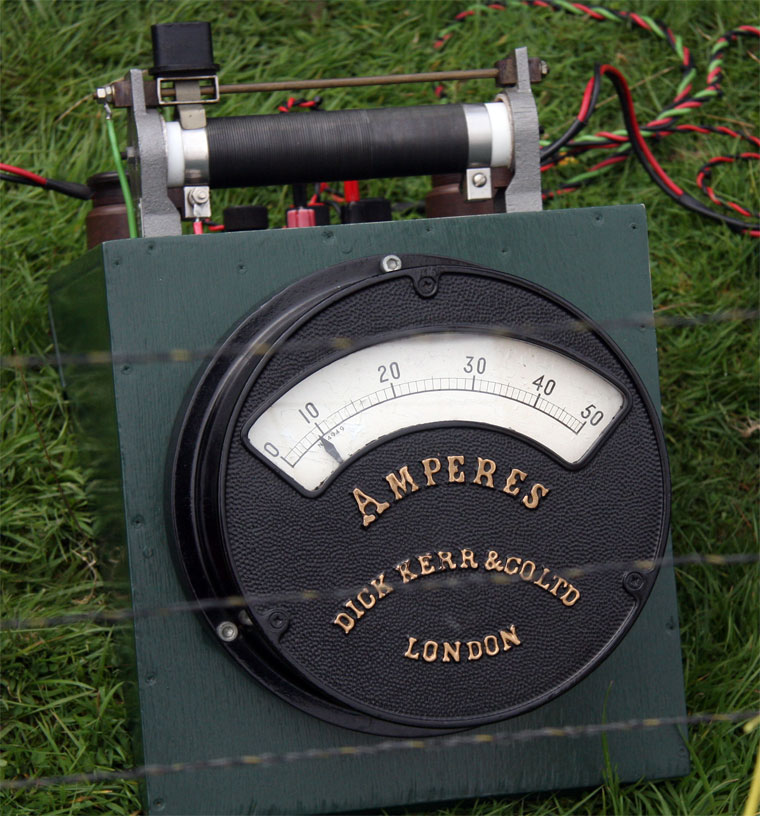 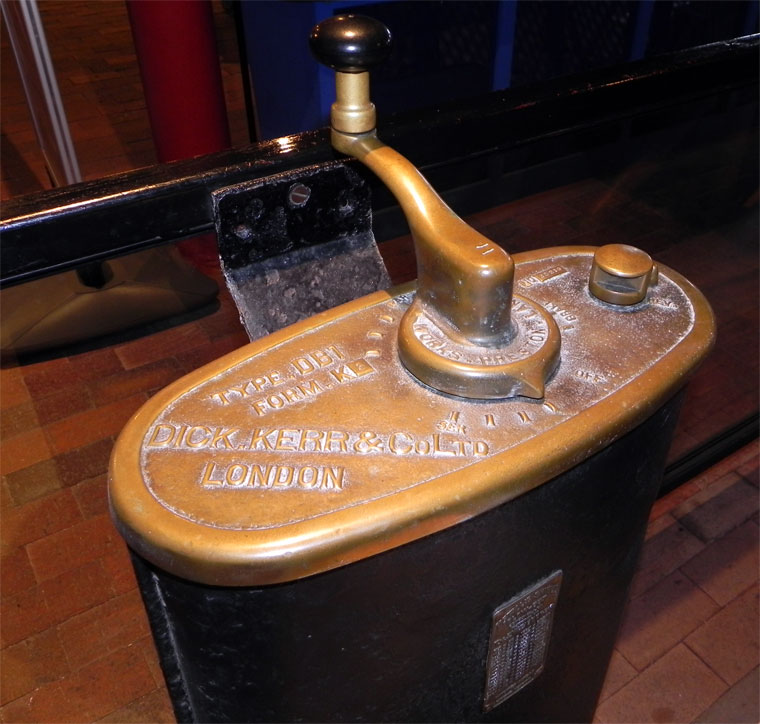 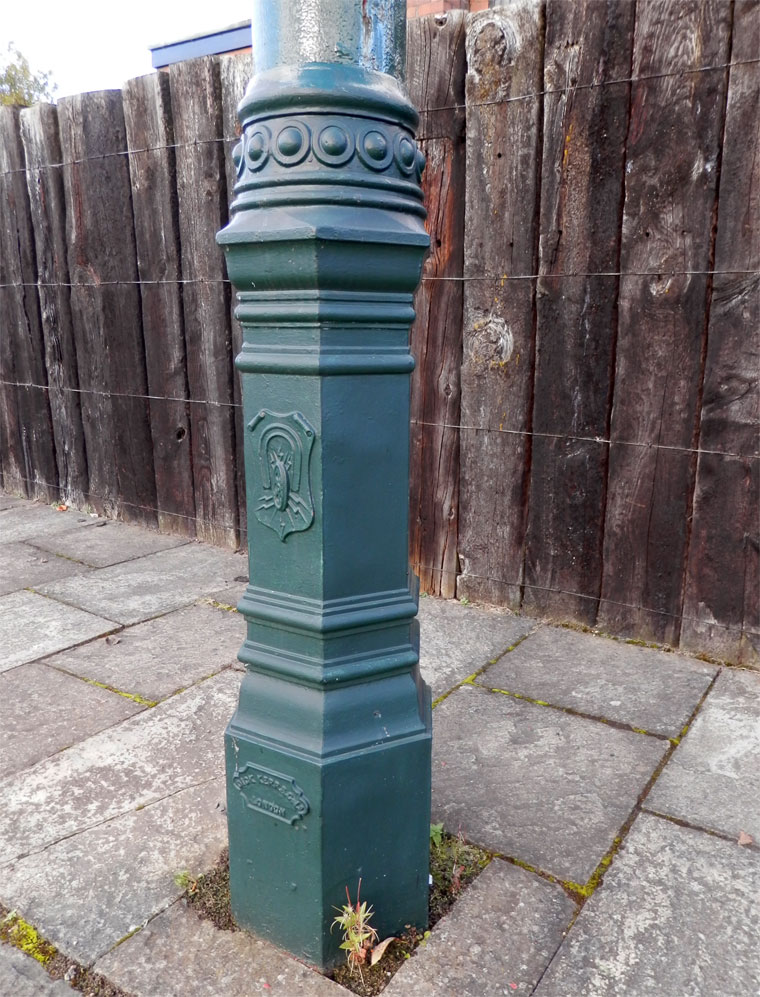 Lamp Post. Exhibit at the Summerlee Museum of Industrial Life.

Dick, Kerr and Company of Kilmarnock, Scotland with head office at Leadenhall St, London (1885); later at Preston, England, was a locomotive manufacturer and manufacturer of electrical equipment. Previously part of W. B. Dick and Co, the company also built all kinds of tramway equipment and rolling stock.

1883 The company was formed by spinning out the rail and tramway activities from W. B. Dick and Co with John Kerr and was given the name of Dick, Kerr and Co; the company built around fifty locomotives up to 1919.

1888 Produced 'Griffin' 6-stroke gas engines, designed by Samuel Griffin. Description and illustration in The Engineer. [3]. Some of the engines were double-acting, i.e. combustion at each end of the cylinder, alternately, after 3 revolutions of the flywheel[4]. Single-acting twin cylinder engines and single cylinder verticals were also produced.

1890 Showed four sizes of the 'Griffin' gas engine at the Engineers, Electricians, Builders and Ironmongers Exhibition. [6]

1890 Incorporated as limited company, as railway and tramway appliance makers and as iron and steel founders and electricians[7]. Public offer of shares to acquire the engineering and contracting company of the same name - reasons given were the advancing years of the senior partner and the need for investment to expand the works at Kilmarnock including a modern iron and steel foundry[8].

1890 Dissolution of the Partnership between Frederick Manuelle and John Kerr, carrying on business as Engineers and Contractors, at 101, Leadenhall-street, London, and Kilmarnock, under the style or firm of Dick, Kerr, and Co[9]

1893 The company acquired the railway and tramway plant activities of Hartley, Arnoux and Fanning, which company had recently been purchased by Kerr, Stuart and Co.

1895 'A BIG GAS ENGINE.
On Thursday afternoon, in connection with Swan Field Shed Company, Limited, Colne, a gas engine was christened in the presence of numerous ladies and gentlemen. The gas engine has been erected by Messrs. Dick, Kerr, and Company, of Kilmarnock, and Mr. J. W. Hartley, manager of that company, stated that the engine had been built at a cost of about £1,700, and it had a maximum of 280 horse-power. The fuel to be used would be coke, it being expected that the engine would consume about 1.5 pounds of coke per indicated horse power per hour. This was lower than any steam engine was at the present time, and in a short time he thought it would be still further reduced. He said this engine was the largest single cylinder gas engine in this country, and he believed until within tho last few months it might be said to be the largest in the world.'[12]

1899 The company was registered on 24 August, and is a reconstruction of a company of the same name, to take over a business of engineers and contractors.

1899 The English Electric Manufacturing Co was incorporated as a public company, for purpose of manufacturing, at its own new works at Preston, every variety of electrical machinery, particularly for use by railways and tramways[13].

1900 June. Tramways and Light Railways Exhibition at Islington in conjunction with the English Electric Manufacturing Co and the Electric Railway and Tramway Carriage Works [14]

1902 Joint exhibit by Dick, Kerr and Co, the English Electrical Manufacturing Company, and the Electric Railway and Tramway Carriage Works, Limited at the International Tramways and Light Railway Exhibition[15]

1902 The bulk of the capital of the English Electric Manufacturing Co was acquired[16], and the capital of that company largely increased, which gave Dick, Kerr and Co a factory at Preston.

1904 Contractors for the Lancashire and Yorkshire Railway's electrification of the Liverpool and Southport Railway using direct current (dc) electricity [17].

1910 Decided to begin construction of steam turbines under the Bergmann patents [18].

1911 Construction of a lamp factory at Preston, to make metal filament lamps.

1914 Listed as electrical and mechanical engineers and contractors. [19]

WWI During the First World War the company converted a factory to munitions work. The company also made aircraft, to designs from the Seaplane Experimental Station at Felixstowe and acquired the A. E. G. Electric Co, one of 3 subsidiaries in the U.K. of the German company A. E. G.

1916 Acquired Willans and Robinson; full control achieved in 1917 when plans were made for consolidation of the 2 businesses.

1919 The Dick, Kerr and United Electric Car Works at Preston and Willans and Robinson at Rugby were acquired by the English Electric Co.

1919 English Electric Co arranged the amalgamation of the contracts department of Dick, Kerr and Co with that of J. G. White and Co in the form of the Consolidated Construction Co, which eliminated one of the main competitors in the field[22]

1922 Manufacturer of rail and tramway appliances.