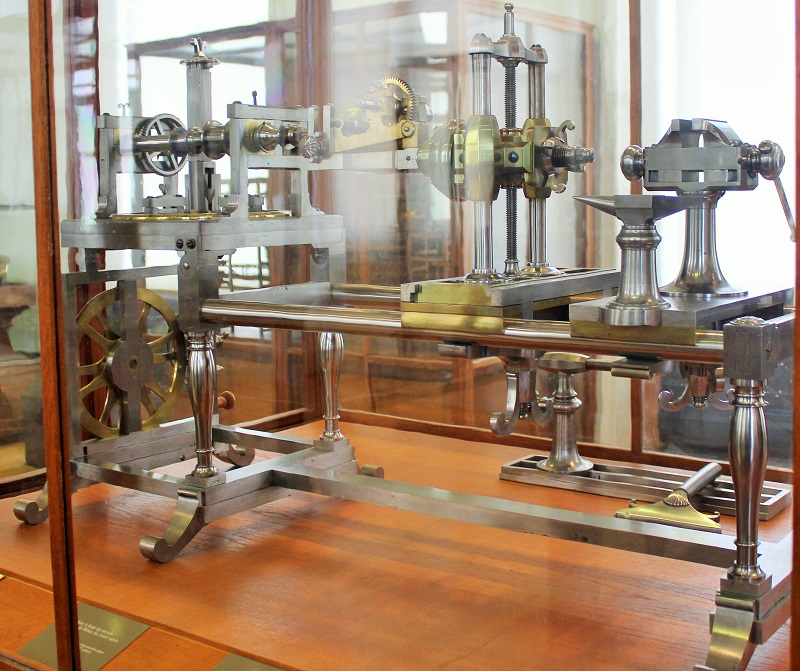 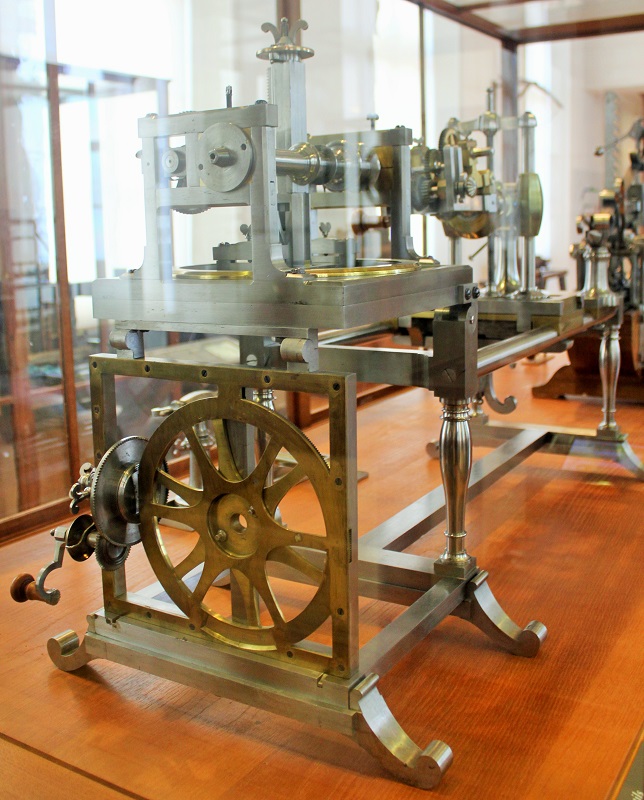 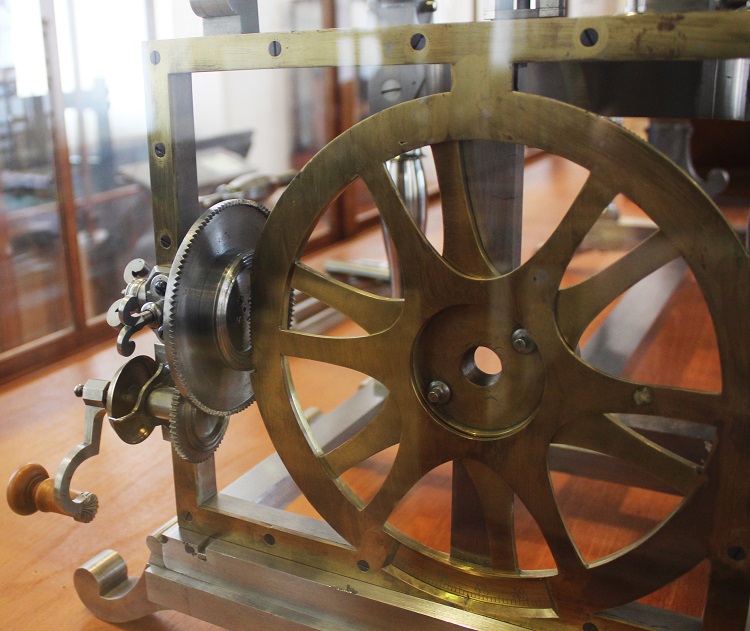 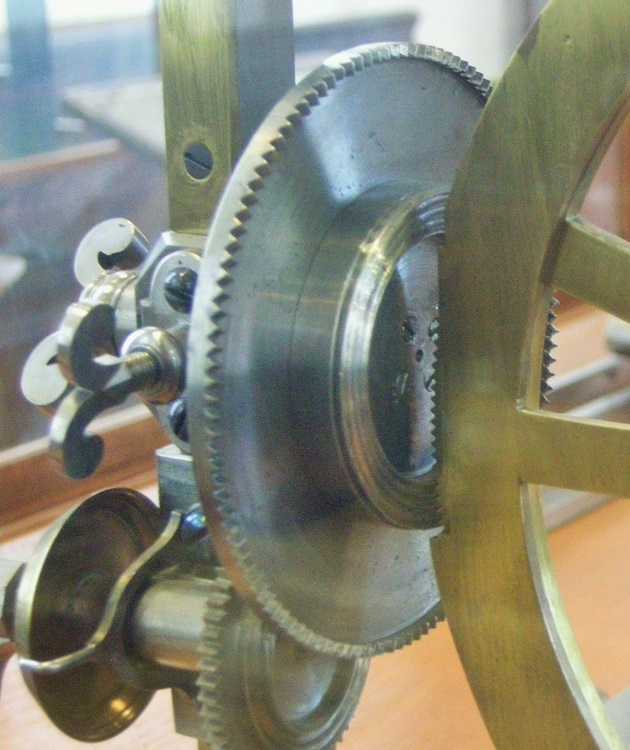 13. The smaller lathe. Postcard, from 'Circuitous Root' website (see above)

A booklet published in 1983 refers to two lathes: a lathe, Inv. No. 15, constructed in the workshops of Vaucanson on the principle of the lathe of Desbordes (conserved under inventory number 1101), and an iron lathe with a small vice and anvil mounted on a sliding carriage, Inv. 1101.

The machine on display is stamped with the number 1101. The museum's website shows three photographs of a similar lathe under inventory number 15 (00015). It is described as a copy, and the designer (Auteur intellectuel) is identified as Desbordes, a Mécanicien, and the maker as Jacques de Vaucanson, and that it entered the museum in 1783. See here and here.

A photograph published as a postcard about 100 years ago clearly shows the non-displayed machine, includes the inventory number 15, and states that it was built in the workshops of Vaucanson before 1783. The postcard image is available at high resolution online here [1], and reproduced here at reduced resolution as photo 13.

The museum's online catalogue of exhibits shows the brief details of the displayed lathe (Inv. No. 01101) here, and gives the date of acquisition as 1775-1825.

A catalogue of the collection dated 1818 refers to two machines: (a) an iron lathe by M. Desbordes, with a small vice and anvil mounted on a sliding carriage, a porte-fraise (milling spindle) and an iron support, and a means of dividing and cutting wheels (gear wheels, no doubt); a lathe on the principle of the above, constructed in the workshop of Vaucanson.[2]

The displayed machine is larger than the other (the length is given as 103 cm, compared with 60 cm), raising the question of whether the smaller machine is a model, or simply a smaller version.

The detail design and workmanship of the displayed machine are consistent with the input of Felix Rosat, who was responsible for the production of the Vaucanson's Lathe and Vaucanson's Drilling Machine, which are also on display in the museum. All three of these machines show distinctive 'architectural' features, particularly the use of barrelled octagonal bosses. These can also be seen in photos of the smaller Desbordes machine, suggesting that both of the Desbordes machines came from the Vaucanson workshops.

It is a weird and wonderful machine. Wonderful in the quality of the workmanship, weird in its concept, in the complexity of its construction, in the provision of a vice and anvil on the frame of a precision machine tool, and in the extravagant use of craftsman's time and effort for a machine of such apparently limited utility. It was presumably not made for industrial use, but for a wealthy private owner: an ornamental turning lathe.

Aspects of the machine's design are puzzling, and any clarification would be welcome.

The following observations will mainly relate to the displayed machine.

As displayed, the carriage, which can be slid along the round-bar guides after releasing a large wing nut, is equipped with an elevating head which accommodates a hand-cranked milling cutter. This would be used to machine a workpiece attached to the lathe spindle. The complete milling assembly with its cross-slide can be removed from the carriage and replaced by another cross-slide, seen alongside the machine. This has a pedestal which can hold the tool rest for the hand-held tool, but it is displayed holding something resembling a tailstock. This might indeed be a tailstock, but if so, where would the tool rest then go?

The smaller machine is equipped with a three-jaw chuck, and a different type of device is attached to the carriage.

It appears that the headstock can be rotated about its vertical axis.

Photo 6 shows a pair of spoked brass wheels. The outer portion is fixed, while the inner one, graduated in degrees, is rotated by a hand crank provided with a micrometer dial, for indexing purposes. It has a most unusual worm and wheel type of arrangement with the 'worm' actually being a scroll (photo 8). The purpose of the larger diameter bevel-type gear is not known. The frame carrying this assembly is hinged at the top so that it can be swing up to engage with the lathe spindle and drive it through the two pins shown in photo 7. However, it appears that when this is done, the headstock frame will no longer be supported at the back. The frame is hinged at the front (photo 5), and it is not clear how it would now be supported.

Another puzzle concerns the headstock's vertical column. Its rack engages with a pinion on the layshaft, and is engaged and disengaged using two 'typewriter'-type keys seen in photo 4, which move the layshaft bearings horizontally in their frame. The function of the column is unclear. Photo 13 shows the bottom of the column to be connected to the toolholder by some sort of strap.