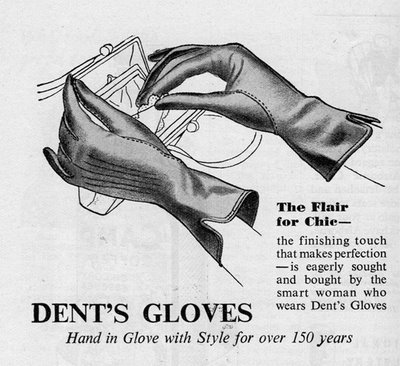 of Worcester, Warminster and Torrington

In 1801 Jeremiah Macklin Allcroft was apprenticed to John Dent.

By 1822 Allcroft had become a partner in the firm.

1853 A factory was built at Warmstry House, in Worcester, used for leather glove production.

1855 The business became known as Dent, Allcroft and Co. By this time Jeremiah and the Dent brothers had retired, and John Derby Allcroft, Jeremiah's son by his first wife, was running the company.

1884 Under John Derby's management, annual production quadrupled to over 12 million pairs in 1884 and Dents became the premier glove producer in the world.

1937 The company acquired A. L. Jefferies and moved to Warminster, Wiltshire. [2]

Dents are still in business, based in Warminster, Wiltshire; the London and Worcester factories having closed.