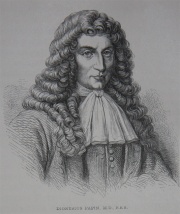 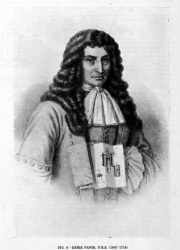 Dr. Denis Papin (22 August 1647 - 1714) was a French physicist, mathematician and inventor, best known for his pioneering invention of the steam digester, relevant to the development of the steam engine.

Born in Blois, (Loir-et-Cher, Centre Région), Papin attended a Jesuit school there, and from 1661 attended University at Angers, from which he graduated with a medical degree in 1669. In 1673, while working with Christiaan Huygens and Gottfried Leibniz in Paris, he became interested in using a vacuum to generate motive power.

Papin first visited London in 1675, and worked with Robert Boyle from 1676 to 1679, publishing an account of his work in Continuation of New Experiments (1680). During this period, Papin invented the steam digester, a type of pressure cooker. He is also credited with the all-important invention of the boiler safety valve.

He first addressed the Royal Society in 1679 on the subject of his digester, and remained mostly in London until about 1687, when he left to take up an academic post in Germany.

As a Huguenot, Papin was greatly affected by the increasing restrictions placed on Protestants by Louis XIV of France and the King's ultimate revocation of the Edict of Nantes in 1685. He left England for Germany in 1687, having been appointed Professor of Mathematics at Marburg by the Landgrave of Upper Hesse. In Germany he was able to live with fellow Huguenot exiles from France.

In 1688 he published proposals for working a pump at some distance from its waterwheel. The waterwheel would work reciprocating air pumps to evacuate pipes leading to pistons which would act on a windlass to raise and lower buckets in a mine or well. He had previously outlined the proposal in vague terms while in England in 1685, and had modified his ideas on the basis of advice from Robert Hooke and other scientists.

Papin had worked with Christiaan Huygens on attempts to use gunpowder to drive the air out of a cylinder containing a piston, and to utilise atmospheric pressure acting on the piston to raise a weight. The vacuum created was less than expected. He resumed his experiments in about 1687, and decided to try the effect of boiling a small amount of water in a cylinder. After driving the air out, he closed the vent, and the steam pressure raised the piston to the top of the cylinder, and the piston rod was latched. The fire was removed from beneath the cylinder, and in time the steam condensed, creating a vacuum. On releasing the latch, atmospheric pressure forced the piston down, raising a weight on a rope attached to the piston rod. He published his findings in 1690. This was an important development, and was the precursor of the atmospheric engine developed by Newcomen and Calley. However, although Papin envisaged applying the principle to various applications, including pumps and paddle boats, there is no record of him having any success in this direction.[1]

In 1695 he moved from Marburg to Kassel.

In 1705 Gottfried Leibniz sent Papin a sketch and description of Thomas Savery's steam pump. Papin set about developing his own pump, which addressed what he regarded as a shortcoming in Savery's device. Savery's pump used the condensation of steam to draw water into a vessel, and then used steam pressure to discharge the water from the vessel and lift it to a height determined by the steam pressure. Papin may have perceived a problem arising from cooling and condensation of the steam initially entering Savery's vessel during the pressurisation stage, and for his engine he introduced a piston which floated in the steam/water chamber. This would have helped prevent contact between the water and the incoming steam, but this may not have been its main purpose: curiously, the piston carried a cylindrical iron block which was first heated to high temperature, and would have to be periodically removed and reheated. The pump would discharge water at fairly high pressure. Some sources assume that the water would impinge upon a water wheel, as in a turbo-machine, but alternatively it could have been raised to a header tank and used on a conventional water wheel. However, Papin's ingenious incorporation of an air vessel seems to imply that a water jet was to be maintained, rather than feeding a header tank.

Details of Papin's engine were published in 1707. It is not clear whether a working model was constructed, but it was not further developed.

Although Papin's invention included a piston, and it pumped water, it was not a piston engine in the sense of Newcomen's, the piston doing no work. Neither was it intended to be capable of raising water from a low level as in Savery's 'fire engine'. The steam was not condensed to create a vacuum. The pump would have to be supplied with water from a source slightly higher than itself. This would presumably pose no great difficulty if the pump was used in conjunction with a conventional water wheel as suggested above, and the water was recycled.

It has been claimed that the London-based scientific establishment conspired to block Papin's invention and steal his ideas. Dickinson[2] states that Papin had submitted his proposal to the Royal Society with a request for a grant of money to carry out experiments. The Society referred the proposal to Savery for comment. Hardly an independent observer, but he had the required practical experience. Savery apparently found nothing new that was worth pursuing, and thought that piston friction would be a problem. Conspiracy theorists might latch onto this as confirmation of sabotage of Papin's efforts. However, it is clear that the heated floating piston arrangement had no future, and the use of high pressure steam carried risks and constructional difficulties of which which Savery would have been all-too aware (although Papin's boiler did have the great advantage of being equipped with a safety valve). The proposal to use the pumped water to drive a water wheel had already been covered by Savery's patent. Further, the problem apparently anticipated by Papin of condensation and heat loss arising from contact between the forcing steam and the water, may not in practice have been a major obstacle needing to be overcome. It will be noted that in the Pulsometer, patented by Charles Henry Hall in 1872, steam acted directly on the water without the intervention of a piston.

A 1947 model of Papin's 1707 steam-powered pump, on display at the Musée des Arts et Métiers (see photo). The vessel on the left is the boiler. Steam passes through the pipe and stop cock to the cylinder containing the floating piston. To the right of the cylinder is a tundish for replenishing the water in the cylinder ready for the next stroke (Papin's diagram showed the top of the tundish to be level with the top of the cylinder). The water passed into the copper air vessel before being discharged from the bottom of the vessel.

It has been claimed (possibly by M. de la Saussaye in 1865) that during his stay in Kassel, Germany, in 1704, Papin constructed a boat powered by a steam engine, mechanically linked to paddles. Spratt[3] states that Papin had proposed a paddle boat driven by three or four pistons working racks via ratchets, and that although a paddle boat was made, it was powered not by steam but par la force humaine, i.e. man-powered. A French source[4] confirms the manual propulsion, and adds that the boat travelled on the River Fulda, before being broken up by boatmen (because Papin had not obtained the necessary permission from the guild that held the monopoly on navigation in the region).

While in Cassel, Papin experimented with the use of very high pressure steam to fire projectiles. An explosion occurred which killed and wounded several people and destroyed part of the workshop. 'Papin had for some time contemplated leaving Cassel. This accident precipitated his departure.' [5]

Papin returned to London in 1707, with the hope that the Royal Society would again employ him as a curator. However, his influential friends there, Robert Boyle and Thomas Hooke, had died. Papin wrote a series of letters to Sir Hans Sloane, seeking help and offering to show many experiments. The Society was not in a position to employ him on a regular basis, but would recompense him for approved demonstrations, with the condition that they 'mayn’t be expensive, but for costly and doubtful experiments they never used to advance money beforehand.' Papin sent twelve papers to the Society, all of which were read at the meetings, although none were thought at that time of sufficient importance to merit publication. This was unfortunate since many of them contained ideas far ahead of their time. On 26 April 1711 he described and demonstrated a model of 'Hessian Bellows' [see below], which could be used in smelting, provoking much interest. Papin was specially thanked for this communication and for his experiments, and it was intimated that any such future discoveries would be acceptable to the Society. There is no evidence that the Society had paid Papin, but it is possible that he received some help from individual Fellows. On 4 January 1712, the Council voted him £10 for his services, but he had not received the money at the time of his last letter to Sloane, dated 23 January 1712. It is thought that he must have died soon after this, and probably quite suddenly, for nothing further was heard of him. [6]

Note: 'Hessian Bellows' describes a remarkably advanced device for the time - a centrifugal fan. In 1705 Papin had written to Dr. Frederick Slare of the Royal Society concerning his improvement to the Hessian Bellows. He stated that he was busy in connection with a coal mine (presumably in Germany) which had been stopped because of impure air, and had improved the 'bellows' from the type whose description was published in 1699. He showed two sketches, one illustrating a centrifugal fan with radial blades within a volute casing. He had made an example with a fan 20.5" diameter and blades 9" long and 2" wide. Papin wrote that 'When I work this Engine with my Foot, it makes such a Wind that it may raise up two pounds weight; and without doubt a stronger Man could do much more:' He envisaged using pipes made of wooden planks to convey air down the mine shaft to allow men to work. In the same letter he mentions experiments which had raised water 70 ft 'by fire', but the Engine 'was left too long in the River, so that the Ice broke it, and carried awaypart of the same. [7].