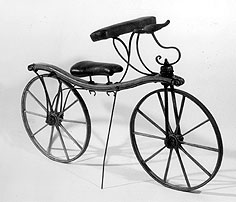 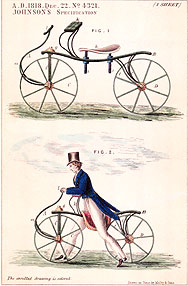 Johnson's, who was sixty years old at this time, patented version featured an elegantly curved wooden frame, allowing the use of larger wheels and was commonly called "hobby horse" or "pedestrian curricle" or "swiftwalker".

In Johnson's model of dandy-horse, like Drais's, the transmission was human-powered transport using the "natural" methods of walking or running, with the rider striking the feet on the ground alternately, left and right.

Although Johnson referred to his machine as a ‘pedestrian curricle’, it was formally referred to as a ‘velocipede’, and popularly as a ‘Hobby-horse’, ‘Dandy-horse’, ‘Pedestrian's accelerator’, ‘Swift walker’ and by a variety of other names.

1818 Patent. 'The Pedestrian Carriage or Machine for promoting health, diminishing the labour of persons walking and enabling them to travel with greater ease and certainty....Letters Patent the last year, 1818, having granted Mr. DENIS JOHNSON, the Patentee the Invention, the sole licence and authority to make and vend the above Patent Machine, and Mr. Johnson having assigned all his right and interest therein to S. MERSEY, Longacre. London....'[1]

1819 February. 'Pedestrian Carriage, by which people may run along the road, with light touches of their feet, at the rate of eight or even ten miles hour. It is to be seen at Mr. Johnson's, the Coachmaker's, Long Acre.'[2]

At least 320 velocipedes were made in the early part of 1819. He also opened riding schools in the Strand and Soho. In May 1819 he introduced a dropped-frame version for ladies to accommodate their long skirts.

For about six months the machine had a high profile in London and elsewhere, its principal riders being the Regency dandies. About eighty prints were produced in London, depicting the 'hobby-horse' and its users, not always in a flattering light.

1819 June. Advertisement 'Johnson's Patent Pedestrian carriage, the Velocipede. S. Mersey, No 71 Long Acre, London, to whom Mr. Johnson (the Patentee) has transferred his right and interest in the Patent...'[3]

1819 By the summer the craze was dying out, and a health warning against the continued use of the velocipede was issued by the London Surgeons.

In Johnson's machine, like that of von Drais, propulsion was simply by ‘swift walking’, with the rider striking his (or her) feet on the ground alternately. However, it led directly (albeit after a long delay) to the invention of the bicycle in the 1860s, when rotary cranks and pedals were attached to the front-wheel hub of a machine based on Johnson's.

1819 Opened a riding school near his workshop and charged a shilling for admission. The price of a 'velocipede' was eight pounds.

1833 Died. His company passed to his son-in-law John Allen, a Master Coach Builder.