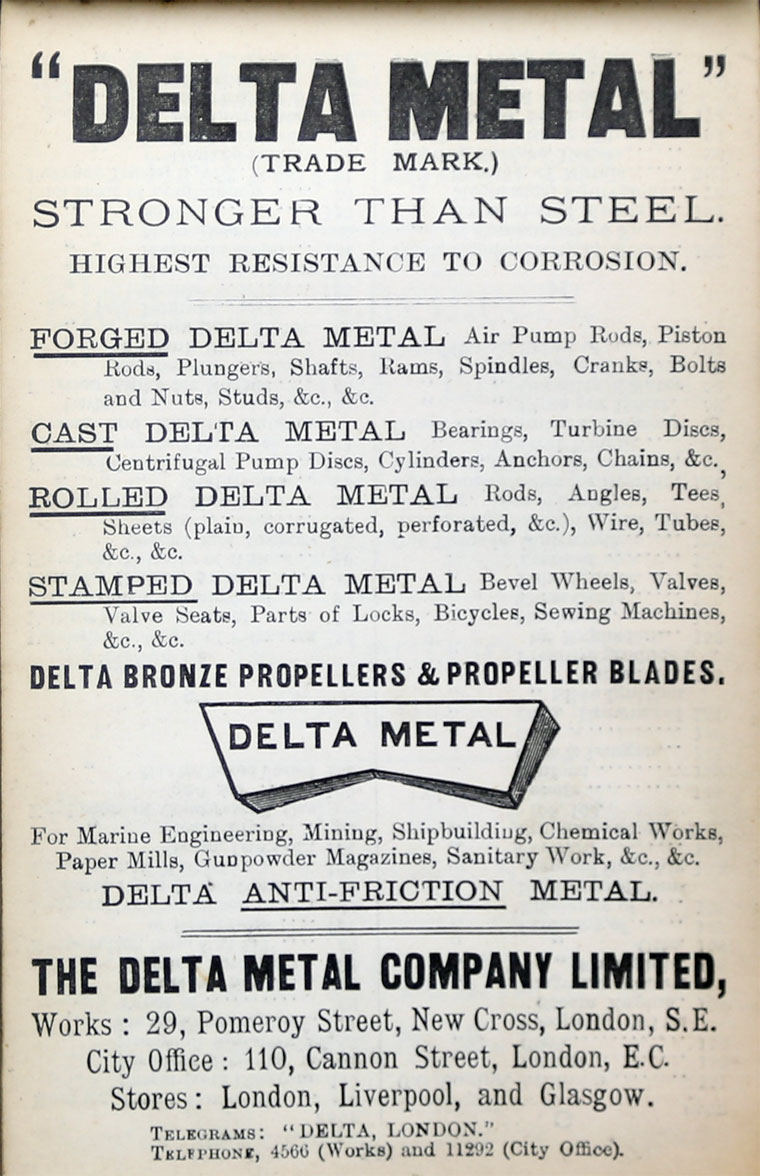 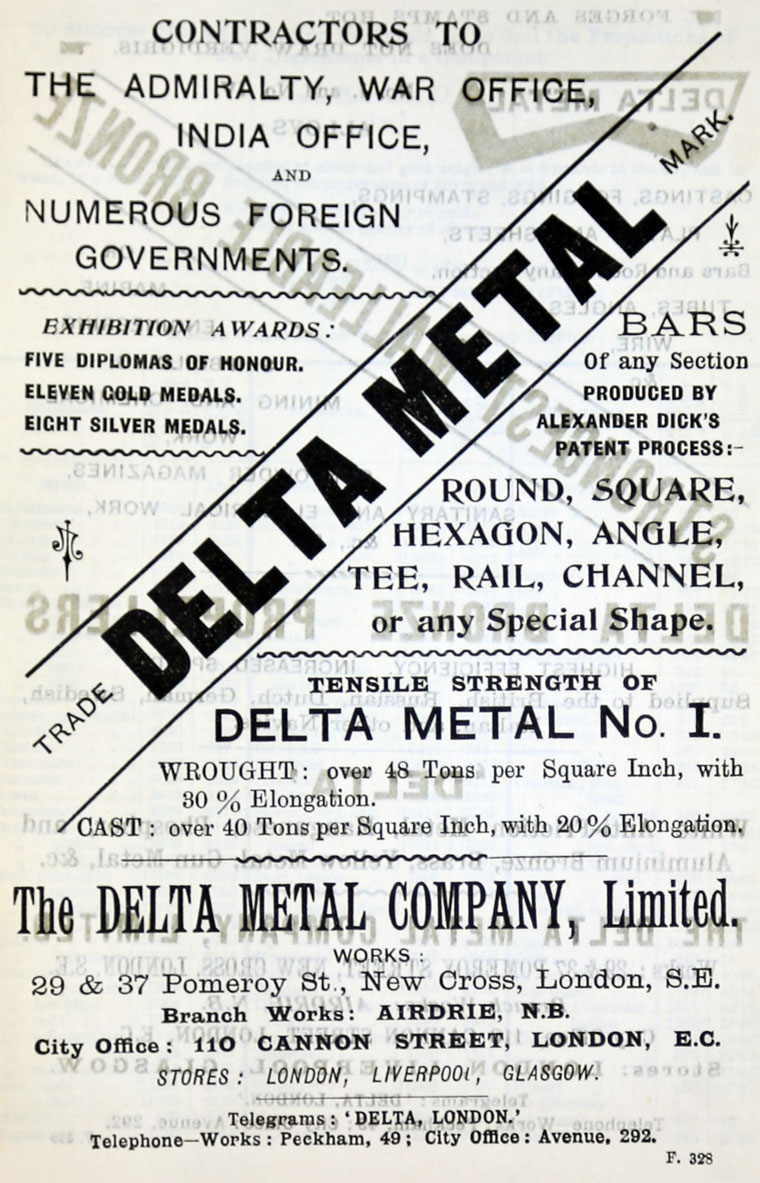 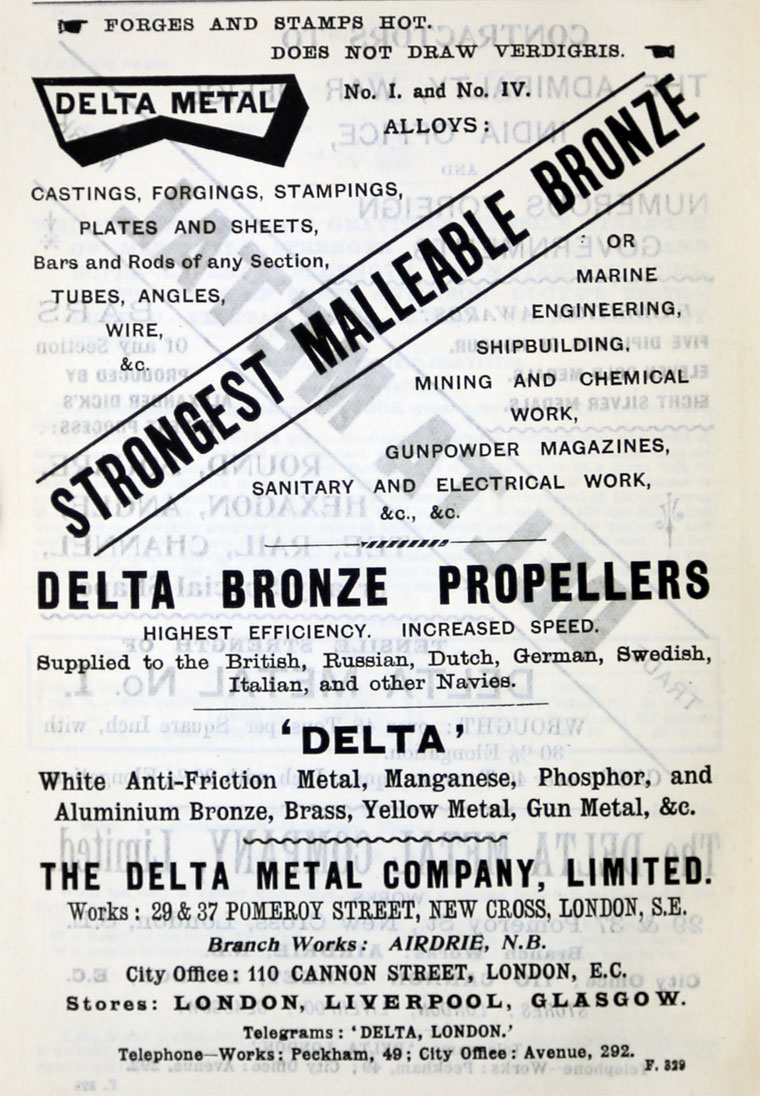 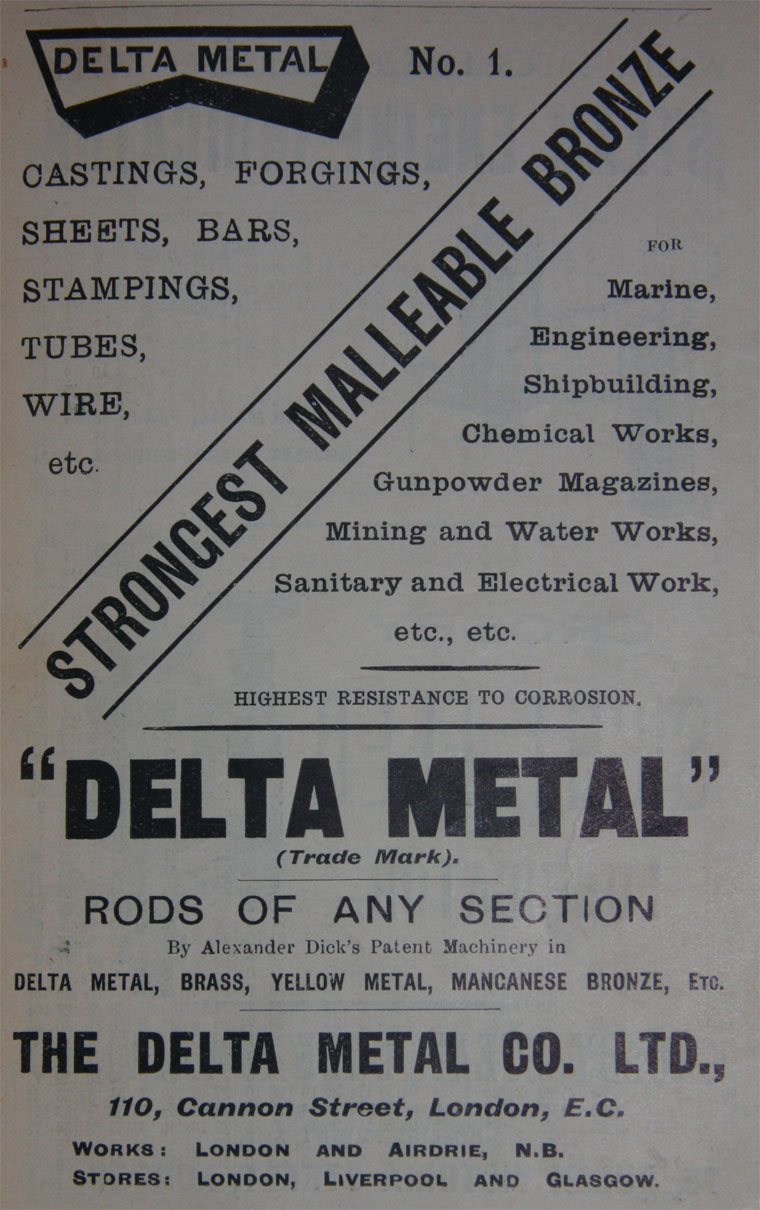 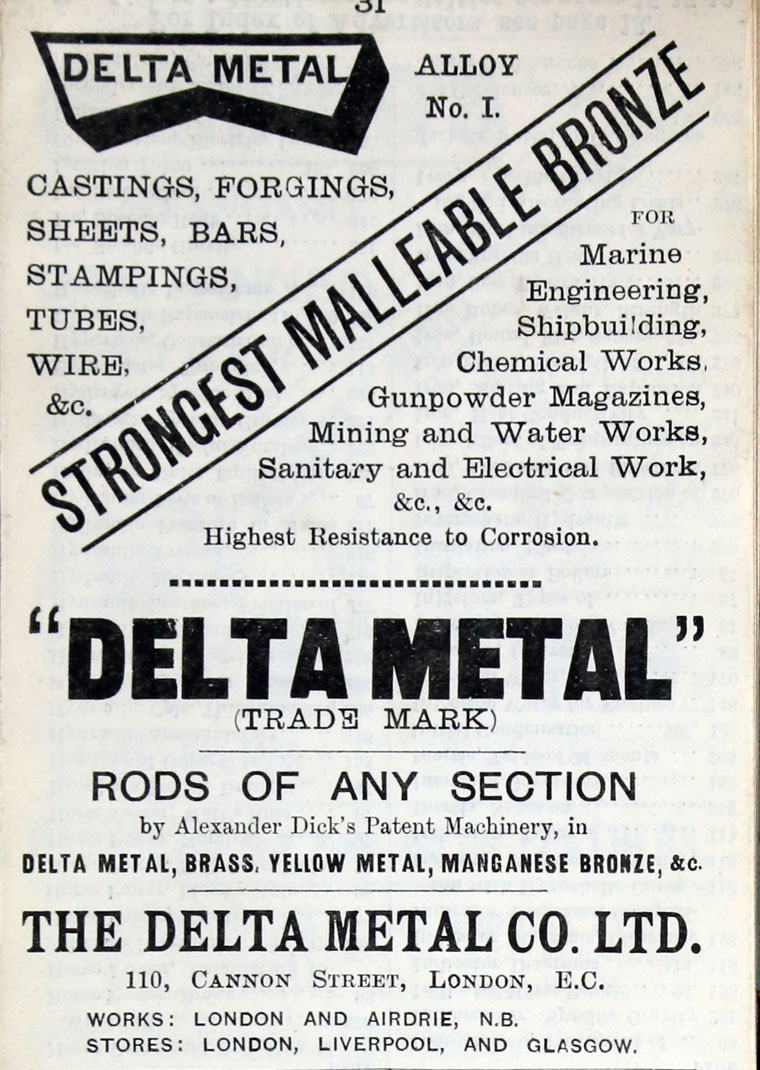 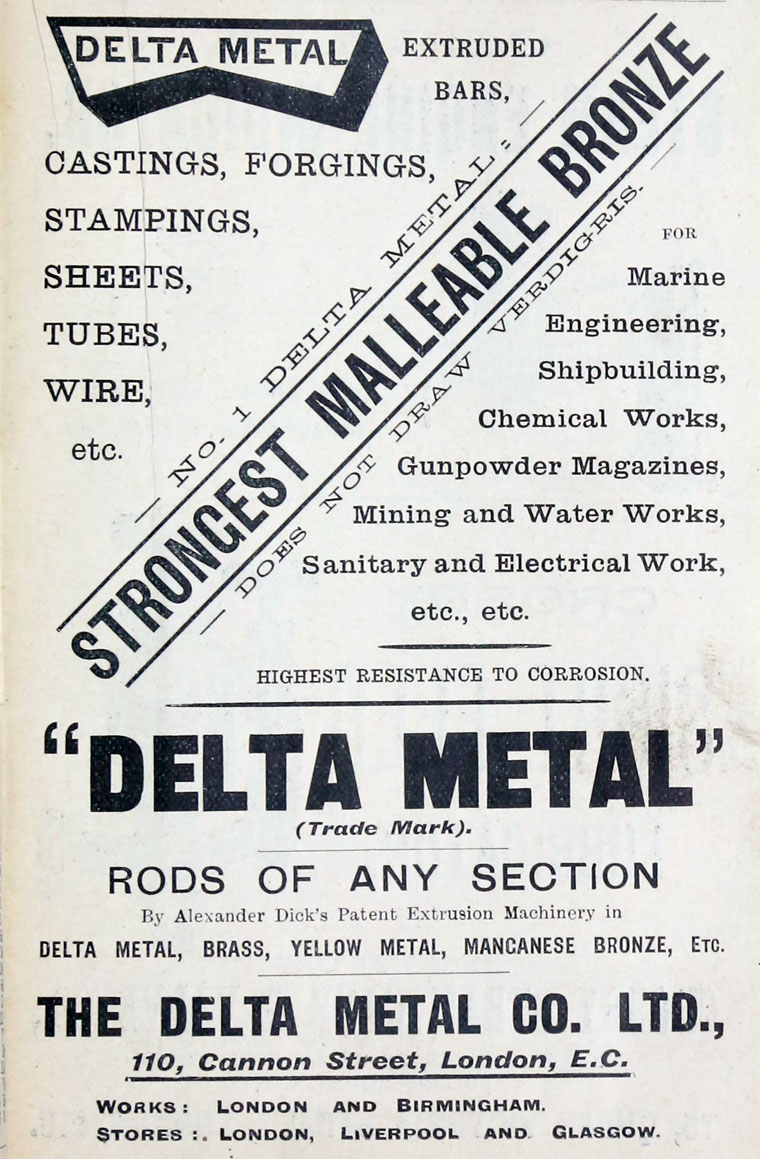 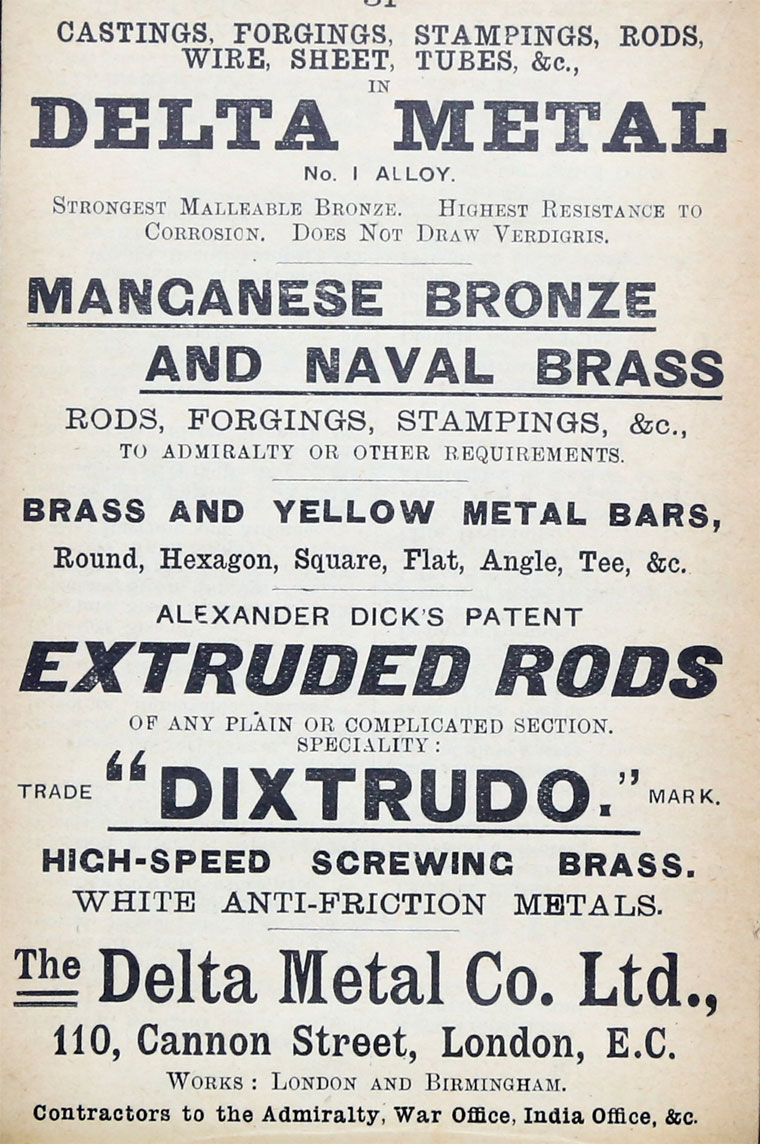 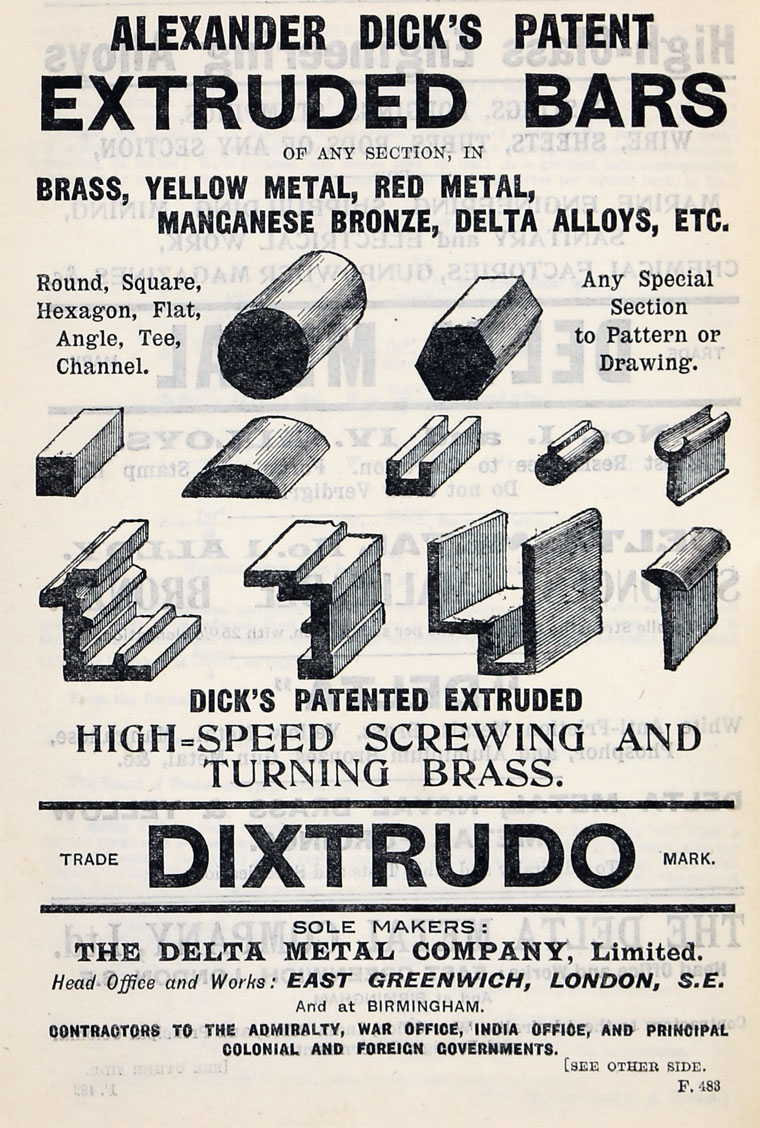 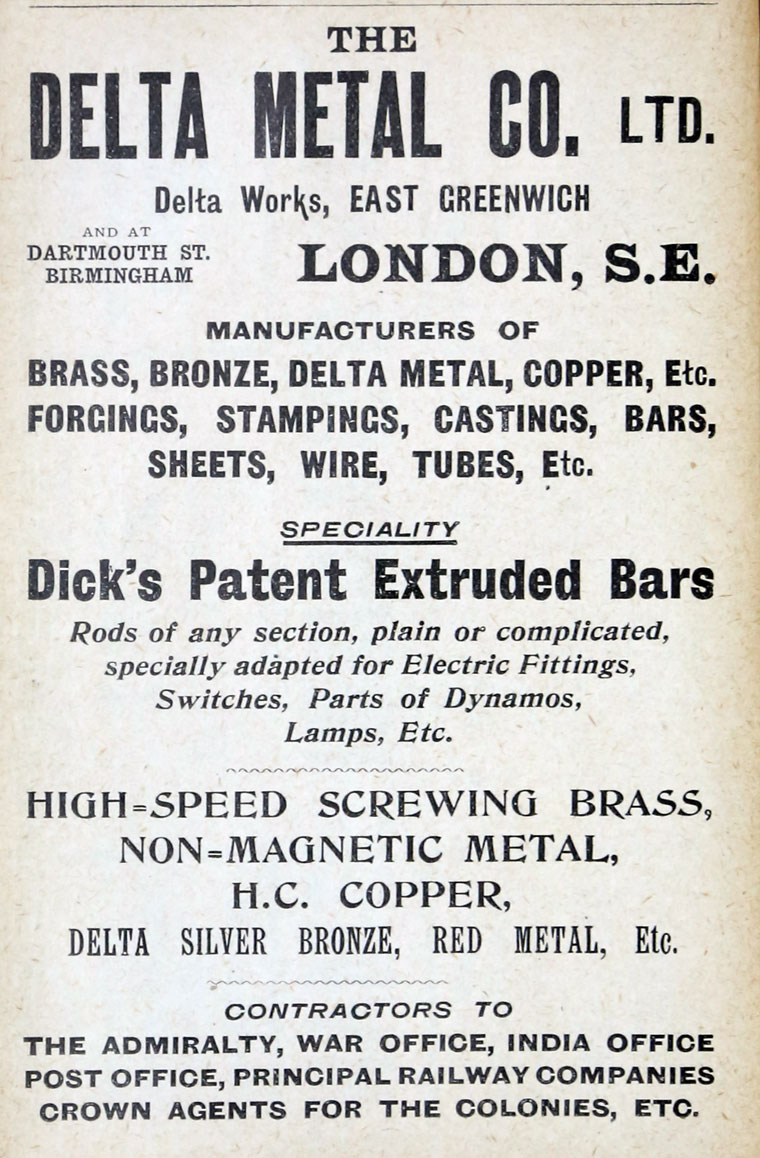 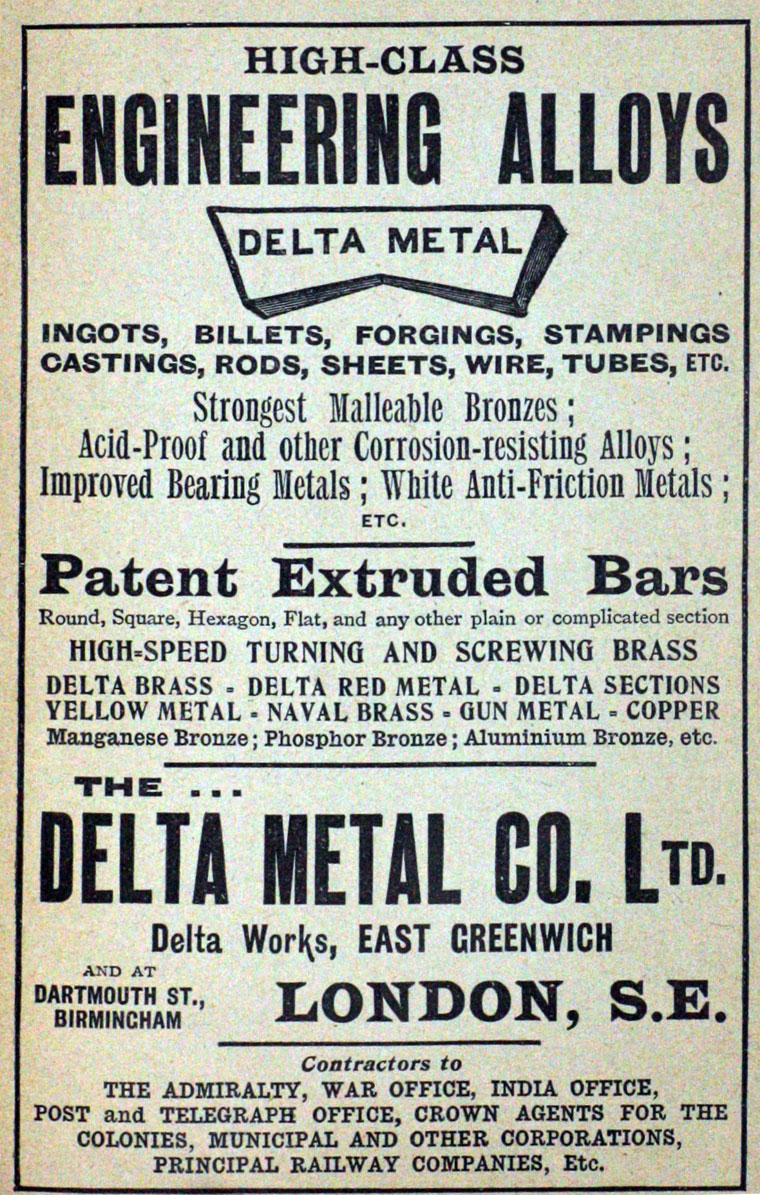 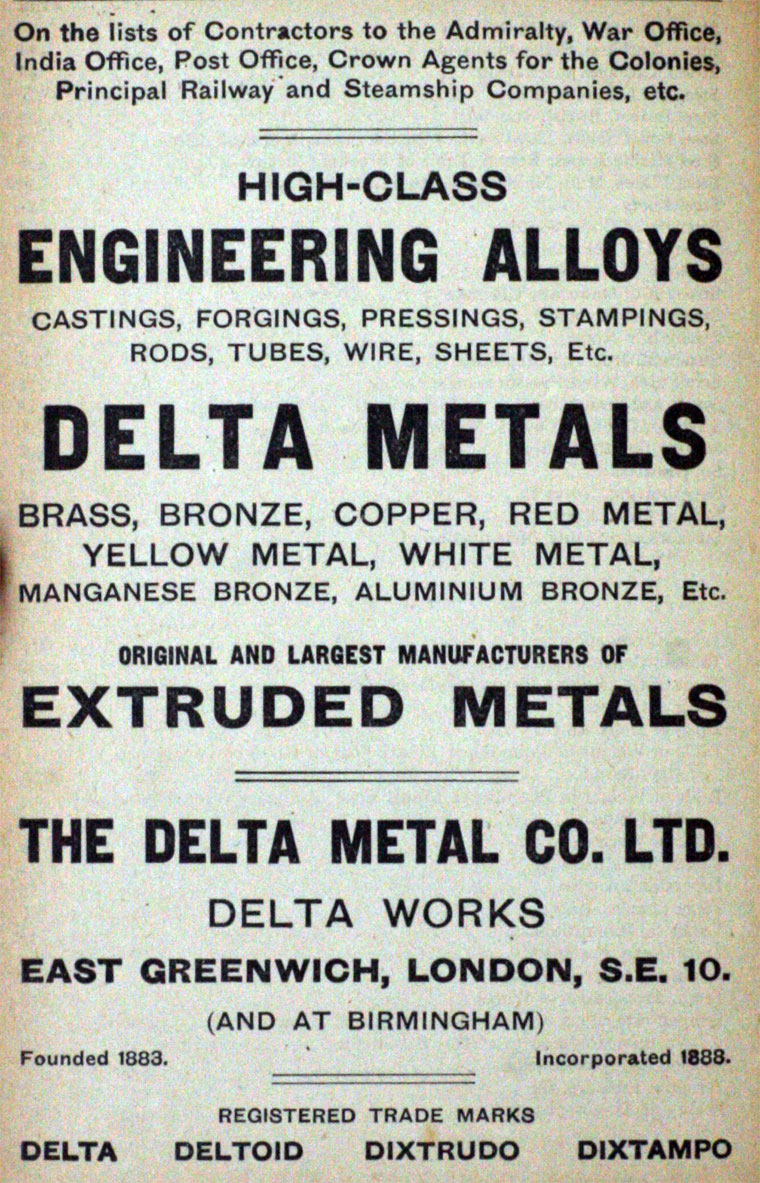 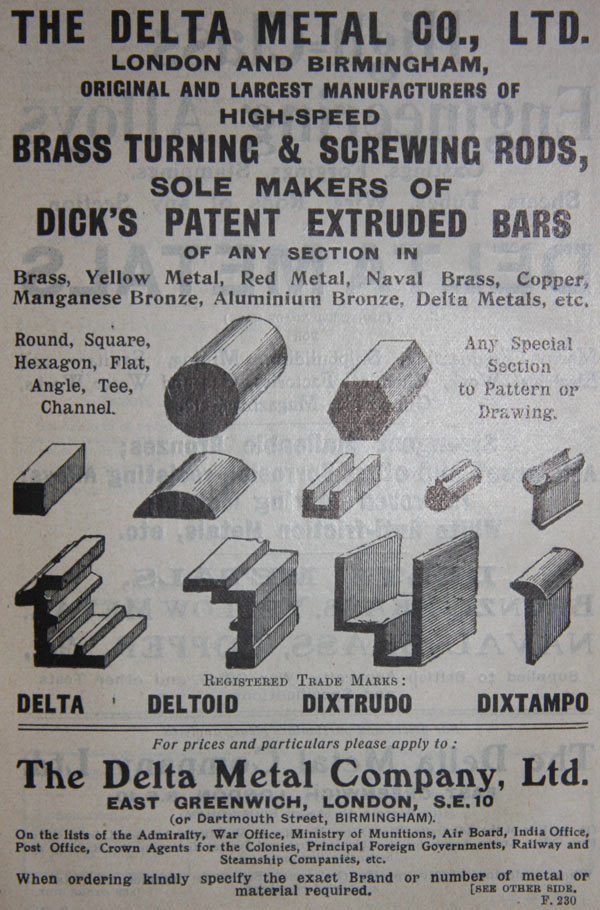 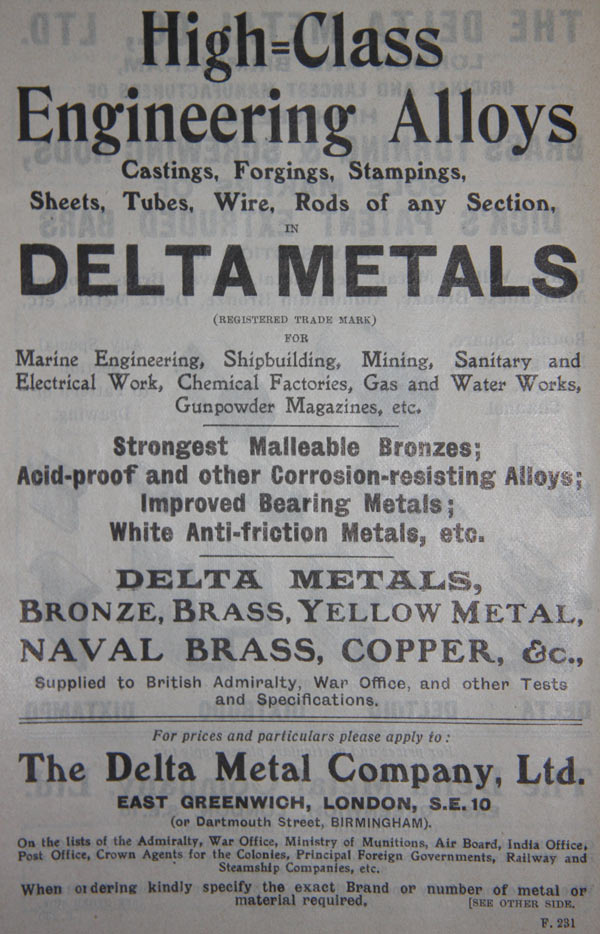 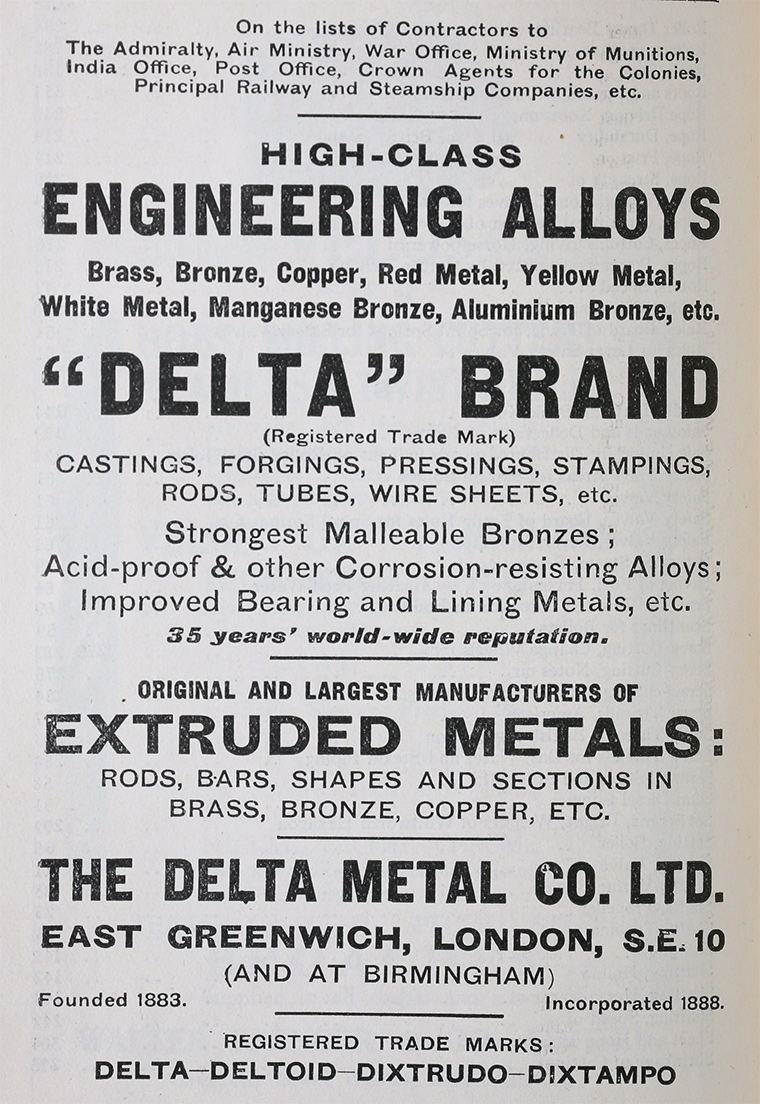 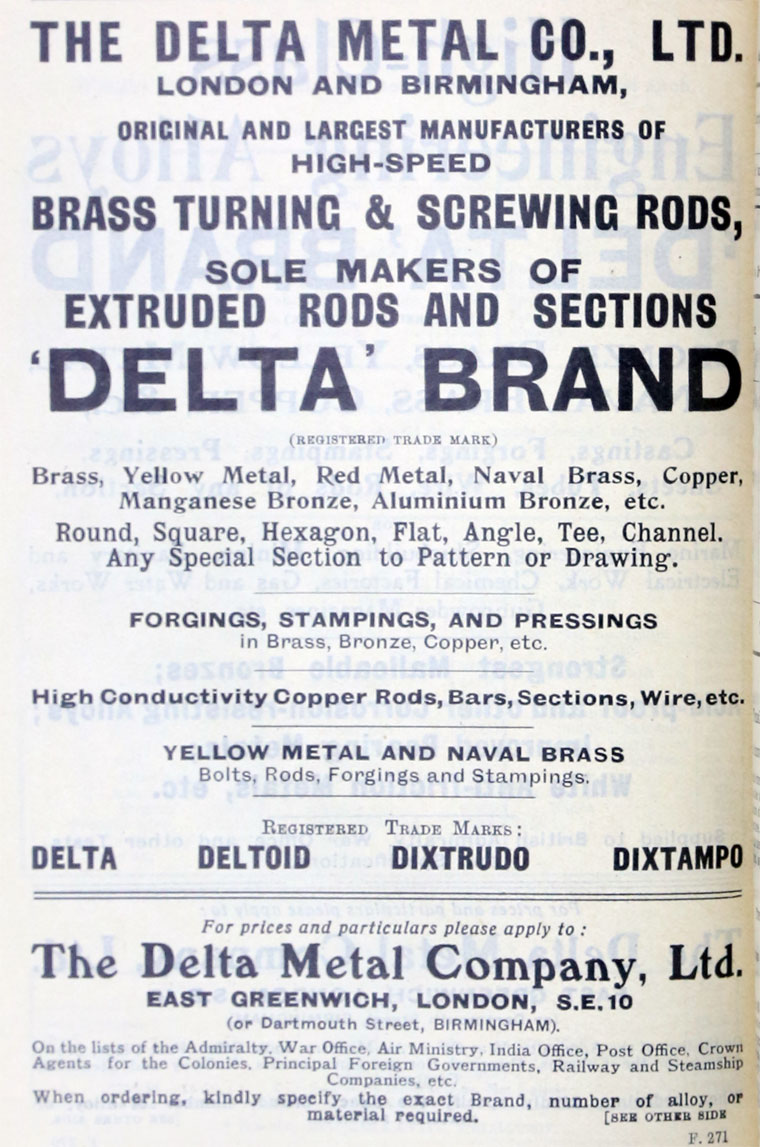 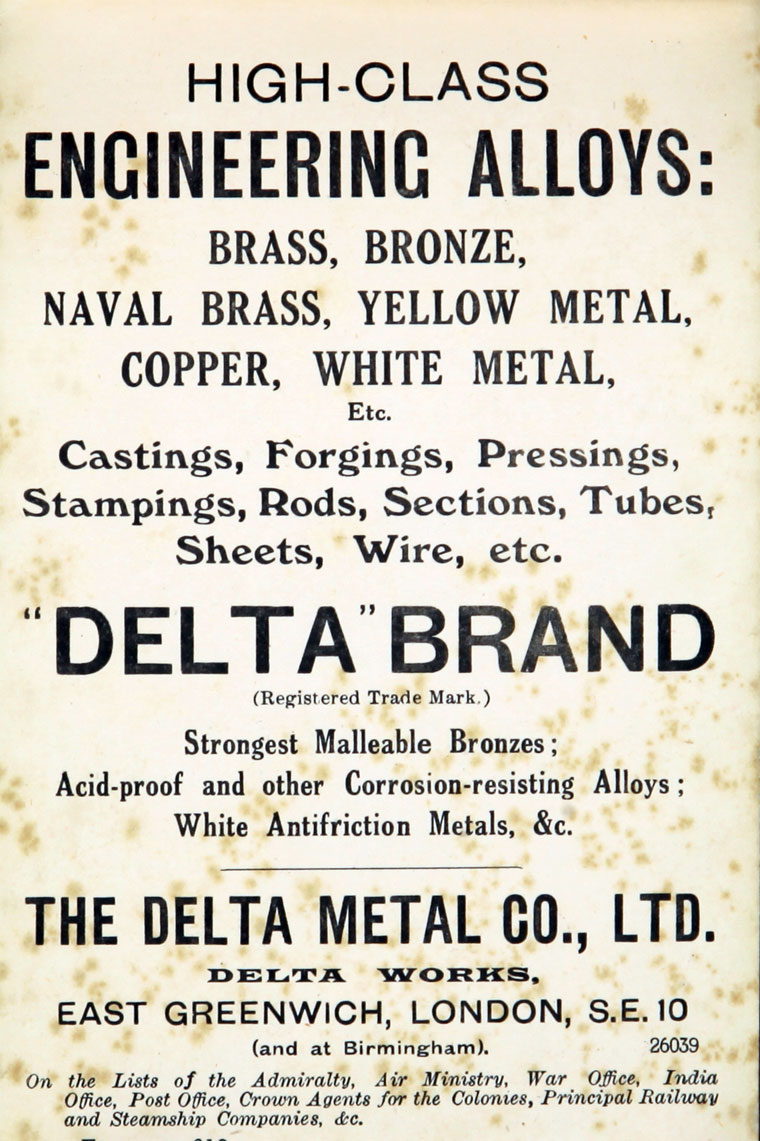 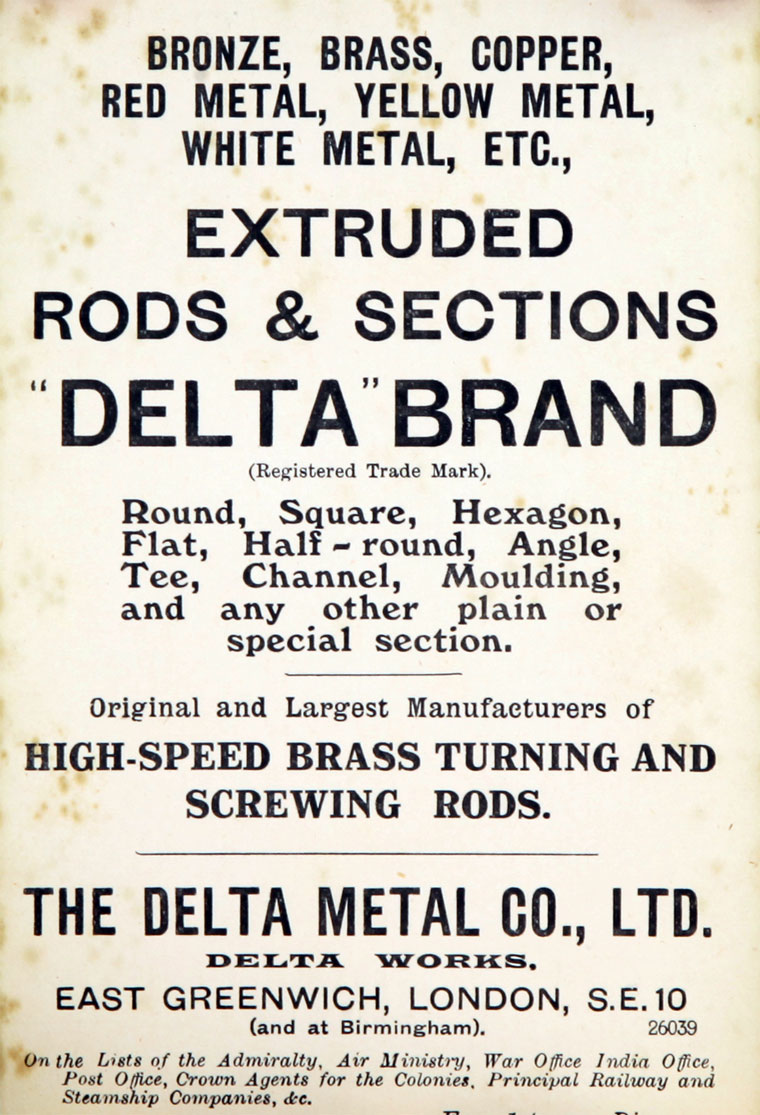 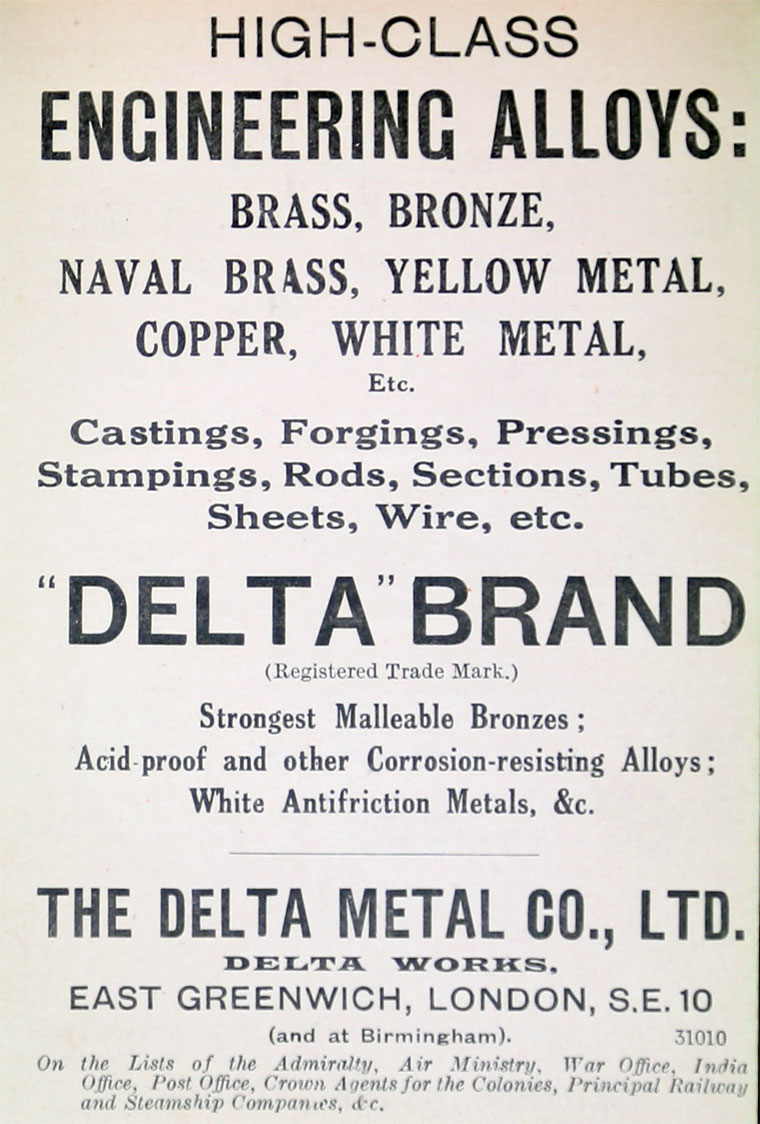 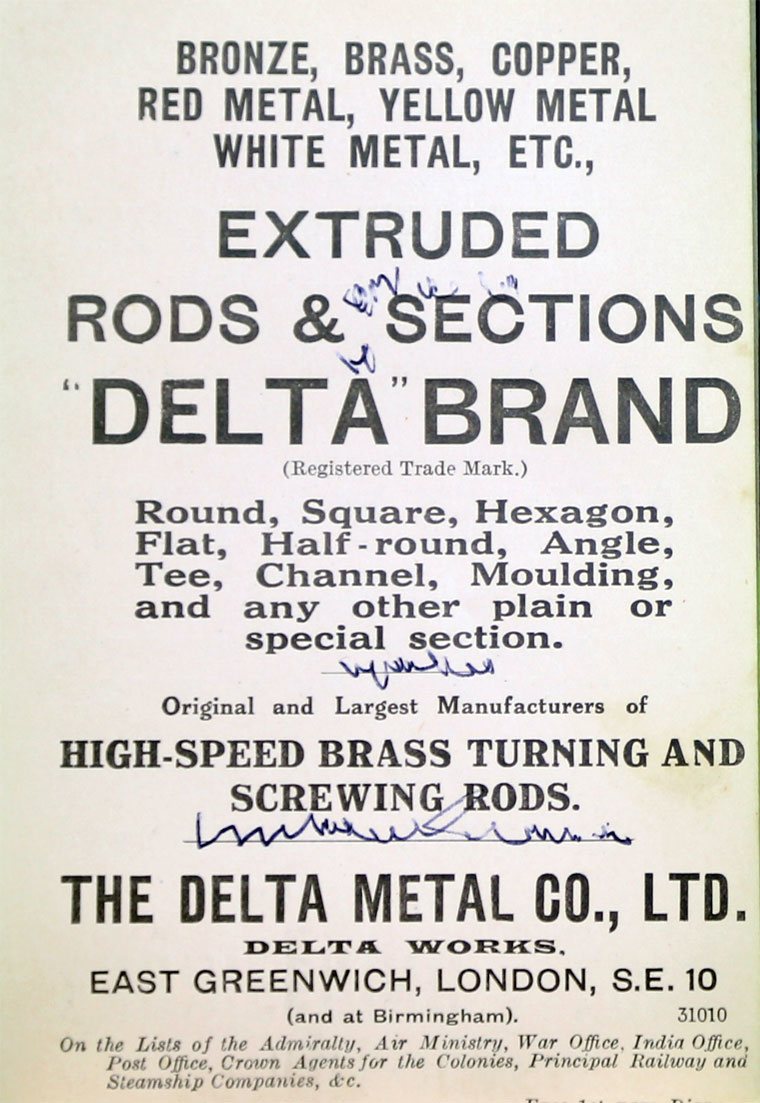 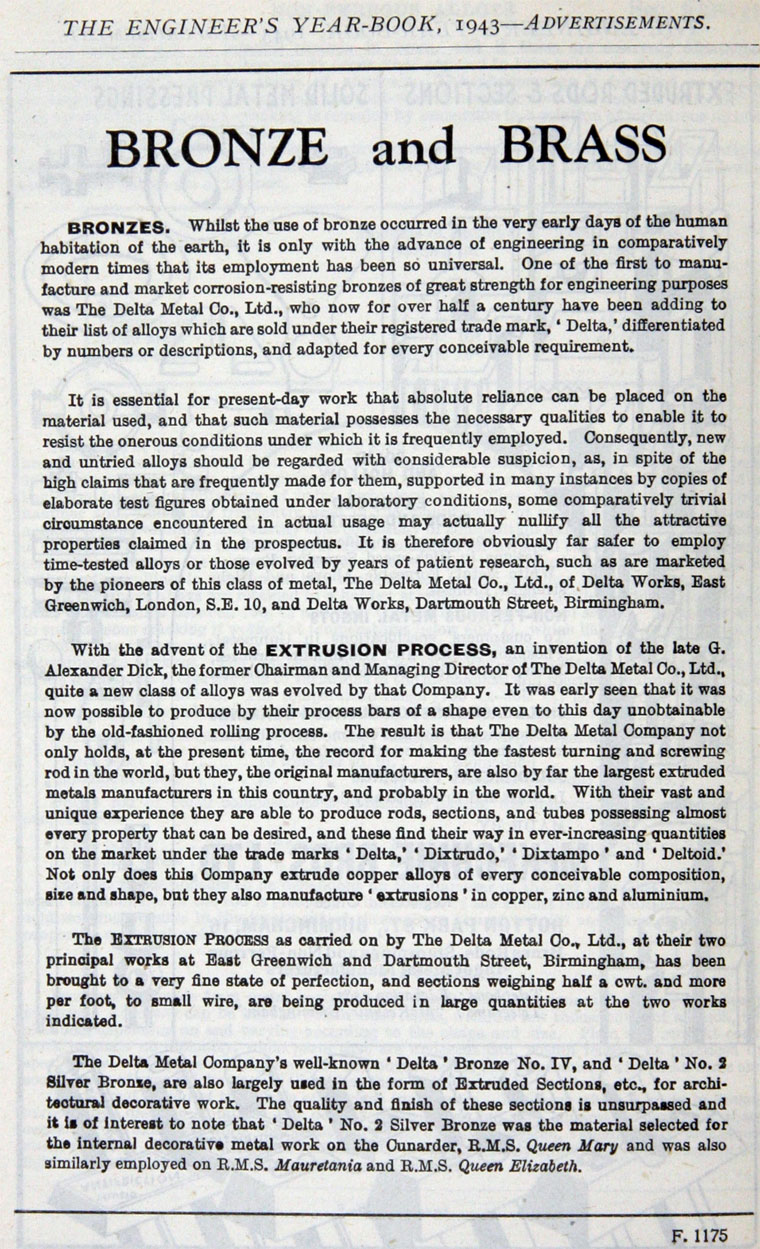 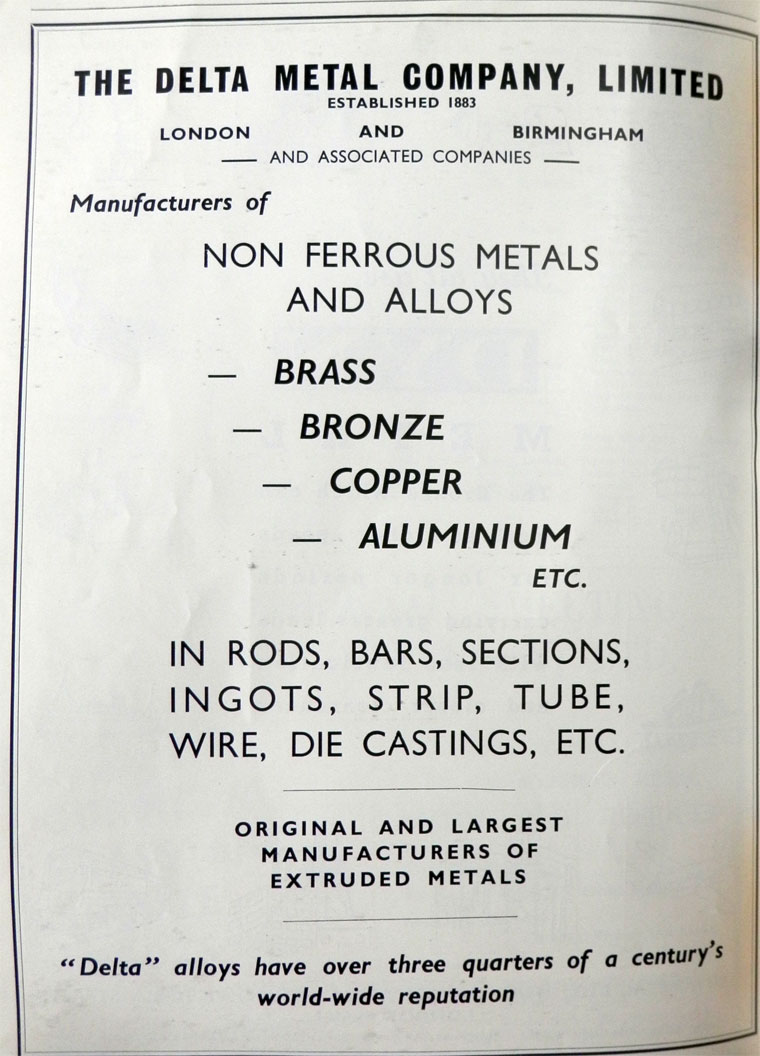 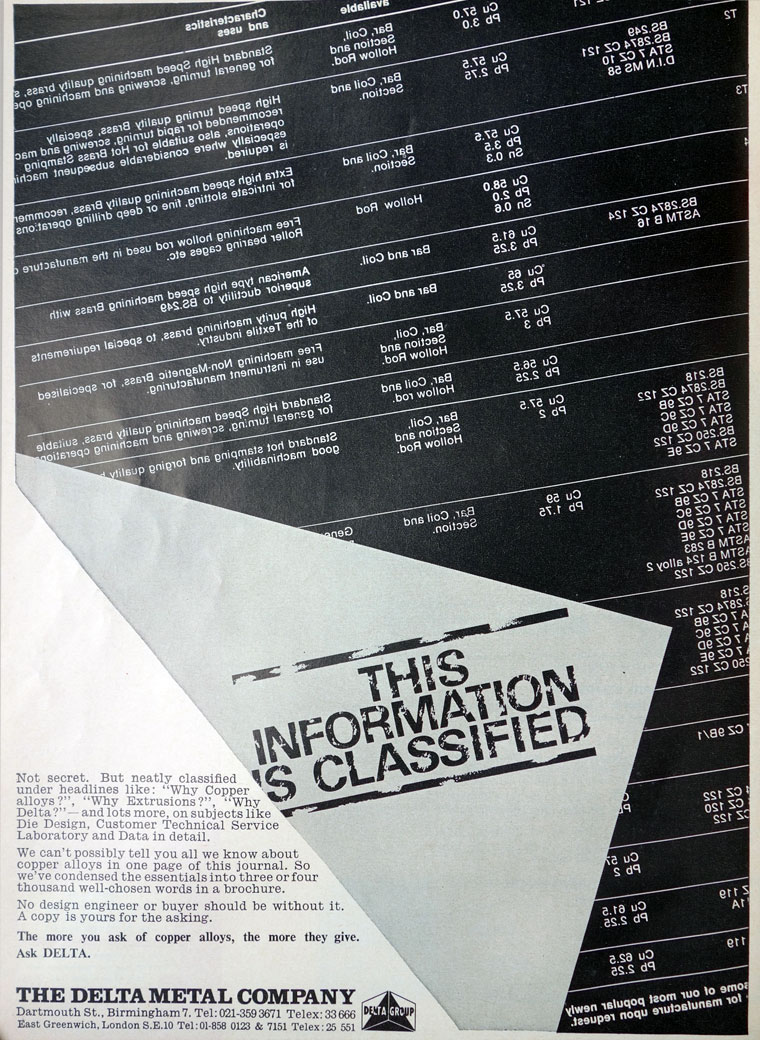 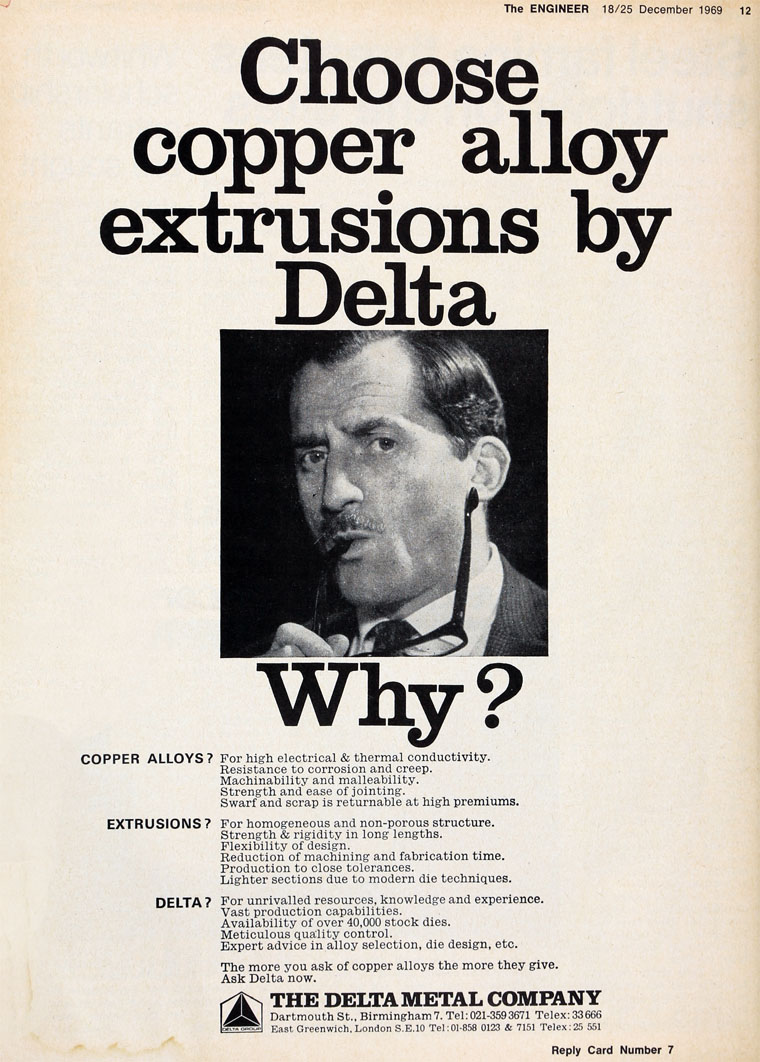 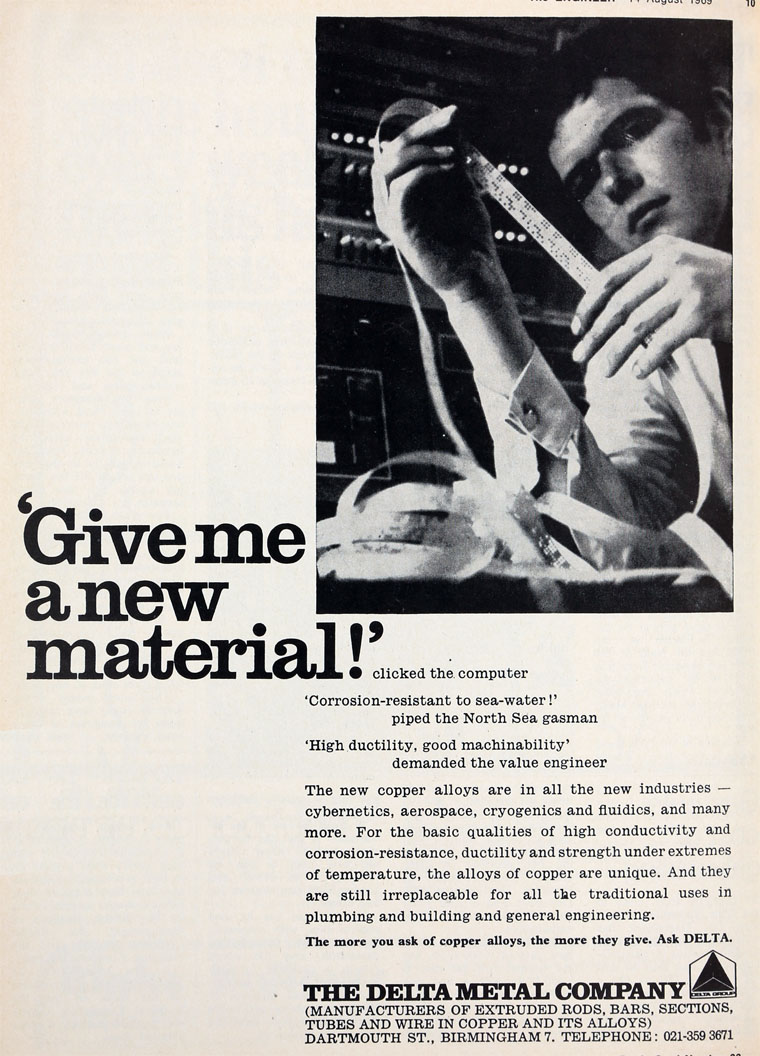 Delta Metal Co, originally at Greenwich and Birmingham, and elsewhere. A large group was formed by takeovers of companies such as Enfield Rolling Mills, Earle, Bourne and Co, Barker and Allen Ltd, Aston Chain and Hook Co, and others. The Delta Group have now largely closed or sold off their metal making interests.

1888 March 12th. Incorporated as a limited company to acquire the business of Alexander Dick, patentee and manufacturer of metallic alloys[1] at Dartmouth Street, Birmingham.

1897 Installed a metal-extrusion press at the Dartmouth Street factory.

1912 Exhibitor at the Non-Ferrous Metals Exhibition at the Royal Agricultural Halls[3].

1957 Acquired Sanbra, a company in which Delta already had a substantial shareholding[11]

1960 Delta Metal Co formed James Booth Aluminium to acquire the aluminium and light alloy interests of its subsidiary James Booth and Co; then sold a 50 percent interest to Kaiser Aluminium[13]

1961 Agreement with Enfield Rolling Mills to form new joint company Delta Enfield Rolled Metals to merge the rolled copper, brass sheet and strip section activities of the two companies; production would continue at Brimsdown and Birmingham[15]. Acquired Davis and Timmins, converting a customer into a subsidiary[16]

1962 Acquired John Webb and Co[17], and Manley and Regulus, makers of water fittings[18], as part of the strategy to acquire users of the metals that the company's mills produced, in order to ensure demand was maintained.

1963 Delta Metal Co and Mappin and Webb formed a joint venture, British Silverware, to hold their interests in tableware products (but not retail). Included the acquisition of Walker and Hall[19]

1964 Acquired Johnson and Phillips, to complement its Enfield Cables subsidiary[23] and the outstanding shares in Enfield-Standard Power Cables[24]

1978 Refrigeration Appliances was a member of the Enfield Rolling Mills Division of the Delta Group, specialising in the manufacture of heat exchangers and components for commercial and industrial refrigeration, for food processing and storage[30]

1988 Acquired FL Surprenant of the USA

1988 Formed Delta Crompton Cables, 64 percent owned by Delta Metal Co and 36 percent by Hawker Siddeley, to pool most of their cable interests[31]