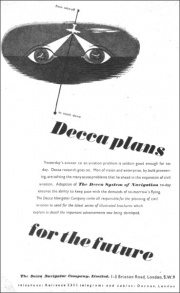 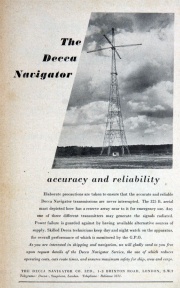 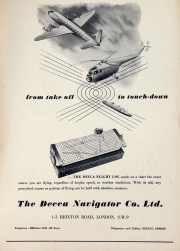 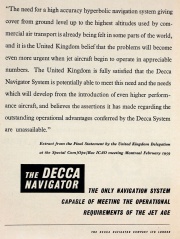 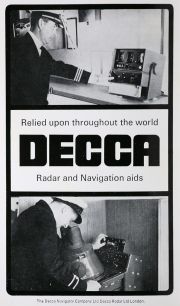 of Maidenhead, manufacturers of radar and navigation systems.

1939 On the first day of the war, Mr William O'Brien (of Chicago) wrote to Mr H. F. Schwartz of the Decca Record Co describing an idea for use of radio for navigating aircraft. The authorities in Britain and the USA were sceptical about its practicability. Nevertheless Decca carried on work in London and, in 1941, set up a laboratory for the purpose in Hollywood, USA. By 1942 the Admiralty were sufficiently convinced to undertake trials. By January 1944, demonstrations had convinced the authorities about the system's capabilities and it was selected for use on D-Day to guide the invasion fleet. In 1945 use of the system was extended to aircraft which was Decca's own chosen application. Edward Roberts Lewis, director of Decca, contributed greatly to the development and introduction of this system[1].

1945 Advert pointing out that Decca Navigator guided the invasion fleets on D-Day and was now available for other use in other vessels[2].

1946 First radio towers of the permanent network expected to be operating by January[3].

1948 Decca Navigator System was approved by 32 countries for marine use[4].

1960 Lost against American interests in the selection by the ICAO of a system for aircraft guidance.

1961 Manufacturers of navigational systems, including R.D.F. device, to assist ships and planes to navigate blind.