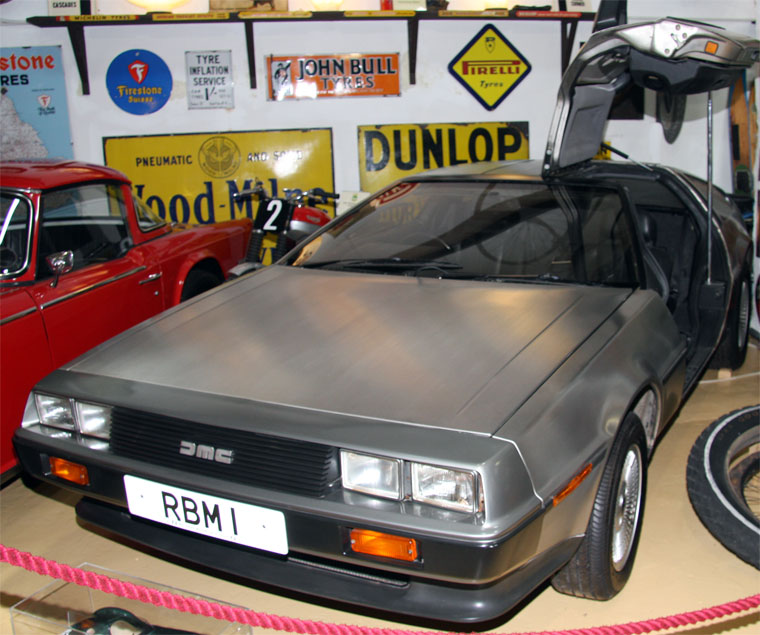 It is remembered for the one distinctive model it produced – the stainless steel De Lorean DMC-12 sports car featuring gull-wing doors – and for its brief and turbulent history, ending in receivership and bankruptcy in 1982. Near the end, in a desperate attempt to raise the funds his company needed to survive, John De Lorean was filmed appearing to accept money to take part in drug trafficking, but was subsequently acquitted of charges brought against him on the basis of entrapment

John De Lorean founded the De Lorean Motor Company in Detroit, Michigan on October 24, 1975. He was already well known in the automobile industry as a first-rate engineer, maverick business innovator, jetsetter and youngest person to become a General Motors executive. Investment capital came primarily in the form of business loans from the Bank of America and from the formation of various partnerships and private investment from select parties, including The Tonight Show host Johnny Carson. Money was also gained later through a dealer investment program in which those dealerships offering De Lorean's cars for sale were made shareholders in the company.

De Lorean also sought lucrative incentives from various government and economic organizations to pay for constructing the company's automobile manufacturing facilities. To gain these, he looked to build his first factory in a country or area where unemployment was particularly high. One candidate was the Republic of Ireland, although the country's then Minister for Industry and Commerce, Des O'Malley, decided not to support the project. A deal in Puerto Rico was about to be agreed when De Lorean took up a last-minute offer from the Northern Ireland's Industrial Development Board (IDB). The British government was very keen to create jobs in Northern Ireland to reduce sectarian violence by reducing unemployment. As part of this offer, De Lorean was apparently under the impression that the British government would provide his company with Export Credit financing. This would provide a loan of 80% of the wholesale cost of the vehicles (US$20,000) upon completion and delivery for shipping.

In October 1978, construction of the 6-building, 660,000 square foot (61,000 m²) manufacturing plant began in Northern Ireland and was completed in 16 months by Farrans McLaughlin & Harvey. Officially known as DMCL (De Lorean Motor Company, Ltd.), the facility was located in Dunmurry, a suburb of Belfast. It was situated on an interface between two communities with differing religious predominations; Twinbrook (Catholic), and Dunmurry (Protestant). The facility had separate entrances for each side, but this was more of a geographic convenience than it was for religious segregation.

Unit production was scheduled to begin in 1979, but engineering delays and budget overruns caused the assembly lines to start in early 1981. Workers at the factory were generally inexperienced; many never had jobs before joining DMC. This may have contributed to the reported quality issues attributed to the early production vehicles and the subsequent establishment of Quality Assurance Centers (QAC) located at various delivery locations. QACs were set up in California, Delaware and Michigan where some of the quality issues were to be addressed and resolved before delivery to dealerships. Some of the issues related to the fitting of body panels, higher-output alternators, and gullwing door adjustments.

The combined efforts of quality assurance improvements at the factory and the post-production quality assurance done at the QACs were generally successful, although workmanship complaints would still occasionally arise; the 1981 De Loreans were delivered with a 12 month, 12,000 mile warranty. Though by 1982, improvements in components and the more experienced workforce meant that production quality was vastly improved. Disputes between dealerships and customers arose later because many dealerships refused to do more warranty work because they were not reimbursed.

It would seem that the eventual lack of demand, unforeseen cost overruns, and unfavorable exchange rates began to take their toll on DMC's cash flow in late 1981. The company had estimated their break-even point to be between 10,000 and 12,000 units, but the limiting demand factors precipitated a falloff in sales to somewhere around 6,000. In response to the income shortfall De Lorean was experiencing, a restructuring plan was devised where a new "DeLorean Motors Holding Company" would be formed, which in turn would have become corporate parent to DeLorean Motor Company and each of its subsidiaries: DeLorean Motor Cars Limited (manufacturer), DeLorean Motor Cars of America (distributor in the U.S.) and DeLorean Research Partnership (a research and development company). In January 1982, due to SEC questions about the company's viability, the company was forced to cancel the stock issue for the holding company that DeLorean had hoped would raise about $27 million.

John De Lorean then lobbied the British government for aid, but was refused unless he was able to find a matching amount from other investors. What followed is a matter of debate between the British government, the FBI, the DEA, De Lorean, his investors, and the US court system. At some point in 1982, John De Lorean became the target of an FBI sting operation designed to arrest drug trafficking criminals. He was arrested in October 1982 and charged with conspiring to smuggle $24 million worth of cocaine into the US. The key element of evidence for the prosecution was a videotape showing DeLorean discussing the drugs deal with undercover FBI agents Benedict (Ben) Tisa and West, although De Lorean's attorney Howard Weitzman successfully demonstrated to the court that he was coerced into participation in the deal by the agents who initially approached him as legitimate investors. He was acquitted of all charges, but his reputation was forever tarnished. After his trial and subsequent acquittal, De Lorean quipped, "Would you buy a used car from me?"

In the end, sufficient funds were never raised to keep the company alive. The De Lorean Motor Company went bust in 1982, taking with it 2,500 jobs and over $100 million in investments. The British government attempted to revive some usable remnants of the manufacturing facility without success, and the Dunmurry factory was closed. De Lorean himself retired in New Jersey, and the dream with which he had mesmerised Britain's Labour government, of industry rising out of the ashes of Ulster's sectarian conflict, was shattered. He claimed that the DMCL was deliberately closed for political reasons, and at the time of closing was a solidly viable company with millions of dollars in the bank and two years of dealer orders on the books.