Gipsy Major. Exhibit at the National Museum of Flight.

Gipsy Major IF. Exhibit at the Shuttleworth Collection.

Gipsy-Six-R. Exhibit at the Shuttleworth Collection. 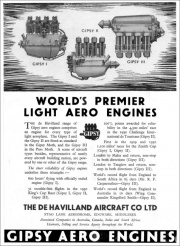 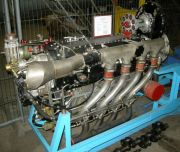 Gipsy Major engine from Saro Skeeter helicopter, on display at the Helicopter Museum in Somerset

Note: This is a sub-section of De Havilland.

The de Havilland Gipsy Major or Gipsy IIIA is a four-cylinder, air-cooled, inline engine used in a variety of light aircraft produced in the 1930s including the famous Tiger Moth biplane.

The engine was a slightly modified Gipsy III which was effectively a de Havilland Gipsy engine modified to run inverted so that the cylinders pointed downwards below the crankcase. This allowed the propeller shaft to be kept in a high position without having the cylinders blocking the pilot's forward view over the nose of the aircraft.

One initial disadvantage of the inverted configuration was the high oil consumption (up to 4 pints per hour) requiring regular refills of the external oil tank, this problem improved over time with the use of modified piston rings. The Major was a slightly bored out (118 mm from 114 mm) Gipsy III.

1960 Flight testing of the turbosupercharged Major 215 (military, Major 140) had been in progress for over a year. As the powerplant of the Westland Skeeter helicopter it enabled the l hour rating of 220 b.h.p. to to be maintained to 4,000ft at ISA+30°C or to about 8,000ft under standard conditions[1]