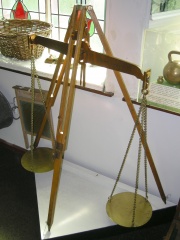 He continued in business until his death in 1799[1]

1799 His wife, Mary, took over the business, and continued to run it until 1844, using her name and description 'widow of Charles De Greve' on the products.

1802 Partnership dissolved. '...the Partnership heretofore carried on by Charles De Grave and John Sawgood, of St. Martin's-le-Grand, London, Beam and Scale-Makers, is dissolved by mutual Consent; and all Debts now due and owing to the said Concern are to be paid to Richard Wood, of Queen-Street, Cheapside, London, Beam and Scale Maker, John Wainer, of the Crescent, Jewin-Street, London, Brass-Founder, and Joseph Bitterton, of Aldersgate Street, London, Brass-Founder, to whom the said Debts are duly assigned:...'[2]

1840 Advertisement. M. De Grave and Son announce that all the scales in Post Offices in the UK are made by them. Of 59 St Martin's-le-Grand.[6]

1844 Mary De Grave was succeeded by her son, Charles.

1851 De Grave, Short and Fanner exhibited at the Great Exhibition

After William Fanner's death, the business reverted to the De Grave, Short and Co name.

1922 The firm became part of the Avery organisation[8]

1935 Harrington moved to the Oertling section; fast progress to foreman in balance assembly.

1942 Harrington began making balances in his garden shed. At some unknown date this grew into commercial making, selling through H. M. Stanley. He was still employed at Oertling.

c.1946 Left Oertling; Harrington was by then foreman in fine balance repairs at No. 23 Charterhouse Street, beneath the De Grave Short showroom. With Henry Morton Stanley he set up Stanton Instruments Ltd.