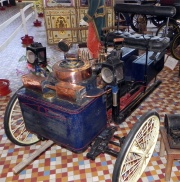 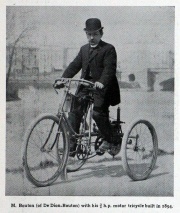 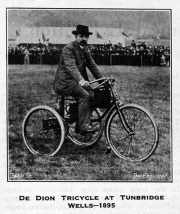 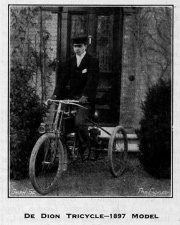 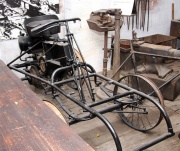 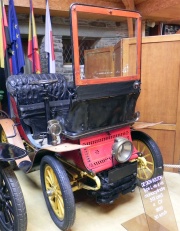 De Dion-Bouton was a French automobile manufacturer operating from 1883 to 1932.

1883 Bouton and Trépardoux had been making small steam engines and toys when they met de Dion who offered to go into partnership with them forming De Dion, Bouton et Trépardoux in Paris in 1883.

By the end of 1883 the new company had made an improved boiler for small boats and also fitted one to a steam-powered automobile. This had the boiler and engine mounted at the front driving the front wheels through belts and rear wheel steering.

1884 An improved vehicle was made with front wheel steering and rear wheel drive and seats for four people. This still exists in road worthy condition and has been a regular entry in the London to Brighton Veteran Car Run.

1885 Two more cars were made and followed by a series of lightweight two cylinder, three wheeled models which from 1892 had Michelin pneumatic tyres fitted.

In 1893 steam tractors were introduced which were designed to tow horse-type carriages and these used an innovative axle design which would become known as the de Dion tube where the location and drive function of the axle are separated.

In 1893, following some experiments, de Dion became convinced that the future lay in the internal combustion engine. Trépardoux was not to be convinced and left the company in 1894 which was then renamed De Dion, Bouton et Compagnie.

A new small single cylinder engine of 137 cc was built which ran at 3,000 rpm and used electric ignition. Both inlet and exhaust valves were overhead and a flywheel was fitted to each end of the crankshaft. The engine was fitted to a three wheel bicycle based frame bought in from Decauville and put on the market in 1896 with the engine enlarged to 185 cc. The petite voiture remained in production until 1902.

1900 They produced the vis-a-vis with the engine under the seat and drive to the rear wheels through a two speed gearbox.

The engine moved to the front in 1903 in the Populaire model with 700 or 942 cc engines, the latter being powerful enough to allow trucks to be added to the cars, and by the end of the year reverse gear had also appeared.

In 1900, de Dion-Bouton was the largest automobile manufacturer in the world producing 400 cars and 3,200 engines that year. The company soon began producing engines and licenses for other automobile companies with an estimate of 150 makes using them.

1901 A small number of electric cars were made.

1904 Introduced the four-cylinder 2,545 cc Type AD. The cars were becoming conventional with the radiator moving in front of the engine and the clutch changing from hand lever to pedal.

During World War I the company made gun parts, armoured vehicles and aero engines as well as cars and trucks.

Bus manufacturer began in 1884 and finished after WWII