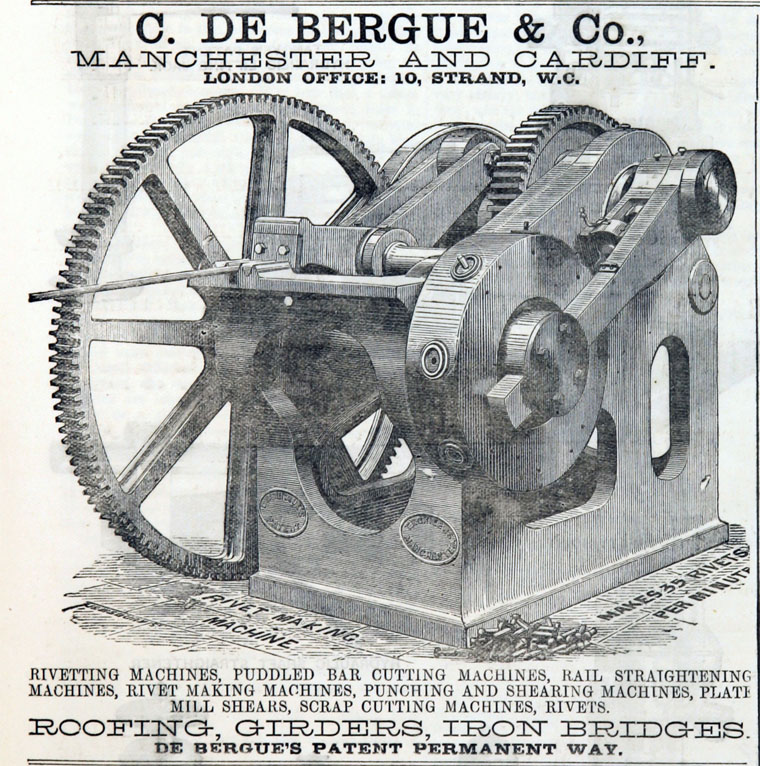 1875. Castle Hill viaduct on the Devon and Somerset Railway, engineered by Richard Hassard. 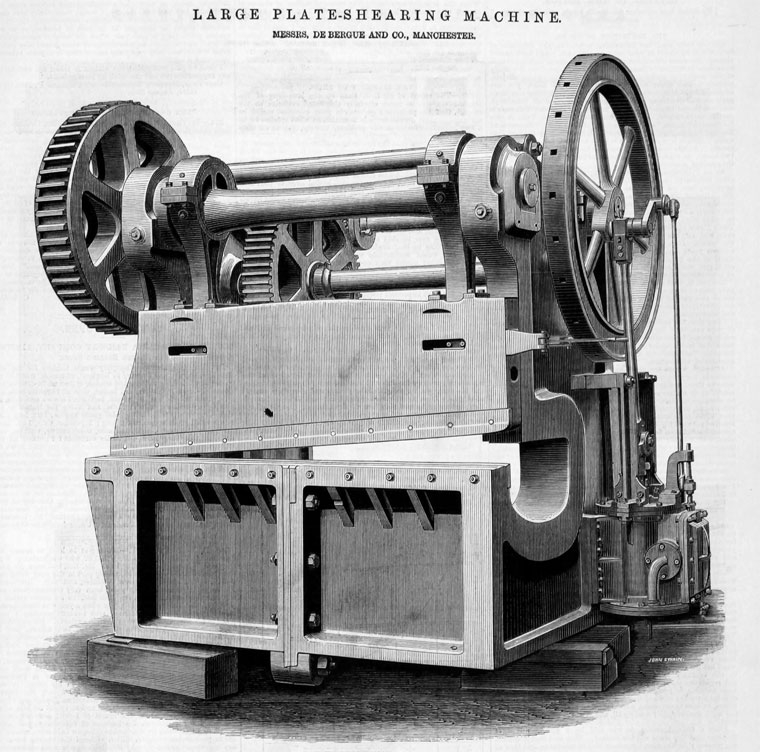 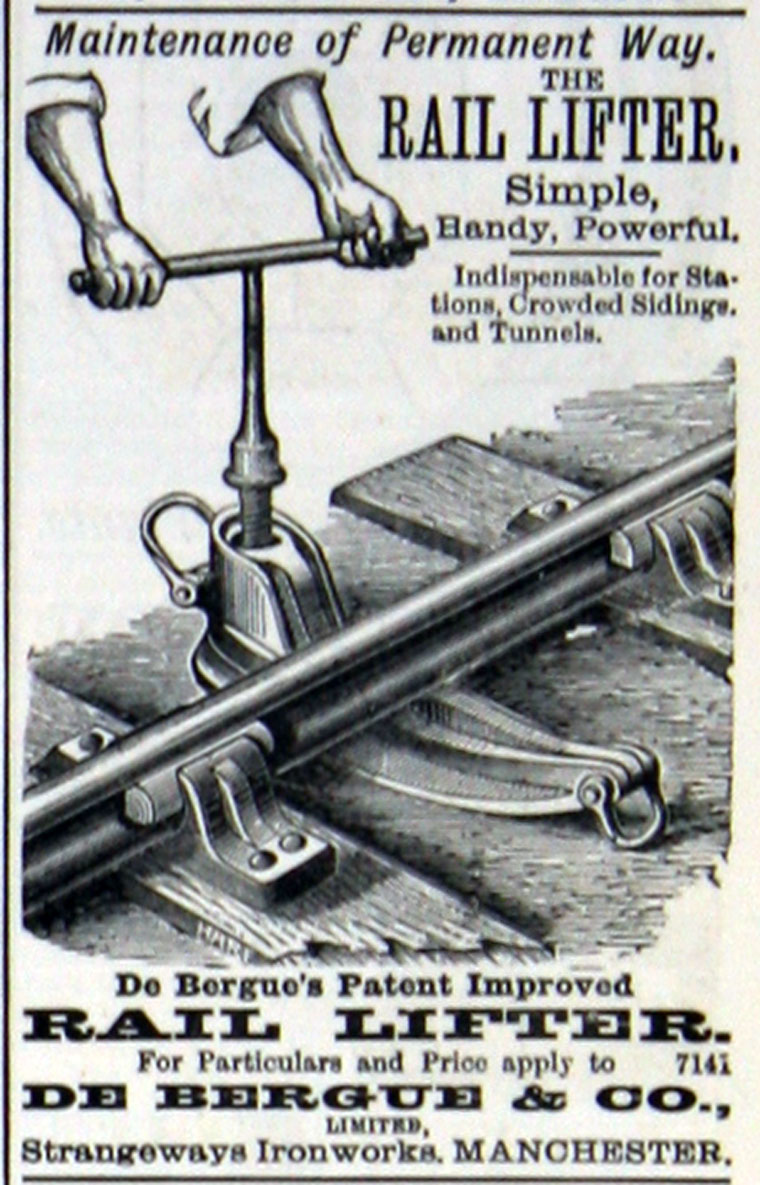 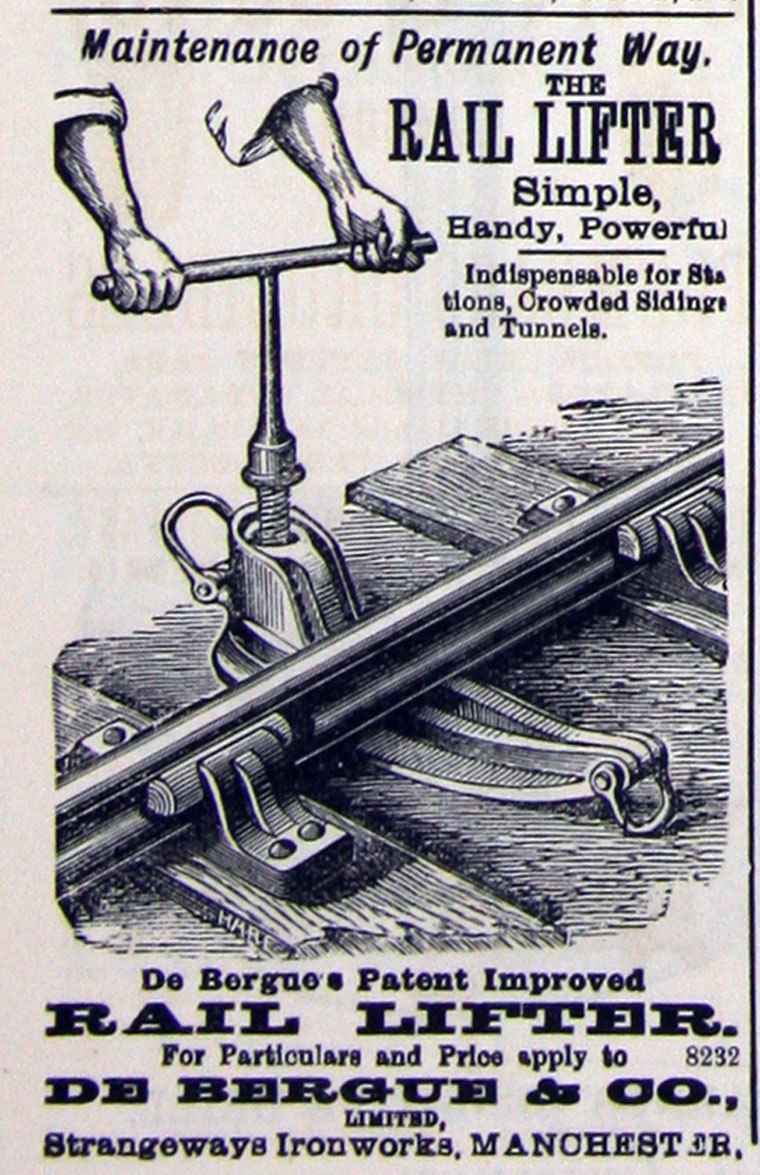 1892. Iron bridge in the centre of Hebden Bridge, Yorkshire. 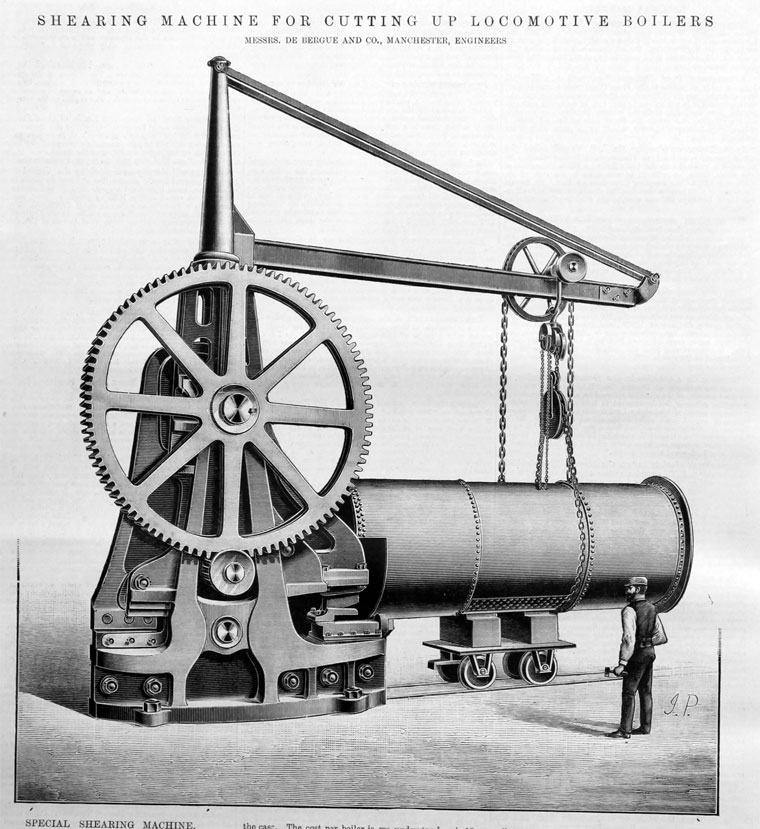 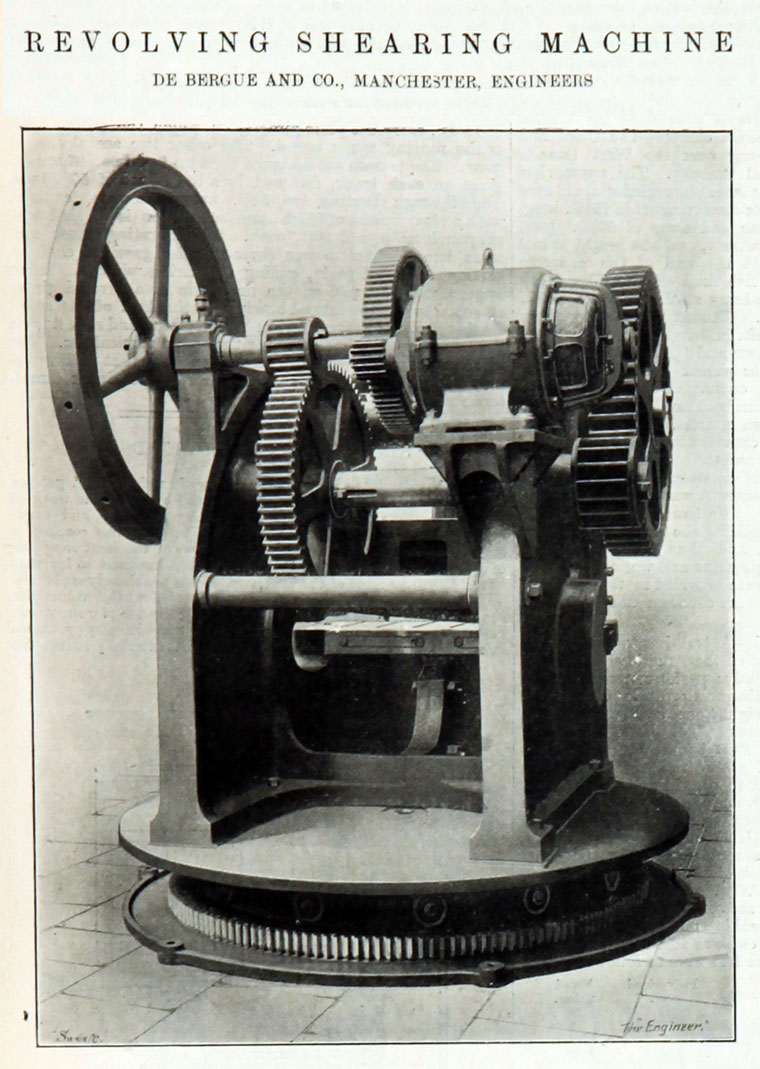 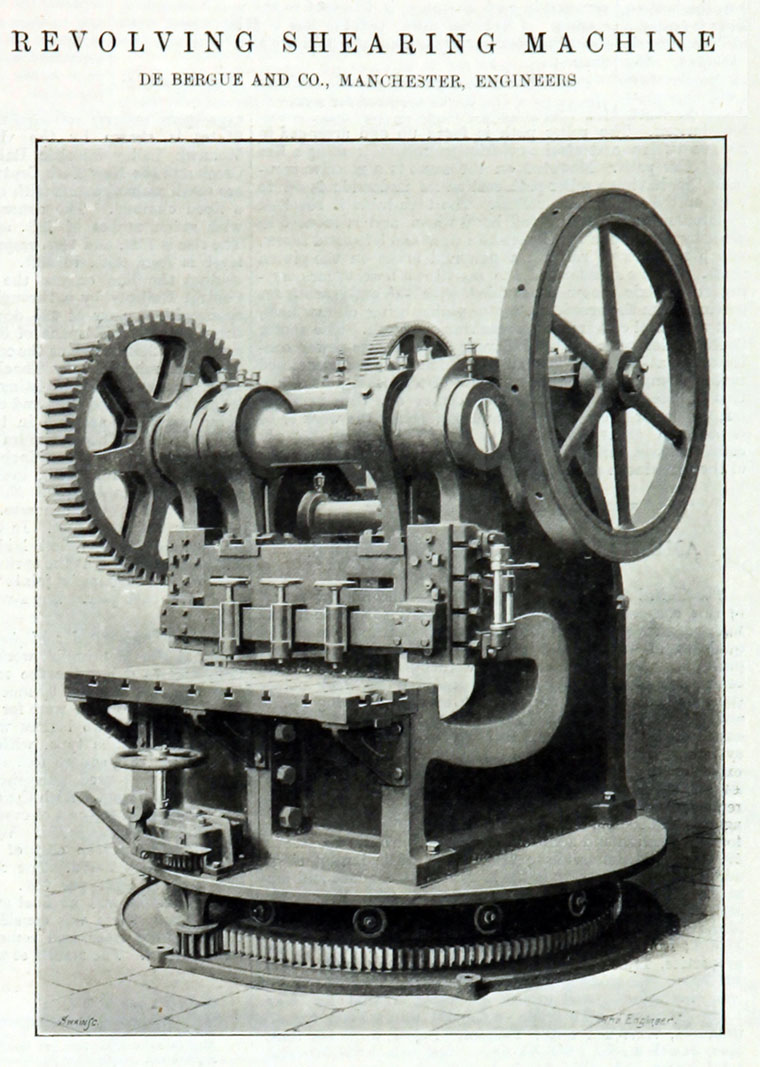 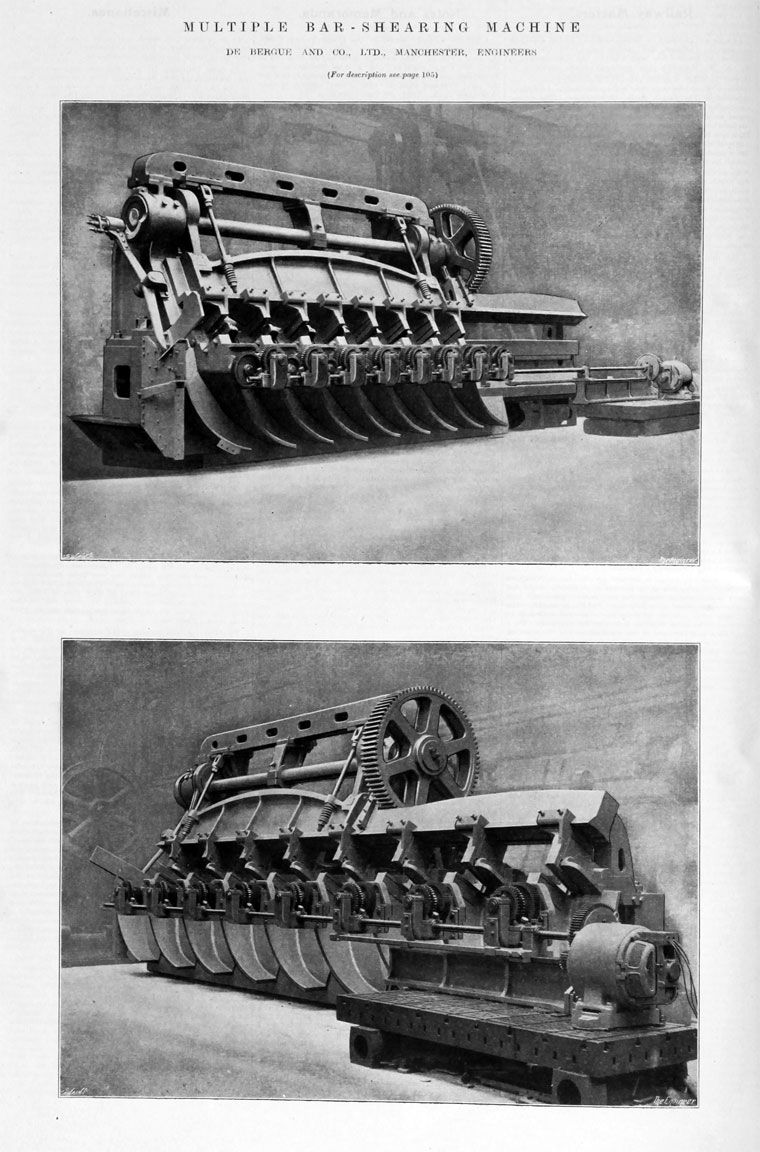 Engineers and contractors of Manchester (1850), of Mary Street, Cheetham, and 10 Strand, London. Makers of punching, shearing, riveting, and rivet-making machines, and steam hammers.

1850 Charles Louis Aime de Bergue built engineering works at Manchester, and engaged to construct the railway from Barcelona to Tarragona; he also invented a useful carriage for laying the same with perfect exactitude.

1850 Patent reed manufacturers of vulcanised rubber, and of buffers and bearing springs for railway and other carriages.

Adshead's 1851 Maps of Manchester Map No. 7 shows 'C. De Bergue Reed Manufactory' in central Manchester, bounded by Silver Street, Abingdon Street, David Street and by commercial premises extending to Major Street. De Bergue's works had a ground area of approx 40 ft by by 90 ft. Despite the date of the map, this location may have preceded the move to Cheetham, since Mary Street was the company's final address.

1861 Advert: 'REED MANUFACTURERS, STRANGEWAYS, MANCHESTER.
MANUFACTORIES IN FRANCE SINCE 1828
ESTABLISHED IN ENGLAND 1839
S. DE BERGUE,
Manufacturers of all kinds of Slays by Steam Machinery, for Weaving Silk, Cotton, Elastic Webbing, and other Goods,
RESPECTFULLY inform the Manufacturers and Weavers the City of Coventry and surrounding Districts, that in addition to their MANCHESTER SLAY, so well known and extensively used, they are now prepared to SUPPLY, a short notice, ALL KINDS OF SOLDERED SLAYS, such as are made at their Continental Establishment, and in general use at BASLE, ST. ETIENNE, and LYONS.
ORDERS FORWARD To A. LESTER, 38, VICTORIA-STREET,
Who is appointed SOLE AGENT FOR COVENTRY and DISTRICT, will be attended to with dispatch.' [2]

1861 De Bergue built works at Wauntreoda/Gwaun-tre-Oda (Cardiff), entering extensively into bridge-building. The 1875/1879 25" O.S. map shows the 'Gwaun-tre-Oda Engineering Works' in an area of fields, a short distance north of the village of Llandaff Yard and immediately south of the Taff Vale Railway line.

1871 Awarded a contract for the original Tay Bridge, for which they established a foundry at Wormit. Charles De Bergue became increasingly ill and died in April 1873. His family tried to continue, but found the financial position untenable. Their contract was taken over by Hopkins, Gilkes and Co. A condition was that they should take over De Bergue's staff (including the site manager, Albert Groethe) and the equipment. [4]

1875 'On Saturday, at the works of Messrs. De Bergue and Co., engineers, Strangeways, Manchester, as a casting weighing several tons was being raised by means of a hoist, the chain broke and a man named Edmeston received such injuries that he died in a few minutes.'[7]

1879 'Probable Closing of the Wauntreoda Works - 'We regret to hear that Messrs. de Bergue and Co., of Manchester, intend closing their branch establishment known as Wauntreoda Works, near Llandaff, as soon as orders which they have now in hand are completed. The works in question, which have been in operation some 18 years, and comprise plant estimated at £30,000, employ about 100 men in boiler-making, who will, in consequence of the determination of the company, be thrown out of work.'[8]

1880 Made wrought iron bridges for Colne and Methley. Made a bridge to take Trinity Street over the railway lines at Bolton Station.[9]

1882 Constructed a large single web plate girder for the extension of the L&YR station at Stalybridge. The girder has a length of 130 feet, with a uniform height of 9 feet, and runs up to eleven plates in thickness in the centre.[10]

1883 ' ENGINEERING WORKS.
TO BE SOLD by PRIVATE CONTRACT, the BRANCH WORKS at CARDIFF of De BERGUE and CO., LIMITED, consisting of Erecting Sheds, Smiths' and Machine Shops, Gas Works, Siding, &c; the whole occupying about 2 1/2 acres of ground, with good water supply. The Works are complete with Steam Engine, Boiler, Shafting, Smiths' Fires, Furnaces, Cranes, Punching, Shearing, Planing, Riveting, Turning, aud other Tools, suitable for the business of a Boiler and Girder Maker, or General Enginecring Business, one of the Shops being suitable for conversion into an Iron Foundry. The Works are connected by a Siding with the Taff Vale Railway, and will be sold either with or without the Ten Workmen's Cottages, and two Lodging Houses adjoining.
The Works and Buildings afford very ample covered space, but have been designed and built with a strict regard to economy, and can now be acquired, ready for immediate work, for very moderate outlay. Application to be made to De BERGUE and Co., Limited, Strangeways Ironworks, Manchester; or to Mr J. A., JACKSON, Swiss Chambers, Crockherbtown, Cardiff.'[12]

1883 'THE COLLEGE IRON WORKS, LLANDAFF.
It is rumoured that a Swansea tinplate manufacturer has purchased, or is about to purchase, these works, and contemplates restarting them very shortly. Preparations for a start will be commenced in a week or ten days' time, and as soon as the necessary repairs have been accomplished the works will in be in full swing. Mr Williams, the late owner, paid a visit to the works on Thursday, and made a thorough inspection of each department. When it became known that the works had changed hands, and were again to be restarted, the inhabitants of the Freehold and Llandaff Yard were in an ecstacy of delight, for when the works stopped, as well as the engineering wcrks of Messrs de Bergue and Co., quite a gloom was cast over the neighbourhood, and many were obliged to seek a livelihood elsewhere. With the restarting of these works a bright future is in store for the Freehold and the contiguous hamlets, as when every department is kept going a large number of hands are employed.'[13]

1915 In order to finance the remodelling and extension of the works, and provide the additional working capital needed for the increased business, the company was wound up and a new company formed under the same name to take over the business of the original company.

1946 '£87,100 JUDGMENT FOR MINISTRY
Judgment for £87,100 in favour of the Minister of Supply against De Bergue, Ltd., Strangeways Ironworks, Manchester, was given in the King's Bench Division to-day. The money was stated to be the difference between the prices charged by De Bergue. Ltd., for rivets supplied to aircraft manufacturers from November 1940 to March 1942, and the prices fixed under an agreed formula.
De Bergue, Ltd., denied liability, and contended they were entitled to deduct from any sum due a reasonable reward for the use of their patents.
Mr Justice Wrottesley allowed 2 1/2 per cent. interest on the £87,100 from the date of the writ —January 12, 1942. He refused stay of execution.'[16]