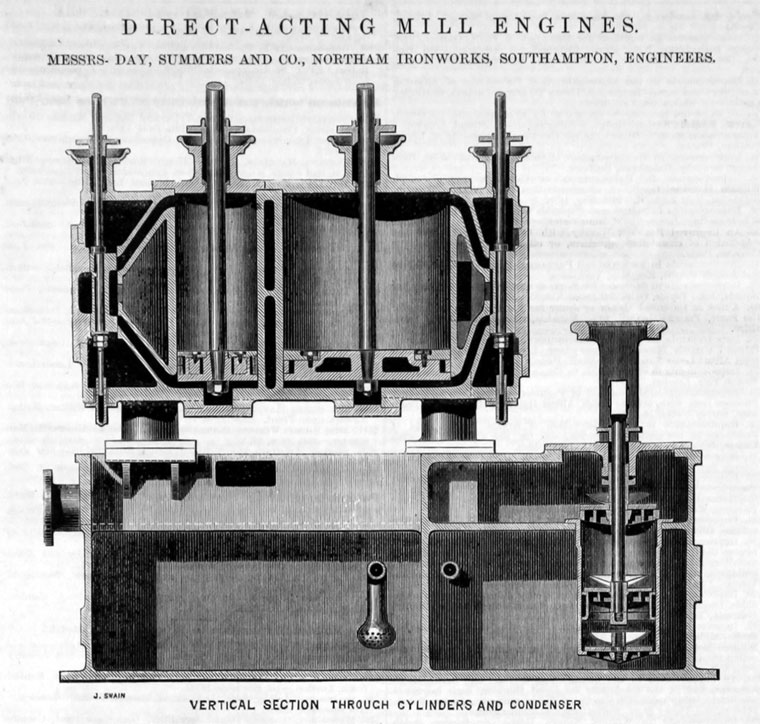 1897. Floating Bridge for The River Itchen.

Day, Summers and Co of Southampton were shipbuilders and makers of steam engines for marine use.

1834 The firm was founded by William Alltoft Summers in conjunction with Charles Arthur Day and William Baldock, under the title of Summers, Day, and Baldock at Millbrook.

Summers, Groves and Day was also established about this time

By 1843 Summers and Day was a partnership of William Alltoft Summers and Charles Arthur Day at the Northam Ironworks [1]. Thomas Summers, cousin of Alltoft, joined the firm.

1845 Partnership - Groves leaves. '...the Copartnership heretofore subsisting between us the undersigned, William Alltoft Summers, John Thomas Groves, and Charles Arthur Day, all of Milbrook, in the county of Southampton, and also of Northam, in the town and county of the town of Southampton, Engineers, Millwrights, Iron Founders, and General Dealers, carrying on business under the style or firm of Summers, Groves, and Day, was this day dissolved by mutual consent (so far only as respects the said John Thomas Groves)...'[2]

Initially established a reputation as a builder of large mail steamers in the 1850s up to the 1870s when the North-east Coast and Clydeside yards took over that market.

1854 Partnership - Baldock leaves. '....the Partnership between the undersigned, William Alltoft Summers, Charles Arthur Day, and William Baldock, in the trades or businesses of Engineers, Millwrights, Ironfounders, and General Dealers, at Northam, in the parish of Saint Mary, in the town and county of the town of Southampton, and elsewhere, under the firm of Summers, Day, and Baldock, was this day dissolved by mutual consent, to take effect as on and from the 31st day of May last; and in future the said trades or businesses will be carried on by the said William Alltoft Summers and Charles Arthur Day, on their own joint account...'[3]

At some point became C. A. Day and Co.

1871 Thomas Summers became a partner with Charles Arthur Day and the firm became Day, Summers and Co; the company developed compound steam engines which became a main line of its business.

1870s The yard won orders from P and O for mail steamers, this was followed by similar orders from Royal Mail Line and then a series of re-engining orders. The yard then concentrated on building paddle steamers, coasters, yachts, Itchen floating chain bridges, Hythe ferries and sheerlegs.

1880s The yard forged a good reputation for its steam yachts.

1890 Engine for River Itchen Floating Bridge 'Vessel No 8' at Woolston.

1898 Designed the steam yacht Sunflower for Mr. Walter Greene, of Nether Hall; the boats were supplied by Messrs Summers and Payne.[8]

1911 100-ton Sheer legs for Aberdeen. Powered by electrical equipment from J. J.(?) Holmes and Co of Newcastle. Delivered and tested within 5 months of date of order. This was the 89th set of sheer legs built by the firm, and the second for Aberdeen (see 1874 above).[11]

1920 Took over the contract to build British Kromhout marine oil engines from Plenty and Co. [12]

1928 The yard continued with the above building programme until 1928 when it went into liquidation. It was taken over by Thornycroft.