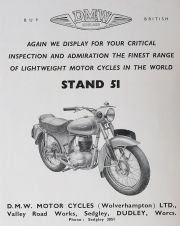 1942 The company was started by William Leslie 'Smokey' Dawson, who ran a small motorcycle business and began making rear suspension systems in 1942.

Leslie Dawson made a number of significant contributions to motorcycle design. Some of his inventions can be seen in his following patents:

Before the Second World War the company had been briefly linked to the Calthorpe name, as they were already in the motorcycle business.

1950 Production began when their Valley Road Works was located in Sedgley, Worcestershire. Throughout their years of production, they used mainly Villiers engines. The first range had the options of 99cc 1F, 122cc 10D or 197cc 6E units and all had MP telescopic forks, also produced by the firm. Plunger rear-suspension was an option on the two larger models.

1951 Two De Luxe models were added to the range. These had square-section tubing frames. After that year the 99cc model was dropped.

1952 A 197cc Competition model was added and from then on both round and square tubing was used for the frames. In later years, sheet steel was also used.

1953 The market was surprised by the introduction of 125cc and 170cc ohv units from AMC. These were French engines from Ateliers de Mécanique du Centre and not from the British company based at Plumstead. Then followed two further models - a 249cc ohc version and a 125cc dohc racing model known as the Hornet. This French connection did not last long and DMW had soon produced a range of two-strokes that included not only the road machines, but scrambles and trials models as well. The 147cc 29C engine Leda and the 224cc 1H engine Cortina were also added. Competition models became less like road bikes and more purprose-built.

1958 The 249cc 2T twin engine, used in the Dolomite was fitted to a scrambles model.

1961 The new 249cc 2T engine Deemster was launched. It combined scooter with motorcycle; weather protection with good handling. The rest of the range continued.

1962 After many improvements to the range, rationalization occurred when DMW took over Ambassador.

1963 A new competition model was launched. This was the Hornet road racer with a 247cc Starmaker engine. Later on, the firm built a 500cc twin using two of these engines, but that was strictly for themselves to run.

1966 The range shrank and the Deemster was built using a 247cc Velocette flat-twin, two-stroke engine, as well as the usual 2T.

1967 Only the Hornet racer and the Highland Trials models, using a Cotton frame and a 37A engine were produced. Although they continued to make parts and the occasional trials machine, the company effectively ceased trading.