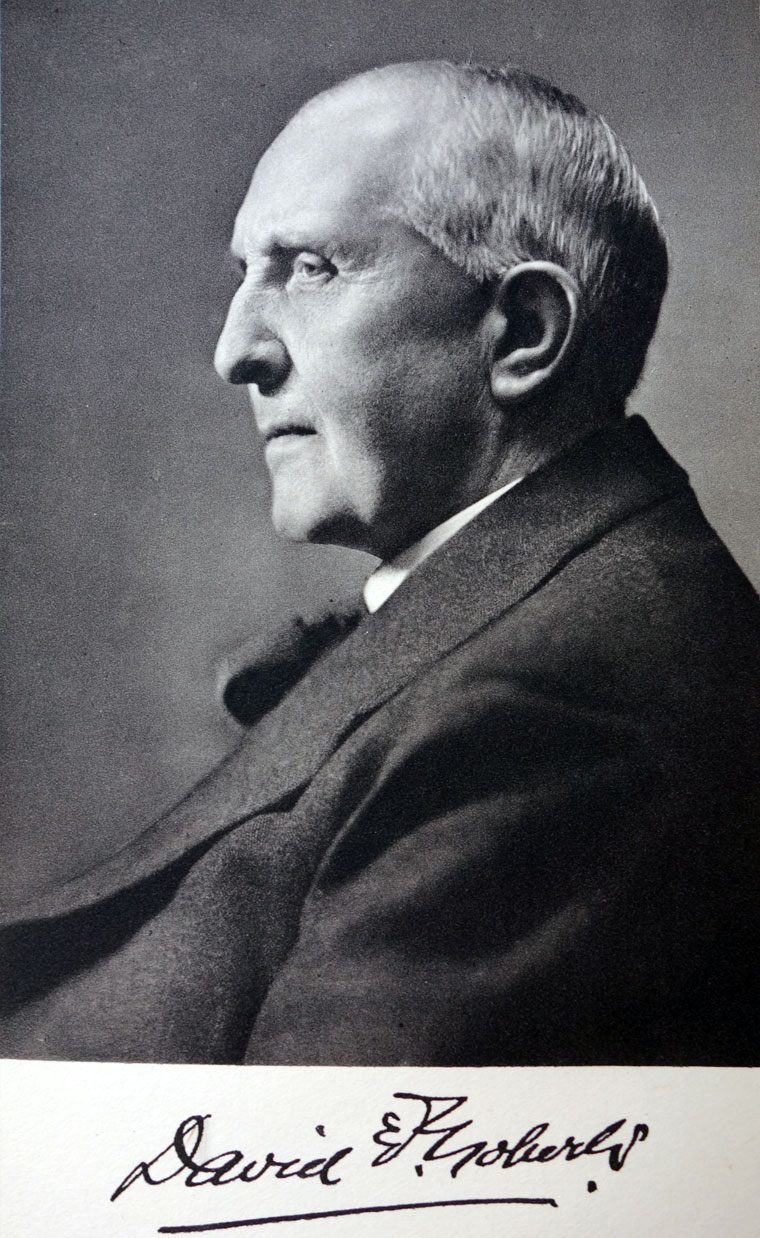 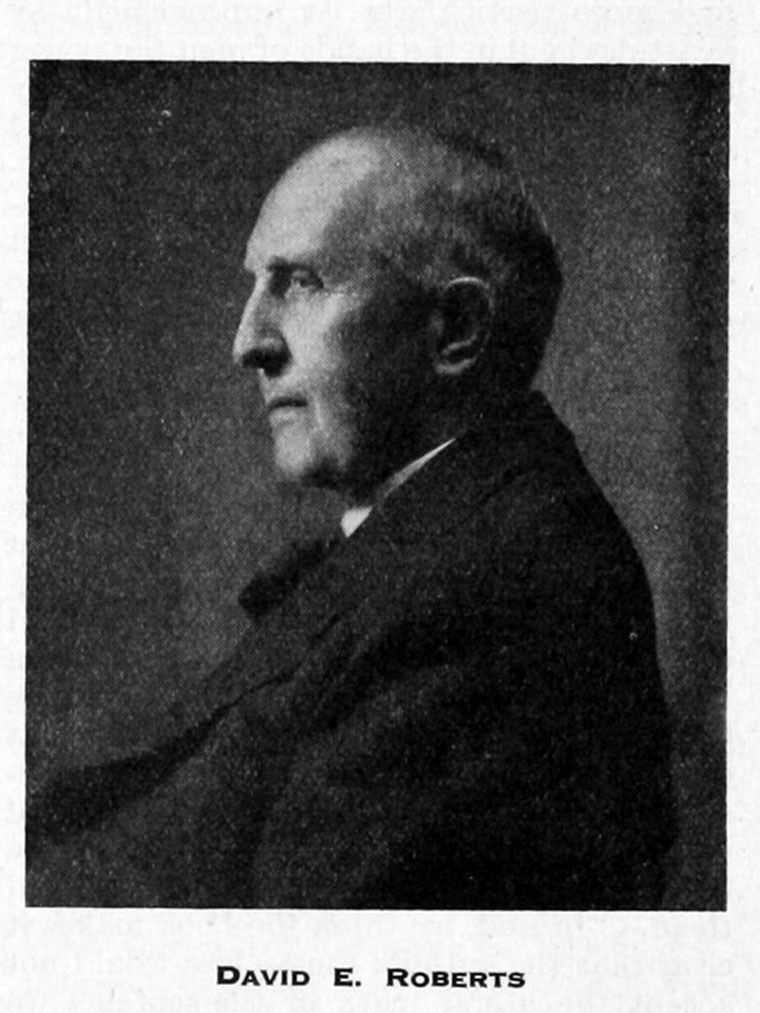 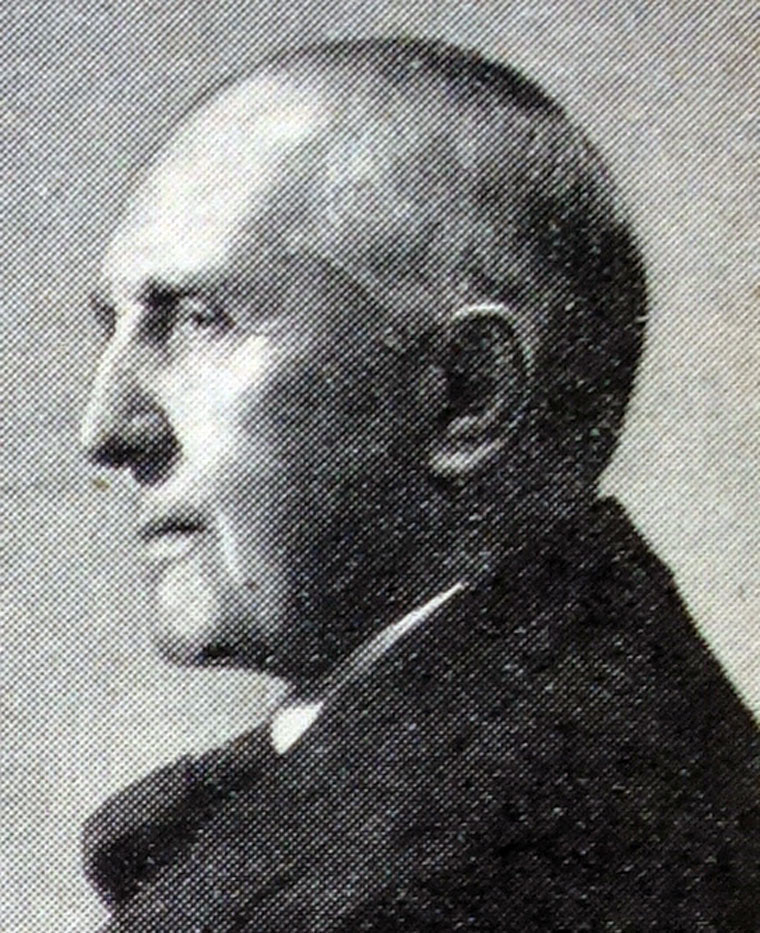 DAVID EVAN ROBERTS, a Past-President of the Institution, passed away at Cardiff on 21st July 1950 after a very short illness at the advanced age of eighty-three.

He was born at Merthyr Tydfil where his father was for many years manager of the old Plymouth Ironworks. Educated at Christ's College, Brecon, he was afterwards apprenticed to the engineering department of the Rhymney Iron Company, shortly afterwards becoming their chief draughtsman. He then returned to the Merthyr Tydfil area as assistant engineer of the steelworks section of the Dowlais Iron Company, a little later being promoted engineer of the department.

In 1902 he became chief engineer of the Dowlais Iron Company but soon afterwards left the company and set up in Cardiff as a consultant on ironworks and steelworks practice. This period was an extremely active one in the development of the art and practice of iron smelting and steel making, and David Roberts rapidly built up a world-wide clientele, his activities spreading to many parts of the world: in particular he was in close touch with the industry in the United States. He soon became leaders in his professional work.

During the first world war Mr. Roberts was attached to the iron and steel department of the Ministry of Munitions, and in particular he was closely associated with the control of the Cardiff National Shell Factory.

He was one of the oldest surviving members of the Institution, and in 1938 was elected to the Presidential Chair, his Presidential Address giving an admirable summary of the development of iron and steel manufacture during his professional life. His first contribution to the Institution goes back as far as 1906, when he gave a paper on the Development of Blast-furnace Blowing Engines. A Past-President of the South Wales Institute of Engineers, throughout his life he performed yeoman service to that society.

He was a Member of the Institution of Civil Engineers, the Institution of Electrical Engineers, and the Iron and Steel Institute. Throughout his life he took an active interest in Welsh national affairs, particularly as a Member of the Court of the National Museum of Wales, of which he was treasurer for the last ten years. He also served on the Court of Governors of the National Library of Wales. As a senior liveryman of the Worshipful Company of Blacksmiths, had he lived, he would have become Prime Master in 1950.

David Roberts had all the qualities which make for good fellowship, and enjoyed a very wide circle of friends. He will long be remembered by all who knew him. Throughout his long period of service with the Institution on the Council and on the Committee of the South Wales Branch he was actively associated with all current developments, and he had that supreme gift of endowing all with whom he came in contact with the same keenness which he himself displayed. All who served on the Council with him recognized in him a man of outstanding engineering knowledge and ability in his sphere of professional activities, possessing the twin qualities of statesmanship and leadership, and will always remember the atmosphere of goodwill which was created by his genial presence.

David Roberts belonged to a small group of Glamorganshire engineers who became world-famous for the work they did in developing the iron and steel industry, he himself following in the steps of another great Merthyr Tydfil engineer and iron master, the late Mr. Edward P. Martin who was President of the Institution in 1906.

"...David Evan Roberts was born at Merthyr Tydfil, where his father, the late Evan Roberts, was for many years manager of the old Plymouth Ironworks... [more]